In celebration of Halloween this month, we shine a spotlight on one of Tinseltown’s oldest and scariest attractions: Hollywood Forever Cemetery. The palm tree-lined graveyard in the land of make-believe and broken dreams even shares a wall next to the legendary Paramount Studios. Since 1899, the lush 60-acre lot has served as the final resting place of silver screen queens, hunky heartthrobs, movie moguls, and rock and roll royalty. And one more thing: it’s haunted.

The facility features the impressive (and spooky) Abbey of the Psalms Mausoleum, and hosts music concerts, outdoor screening of film classics. The site also stages the largest annual Dia de Muertos event in North America. Additionally, a wide range of feature films and T.V. shows have shot there, including Californication, 90210, and American Greed. Fittingly, the indie band The Kills used the cemetery for their killer music video, “Doing It To Death”.

So while you’re still among the living, ditch the lame tour bus and head instead to where everyone’s dead. P.S.: admission is free. 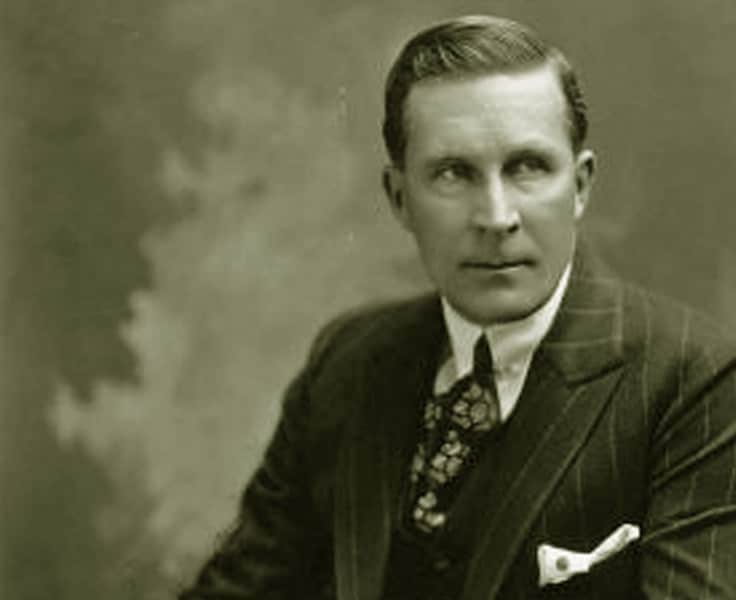 Glamour. Mystery. Drugs. Sex. The murder of famed silent film director and notorious playboy William Desmond Taylor had it all. On the morning of February 2, 1922, Taylor was found dead in his bungalow in the then-posh Westlake district of Los Angeles.

He had been shot in the back, most likely during the previous night, resulting in a massive investigation of yet another roaring ’20s sensational crime that dominated headlines for months.

A slew of Hollywood players would be questioned, including the director’s erstwhile girlfriend and cocaine addict, Mabel Normand. The popular leading actress, one of Taylor’s many conquests, had been the last person to see him alive on the evening of his murder. After an extensive interrogation, Los Angeles Police Department ruled her out as a suspect despite persistent accusations from scandal sheets of the day.

Unwanted attention also followed Mary Miles Minter. The blonde hair, blue-eyed nineteen-year-old ingenue had been in love with Taylor, and became another regular fixture in the frenzied tabloid fodder and the rumor mill. The same suspicion applied to her controlling stage mother, Charlotte Shelby, who just happened to own a .38-caliber pistol.

Ultimately, authorities were unable to establish any credible leads or produce the murder weapon and filed the case cold. Taylor’s family had his remains interred at Hollywood Forever, where over the years, several people associated with the scandal ended up. Then and now, they still ain’t talking.

But this isn’t where the story ends. Hardly. A muck-raking news reporter orchestrated the kind of publicity stunt that only could have occurred in La-La land. Florebel Muir, the Hollywood correspondent of the New York Daily News, attempted to out scoop her rivals with a half-baked plan involving Taylor’s butler, Henry Peavey.

Three days before Taylor’s murder, Peavey had been arrested for “social vagrancy” — and Muir hoped she could extract a murder confession out of him. Spoiler Alert: it didn’t work.

She paid a Chicago hoodlum named Al Weinshank to dress up as a ghost and hide near Taylor’s mausoleum at the cemetery. After luring Peavey to the gravesite, the two-bit spirit suddenly appeared in a white sheet and cried out, “I am the ghost of William Desmond Taylor! You murdered me! Confess, Peavy!”

Not surprisingly, the butler coughed up only a hearty laugh before giving the conspirators a piece of his mind. As for the ghost, Weinshank would later join the real dead after being gunned down in the 1929 St. Valentine’s Day Massacre.[1] 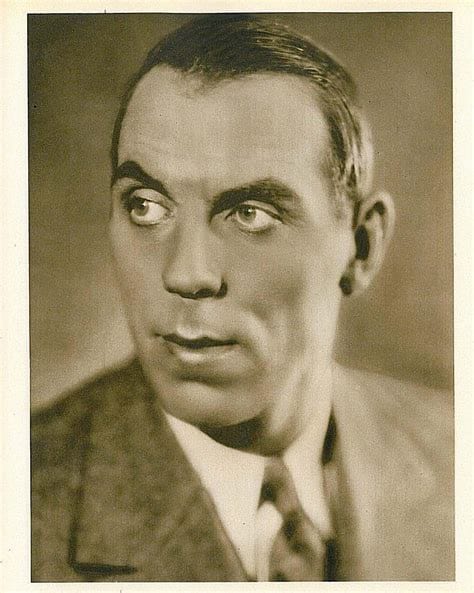 With the arrival of sound motion pictures in the late 1920s, many actors suddenly found themselves out of work. The transition from silent films to “talkies” were especially challenging for those with a thick foreign accent or a weak voice. While some stars plunged into obscurity, Karl Dane took a much darker path.

Originally from Denmark, Rasmus Karl Therkelsen Gottlieb landed at Ellis Island, NY in 1916 with $25 in his pocket. He toiled as a factory worker, carpenter, and a mechanic before stumbling into show business — a stroke of luck that would change his life. He soon changed his name and traveled to California, where he began working in silent pictures.

His first big break came in 1924 with the movie, The Big Parade with John Gilbert and Renee Adoree. The film became a box office smash and thrust Dane into stardom. He then appeared with Valentino in The Son of The Sheik that was released shortly after the heartthrob’s death in 1926.

Dane began earning $1500 a week (over $20,000 today), starring in several comedies. But in a few years “talkies” would change everything — and by the early 1930s, he struggled to find even bit parts. Eventually, “The Great Dane” committed suicide, dying from a gunshot wound to the head.[2]

3 The Lady In Black 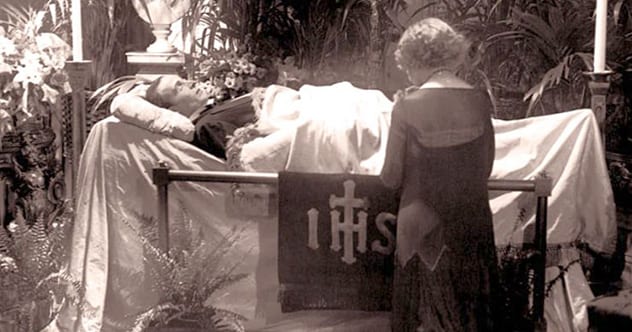 Over a century after first landing in Hollywood, the man known as Valentino remains firmly planted in pop culture as an enduring icon. When he died in 1926 at the age of 31, his legion of female fans mourned worldwide. One of his admirers, however, vowed never to leave his side and came to be known as “The Lady in Black”.

From humble origins as a taxi dancer after immigrating to America from Italy, Valentino captivated audiences with his smoldering sex appeal and gravitas, creating phenomena never seen before. Movies such as The Four Horsemen of the Apocalypse, The Sheik, and Blood and Sand firmly established the “Latin Lover” as an international sex symbol.?

While in New York to attend the premiere of his last film, he collapsed in his hotel on August 15, 1926. The great Valentino died eight days later from complications of a ruptured ulcer. An estimated crowd of 80,000 people lined the streets of Manhattan to pay their respects and nearly caused a riot. His body was then transported by train to California — and that’s when things got weird.

Recent financial troubles had left his estate in shambles despite earning $10,000-per-week (at a time when most people made around $2,000 a year). As a result, Valentino’s remains were laid to rest in a borrowed crypt from his friend, June Mathis. Then on the anniversary of his death in 1927, a mysterious veiled woman clad entirely black left roses at the star’s final resting place before vanishing.

Every year, she would return, repeating the same ritual while creating intrigue of her identity. Was she a former lover? An obsessed fan? Regardless, the mystery continues today for all to contemplate — and possibly even witness a rare glimpse of the infamous “Lady in Black.”[3] 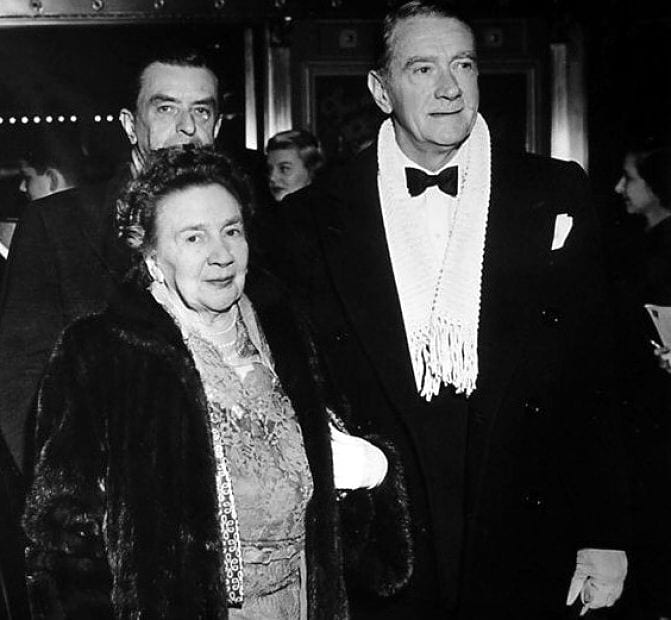 Actor Clifton Webb, a two-time Oscar nominee, is best remembered for his supporting roles in films such as Laura and The Razor’s Edge, and the first to portray the character “Mr. Belverdere.” But to the paranormal community, Webb receives top billing as a man who not only saw ghosts and lived with a ghost — but even became one himself.

Born on November 19, 1889, in Indianapolis, Webb Parmelee Hollenbeck began his career in showbiz as a ballroom dancer. He later appeared on Broadway under his newly adopted stage name and starred a string of successful musicals as well as comedic plays by his good friend, Noel Coward.

He went on to achieve movie stardom in his mid-50s, playing obsessively well-dressed, pedantic characters that never strayed too far from his vibrant personality. At a time when studios demanded that artists keep their sexuality closeted, Webb never hid that the fact that he was gay. His wit and charm also made him a popular figure on the Hollywood party circuit and as a host of lavish gala affairs.

Additionally, throughout his adult life, he lived exclusively with his overbearing mother, Maybelle, who accompanied him everywhere — including the afterlife. Not long after she died in 1959, Webb claimed Maybelle often appeared in the form of an apparition at their plush Rexford Drive mansion in Beverly Hills. However, she wasn’t the only one.

Webb, an insomniac, told friends that he’d seen the ghost of Grace Moore, a famous opera singer, who once lived at the house prior to a fatal plane crash in 1947. And then shortly before his death in 1966, Webb predicted he would never leave the beloved home. Ever.

Subsequent owners of the property reported seeing the shadowy appearance a couple dancing near the front entrance. Sadly, the Rexford Drive house would be torn down in 1982, causing the Webbs to take up residence elsewhere. But not just anywhere. Visitors at Hollywood Forever have reported seeing a dapper, ghostly figure pacing up and down the long marble corridor of the Abbey of the Psalms Mausoleum. There, near the crypt Clifton shares with his mother, the actor remains in search of a good night’s slumber.[4]

1 Scandal of the Century 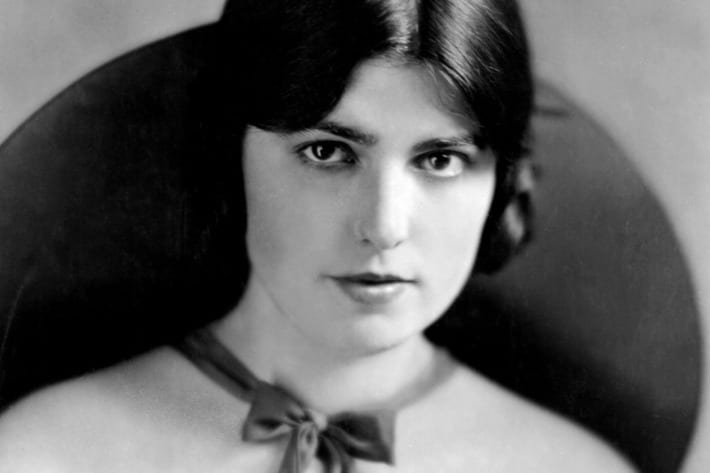 Since the birth of the movie industry, countless young women (and men) have flocked to California from all over the world with hopes of achieving fame and fortune. Chicago-born beauty Virginia Rappe was one of them.

The brunette fashion model managed to land a handful of roles before her career took a fatal turn. On September 5, 1921, Rappe attended a party at the elegant Saint Francis Hotel in San Francisco to honor the popular comedian Roscoe “Fatty” Arbuckle.

The portly funnyman had recently signed a lucrative contract with Paramount Pictures, making him the highest-paid actor in Hollywood. Despite Prohibition, bootleg booze flowed freely throughout the raucous evening.

At some point during the celebration, Rappe became ill and rested inside Arbuckle’s suite. Witnesses recall seeing her suffering in agonizing pain as her condition continued to worsen. She died a few days later at the age of 26. A massive scandal ensued, alleging Arbuckle had violently raped her and caused her bladder to rupture.

Three sensational trials followed, creating a media circus fuelled by an outage public. The first two proceedings ended in hung juries before a panel found Arbuckley not guilty. His career, however, never recovered. In 1933, he attempted a comeback with Warner Brothers Studios to star in a series of comedies but died from a heart attack shortly before shooting began.

Over the years, the sounds of a sobbing woman have been heard around Rappe’s gravesite at Hollywood Forever. Perhaps her spirit continues to lament over a career ruined — or to paraphrase Raymond Chandler, the cold chill felt then and now, serves as a reminder that L.A. is a town where the angels left a long time ago.[5]

For more spooky graveyard and death related lists check out 10 Graveyards Supposedly Haunted By Vampires, and 10 Creepy Things Bodies Can Do After Death.

About The Author: Christopher Warner is an actor and freelance writer. His articles have appeared in several magazines and websites across multiple genres, including Military History Matters, Portland Monthly, WWII Quarterly, Nostalgia Digest, and Aviation History.