The thought of discovering something valuable or history-changing is the dream of all metal detectorists (and probably most of us too!) The ground is filled with treasures and artifacts that are just waiting to be unearthed and the ten amazing cases below serve to illustrate just how thrilling these finds can be. So read the list, add a comment, then buy a metal detector and get hunting! 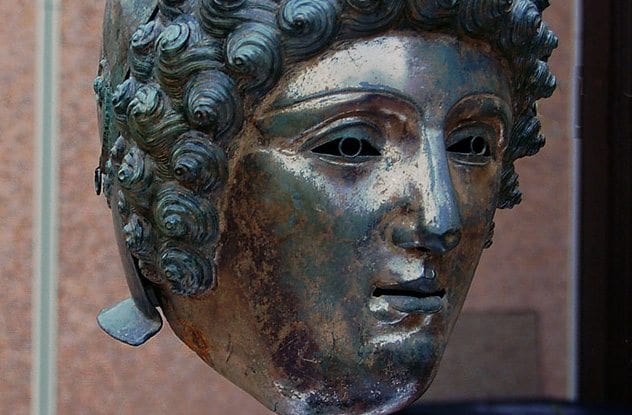 A metal detectorist made a remarkable find in an English field: dozens of pieces of an 1,800-year-old helmet. He brought the fragments to an auction house, and they spent over 200 hours repairing the helmet.

It was worth the effort; the finished piece was stunning. The helmet featured a face mask that displayed a classically beautiful Roman face. The mask was attached to a bronzed cap, which was topped by a griffin crest.

This was not a helmet of war. Instead, it was worn by Roman cavalrymen during tournaments. They used these events to practice their skills and show off to their countryman. Soldiers would wear extravagant clothes and armor and reenact famous battles.

The helmet is one of only three of its kind discovered in Britain. Many people were clamoring to buy it. It sold for £2.3 million ($3.6 million), 10 times its estimated value. 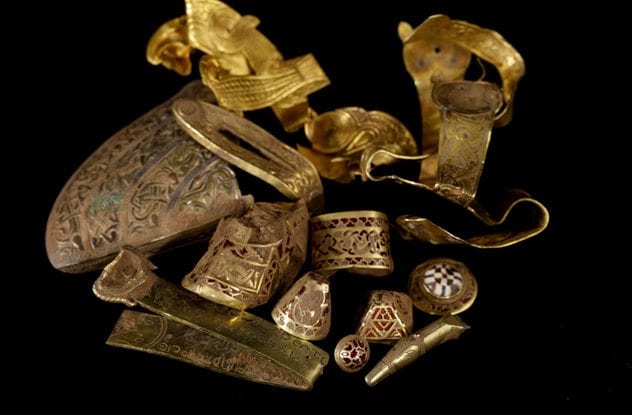 Metal detector enthusiast Terry Herbert was down on his luck. He asked a farmer friend if he could scan his field to find a few coins. Within days, he had discovered more than 10 pounds of treasure. This piqued the interest of local archaeologists, who decided to investigate the field themselves. They discovered more than 4,000 fragments of seventh-century artifacts.

After archaeologists pieced together all of the fragments, they saw that they had hundreds of completed items. Most of the treasure was warlike: sword decorations and helmets. The only non-martial pieces were three religious objects: two crosses and an engraved Bible verse.

Archaeologists were unsure why the hoard was buried. Some believed that the artifacts were booty captured during battles; the victors would have buried the loot for safe keeping. Others believed that the hoard represented an offering to the gods. Many of the objects were bent or broken before they were buried. This was a custom of Germanic tribes: They would break or “kill” the weapons before they buried them so that they would be sent to the gods in the spirit world.

This was the largest collection of Anglo-Saxon gold and silver metalwork ever found. Local museums purchased the treasure for £3,285,000 ($5.3 million). 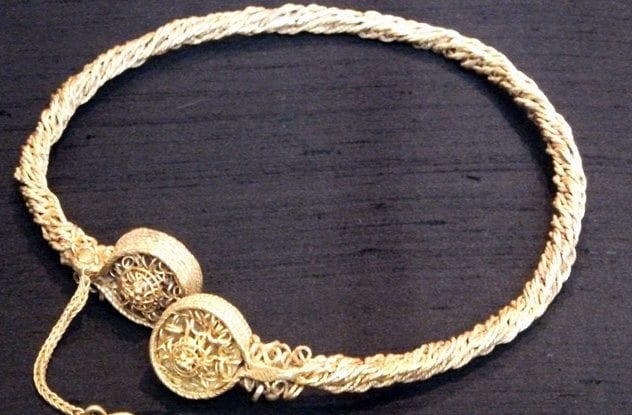 David Booth decided to start using a metal detector to get some fresh air. The first time he used it, he struck gold. He discovered four torcs (necklaces) just six inches beneath the ground. Historians said that this was one of the most important hoards ever found in Scotland.

All of the torcs were made between 300 and 100 BC. There were multiple styles represented in the find, which was highly unusual. Two of the torcs were designed in the local Scottish style, one was fashioned in a French style, and one was created in a Mediterranean style.

Historians were particularity delighted with the Mediterranean-styled torc. It was the first torc found that combined two different styles. It had been made by a smith who learned his trade in the Mediterranean and then blended it with the local Scottish style. This find showed that Scottish tribes were more connected with each other and other Iron Age people in Europe than previously thought. 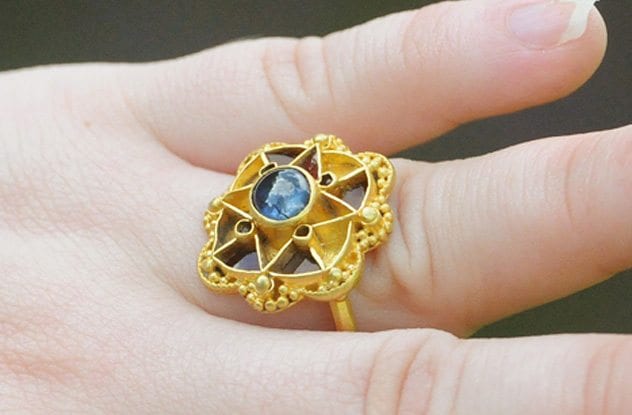 Michael Greenhorn had no idea that he had discovered a strange piece of history when he unearthed a sapphire ring. Made of gold, glass, and sapphire, the ring was exquisite and had clearly been made by a master craftsman. However, both the materials and the design of the ring were difficult to date. Nothing like it had been seen before.

Thirty experts gathered to try to understand the enigmatic piece. They discovered that the ring had been made in Europe during the fifth or sixth century, and it had belonged to a noble. The sapphire was older than the ring. It had been cut centuries earlier, and the ring had been had been created to display the sapphire. Historians still hope to better understand the technology used to create the high quality of the ring’s gold. 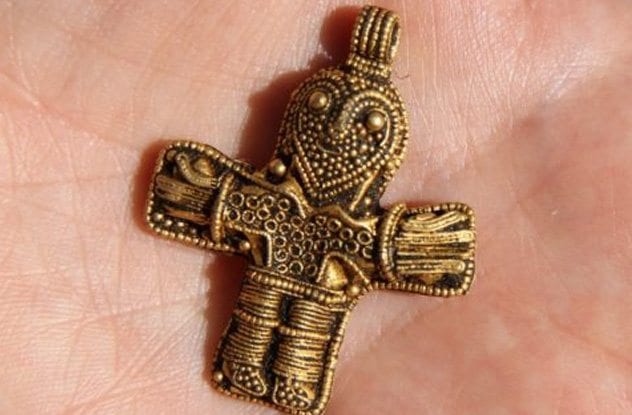 Dennis Fabricius Holm made an amazing discovery in a Danish field. He discovered an old golden cross, which depicted Jesus with arms outstretched. The cross was small, only 1.6 inches long. At first, Holm did not think that he had made a significant discovery. Then he posted a picture to Facebook, and friends encouraged him to take the cross to a museum.

The curator was delighted. The cross was from the first half of the 10th century, which made it one of the oldest crucifixes discovered in Denmark. It was also one of the most well-preserved Christian artifacts found in the country. The cross indicated that Danes could have embraced Christianity earlier than previously thought. 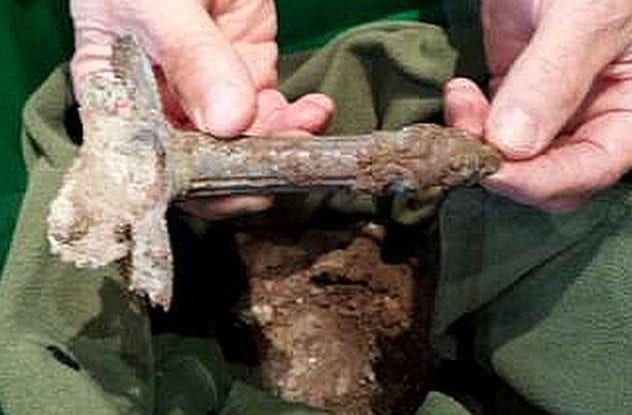 Treasure hunter Phil Kirk had once discovered a Roman coin in an English field, and he had a hunch that he would find more Roman artifacts there. He was right; he soon discovered a few jugs and a bronze dish. Kirk then contacted local experts and told them about his find. They decided to investigate the area themselves.

As they were digging, they found a bottle stuffed with cremated bone. They realized that they had discovered a wealthy burial. They also uncovered glass bottles and cups, an iron lamp, a small piece of lava, and a coin, which dated the grave to the early third century. However, the major find was two shattered mosaic glass dishes that were probably made in Alexandria, Egypt, shortly before they were buried.

This was not the first time that artifacts had been discovered in the field. In 1954, a farmer discovered Roman pottery, and in 2013, a large hole (later shown to be the remains of a Roman well) appeared. Now that they found the grave, archaeologists decided to look around the area. They discovered that the grave had neighbored a shrine or temple that had been attached to a villa. 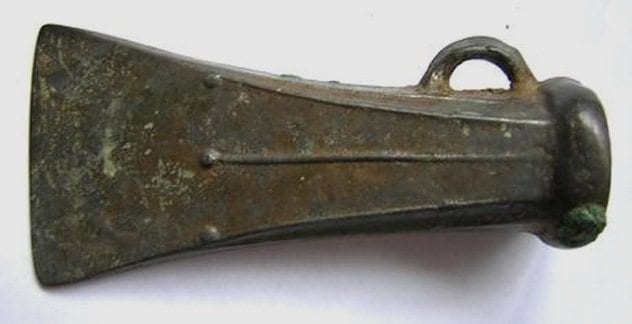 Tom Peirce had only been searching a field for a few minutes when his metal detector started to beep. He found an axe head buried 10 inches beneath the soil. He kept digging and found dozens more. The next day, he brought two friends to help him search the field. They discovered nearly 500 bronze artifacts including 268 complete axe heads and 152 incomplete axe heads. The axe heads were forged around 700 BC, and they were in a fantastic condition. This was one of the largest finds of its kind in Britain.

The surprising discovery about the axe heads was that they had never been used. Indeed, it is probable that they were never intended to be used. The axe heads were made with inferior metals that made them shiny but too brittle to use. This finding helped contribute to the theory that objects were buried as sacrifices to the gods. 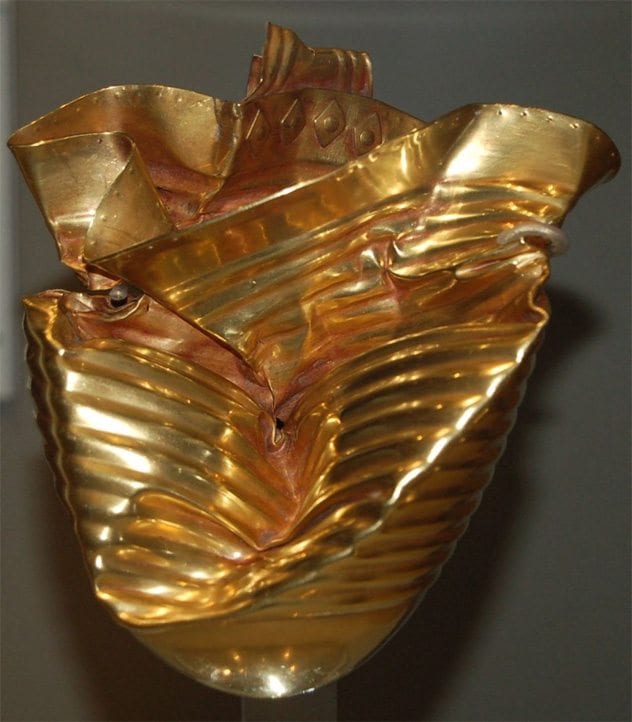 Cliff Bradshaw, an amateur treasure hunter, decided to re-search a wheat field in England. He had already discovered several seventh century artifacts there, and he hoped to find more. Bradshaw nearly missed the faint whine of his metal detector. He had to dig 18 inches before he found his treasure. He had discovered an ancient gold cup.

Historians were delighted with the find. The cup had been made between 1700 and 1500 BC. Though it had been crushed by farming equipment, the cup still displayed remarkable craftsmanship. It had been hammered from a single ingot of gold. This style was similar to five other cups found throughout mainland Europe. The find suggested that the people who lived there were in contact with mainland Europe centuries before the Romans arrived. 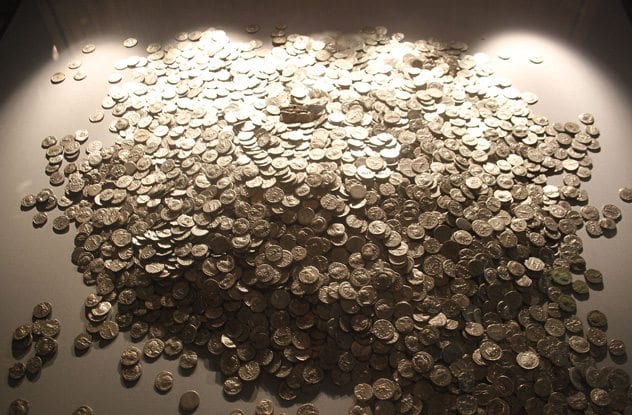 Martin Elliott was showing his cousin, Kevin, how to use a metal detector, when it started to beep. They had discovered a Roman coin. Within 30 minutes, they had discovered thousands. The final total was 9,212 silver denarii coins, the equivalent of pennies in Roman times. The coins were from the first century BC to the third century AD. Most of them were common; however, two of them had never been found in Britain before.

When archaeologists investigated the area, they made an important discovery. The field had once contained a major Roman complex. The coins had been buried 10 to 20 centimeters under a Roman villa. They probably represented the life-savings of the villa’s owner. 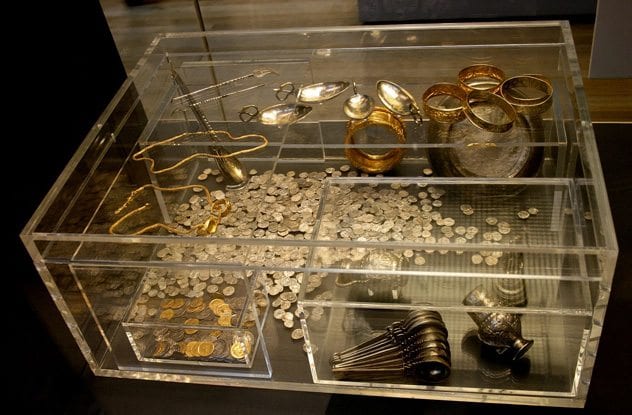 When Eric Lawes’s metal detector beeped, he thought he had simply found his friend’s lost hammer. Instead, he had discovered the find of a lifetime. He had unearthed silver spoons, gold jewelry, and many gold and silver coins. After he had filled two bags, he realized that the treasure should be excavated by experts, and he reported the find to his city council.

The next day, archaeologists hurried to the area. There, they discovered 7.7 pounds of gold and 52.4 pounds of silver. There were 14,865 Roman coins and 200 items of silver tableware and gold jewelry. They also found the missing hammer. The coins were used to date the hoard; it was buried no later than AD 450. The hoard was worth £1.75 million ($2.59 million).

The hoard had historical value as well. Many of the spoons were monogrammed with Christian symbols, which showed that the owners had held Christian beliefs. This added essential evidence for the importance of Christianity in late Roman Britain.

Experts are not certain why the hoard was buried. The most accepted reason is that a wealthy family needed to hide their wealth. Roman soldiers were leaving England for mainland Europe around the time the hoard was buried. This may have caused conflict in the area, and the owner of the treasure buried their valuables for safekeeping.