When we learn about ancient history, we usually hear about the kings and queens who lived lives of luxury in gilded palaces. The rest of it usually gets cut out.

For the poor, life was a bit different. In ancient China, everyday life for an average person meant living on a farm, eating cheap meals and struggling to survive. Life was dirty, hard, and short—and often truly disgusting.

10They Ate Eggs Soaked In A Little Boy’s Urine 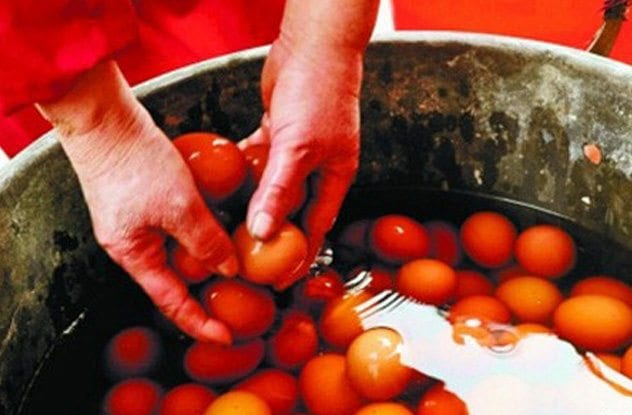 Ancient Chinese medicine was advanced. Chinese scholars had ideas that wouldn’t reach the West for thousands of years. But in the crude, early forms the ancient Chinese used, these treatments were a bit different, and a bit less appetizing. Like, for example, the ancient Chinese dish tongzi dan—or, in English, eggs boiled in a young boy’s urine.

The recipe calls for a few dozen eggs and a pot filled to the brim with the urine of prepubescent boys. For best results, the urine should come from boys no more than 10 years old.

Tongzi dan has been a staple food for so long that, in Dongyang, it’s registered as a part of their cultural heritage. It’s believed that they started eating them during a time of poverty, when the poor desperately need a way to keep eggs from going bad. In most parts of China, they dealt with that problem by boiling the eggs in tea, but the people Dongyang decided to do things a bit differently.

Today, it’s considered a part of Chinese medicine. Some people in Dongyang still eat these things, and vendors will even put buckets in primary schools to collect children’s pee. Even today, Chinese doctors claim that eating eggs soaked in urine works wonders to keep your body healthy.

Which might be true, but we’ll take our chances without it. 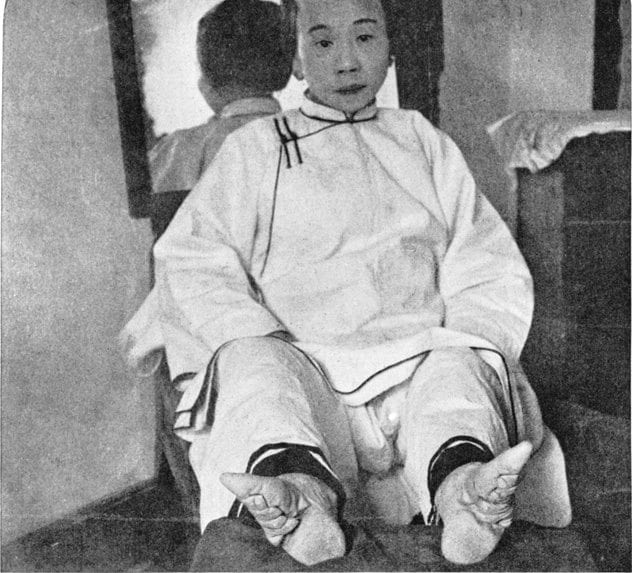 Chinese women, whether they were rich or poor, were encouraged to bind their feet as tightly as humanly possible. The goal was to keep your foot less than 4 inches long, which left it a crushed, mutilated mound of flesh they called a “lotus foot.” This wasn’t just something a few people did. At its peak, almost every upper-class woman and 50 percent of the lower class bound their feet.

The really weird part, though, is how the men felt about it. To ancient Chinese men, these deformed lotus feet were the sexiest things on earth. Foreplay, in ancient China, was meant to start with a man fondling his partner’s broken foot, and they put a lot of thought into it. During the Qing Dynasty, they even released a sex manual with 48 different ways to fondle a mutilated foot.

Horrifyingly, the practice of foot-binding appears to be re-emerging in modern China.

8The Everyday Battle Against Your Own Stench 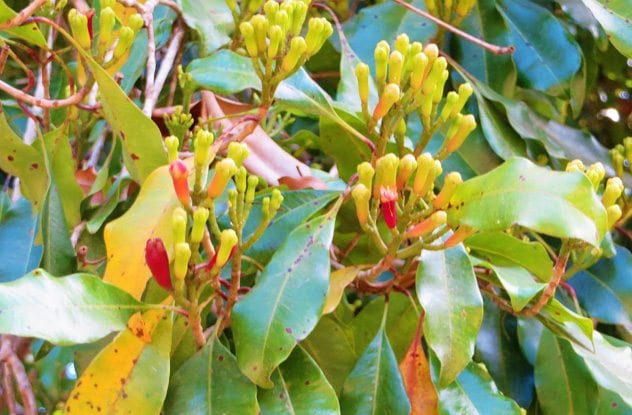 Smell was important in Ancient China. Body odor, they believed, was a sign of barbarism, and so the wealthy would go to great lengths to keep it off. Women would walk around with aromatic bags attached to their waists. When a man was in the presence of the emperor, he was required to suck on cloves to fight bad breath. In those times, so much of a Chinese noble’s paycheck went toward hygiene that they called it a “subsidy for clothing and hair washing.”

For the poor, though, the tricks just weren’t available. And so they resorted to some more desperate options. One ancient Chinese doctor, for example, recommended that, at least once each year, every person should wash their armpits with urine.

In the north part of China, however, people would go the whole winter without bathing, fearing that touching water in the cold would make them ill. The Taoists, meanwhile, barely bathed at all. They believed that bathing spread illness, and so, while Koreans were bathing twice a day, they were staying as far away from soap and water as humanly possible, because they didn’t want to be unclean.

7People Ate Their Own Lice 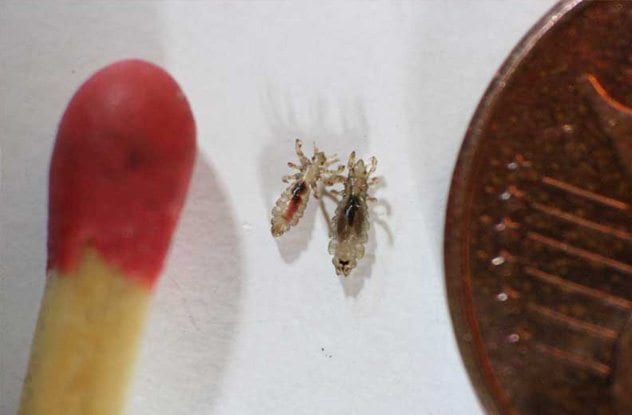 When a massive part of your country is afraid to bathe, it causes a few problems. And so it might not particularly surprising that ancient China was infested with lice.

Lice were so widespread that early Chinese doctors used them to make diagnoses. If the lice were crawling all over the patient’s body, an early Chinese medical document says, he will survive. If the lice are scrambling off his body like rats fleeing a sinking ship, he will die.

The poor were so used to being covered in lice that many would compulsively pluck them off their hair and eat them. This happened so much that they had remedies to help people who ate too much of their own lice. They would be fed ashes and boiled water from old combs. The next time you visited the bathroom, the doctors promised, you would pass a belly full of lice. 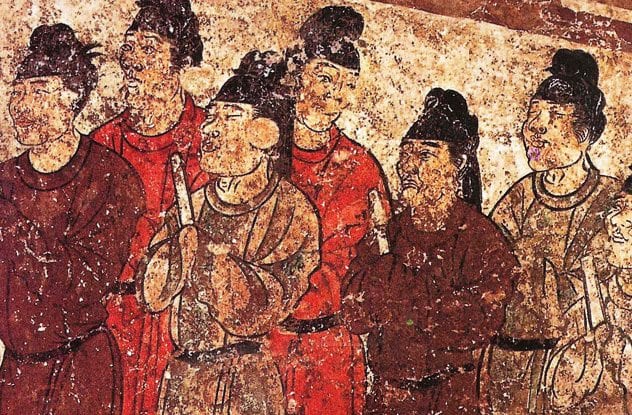 Being poor in the ancient world was rough. If it would get him a job in the palace, a Chinese peasant would willingly chop off his own penis.

Eunuchs, in ancient China, were allowed to work as servants to the emperor. For a poor person, that was the best shot at a better life you could have. A lot of parents would castrate their children at birth, but if your parents didn’t think ahead, it was a decent and fairly popular career move for a grown man to castrate himself.

Self-castration peaked during the Ming Dynasty. At one point, there were 100,000 eunuchs working across the country. So many people were castrating themselves that the government had to chase neutered, job-hungry men away from the palace.

Eventually, they set up an application process. For 200 copper coins, you could get your name on a list of eunuch applicants. 250 people on that list would get to work for the emperor, but that was out of thousands of applicants. Most of the men wouldn’t get the job. They would end up begging in the streets and would spend the rest of their lives knowing that they castrated themselves for nothing.

5They Pooped Into A Pigpen 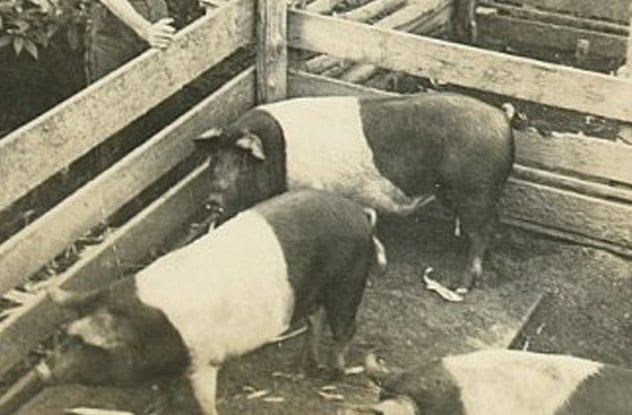 If nothing else, you certainly can’t accuse ancient Chinese farmers of being wasteful. They even made use of their poop.

Some farmers, in ancient China, relieved themselves in a special type of outhouse built over a pigpen. They would do their business and let it all fall into the pig’s trough, which, for one unlucky pig, would become the day’s hors d’oeuvres.

By 1000, the Chinese were using public toilets instead, and that led to a whole new market. Peasants would travel into the city to collect the public toilet’s treasures and bring it back as a cheap fertilizer.

This wasn’t just a minor business. Collecting from a public toilet was considered the fast track to wealth. At the time, there was an even a saying about it: “Treasure nightsoil as if it were gold.”

4They Were Pioneers In Medicinal Uses Of Human Urine 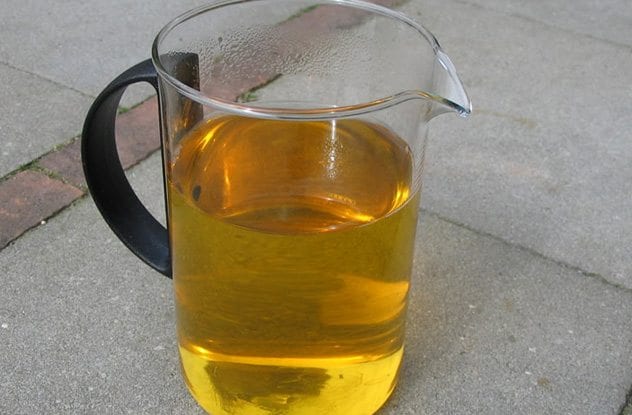 Chinese medicine made some incredible breakthroughs. They invented, for example, endocrinology in the 200 BC, a science the West didn’t develop until the 20th century. That’s an accomplishment, but it’s also a disgusting one.

Endocrinology involves separating hormones from human secretions. When they were picking human secretions, the Chinese chose pee. They would gather up 150 gallons of male urine in a large pan and boil it until it evaporated. A crystallized hormone that they called “autumn mineral” would be left behind. It was just crystallized urine.

They couldn’t exactly inject hormones, so they would take the crystallized urine by eating it, and they ate a lot of it. “For each dose,” one medical paper instructed, “take five to seven pills with warm wine or soup before breakfast.”

They used it as a hormone, and it worked. Amazingly enough, China developed a whole field of medicine 2,000 years before the rest of the world. Still, it’s hard not to wonder about the man who first had the idea to get 150 gallons of urine together, boil it, and pop whatever was left behind in his mouth. 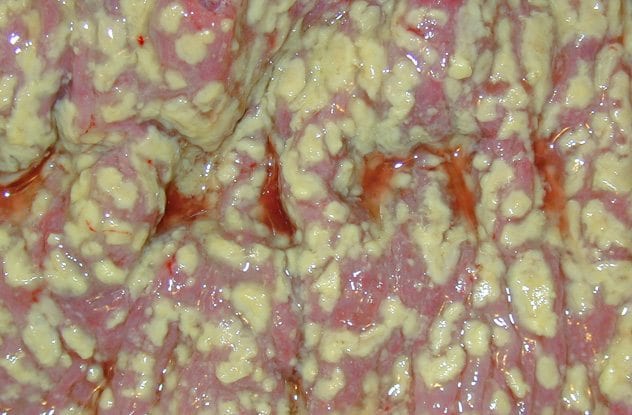 They didn’t stop their breakthroughs with drinking pee. By the fourth century BC, they’d developed stool transplants, another medical idea the West didn’t discover until the 20th century. The ancient Chinese way of doing it, though, was a little less than appetizing.

Chinese doctors would put together something they called “yellow soup,” which was water mixed with a healthy person’s fermented stool. They’d give it to patients who had diarrhea and order them to drink up every last drop of that liquid feces.

Again, this worked well. The healthy bacteria in the stool would get rid of the bad bacteria in the patient’s body. The same concept is used today to treat C. diff, a deadly disease, but in ancient China, this was just listed as a diarrhea remedy. The Chinese had a way to treat diarrhea that worked, but more than a few patients must have seriously considered just toughing it out. 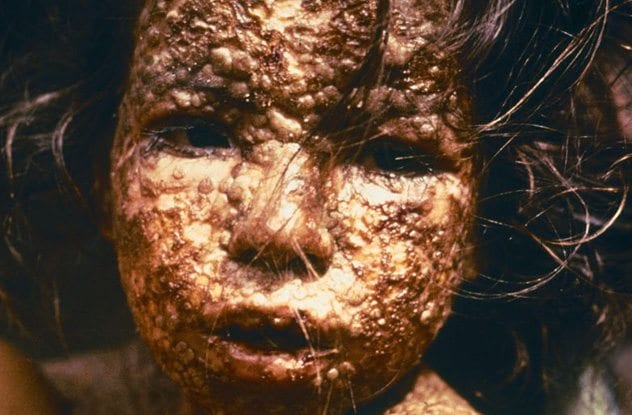 China also invented the first smallpox vaccine. By the year 1548, they’d written guides on one of history’s first vaccinations. Even before it was written down, though, the people had heard about the vaccine and figured they could do it themselves.

Parents who had heard of this new smallpox vaccine fed their kids scabs that had fallen off the skin of smallpox patients. They’d heard that exposing yourself to smallpox could keep you healthy and, never too pressed to hear the details, just started feeding their kids scabs and hoping for the best.

Feeding your kids scabs, of course, just makes things worse, but the real treatment wasn’t much better. Instead, doctors would crush those scabs into a powder and blow them up people’s noses.

It worked, sort of. There was about a 2-percent chance getting smallpox scabs blown up your nose would infect and kill you. That, though, gave you better odds than tackling a smallpox epidemic head-on, so people around the country signed up.

1They Disgusted The World By Inventing Toilet Paper 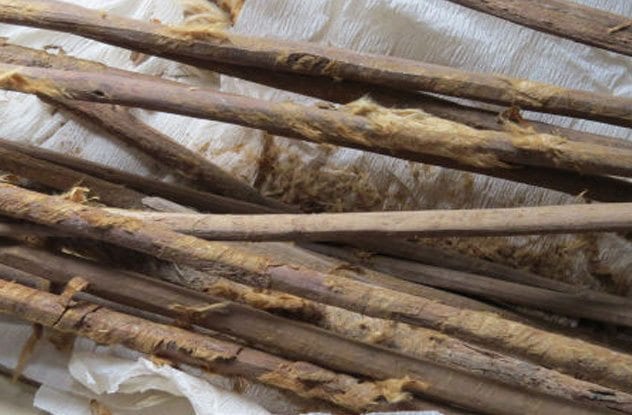 Somewhere around the year 600, the Chinese invented toilet paper. It’s a product we still use today, but we only think it’s normal because we’re used to it. When toilet paper came out, it was considered the most disgusting thing on this list.

The Chinese were the first people to use it, and they used a lot of it. A record from 1393 says that the imperial court ordered 720,000 sheets in a single year. The used leftovers were gathered on a mound so massive that the people called it “Elephant Mountain.”

They’d had toilet paper for a while by then. It’s hard to say when it was invented because the Chinese didn’t like to talk about it. The oldest reference we have, though, is delightful. It’s a note from a man that mentions a “paper on which there are quotations or commentaries from ‘Five Classics’ or the name of sages, I dare not use for toilet purposes.” Which means that the first mention of toilet paper was from a man begrudgingly deciding not to wipe his ass with the I Ching.

An Arabic traveler who visited China saw them use it firsthand. He wrote about it in disgust, saying, “They are not careful about cleanliness, and they do not wash themselves with water when they have done their necessities; but they only wipe themselves with paper.” To the other countries of the ancient world, using toilet paper was the most disgusting act of all.