It may sound like an urban legend, but creatures crawl up toilets all the time. Tales of animals infiltrating our must vulnerable space fill us with primal fear. By its nature, plumbing is open to the shadowy world of the sewers. Not only do snakes, rats, and spiders routinely make their way into commodes, but seals, opossums, squirrels, and kangaroos have all terrified unsuspecting people in bathrooms. And sometimes, they attack. 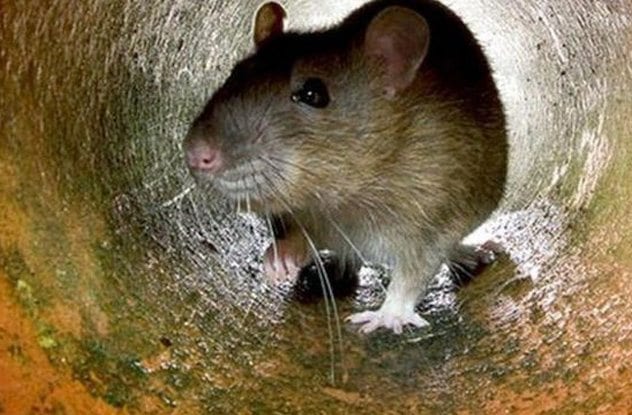 In April 2016, a toilet rat attacked an elderly Irish man in his home in Middleton. He was rushed to County Cork Hospital for bites on his backside. A plumber discovered a broken pipe nearby—the likely entry point. The attack caused panic. Following floods, Cork has been plagued by a rat infestation. Some propose dumping poison into the sewer system, but that could potentially contaminate water sources. Homeowners have been warned to keep their toilet seats down when not in use.

Rats swim up toilets with terrifying frequency. They are unable to climb up the sheer walls of pipes. However, ground floor and basement apartments tend to have pipes with horizontal or gradual sloping angels, making them easy to penetrate. Penthouses are equally vulnerable. One janitor revealed that every toilet rat he has come across has been in top-floor apartments. They likely enter through pipes on the roof. 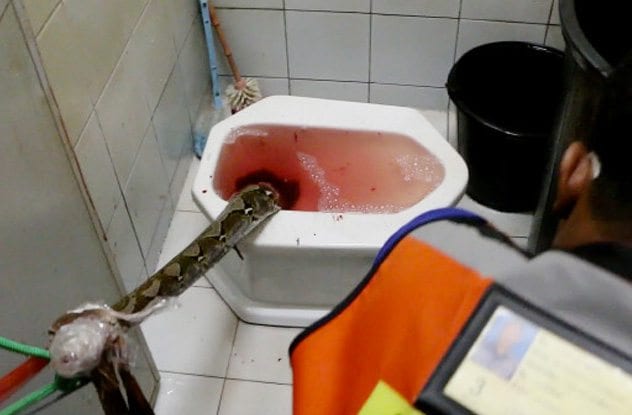 In May 2016, a 10-foot python crawled up a commode and bit a Thai man’s penis. Upon arriving at the scene in Chachoengsao Province, emergency workers discovered the snake’s head tied to the bathroom door with the rest of the beast stuck in the toilet. They had to dismantle the commode to free the serpent. Atthaporn Boonmakchuay, 38, was rushed to nearby Chularat Hosptial. Both the he and the snake survived.

One rescue worker reported that he has seen countless snakes in toilets but never seen one go for genitalia before. Boonmakchuay revealed that he checked the toilet bowl before squatting, He grabbed the python’s neck “to prevent it from taking him down.” “At first I thought my penis was gone,” but he managed to pry open the beast’s jaws. His wife and a neighbor covered the snake’s head with a plastic bag. The snake was released into the wild.

Kangaroo in toilet cubicle – unrolling and eating the toilet paper

In September 2016, an Australian man filmed a kangaroo eating toilet paper in a Dreamland Island public toilet. According to University of New South Wales kangaroo expert David Croft, the critter was likely attracted to the cool temperature of the toilet block. The bathroom not only provided shade but also water—and plenty of fiber. Dr. Croft revealed that kangaroos “often eat cardboard boxes, so toilet paper is not that much removed from the former and perhaps a softer option.” However, he pointed out that toilet paper “would not be a preferred food.”

A month later, the same kangaroo was filmed again eating toilet paper. In both videos, the kangaroo is blase about the presence of humans. Dreamland Island is a popular tourist destination, and the resident marsupials may have developed a tolerance to people. Some believe the critter has developed an “addiction” to the easy meal of toilet paper. 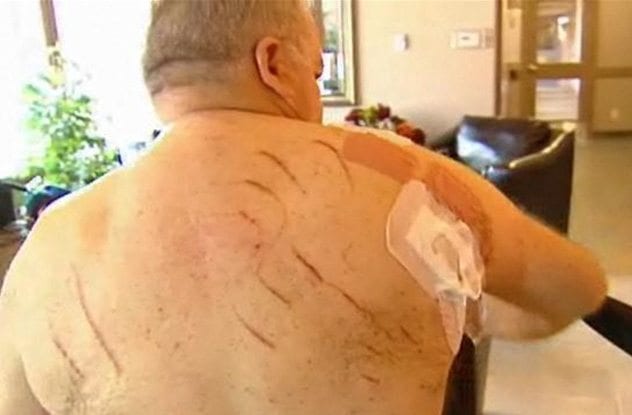 In May 2012, a black bear mauled a Canadian sportsman in an outhouse near Ontario’s Dunbar Lake. Gord Shurvell, 65, left the door open to enjoy the view, when the bear attacked. Shurvell kicked the intruder, but the beast grabbed his pants. When reporters asked whether the bear scared the (expletive) out of him, Shurvell insisted, “It was already gone!”

With only the toilet paper in his hand for defense, Shurvell was dragged by the arm into the forest. Friend Daniel Alexander heard the commotion, grabbed a gun, and killed the beast with a lucky shot.

Shurvell was rushed to Sioux Lookout Hospital. Doctors treated him for a puncture wound to the back of the head and lacerations across his upper body, and arms. Shurvell survived and received three rabies treatments following the ordeal. Shurvell indicates that next time, “I’ll probably put up with the stench and close the door.” 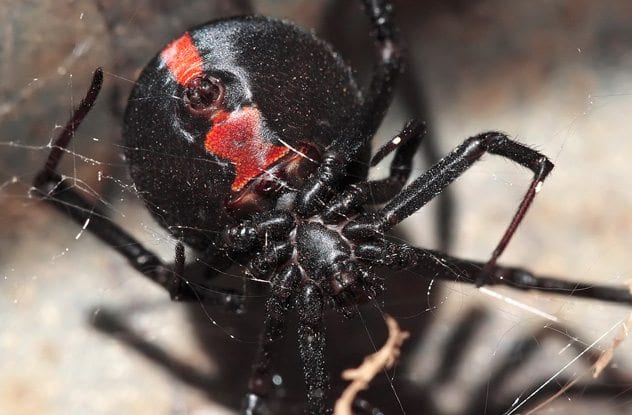 In September 2016, a spider bit a specific Australian man on the penis for the second time that year. The attack came as the 21-year-old was using a portable bathroom on a Sydney construction site. Jordan, whose last name is not given, knew the familiar sting. He was rushed to the hospital for treatment. The previous bite in April also occurred in a portable bathroom.

Jordan was wary of using portable toilets. However, he revealed: “The toilets got cleaned that day, and I thought it was my opportunity to go use one.” Jordan investigated both seats—but found nothing. He is unaware of what spider bit him but was treated with redback spider antivenom. Redbacks are a relative of the black widow, which they closely resemble. Over 2,000 Australians are bit every year by this common arachnid. However, getting bitten twice in the penis in twelve months is astronomically unlucky.

In 2016, toilet frogs plagued the Tampa Bay area. According to resident Marley Mills, it happened seven times in two months. Everyone in her family has encountered amphibians in the commode. Plumber James Greco revealed that the plumbing vent pipe is the “welcome mat” for amphibians. They enter looking for food or shelter and get stuck. He recommends chicken wire to prevent critters from entering.

Frogs can enter sewer openings or slip into the system through cracks. It is more likely they access a house through other means and then make their way into the toilet. Other times, they fall through vent pipes on the roof, where they gather to warm themselves. Journalists Mark Douglas speculates that the toilet frog invasion was due to faulty paving jobs. He alleges, despite $2 million in road repairs, Tampa is plagued with potholes that breed tadpoles. 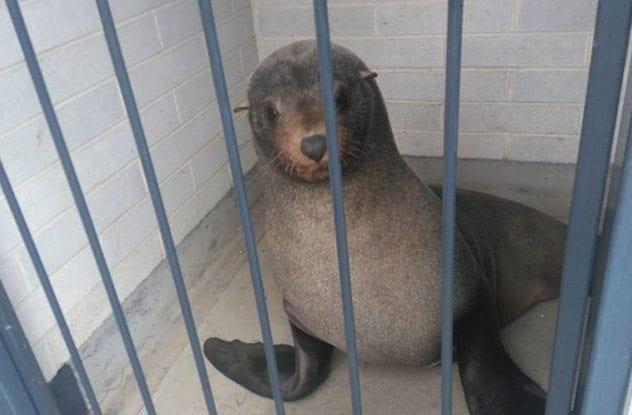 In July 2016, locals discovered a seal sleeping in a public toilet in Tasmania. Dubbed “Sammy the Seal,” the 265-pound male Australian fur seal was found fast asleep in a stall within the ladies’ room of Mersey Vale Cemetery in Davenport—located in the northern part of the state. Rescue workers were able to relocate Sammy to a nearby waterway. The Tasmanian toilet seal was free again.

Australian fur seals are abundant around Tasmania, particularly in the Bass Strait, which separates the island state from the mainland. They often wind up as intruders in backyards and paddocks. Experts believe Sammy swam up nearby Horsehead Creek before entering the cemetery. Parks and Wildlife workers had to sedate Sammy to transport him. Initially, the adventurous critter was locked in the stall to prevent any potential negative interactions with people. Quick intervention was essential to ensure the seal’s survival. 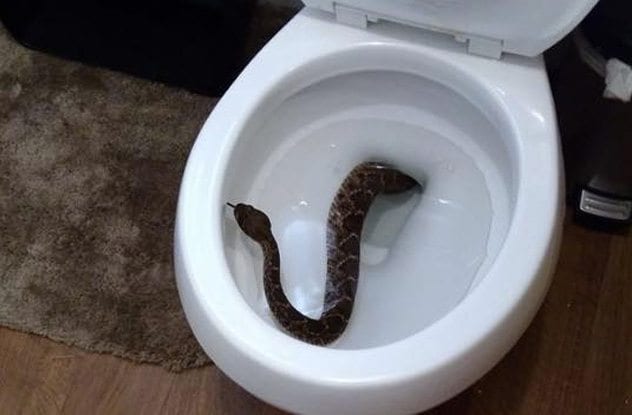 Earlier this month, a Texas family discovered a rattlesnake in the toilet of their Aberdeen home. When young Isaac McFadden ventured into the bathroom in the morning, he discovered a “big clump”—he knew it was a snake. The boy told his mother, who returned with a shovel to slaughter the serpentine invader. Big Country Snake Removal’s Nathan Hawkins found the dead snake in the toilet “very unusual” but nothing outside his wheelhouse.

During a routine sweep, Hawkins discovered 23 other rattlesnakes around the home. The first place Hawkins looked was in the old storm cellar. He discovered 13 rattlers huddled in a corner. In the crawl space, he found old sheet metal housing a den. He removed 10 adults and five babies from the den. Hawkins receives 50 to 75 calls a day. 90 percent of snakebites he’s encountered occur when someone is trying to harm the snake. 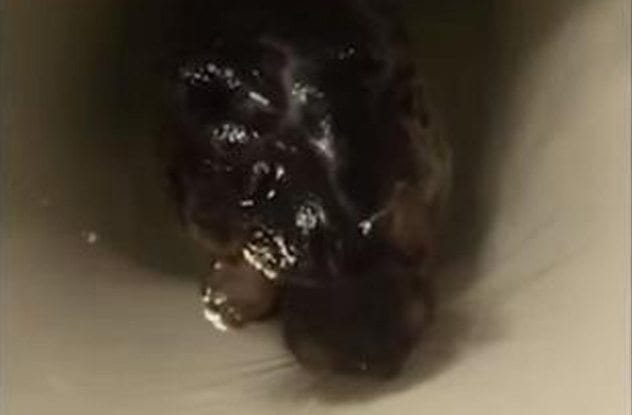 On September 18, 2015, after returning from their honeymoon, a couple discovered a mysterious creature in the toilet of their home in Clinton, Mississippi. Homeowner Ronald Morris described it as a “big brown mass, and besides this had ears and whiskers on it . . . it was very shocking.” Some are convinced it is a squirrel. Others insist it is a rat.

Local plumbers believe the animal got trapped inside the bowl and was poisoned in search of fresh water. Skeen Plumbing & Gas’s Richard Parker revealed how easy it is for these critters to enter our abodes: “Where they get wet is where the P trap is inside the toilet that keeps the methane gas out . . . so all they have to do is a little bitty two-second swim, and they’re in the bowl.” Parker recommends a check valve, which allows waste to exit the bowl but nothing to climb back in. 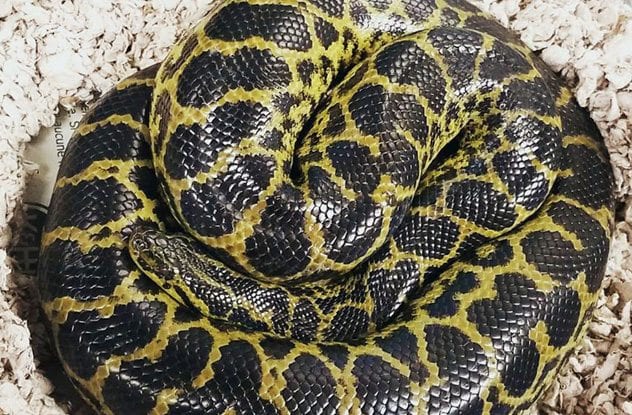 In January, the Animal Welfare League discovered a 4-foot-long anaconda in the toilet of an Arlington, VA apartment. The snake was a juvenile. Adults can reach up to 13 feet, over 100 pounds, and, if not well-socialized, can be extremely dangerous. Their natural habits are wet areas like swamps and marshes, which may explain its attraction to the toilet. Anacondas are not poisonous but are powerful constrictors that crush their prey.

The Animal Welfare League’s Chelsea Lindsey believes someone in the building owned the snake. If not properly secured, serpents can easily escape. The other possibility is that the snake was abandoned in the building. It was probably chasing food—like mice and rats—through the sewage system. It is illegal to keep anacondas are as pets. “They get very large,” Lindsey warned. “The average person is not going to be able to handle a snake like this.”

Dubbed the “Indiana Jones of folk music” by TimeOut.com, Geordie McElroy has hunted spell songs, incantations, and arcane melodies for the Smithsonian, Sony Music Group, and private collectors. A leading expert in occult music, he is also singer of LA-based band Blackwater Jukebox.