Sloths have the short end of the stick in many ways. Who wants to be named after a Deadly Sin? Calling them “sloths” isn’t just a quirk of English either; other languages have names for them that cluster around terms like “laziness,” “slow,” and “sleep.” The scientific name for three-toed sloths, Bradypus, is Greek for “slow feet.” Only their cute and mildly bemused expressions worthy of Internet memes save them from being considered completely useless.

But sloths are much more than little bags of indolence. Here are ten facts about sloths to shake up their singularly somnolent status in the animal kingdom.

10 They Live In A Dangerous World

Surely an animal that rarely moves more than 40 meters (130 ft) in a day must live a carefree and positively Zen lifestyle? Alas, nature is red in tooth and claw, and the sloth makes a tempting target for many predators. As the video above shows, even when in their arboreal homes, they can fall prey to pumas. It gets worse, though. Their jungle home leaves them open to attack by Harpy eagles, which feed mostly on sloths.

But it’s not just fearsomely large animals that prey on sloths. In one case, a small spectacled owl was found to have killed and eaten a sloth. This is remarkable, because sloths are twice as large and four times as heavy as spectacled owls. While sloths do have their long claws and may swipe at a predator, their low muscle mass makes such an action little more than a warning. How can a creature such as the sloth have evolved to be so seemingly defenseless?

9 Slothfulness Is A Defense 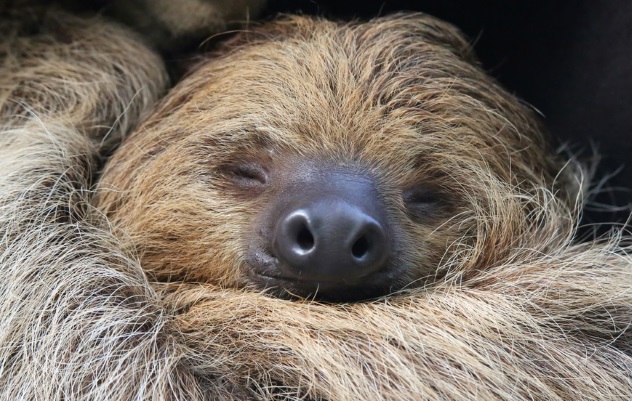 It turns out that nature has equipped the sloths with a brilliantly simple way of avoiding predation—moving very, very slowly. While it’s probably a myth that standing still would stop a T. rex from seeing you, it is nevertheless much easier for predators to spot a moving target. By moving so sedately, the sloth blends into the canopy from which it hangs.

No need to run away from a predator if the predator never notices you, but sloths go further than that. 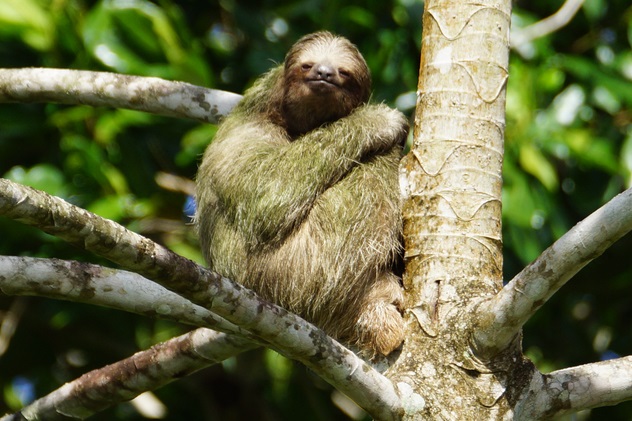 Another level of camouflage for the sloth is the coating of algae which it cultivates in its fur. These symbiotic organisms find the moist and warm environment of sloth hide perfect for growth. Normally, being slimed by algae is something to be avoided. For the sloth, however, it is a happy relationship.

Sloth hair is long, rough, and grooved in such a way as to encourage the presence of bacteria and algae. The algae gives sloths a terrific disguise by turning them green, which makes them harder to spot against the green leaves in which they live. One of the first gifts that mother sloths give their babies is the algae that will hide them from predators. So close is this relationship that the most common type of algae found on sloths, Trichophilus welckeri, is found nowhere else in nature.

With an algal bloom on their back, spotting a sloth is like trying to find a needle in a haystack . . . when the needle is hidden inside a piece of hay.

7 The Mysterious Bathroom Habits Of The Sloth 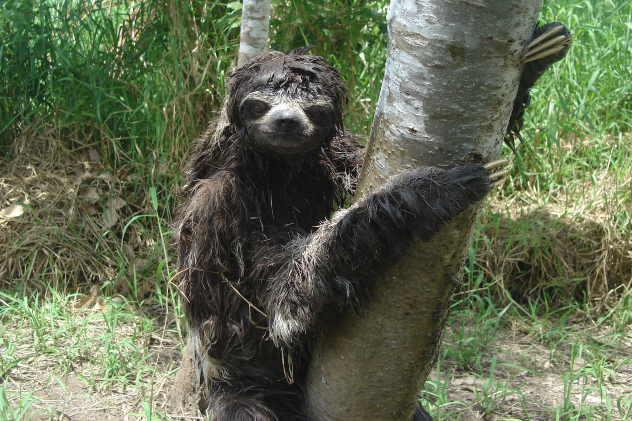 Animal defecation is not generally a topic to set the heart racing. Scientists, however, are another breed. It turns out that there is a mystery at the heart of how sloths use the bathroom.

We have seen the lengths to which sloths go to hide from predators. They are creatures honed by evolution to live and feed in trees. Yet, once a week, they descend from their tree to defecate. This lengthy process leaves them utterly at the mercy of passing predators. Why do they do this dangerous activity when they could simply let their droppings drop from the trees?

One solution that has recently been suggested involves sloths, their algae, and moths. This may not be the most alluring threesome, but it’s one that works for sloths. The Cryptoses choloepi moth lives exclusively on sloths and lays its eggs exclusively in sloth droppings. The moth itself defecates on the sloth, which feeds the algae living there. So the moths and algae benefit, but why does the sloth go along with this somewhat distasteful business? Because sloth diets lack variety, they eat the algae and other things living on their body to gain nutrients. Farmers have a reputation for hard graft, and the sloth is no exception. 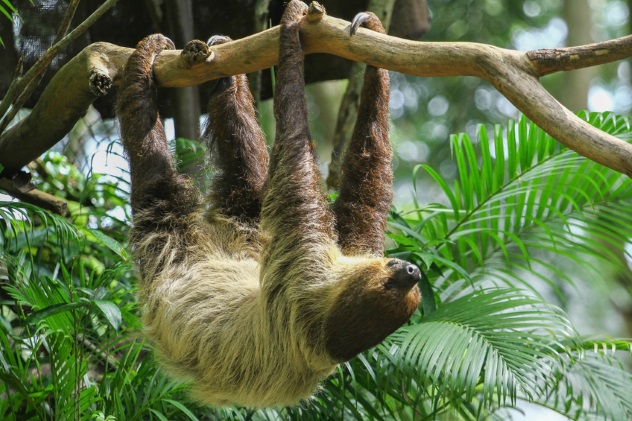 Sloths are sometimes hunted by humans, but given their low muscle mass, they do not form a large part of anyone’s diet. Also, unless you catch a sloth on the ground, you may have a hard time getting your dinner.

Sloths get very little energy from their diet of leaves. They take a long time to digest their food and waste as little energy as possible. Staying in trees is pretty much a sloth’s whole deal, so it makes sense that they would be efficient at it. Their claws essentially form a hook on the branch, so holding on requires no expenditure of effort.

Why is this bad news for human hunters? Say you take your gun, you spot your sloth, you take aim, and fire (you monster). You move in to grab your dinner, but it’s not waiting for you on the ground. It remains suspended above you thanks to your target’s efficient little fingers. 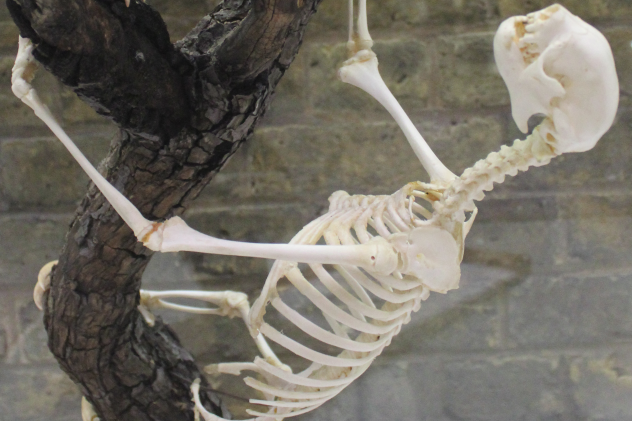 A fun little fact is that almost all mammals have the same number of vertebrae in their necks. From short-necked gibbons to stretched-out giraffes, mammals all seem to manage with seven cervical vertebrae. Sloths don’t play by these rules, however, and confusingly may have more or fewer vertebrate. Two-toed sloths may have anywhere from five to seven, and three-toed sloths have eight or nine, depending on the species.

Normally, any alteration in the genes that deal with vertebrae would be debilitating for any animal. It seems, however, that the slow pace of sloth lifestyle has given them flexibility when it comes to changing their spines. Having a nutrient-poor diet means having a large digestive tract, comprising up to half a sloth’s weight. It could be that moving the ribs forward or backward with relation to the neck helps them to fit more gut in. But this is pure conjecture, and the mystery of sloth necks remains to be solved.

Despite spending most of their lives in trees, sloths are fantastic swimmers. This relates in part to their large stomachs. Digestion can be a somewhat gassy affair for anyone, and for vegetarians, even more so. A sloth’s large and bloated stomach acts as a natural aid to buoyancy. Doing a passable breast stroke, they move faster in water than they do on land.

You might ask why a sloth would ever need to swim. A rain forest is wet overall but not usually very wet at the tops of its trees. Sloths have to move from tree to tree and area to area in search of food and mates. If they were unable to swim, then any stream would be impassable.

Like almost everything a sloth does, though, their swimming is slightly shambolic. A strong current can easily submerge them. Here, their relaxed attitude to metabolism comes to the rescue. Some experiments (which would not pass an ethics committee today) have shown they can go for as long as 40 minutes without breathing. Their lazy lifestyle means that they require little oxygen.

3 Young Sloths Are Not Stupid 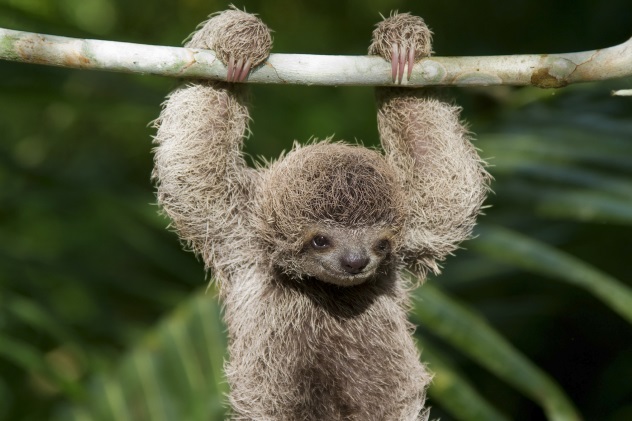 An incorrect fact floating around the Internet should be of no surprise to anyone. It is, however, rare to be able to pinpoint the source. The fact in question runs like this:

“My absolute favourite piece of information is the fact that young sloths are so inept that they frequently grab their own arms and legs instead of tree limbs, and fall out of trees.”—Douglas Adams, The Salmon of Doubt

That would indeed be a great piece of information. Unfortunately, it isn’t true. There is no mention of such ineptness in the scientific literature despite long and detailed study of rearing orphaned sloths. There is no mention of this “fact” on the Internet that can be dated to before the publication of The Salmon of Doubt. Baby sloths spend their first months clinging to their mothers in the trees. A baby sloth that fell from a tree would not stand much chance. Evolution is a hard teacher.

2 They Are Ambling Drug Laboratories 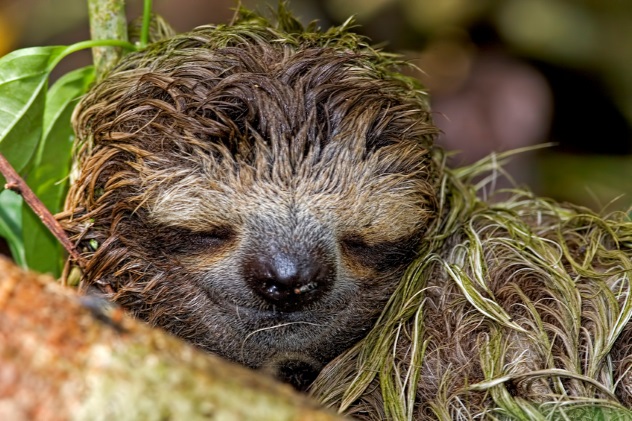 A stumbling block in drug development is the design of new bioactive compounds to test. One of the simplest ways to get new possible medicines is to mine the myriad ones that already exist in nature. A looming antibiotic crisis makes this more vital than ever. It turns out that sloths, and the ecology they carry in their fur, may be just the place to look.

All organisms compete for survival. Just because you’re living on a sloth’s back doesn’t mean you get a free ride. The microorganisms fight for space and food. They release compounds to kill their neighbors. One study found fungi producing new compounds with powerful antiparasitic, antimalarial, anti-cancer, and antibacterial properties. 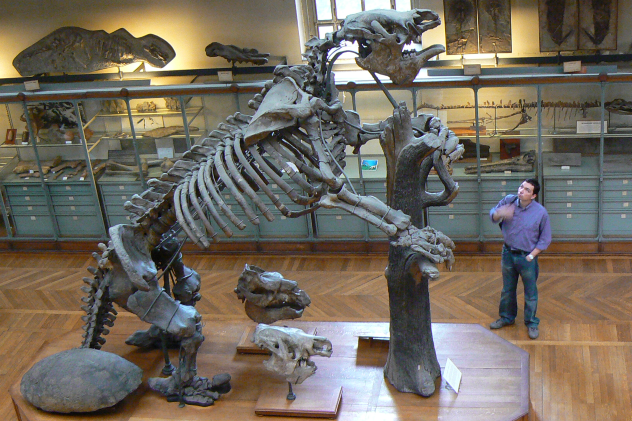 Today, there are only two genera of sloths, the two- and three-toed varieties, with six species between them. Apart from the number of toes, there may not seem to be much difference between them. Both live in trees, move slowly, and much leaves. But the fossil record is full of sloth species that are nothing like their modern members.

Thalassocnus lived on the beaches of Peru between four and eight million years ago. While its modern relatives can paddle in the water, this sloth was at home in the sea.

Megatherium were giant sloths that lived until around 8,000 years ago. They weren’t merely giant in relation to modern sloths; they were as big as elephants. Despite their colossal size, it was once believed that they, like present sloths, lived in trees. If that were true, ancient humans would have been thankful if these sloths descended from trees to use the bathroom.

Megalocnus, a ground sloth from Cuba, only died out in 2200 BC. If it seems like we just missed out on all the great sloths, then we need to look beyond the cute faces of our sloths and appreciate just how special they are.

Ben is a part-time biochemist and part-time writer whose work can be read here.