Many systems of religious belief encourage self-reflection, sacrifice, and self-restraint in the pursuit of enlightenment. But how much are we really willing to put ourselves through in order to attain something like inner peace or eternal life? For some, no amount of pain and suffering is enough to deter them in their quest for such things. For others, pain is even seen as a mandatory part of being made holy. 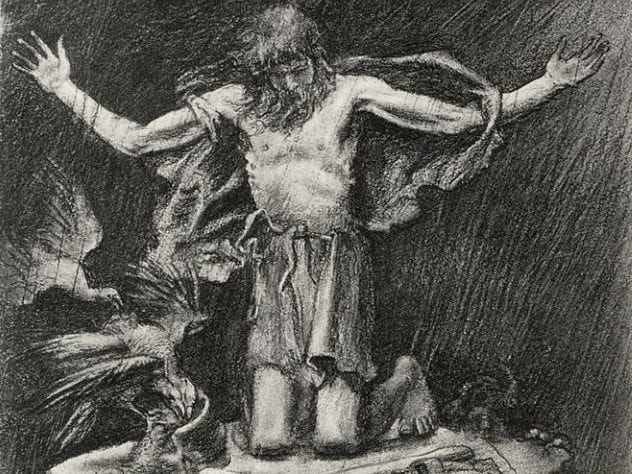 Fifth-century Syrian saint Simeon Stylites was the first famous “Stylite,” or pillar-dweller. In his time, the usual practices for an ascetic included fasting, self-harm, and solitary confinement in tiny spaces. Simeon felt it was his calling to do these acts . . . while also living in isolation atop an 18-meter (60 ft) column, completely exposed to the elements.

His fellow monks became concerned and asked him to abandon either the idea or the monastery. He chose the latter option, and he soon had throngs of fans coming to see him attempt to live in his chosen way. Simeon crouched on a 46-centimeter-wide (18 in) slab atop that pillar for at least 37 years. He became so popular that at one time, most shops in Rome had little portraits of him sitting on the pillars of their doorways.

Simeon’s feet were bound in place, so he couldn’t shift positions, which strained his bones and sinew to the point where they bulged from beneath his skin. With his feet tethered to the platform, he spent most of the day bowing and rising repeatedly. This eventually caused three separate dislocations in his vertebral column. According to his disciples, Simeon also lost his vision for 40 days (a fact which he tried to hide from them whenever they visited), and his belly “burst open” from standing for so long. 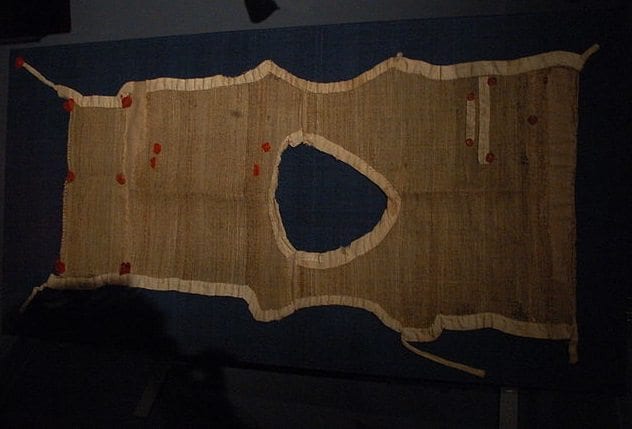 A cilice (aka hair shirt) was an uncomfortable—and sometimes outright painful—garment worn underneath regular clothes, which allowed one to “mortify the flesh” and strengthen the spirit. Early Christians made these outfits using coarse goat hair and burlap-like fabric and wore them as undershirts and loincloths. This ancient practice saw its greatest resurgence in medieval Europe, where it became popular among ascetics, saints, and leaders.

Charlemagne and Ivan the Terrible were among those who chose to be buried wearing one. Cilices were even worn casually by average folk who felt guilty after indulging in luxuries unnecessarily. This practice survived into the modern era, with Irish ascetic Matt Talbot being a notable example: Having lived a quiet life as a laborer struggling with alcoholism, he suddenly collapsed in the street in 1925. As his dead body was being prepared for a pauper’s grave, examiners discovered a series of weighted chains bound across his emaciated body.

Members of Opus Dei wear cilices of barbed metal around their thighs. Those who wear them typically don’t talk about them and will keep them concealed at all times. This serves as a precaution against hubris (which comes from openly displaying piety) and also prevents those unfamiliar with the practice from seeing the resulting injuries. 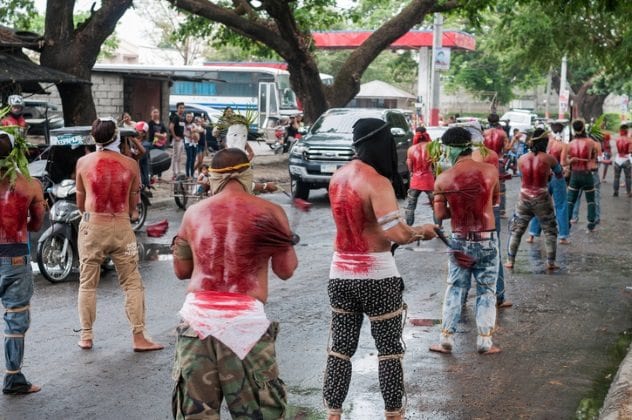 Flagellation is the act of lashing the body with whips. Whipping oneself was customary in many different ancient cultures, from indigenous Americans to the Spartans to certain sects of Christianity and Islam. When the Black Death came to Italy in 1259, a group of Christians who saw the plague as divine judgement arranged themselves into what amounted to a conga line and lashed themselves repeatedly in order to petition God for forgiveness.

In the Philippines, festivals centered around this act are held on religious holidays. Parading down the streets, devotees carrying huge crucifixes on their backs are lashed by bystanders. Some kneel in prayer with their arms tied to wooden stakes that pierce their underarms. Beneath an altar with an image of Christ on the wall, men scour themselves with metal rods tied to bloodied rope. This is seen as an act of penitence.

Shia Muslims hold lashing festivals for the Mourning of Muharram. To mourn the sacrifice of Muhammad’s grandson, men and boys observe a period of self-inflicted whipping and cutting in public. The most extreme participants use knife blades attached to chains to slice open the flesh on their backs. Thankfully, some Muslims prefer to honor the prophet by donating blood to hospitals on the holiday, instead. 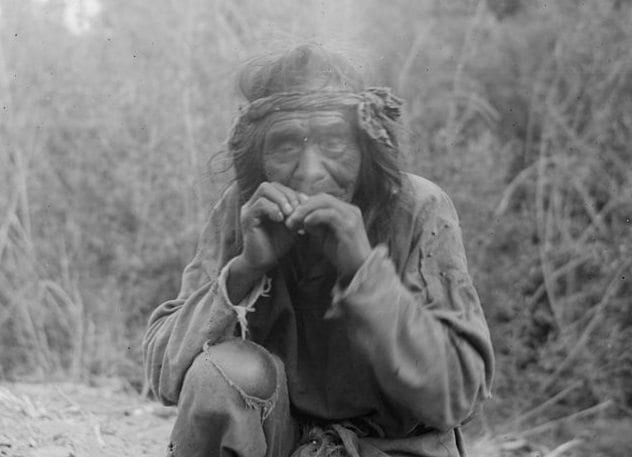 Some secular systems of belief incorporate mind-altering chemicals in their practices. Recreational use of psychedelics in combination with ritual or music is sometimes used to improve well-being and is studied extensively in clinical settings. Our modern understanding of neurochemistry makes this kind of experimentation relatively safe . . . especially in comparison to the attempts our ancestors made.

The shamans and oracles of ancient times often put themselves in peril with their use of entheogens, which are any psychoactive drug used for spiritual purposes. Many cultures made use of the Datura flower, which contains atropine and scopolamine. Native Americans used high doses of it ceremonially to induce visions and see into other realms. For these purposes, the side effect of terrifying, panic-inducing hallucinations was welcome. The more extreme side effects, like permanent blindness, insanity, or “prolonged and painful death?” Not so much. 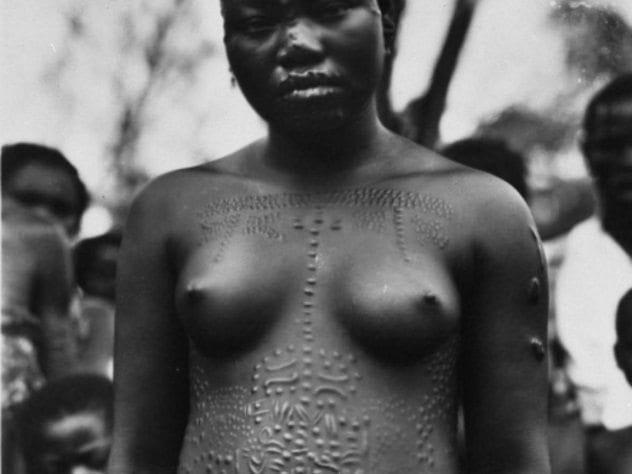 Instead of directly altering the mind, some opt for extreme alteration of the body, instead. A prehistoric Japanese culture known as the Jomon frequently removed their canine or incisor teeth after reaching the age of 13. This modification was primarily a mark of one’s social status. As a result, milestones such as marriage or the loss of a loved one were displayed through a person’s smile, rather than through a wedding ring or mourning shroud.

Modern “body mod” practices were popularized during the tattoo renaissance of the 1990s and culminated in more extreme methods, such as scarification, skin implants, and earlobe stretching. Many of these practices mimicked tribal practices of the past. The evolution of these methods has produced practices like flesh hanging, in which people hang suspended from hooks in their flesh. A similar practice is “pulling,” where several people are hooked to one another, and all move in opposite directions. Today, there’s even the Church of Body Modification, where ancient and modern modification techniques are continued. 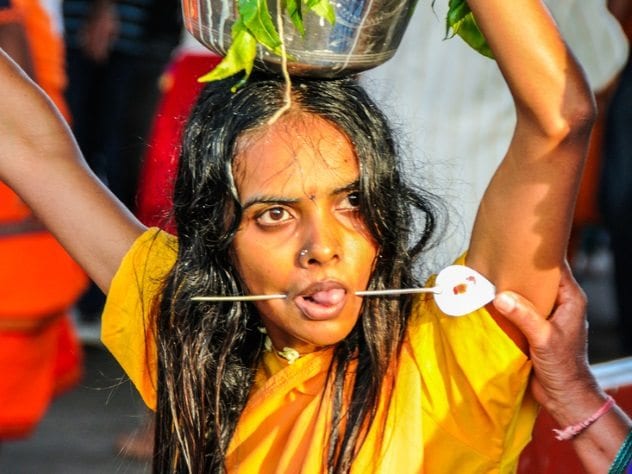 Near Kuala Lumpur, one million people or more will gather for Thaipusam, all having fasted for two days prior to the event. It’s a very festive affair, despite being a test of pain tolerance for everyone involved.

In this parade, people wear sandals with iron nails sticking up from the sole. Sliced limes are impaled on the nails, which causes wounds to sting but also acts as a disinfectant. People everywhere are adorned with dozens of large bells pinned to their torsos and faces. In honor of the Hindu god Murugan, who vanquished a great demon with a spear, worshipers walk with long metal skewers pierced through their cheeks. To prevent speaking, ornate lances arranged into cross shapes are used to pin the lips and tongue into place.

Designated individuals carry ornate, portable shrines called kavadis. These shrine-bearers are tethered to it by many meat hooks attached to ropes. Despite this, many of the Southeast Asian Hindus who take part in these rituals report that very little blood is drawn by puncturing the skin in this way.

In the Amazon, the Satere-Mawe people require young men go through an agonizing ceremony before reaching manhood. News of the almost unbelievable feats of pain tolerance involved has spread fast across the Internet, drawing in outsiders who think (often incorrectly) that they can handle the challenge. Starting from the age of 12, boys from this tribal community must collect Paraponera clavata, aka bullet ants, to fill large gloves with. Then they must wear these gloves 20 times over, for ten minutes each time.

The ensuing pain is approximately 30 times worse than the worst wasp stings and is usually compared to the agony of being shot. The Schmidt Sting Pain Index famously describes the feeling of a single sting as “like fire-walking over flaming charcoal with a 3-inch rusty nail in your heel.”

The ants’ stings release neurotoxins potent enough to cause nonstop, paralyzing amounts pain for three to five hours. Bouts of sweating, nausea, and convulsions are typical. Multiple, consecutive stings can be fatal. 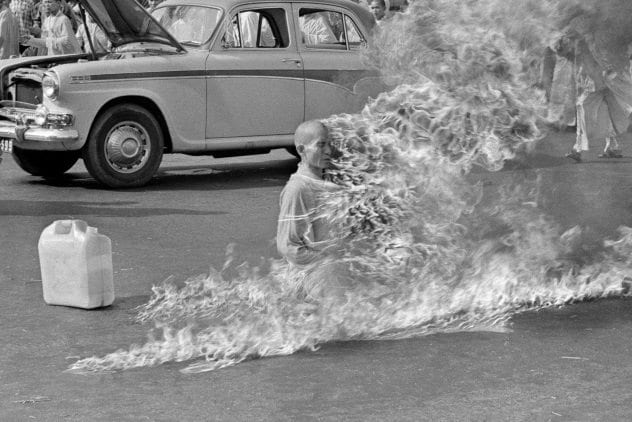 Buddhist monk Thich Quang Duc’s self-immolation remains one of the most famous examples of gruesome—yet nonviolent—protest in modern history. The president of the Republic of Vietnam, Ngo Dinh Diem, favored Catholicism and had long persecuted the country’s Buddhist population. Thich Quang Duc took to the streets of Saigon drenched in gasoline, set himself on fire, and burned to death in silence, sitting in the lotus position.

China’s takeover of Tibet recently sparked an epidemic of public self-immolations. At least 100 individuals have set themselves on fire to protest the actions of the Chinese government. In 2011, 12 did so as a group. By the next year, a group of more than 80 did the same. In Beijing, Tiananmen Square has been outfitted with fire extinguishers to prevent Tibetan activists from self-immolating there. 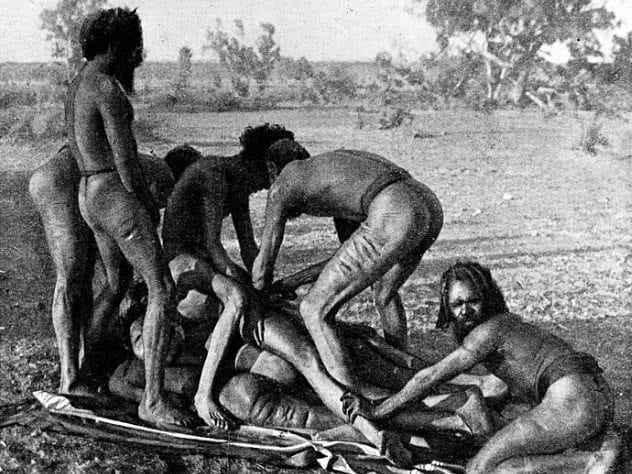 For some Aboriginal children, becoming an adult in the eyes of tribal society involves painful rituals in which the genitals are modified. Typically, this is limited to circumcision or cuts to the clitoris at the onset of puberty. Other times, a sharp stone tool is used to split open the underside of the penis.

In one of the worst examples, “a boy being initiated was expected to repeatedly hit his penis with a heavy rock until it was bruised and bloody.” According to this source, his incisors were also to be knocked out of his mouth while his elders exchanged ancient religious secrets with him in return.

Another report described the process of bifurcating the penis: After making an incision, a rod is inserted into the urethra, and a long cut is made from the head of the penis to the top of the scrotum. As a result, the boy will now have to crouch in order to urinate or ejaculate properly. Anthropologist Barbara Myerhoff famously noted that this specific ritual makes the male genitalia superficially resemble that of a menstruating woman’s. The pain experienced is also likened to menstrual or birth pains, supposedly giving boys more understanding of reproduction and the cycle of life. 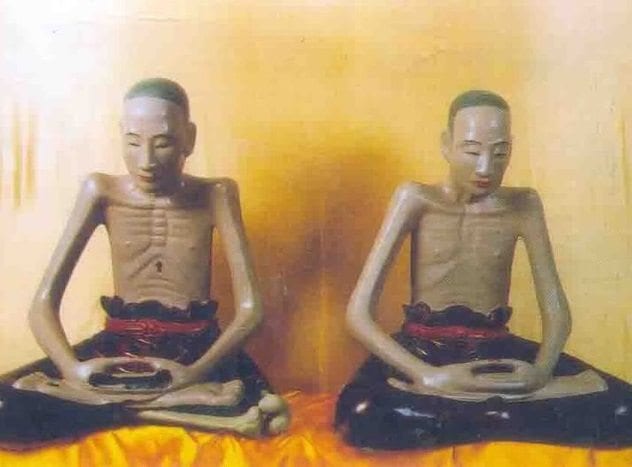 Ancient ascetics living in the mountains of Japan aspired to become “living Buddhas” through excruciating physical and mental trials. These practices culminated into one final act: self-mummification. In this ten-year-long process, priests would slowly cause their own bodies to decrepify into still-living husks.

The process was divided into three 1,000-day periods, carefully designed to cast away physical impurities that impede passage into nirvana. The priests ate only nuts or grain and meditated beneath streams of ice-cold water descending from mountaintops. After this, their diets consisted only of bark and pine roots, causing their body fat percentage to drop close to zero. After this, they would start to consume a tea made from toxic sap, which caused excess moisture to leave the body through vomiting.

After this stage, the priests were placed in a stone tomb with a tube for air and a loud bell to signal to others that they were still alive. When the bell stopped ringing, the tomb was sealed. 1,000 days later, the tomb was reopened. If the body was preserved properly, the priest was seen as having attained Buddha-hood and was displayed in temples for ages to come. Naturally, those who failed to preserve their bodies in this way were still highly respected.

Bridget O’Ryan is basically a modern hermit. She also assures us she doesn’t have some kind of weird obsession with torture, but after reading this list, we find her claims suspect.