Scattered under the ground beneath our feet are the remains of history. There are little pieces of the lives of people who lived before us that give us little glimpses into who they were—the things they held dear, the homes they lived in, and the bones of their decaying bodies.

But life thousands of years ago wasn’t always gentle and easy. Sometimes, when these remains are uncovered, the stories they reveal are brutal and violent—and sometimes, they’re pulled straight out of a horror story.

10 A Pit Of Amputated Arms 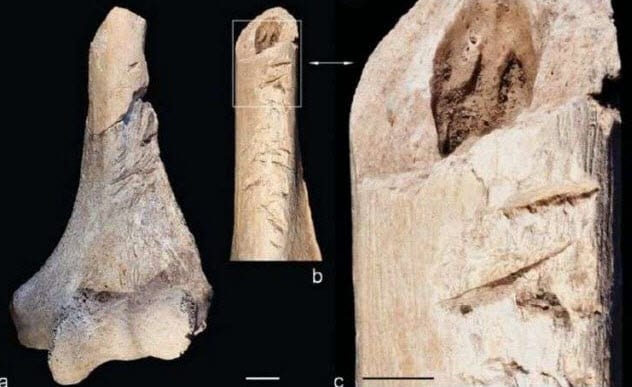 A team working in France found a horrible glimpse into our past: seven severed arms that had been brutally hacked off and thrown into the bottom of a pit 6,000 years ago.

The people whose limbs were buried there, the archaeologists believe, were farmers—although one was torn off the body of a child. After their arms were thrown into the pit, dozens of full bodies were piled on top of them. Their arms were still intact, but their skulls had caved in.

It’s not clear exactly what happened to these people. The only thing we know for sure is that a horrible massacre happened here. Only losing an arm, the researchers believed, may have been a mark of social status—a more merciful penalty for living with a tribe that was to be wiped out.

The rest is unclear. We don’t know who killed them or why their arms were removed.[1] This pit, though, along with others like it, supports the idea that life in 4000 BC was often brutal and violent. 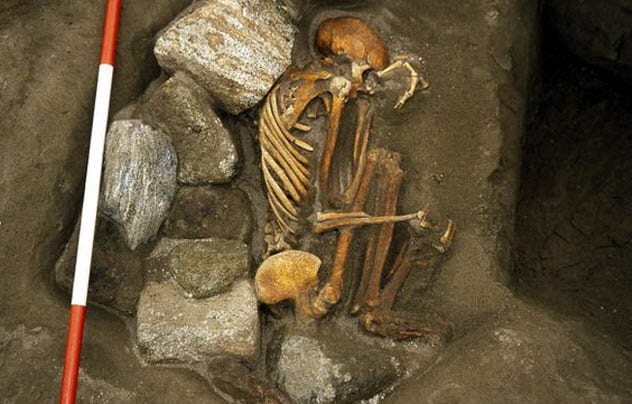 About 15 years ago, a team of archaeologists found the buried bodies of a man and a woman in Scotland. They had died 3,000 years ago, but they weren’t buried right away. Instead, their bodies were thrown into the Scottish bog where they were preserved and mummified for 300 to 600 years before they were finally put underground.

There was something wrong about these bodies, though. The woman’s jaw was a little too large for her skull, and the man’s limbs seemed out of place. After 10 years, researchers ran DNA tests on the bodies and discovered something disturbing and macabre: These were not the bodies of two people. They were the bodies of six separate people fused together[2] like a morbid jigsaw puzzle or like Frankenstein’s monster.

Whoever made these jigsaw corpses didn’t simply push bones together. The researchers believed that the bodies were still preserved when they were attached—with mummified flesh still on the bones. 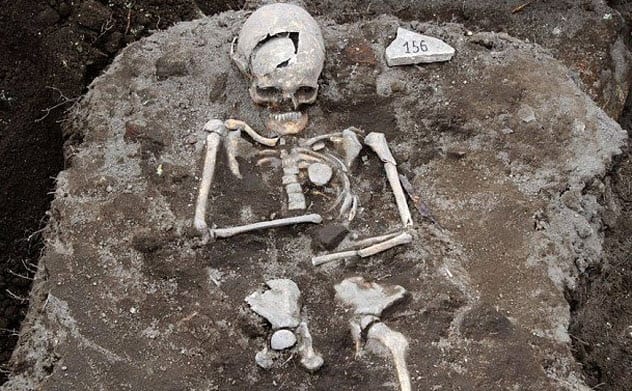 Archaeologists working in Bulgaria found a body straight out of a horror story. A steel stake had been driven through the man’s chest. His murderers, it appears, were terrified that he would not stay buried. They pinned his body to his tomb.

He died in the 13th century, and it was brutal. His left leg was removed and thrown carelessly into his tomb. It is likely that he was still alive when it was lost.

The stake, though, fits some of the ideas that were floating around the Romani people at that time. Vampires were thought to be real back then. A deformed appendage was a sign that someone had been resurrected by Satan[3] and could only be stopped by driving an iron stake through their heart.

It’s believed that this man was the victim of a horrible superstition. His countrymen had convinced themselves that he was evil, and they’d put him through hell to keep him from coming back.

7 The Man-Eating Animals Of Teotihuacan 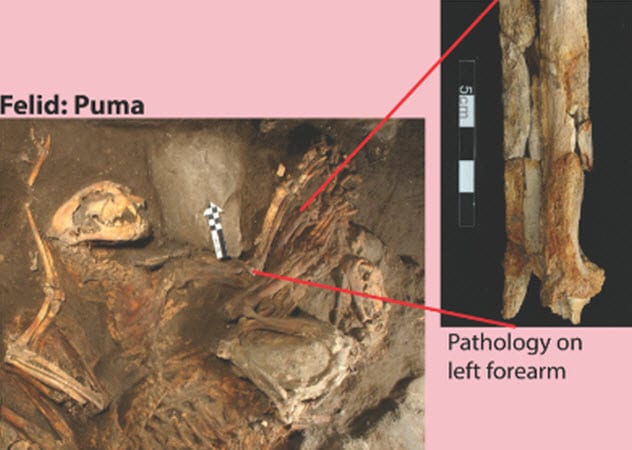 Inside Teotihuacan, the ancient Mesoamerican city, archaeologists found what appeared to be a den where animals were kept. Vicious predators, including jaguars, pumas, and lynxes, were kept there while they waited for the priests to sacrifice them to the gods.

The bones of the animals they had been fed were still there, thousands of years after they’d died. Scattered among the animal bones, though, archaeologists found another type of remains: the bones of humans.[4]

Testing on the remains of the animals themselves showed that they had traces of maize in their diet. In Teotihuacan society, maize was more likely to come their way by eating people than by actually eating vegetables. There is also artwork on the walls that shows these animals eating human hearts.

The priests in Teotihuacan, it seems, dragged people into these dens. Whether as a punishment or ritual, people were thrown inside with jaguars and pumas and became the animals’ meals. 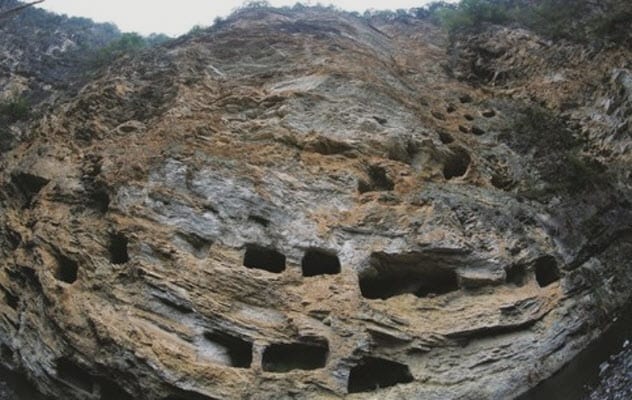 In Hubei, China, there is a man-made cave known as the Cave of the Fairies. Once, it was believed that magical beings lived in the cave. But when people actually looked inside, they found something altogether different. Hanging up to 50 meters (165 ft) over their heads were 131 old, decaying coffins.

Some of the coffins were hanging from wooden stakes, while others had been wedged into openings in the rocks. The coffins were huge.[5] Each one was carved out of a single tree trunk and weighed more than 100 kilograms (220 lb). Some, though, had been torn apart and ripped up.

These coffins were all 1,200 years old, put up by ancient Bo people. They had been hung up, it is believed, as part of a religious ritual meant to bless the dead and keep wild animals from eating their bodies.

The damage happened only 50 years ago. In the 1960s, it is believed, someone found the coffins and, instead of reporting the discovery, tore the wood out for firewood—desecrating an ancient grave to get a few moments of heat. 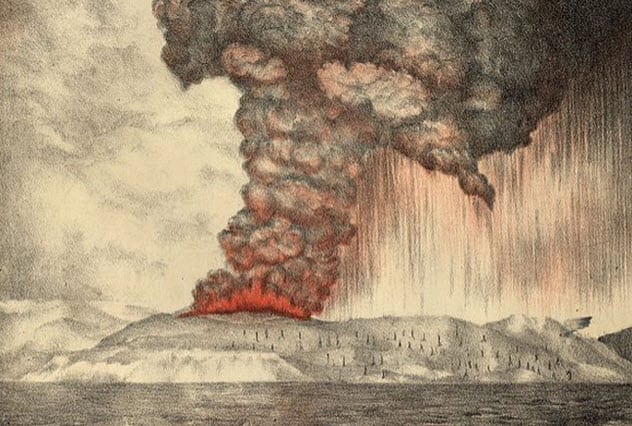 In July 1884, children at a mission school in Zanzibar were playing at the beach when they saw black, volcanic stones washing up on the shore. Excited and curious, they rushed over to gather the volcanic pumice. Mixed among the stones, they found human bones picked clean of flesh.

When their teacher reported it, she found out that it wasn’t the first time it had happened. Skeletons had been washing up[6] all along the shore of southeastern Africa. These were the remains of people in Sumatra and Java, where the Krakatoa volcano had erupted one year earlier. It had wiped out 36,000 people and eradicated an entire island.

For a year, the bodies of these people floated across the ocean on rafts of volcanic pumice. Then the skeletons washed onto the shore of Africa, drifting up on the beach where children were looking for rocks in the sand.

4 The Cannibalized Remains Of Herxheim 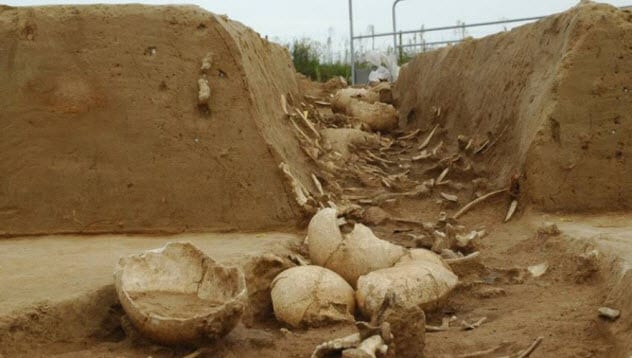 A construction team working in Herxheim, Germany, unearthed something absolutely horrifying. Underneath the ground where they had intended to build was a massive pit full of dead bodies—more than 1,000 in all.

The bodies had been resting there for more than 7,000 years. Whatever happened to them, though, was a fate worse than death. They hadn’t just been killed. Their skulls had been scraped clean.[7] Their ribs had been peeled from their vertebrae like a butcher preparing a pig. Some of the bones had been snapped and the marrow inside sucked out.

These people, it seems, were scalped, skinned, butchered, and cannibalized. This, though, was no act of desperation by starving people. There were more than 1,000 victims, and the way they’d been skinned was too ritualized. This was not a crime of passion or a temporary lapse of sanity. It was a planned ritual that a whole community had come together to perform.

3 The Shackled Skeletons Of Athens 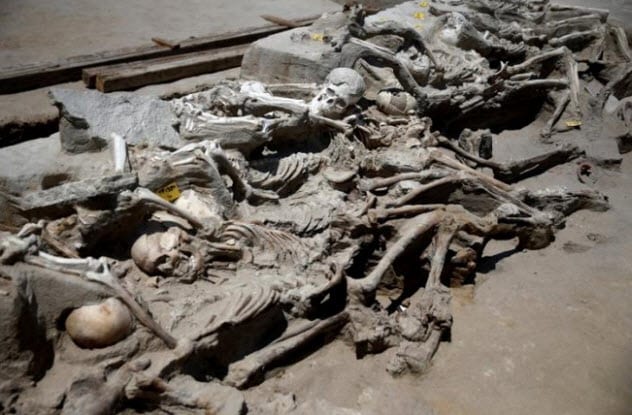 Archaeologists were investigating a necropolis in Athens, where respected people were gently laid to rest, when they found something out of place. Buried together were 80 skeletons, all with their wrists shackled above their heads before they were killed.

These were the bodies of young men who had been violently killed, apparently together. They had likely been shackled[8] in a row while an executioner had gone down the line taking them out. For all the horror in their deaths, though, they had been buried with respect.

We can only guess what happened to these men. But the archaeologists who found them think that they were nobles executed for staging a coup. Either way, the men certainly must have infuriated someone in power to have met their end in chains.

2 The Neolithic Genocide In Austria 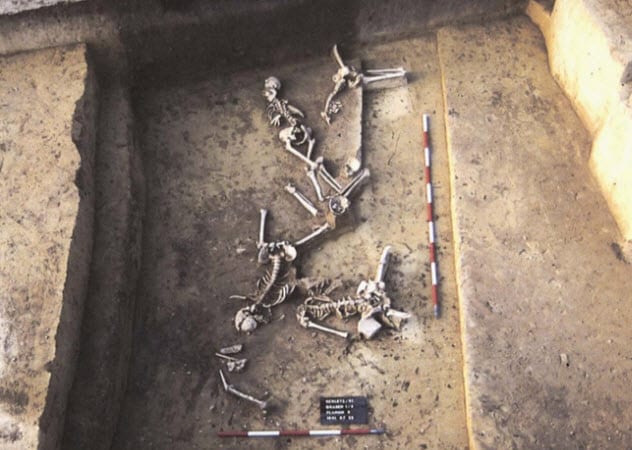 At a grave in Asparn-Schletz, Austria, a team of archaeologists found the remains of 67 people that told a horrible story. They had died in 5200 BC, running for their lives in what appears to have been the systematic genocide of an entire tribe.

The people were killed running, most beaten in the back of the head, though some were shot down with arrows. Some had their legs smashed and broken to keep them from getting away before their heads were crushed in. Even the children were killed. The bodies of 27 infants lay among the men.

Almost every body, though, was male. Only two women had been laid in the ground. The rest of the women, it’s believed, most likely had to watch as their husbands and children were killed. Then they were dragged off[9] and forced to serve the men who had murdered their families.

1 The Pits Of Severed Hands 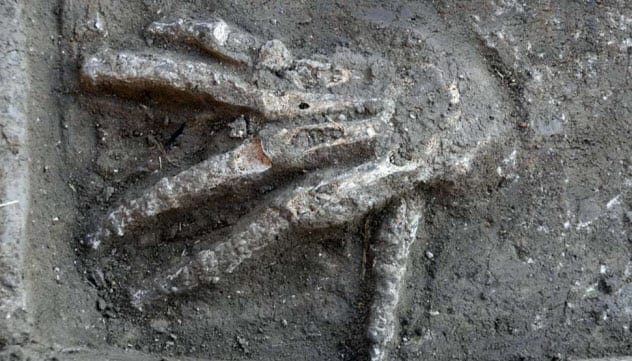 In a Hyksos palace in Avaris, Egypt, an archaeologist found four places where pits had been dug and filled with severed hands. There were 16 in all, chopped off of their victims before being brought to a palace and buried underground. Every hand was from a different person.

The biggest pit was right in front of the throne room, dug in a place where the hands would be closest to the king. They had been buried there 3,600 years ago when the palace was ruled by King Khayan. It seems he liked to keep a collection of his enemies’ severed hands.[10]

The discovery wasn’t entirely a surprise. Archaeologists had already found pictures across the area that showed soldiers trading the severed hands of their enemies for a package of gold. This, it seems, was how bounties were collected by the Hyksos. The king would reward these killers with gold—and he would keep the hands in his own home.