All too often, life can feel like a dystopian novel. Endless wars engulfing the Middle East, a semi-zombified population glued to their Twitter feeds, a creeping state surveillance . . . you know the drill.

But it’s one thing to say that life feels like a generic dystopia, and another entirely to buy a specific book and find the horrors of our modern world described perfectly by someone who has been dead for 20 years.

Whether you’re a liberal or a conservative, below you’ll find 10 novels from 10 authors which, taken together, explain all you need to know about the malaise afflicting modern America. The books are ranked from the merely good (#10) to the jaw-droppingly prescient (#1). 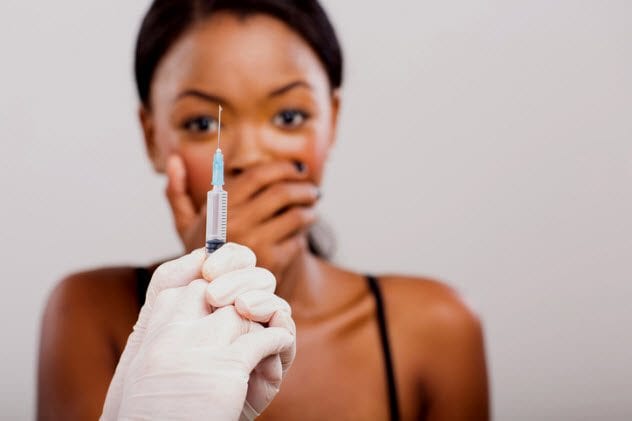 Imagine a world where your words counted more than your actions. Where it no longer mattered what you did, but whether you said and thought the “correct” thing. A world where having “incorrect” ideas could see you publicly ruined. Sound familiar? Written in 1940, Kallocain predicts modern political correctness with horrifying precision.

The work of Swedish writer Karin Boye, Kallocain is a dystopia where scientists have created a truth serum that will make you admit secrets even you didn’t know you had. The leaders of this world administer it to everyone. If anyone admits to having even a single “incorrect” thought, they are punished. Rather than actions, it’s your language, your subconscious bias, and your private ideas that will decide your right to exist.

Kallocain was written at a time when a Nazi invasion was terrifyingly possible, so its dystopian government is more fascism on steroids than angry campus activists. But as a rallying cry for freedom of thought, no matter how unapproved or incorrect those thoughts may be, it remains extremely relevant. 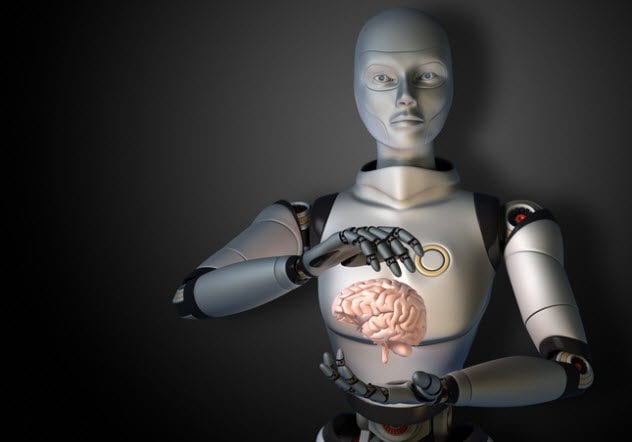 Machines take care of everything. All that’s left is a tiny, rapidly shrinking, super wealthy elite and a vast, depressed mass of humanity with no purpose, no money, and no hope.

Yep, that sounds a lot like a possible America in 2020 to us, too. And the parallels don’t stop there. The world of Player Piano is propelled by flat-out innovation that doesn’t take into account ethics, morality, or the possible consequences of new tech on the rest of us.

Just like we’re hurtling toward developing AI despite the fact that guys like Stephen Hawking and Elon Musk think it might kill us all, Player Piano is set in a world without brakes. Kurt Vonnegut would write better-known novels after this one, but he’d never again write one so eerily relevant to 2017. 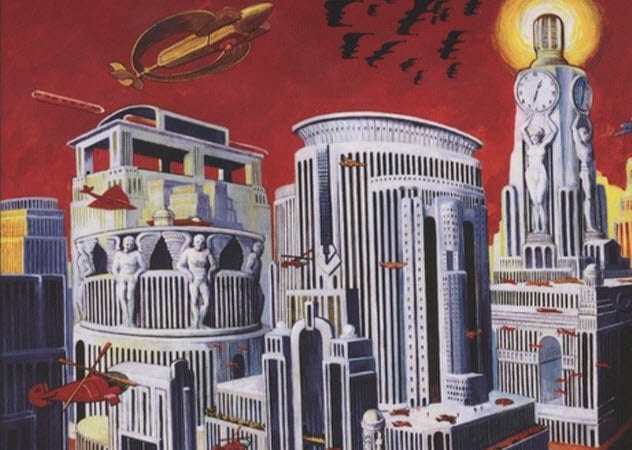 If you’ve ever read a dystopian novel, you’ve glimpsed a shadow of We. Published in 1924, We was ripped off by George Orwell, Aldous Huxley, and Kurt Vonnegut. Its ideas are echoed by everyone from Ray Bradbury to Ayn Rand. But We is more than just a kind of Ur-dystopia. It’s one of the most shockingly prescient books ever written.

In the 26th century, human drone D-503 lives on a planet where everyone watches everyone and equality is king. Beautiful people are surgically mutilated to remove the natural advantages their looks bring. Art is heretical because it is individual.

Everyone is forced to live in glass apartments, constantly under surveillance, while machines and math run everything. For modern readers, it has uncanny similarities to everything from big data and algorithms running our lives to being trapped at the mercy of an all-seeing NSA.

Zamyatin was a Russian socialist who’d been persecuted by the Soviet Union. Although he intended to satirize life under Stalin, he wound up accidentally glimpsing the 21st century.

7 The War With The Newts
Karel Capek 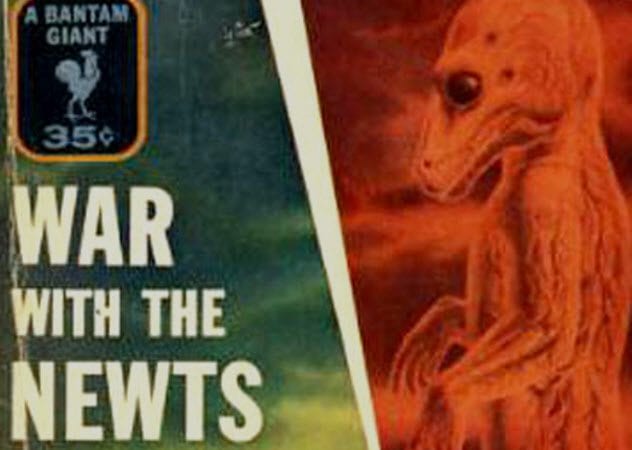 Czech writer Karel Capek was the guy who invented the word “robot.” That’s some impressive sci-fi chops right there, but his 1936 book, War with the Newts, really cements his greatness.

In the near future, humanity discovers and enslaves a species of intelligent newts. Humans exploit them, look down on them, legally restrict them . . . until the newts finally snap. The newts overrun the planet, and soon, humanity is the endangered class.

Capek’s book is deliberately wacky, but it’s also totally serious. The idea of an exploited underclass that turns on its rich, self-satisfied masters can be read in ways that give the book an urgency today.

What else were the Brexit and Trump votes but an exploited blue-collar class declaring “war” on a tiny, moneyed elite? Or, on the other side of the political spectrum, you could see the newts as America’s minorities, still forced to deal with the legacies of slavery and colonialism.

Capek wrote his novel as an urgent warning about the oppressed Weimar Germans launching a continent-wide war. Thanks to his genius, we can still interpret the book in new ways today.

6 Amusing Ourselves To Death
Neil Postman 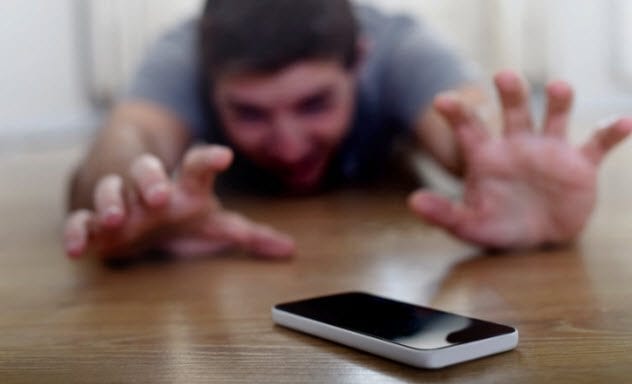 First things first: This book is an essay, not a novel. But it’s an essay that we’re pretty sure our readers will find freakishly familiar.

Written in 1985, it looks toward a near future where the need to be entertained trumps everything else. Where politics, religion, education, and daily life are all simplified and filtered through an endless array of screens to be liked or disliked by a placid populace. A world where a celebrity could use his knowledge of showbiz to become the most powerful person on Earth.

Basically, reading Postman’s book is like reading a hot take from 2017 that cheerfully concludes “we’re all doomed.” He predicts a world where context will disappear, clickbait headlines will manipulate us on a gut level, and complex decisions will be formed based on how entertaining or easy to understand each option is.

We repeat, this was written over 30 years ago. That it still has a lot to say about modern life is all kinds of terrifying. 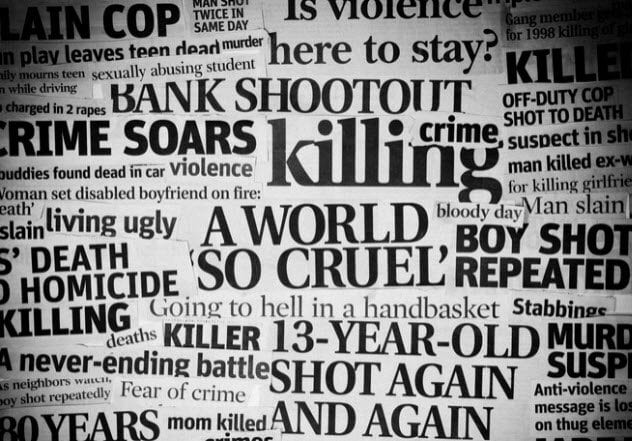 British writer J.G. Ballard was so pessimistic about the future that you could show him a headline from 2025 saying “All Disease Cured!” and he’d write a book about why that was a terrible thing. He wrote climate apocalypse dystopias, consumerist dystopias, and dystopias where architecture sends people on killing sprees. He also wrote a loopy experimental novel that could almost be about modern America. He called it The Atrocity Exhibition

Actually reading The Atrocity Exhibition is like reading a collection of short stories that Frank Zappa would dismiss as “too far-out,” but the central idea is still relevant. The main character (whose name keeps changing) lives in a world where violence is reported nonstop by the media. All this exposure to endless atrocities sends him into madness, leading him to recreate the most extreme violence himself in real life. 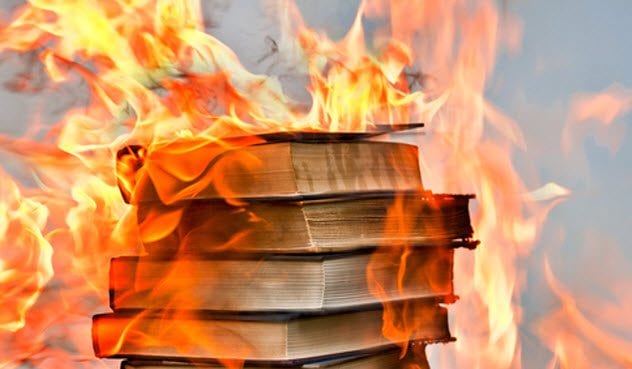 It’s a world where they burn books. That’s all that most of us know about Fahrenheit 451. The main character is a fireman, and, in Bradbury’s world, a fireman is someone who burns books.

While that is indeed the basic plot, there’s so much more to the novel than that. Aside from being a rallying cry for free thought and a way of raging against censorship, it’s also a book that hates TV and pop culture so much that it’ll make you want to smash your tablet.

Bradbury’s novel has something for everyone. If you’re worried by the religious right or the politically correct left censoring voices and stifling free speech, the book’s anti-censorship vibe will appeal to you. If you’re worried that brainless entertainment and political memes are numbing us to complex arguments, you’ll respond to its attacks on the sedative power of television.

Taken altogether, Fahrenheit 451 portrays a world where fear of giving offense has crept into outright censorship, while consumerism and mass media have made the population so compliant that they don’t even care enough to fight back. In many ways, such apathy is more worrisome than the cruelest totalitarian government. 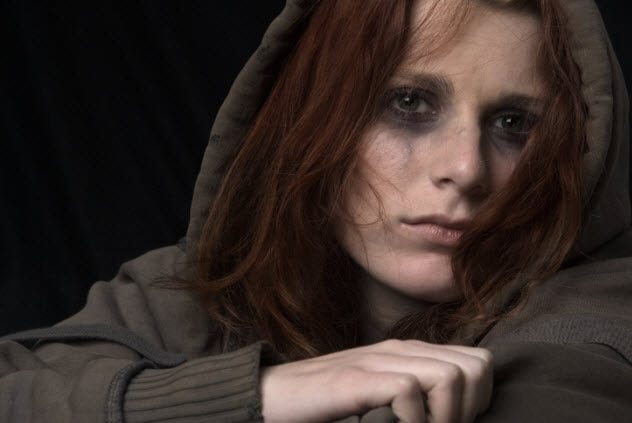 Published one year after the time in which George Orwell’s dystopia was set, The Handmaid’s Tale takes the idea of a nightmarish future and does something even scarier with it. The story imagines a world where things are utterly awful for half the population but almost utopian for the other half.

Where women have had all their rights stripped away and become nothing but property, but men have benefited by becoming the dominant class. Not only are America’s women essentially enslaved, they get almost no sympathy from their male counterparts.

That’s all sorts of spooky, but the truly creepy part about The Handmaid’s Tale is its rooting in history. Nothing that happens to the women in the novel hasn’t been sanctioned in some human culture or another in the past, from women being the property of men to being forced to carry their owner’s babies in place of the men’s wives.

As the medieval horrors unfolding in Syria show, when something has happened once, it can happen again. The Handmaid’s Tale fears for a future in which the antiwomen movement goes down a very dark path indeed. 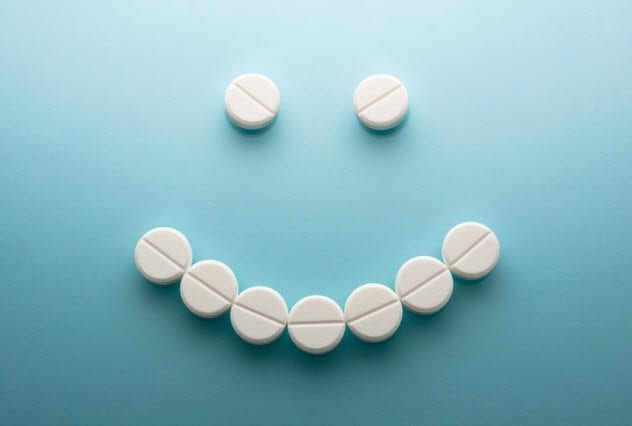 We mentioned just now that a dystopia where the population is apathetic is even worse than one that’s a living nightmare. Aldous Huxley’s 1931 novel Brave New World goes even further. It imagines a horrible future filled with perversion, totalitarian control, and genetic engineering. But this world makes its citizens so happy that they do not want things to change. In fact, the people actively like things as they are.

This is largely due to a drug called Soma, which is pushed on the citizens at every opportunity. Plenty of modern critics have noted the similarities between Soma and the sort of drugs that Big Pharma shovels down our throats, but there are other modern parallels, too.

Brave New World is a culture where thinking has been discarded in favor of trash entertainment and numbing your mind with new products or new experiences. A culture where people care more about what’s happening in the movie serials than how the government is controlling and exploiting their lives. 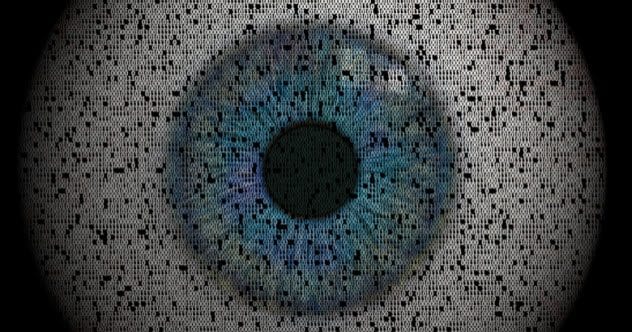 It’s a future where facts mean nothing. Where history is altered depending on what the ruling classes want it to say. Where your every move is watched by an unaccountable government that’s forever engaging in pointless, never-ending wars half a world away. Facts are lies, censorship is freedom, and surveillance is privacy. Welcome to Nineteen Eighty-Four.

Since President Donald Trump’s inauguration, Nineteen Eighty-Four has once again become a best seller, with many citing the administration’s approach to “alternative facts” as Orwellian. But, reading Orwell’s novel, it’s remarkable just how long the parallels have been evident.

What were the constant Middle East conflicts of George W. Bush and Barack Obama if not a fulfillment of the Party’s slogan “War is Peace”? What was the Obama-era revelation that the NSA was spying on all of us if not the discovery of America’s very own Big Brother? It’s even possible to look at Guantanamo Bay and see the creation of America’s very own Room 101.

The parallels aren’t perfect. Orwell was imagining a Britain under the boot of Communism, with a dictatorship as brutal as that of the USSR. But anyone who has been watching the news during the past couple of decades will find many of the author’s ideas scarily familiar. We can only hope that we learn the lessons of these dystopias before it’s too late.