Human beings are capable of constructing incredible structures. Today, many architects and engineers boast of designing cutting edge office blocks and other mega-projects. Sport arenas, monuments, and cathedrals are all a testament to our ability to build. In the modern world, though, we have the help of technology like laser cutting equipment and massive mechanical drills and cranes.

Builders in ancient times didn’t have these luxuries. So how they managed to build monolithic and precise structures is perplexing us to this day. We’ve compiled a list of the ten best ancient structures we still don’t understand.

The abandoned megalithic city of Nan Madol is a terrific example of architecture and art that demands us to imagine what we assume was possible in ancient times. Built on a lagoon adjacent to Pohnpei’s shoreline, Nan Madol comprises about 100 artificial islets spreading over 150 acres of land. The city could comfortably house over 1000 people. Historians believe Nan Madol to have been a ceremonial and political center for the Sau Deleur dynasty chiefs (c.1100-1628).

What makes the city even more befuddling is that the builders of Nan Madol relied solely on the weight and positioning of each stone column, not mortar, to secure the buildings. Oral histories of the city tell tales of gigantic birds moving the basalt columns into place. While the city’s exact architecture and engineering elude us, we know that it took a tremendous economic and ecological system to support such an undertaking.

No list of mysterious ancient structures would be complete without mention of the blocks of Puma Punku. The site forms part of a temple complex located in Bolivia, the Andes Mountains. Historians believed that the creators of Puma Punku built it sometime between 536-600 AD. Many scientists, however, argue that the stone structures are much older. So, what makes these stones so unique? The stones are massive, with the largest weighing approximately 131 tons. This is twice the size of most modern-day earth moving equipment. Yet somehow, people of the time managed to bring these stones to this site 1420 years ago. How they moved them, no one knows.

Puma Punku has an altitude of 12,800 feet. That is high up in the mountains, so whoever moved the blocks had to work twice as hard. At this height, Puma Punku is above the natural tree line. This means that no trees grow within the area, and they wouldn’t have used wooden rollers to move the rocks. The most mind-blowing mystery is the kind of engineering used in shaping the blocks. The blocks have precisely cut forms and shapes. The stones are also magnetic. Maybe our ancestors were not as primitive as we like to think.

Asuka is a village located in the Takaichi District of Japan. The village has its origin in the Kofun Jidai period of 250-552 AD. Asuka has sparked an immense historical interest. Within the larger mystery of the village itself lies 20 famous stone structures. Till today, no one knows the creators of the structures. The biggest and most unusual of these mysterious structures is one dubbed Masuda-no-Inafune, translated as ‘the rock ship of Masuda.’ The stone structure stands 11 meters long, 8 meters wide, and almost 5 meters in height. The stone weighs approximately 800 tons.

There are no definite answers as to why, when, or who made these rock structures. However, numerous beliefs and suggestions have been put forward in an attempt to explain the unusual designs. Masuda-no-Inafune is located in a region with many Buddhist shrines and temples. Therefore, it is easy to speculate that Buddhists may have carved the stone for ceremonial or religious purposes. However, the large stone structure does not exhibit any Buddhist styles of construction.

Twenty-four coffin-shaped black boxes were discovered by archeologists in a hillside cave at Saqqara, near the pyramid of Djoser. The boxes are solid Aswan granite, which is hard to even scratch with modern-day equipment. What makes this an even more extraordinary engineering feat is the engineered tolerance of the boxes. The boxes are massive, weighing well over a hundred tons each. These megalithic structures are airtight, making us believe that they were for an important purpose. Each of the boxes’ lid is granite cut and individually weighs about 30 tons.

The level of stone cutting skill applied to these structures makes it hard for anyone to believe Egyptians made them. The skillfulness is so accurate that aliens could only have achieved it, and the Egyptians only appropriated them. These mysterious boxes have not yet found a definitive explanation of why they exist or why they’re 24 in number.

6 The Walls of Sacsayhuaman

The Incas are a rich hub of historical information. Cusco is home to many Inca ruins, but one of them stands out for many reasons. Located in the city’s northern outskirts, Sacsayhuaman remains one of the world’s most stunning ruins. The Incas built this former capital of their dynasty like a fortress. However, not much of the complex remains intact today. Most of what remains is an outstanding wall that befuddles the historians and scientists of today. Like most of the Inca structures, the walls are super heavy rock boulders that fit together like pieces of a jigsaw puzzle.

The boulders are irregularly shaped but so tightly spaced that you can’t fit a needlepoint between them. The walls rise to over 6 meters, and the longest of the walls is 400 meters long. The walls are so astounding that when Spaniards took over Cusco, they began tearing down the walls believing that only demons could have built such a structure. However, most of the boulders were too heavy for the Spaniards to move. How the Incas managed to shape and pile these boulders into a perfect fit remains a puzzle. 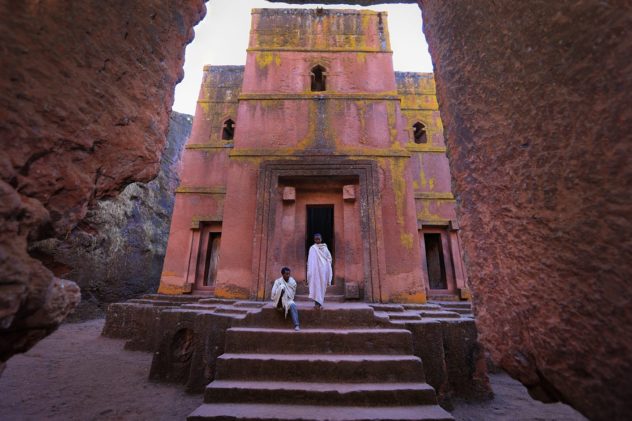 Lalibela’s 11 ancient rock-hewn churches are a shred of evidence that Christianity has existed for more years in Ethiopia than in any other country. Religion has had a strong place in this country since 330 AD despite having high poverty levels and instability. The monolithic structures go as deep as 40 to 50 feet below the earth’s surface. Cross-shaped openings serve as windows, ventilation, and even drainage for rainwater.

Many theories attempt to explain the origin of these astounding churches. The most popular hypothesis is that the 12th-century emperor of Ethiopia, King Lalibela, gave orders to construct these worship places. The small museum at the churches’ entrance propagates this theory but only has a fragile ax-shaped adze for proof. Even without nine centuries of wear, the tool looks more suited for farming than carving hard rock. Local worshipers who use the underground churches add a more divine twist to this theory. They believe that King Lalibela could complete the 11 churches with an army of angels in just a single night.

For as long as anyone could remember, myths of human-made caves had been part of local lore in Shiyan Beicun, Zhejiang in China. This was until one man decided to put the myth to the test. He rallied the local community, and they purchased a huge hydraulic pump that they used to drain the town’s pond. After 17 days of pumping, they were astonished to find  hand-dug caves  at the bottom of the pond. To date, archeologists have discovered 35 similar caverns in this region after staying hidden for millennia. These caverns are carved from siltstone and descend to almost 30 meters below ground level.

The construction of these caverns still eludes us even with modern archeological research and examination equipment. Considering the rate at which an average human would dig with tools of the time, it would take 1000 skilled artisans working 24 hours straight over many years to complete such a project. Even more mysterious is how they managed to move the caves’ rubble and where they dumped it. There has not been a single trace of the 1 million cubic meters of stone removed from the caves.

3 The Moray Terraces of The Incas 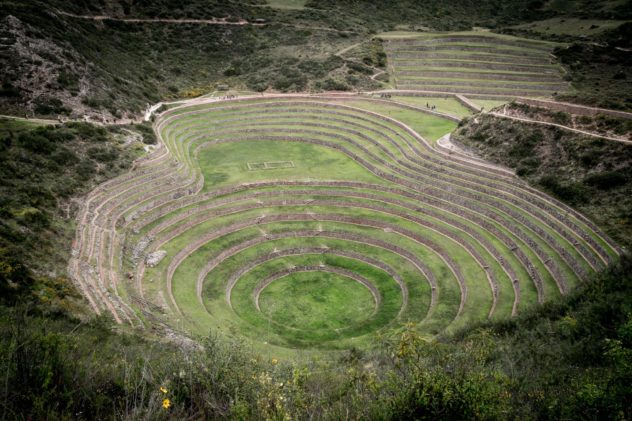 Moray, about 50km northwest of Cusco, Peru, is home to one of the most mysterious and stunning Inca ruins. The ruins are of an ancient amphitheater-like structure with concentric terraces that run around the depression. The biggest of the terraces are at the center and descend approximately 150 meters to a circular bottom.

One of the most intriguing features of this structure is that the bottom is so well-drained that no rainwater can collect in it. This ensures that even the most plentiful of rains can’t flood  the Moray terraces. Another remarkable feature is that there is a vast temperature difference of as much as 15°C exists between the bottom and top reaches of the ancient structure. The temperature difference creates several micro-climates on the terraces, suggesting that agriculturalists had once used the moray to study the impact of different climatic conditions on crops. We might never understand the Moray terraces’ purpose, but agricultural research is a likely possibility.

2 The Treasury at Petra 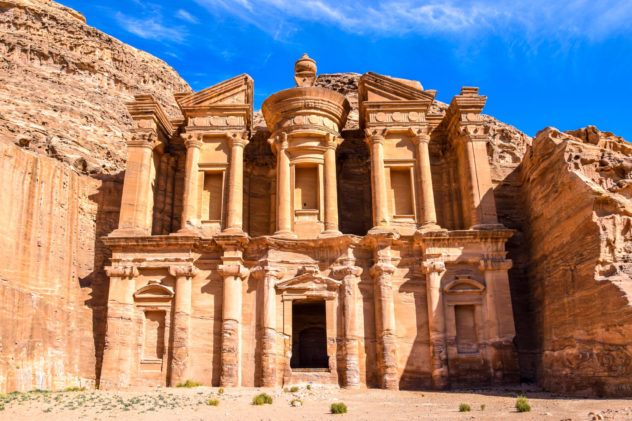 Archeologists and historians estimate that the Treasury’s construction at Petra took place in the 1st century BC. The structure design has no precedent in the region, and we can only assume that it was the work of Hellenistic architects in the near east. Scientists and historians have not yet established the purpose of  the Treasury.

The Treasury got its current name from a popular Bedouin belief that the structure’s giant stone urn, the tholos, was used as a hiding place for pirates’ ancient treasures. The Bedouins tried to release the treasure by periodically firing at it. The bullet holes are still visible on the walls of the urn.

Although we don’t know its creators or purpose, the builders certainly wanted to make an impression. Not many buildings today can match the aesthetics and beauty of this ancient structure. The building’s design is quite simple. The layout features one large central chamber and two smaller ones flanking the porch on both sides. The treasure is built high on the side of a cliff. Below the ancient structure are several small rooms and tombs. 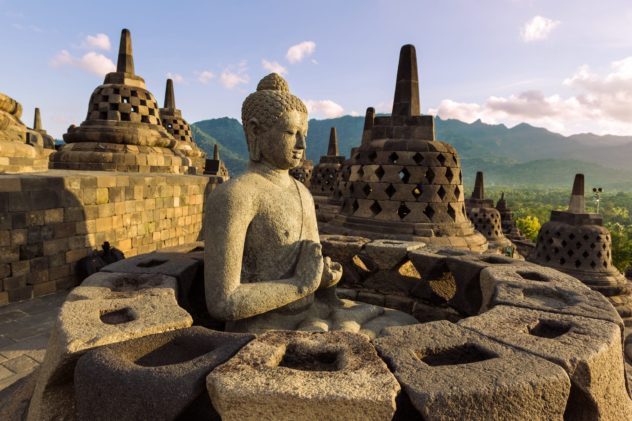 The  temple at Borobudur  is another ancient structure that is shrouded with mystery. To this day, the world’s biggest Buddhist temple still leaves some big question marks about its construction. Historians estimate it to have been built in the 8th century by the Shailendra dynasty. Historians estimate the construction would have taken a whole century to complete due to its vast size and artwork. However, archeologists suggest that the structure’s initial design was one giant stupa built around five balustrades. The builders later altered the design to feature three stupa levels around one great stupa due to fear that it would collapse. The temple’s design closely resembles a Mandala, which leads to speculations that Indian Buddhists constructed the Borobudur.

Over 504 statues adorn the temple. The central dome has 72 stupas surrounding it, and each has a statue placed inside. An equally mysterious unfinished Buddha sculpture lies inside the main stupa. This awe-inspiring statue is massive and surrounded by a lot of theories about its origins.

While we may not understand how the structures were made, we are glad we can study them and marvel at the work that has survived.

Top 10 People Who Vanished in Airplanes