Coming up with hundreds of imaginary monsters is tough work. There are only so many permutations of wings, claws, and teeth that you can attach before you start repeating yourself.

The creators of Pokemon turned to many sources to help spur their inventions. Some Pokemon are thinly veiled versions of real creatures, but others draw their inspiration from myth and legend. Here are 10 Pokemon that may be more familiar than you realize. 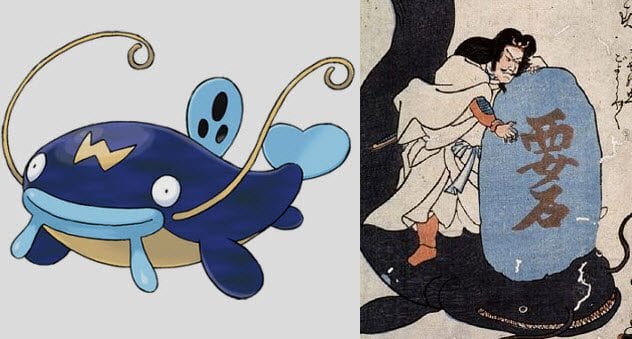 Whiscash is a Generation III Pokemon. This water/ground type Pokemon resembles a large catfish with enormous barbells—the “whiskers” from which it takes its name. The Pokedex entry for it describes the Pokemon as extremely territorial. When threatened, it will cause earthquakes by thrashing around.

Namazu is a figure from Japanese mythology. Namazu is one of a number of mischievous spirits that cause calamities. His own special province of disaster is earthquakes. Interestingly, this spirit shows himself in the guise of a giant catfish. Woodcuts of the period show the astonishing resemblance between Whiscash and Namazu. 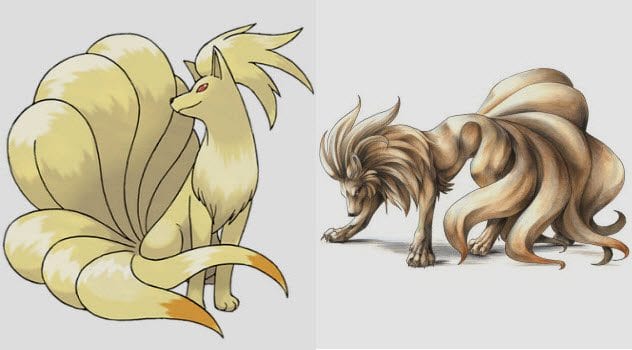 Ninetails is a fire Pokemon which evolves from Vulpix. Vulpes is the Latin name for “fox,” so that makes Vulpix’s origin obvious. Ninetails is rather more difficult to understand, though not its name—Ninetails has nine tails. The Pokedex entry tells us that Ninetails uses its sinister red eyes to gain complete mastery over its foe’s mind.

Kitsune is the common Japanese word for “fox.” But more than that, it is a species of Japanese spirit which takes the form of a fox. As they age, these kitsune grow extra tails. When they grow nine tails, they turn white—just as Vulpix evolves into the white Ninetails.

Another clue to Ninetail’s folkloric origin is that reference to taking over another’s mind. Kitsune-tsuki is Japanese for “fox possession.” A person possessed by a kitsune will act erratically, angrily, and manically. 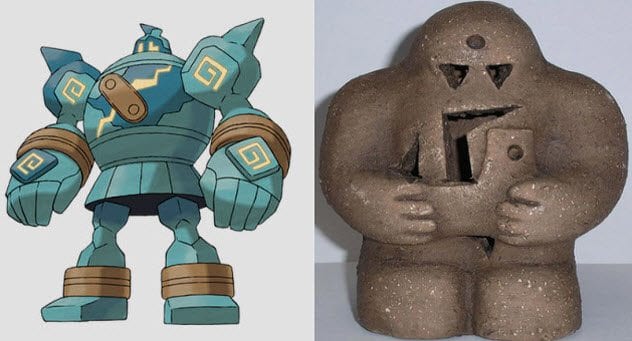 Golurk are vast Automaton Pokemon. They are said to have been created by ancient people with the goal of protecting humans and Pokemon alike. They look artificial and are marked by strange angular symbols.

In Jewish folklore, the Jews of Prague were suffering one of the all-too-common persecutions. To help his people, a rabbi created a golem—a huge clay figure. He animated this golem by decorating it with mystic signs.

This golem then acted as a protector for the Jews of Prague. Many figurines show the golem with patchwork braces holding it together, which are similar to those borne by Golurk. 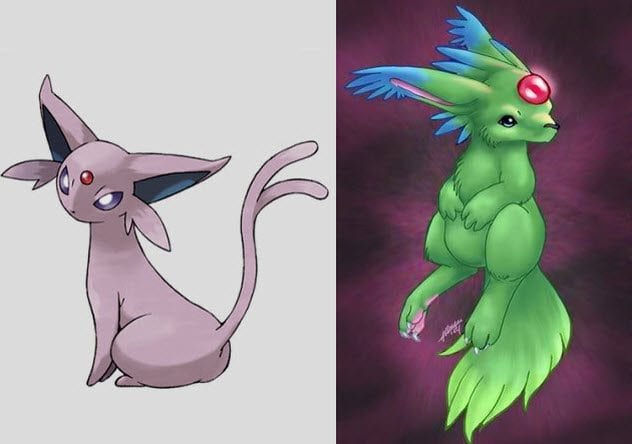 Espeon is a catlike, psychic Pokemon whose main difference from a cat (apart from being magical) is the split in its tail. They are said to be very protective and loyal to their owners. As we shall see, this is a major departure from their source.

Bakeneko are Japanese spirits. They start as normal cats. But as they age, they begin to walk on their hind legs. Bakeneko can light their way with their fiery tails as well as start blazes with them. Bakeneko may even have the ability to change their shape into a human form to cause more mayhem. Most distinctive is the Bakeneko’s split tail.

Another mythical creature has more than a passing resemblance to Espeon. When Europeans reached South America, they hunted a creature called a Carbuncle. This animal was said to be similar to a cat and dog but with a jewel in the middle of its forehead. Just like Espeon. 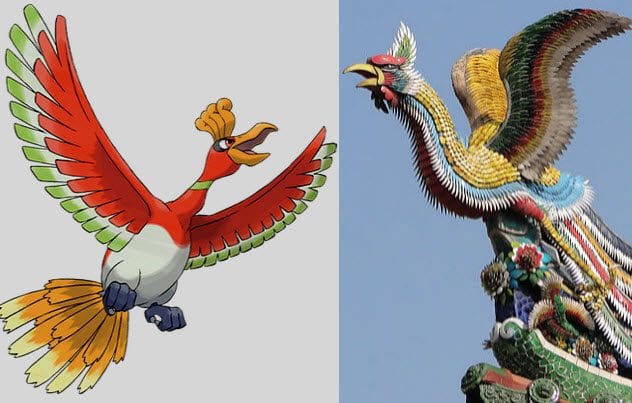 Ho-Oh is a legendary Pokemon, a fire bird that is said to appear only to the purehearted. It flashes its colorful wings and lives at the bottom of a rainbow. Its feathers bring joy to those that own them.

A fire bird? Many countries have the myth of the phoenix.

The phoenix is a magical bird that gives birth by catching fire and being reborn from the ashes. In China and later Japan, the phoenix became a symbol of the emperor. The Asian phoenix is one of the four Celestial Guardians of the Direction. In China, the bird was known as fenghuang. In Japan, it took the name ho-o.

Where have we heard that one before? 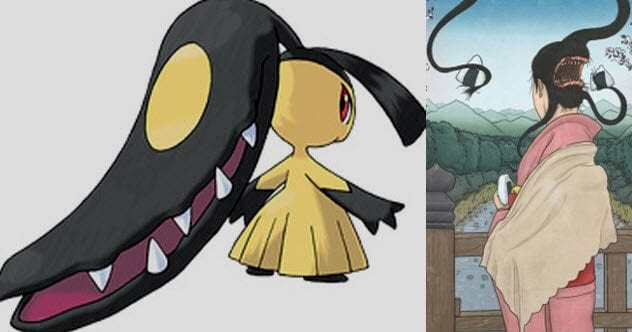 Mawile is listed as a Deceiver Pokemon. It has a placid, docile face. But hidden behind its head is a monstrous pair of jaws waiting to devour its opponents. Behind the Pokemon is an equally dangerous legend that should teach us to always treat our spouses well.

Futakuchi-onna is a woman. While that should not be terrifying, she does have one attribute which sets her apart. Futakuchi-onna has a ravenous mouth hiding underneath her hair.

In some legends, she is a shape-shifting demon. But in others, she is a woman who has simply not been given enough to eat. This hunger drives the development of the mouth on the back of her head. To feed this new void, her hair acts as prehensile tentacles which bring food to it. 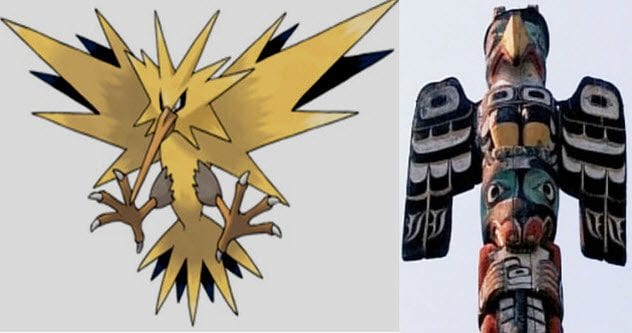 Zapdos is another of the legendary birds of the Pokemon universe. As its Zappy name suggests, this Pokemon is an electric type that drops bolts of lightning on its enemies. The Pokedex tells us that Zapdos lives in thunderclouds and controls lightning.

There is a widespread belief in Native American mythology in the thunderbird. The thunderbird creates the sound of thunder by flapping its wings. Thunderbird is so large that it snatches whales from the ocean in the same way that eagles grab fish.

So it’s not much of a surprise that it is a bit noisy. Thunderbird hunts underwater creatures by flinging lightning. This mimics the weakness that water Pokemon have to electric attacks. 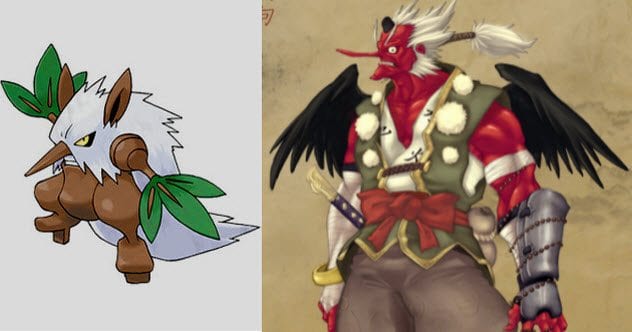 Shiftry is a Dark/Grass Pokemon that makes its appearance in the Generation III games. Shiftry live in ancient trees and use their fanlike hands, which are made from leaves, to blast their enemies with wind.

Shiftry are said to act as forest guardians. They also have psychic powers, which make them able to read their opponents’ minds. They are shifty trees indeed.

Tengu are long-nosed Japanese goblins who live in forests and mountains. Tengu fill the traditional trickster role that all mythologies seem to have. They have psychic abilities and dislike liars.

Forest tengu have been known to tear apart those that damage trees and woods because they live in the trees. Some types of tengu hold a fan in one hand which they use create devastating winds. They are also shown wearing geta, a type of sandal which closely resembles Shiftry’s feet. 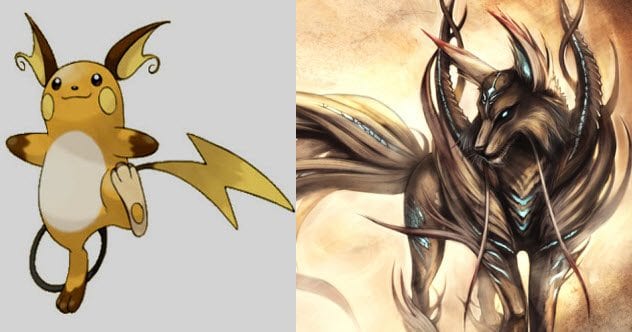 Ask someone to name a Pokemon, and chances are they will name Pikachu, the cute and cuddly “electric rat” which starred in the anime series. Pikachu evolves into the less adorable Raichu, though it still keeps its electrical powers.

Thunder and lightning are such awesomely powerful things that they have inspired all world mythologies. For the Japanese, the power behind lightning was Raiju—the thunder beast.

Raiju is much like his near homophone, Raichu. He is a four-legged mammalian creature in control of the forces of lightning. None of the sources agree on what Raiju looks like, only on his vaguely cuddly appearance.

As Raiju is sometimes pictured as a wolflike animal, some have seen it as the basis for Manectric, the electric wolf Pokemon. Manectric is closely associated with lightning, its nest being found at the site of lightning strikes. 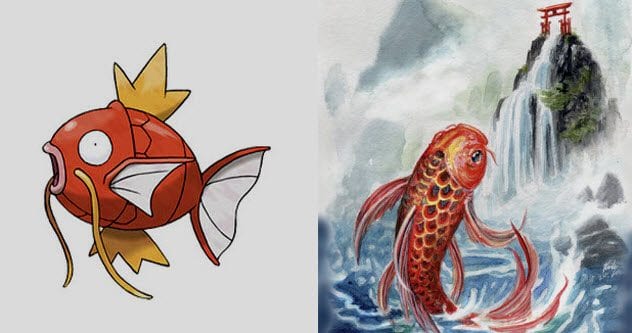 Magikarp is one of the most frustrating Pokemon from the original game. It is common and virtually useless. The Pokedex itself describes this Pokemon as “pathetic.” Catching a Magikarp when fishing is more annoying than catching a cold.

Its one virtue is that Magikarp becomes a terrifyingly powerful Gyarados—basically a dragon—when it evolves. Anyone familiar with a certain Chinese legend, however, would have expected this metamorphosis.

According to legend, at the top of a waterfall which crashes down a towering mountain is a fall known as the Dragon’s Gate. While many carp swim against the rush of water, few reach the top. Even fewer make the final leap over the Dragon’s Gate.

Those that do make the jump are transformed into enormous and powerful dragons. Those looking for proof of this outlandish tale would do well to look at a Chinese dragon. Their scales are a reminder of their more modest pass as carp.