The Titanic will forever be remembered as one of the deadliest maritime disasters in history, yet little is known about countless other maritime catastrophes around the globe. The following list details ten horrific 19th-century shipwrecks, all of which saw significant loss of life in an unforgiving and perilous era. 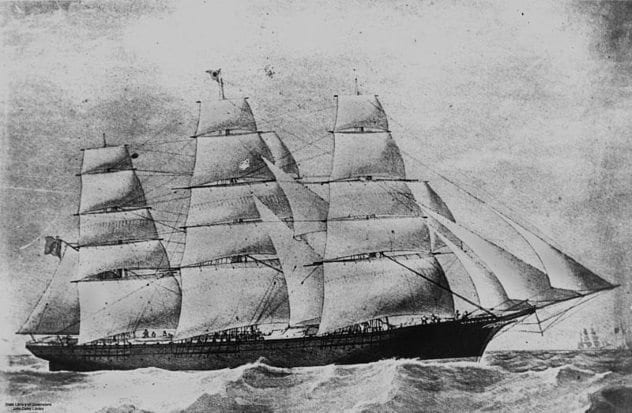 The name Fiery Star is irony at its best, considering that the ship met its end in a fury of fire. Having left Brisbane for London, the Fiery Star sailed for nearly two weeks without incident until April 20, 1865, when it inexplicably caught fire roughly 640 kilometers (400 mi) from land. Seeing that flames were quickly gaining ground, 80 passengers—including the captain—took to the four lifeboats onboard. Regrettably, 17 passengers remained on the burning ship, as there was no room for them on the boats.

As the captain and 79 others sailed away, those left behind controlled the flames for 22 days until it was apparent that their efforts were futile. In what would have been the crew’s final hours on Earth, the Dauntless appeared in the distance and ultimately rescued all 17 onboard. Hours later, the Fiery Star sank to the bottom of the ocean. As for the 80 passengers who were thought to have escaped death in the lifeboats weeks earlier, they were never heard from again. 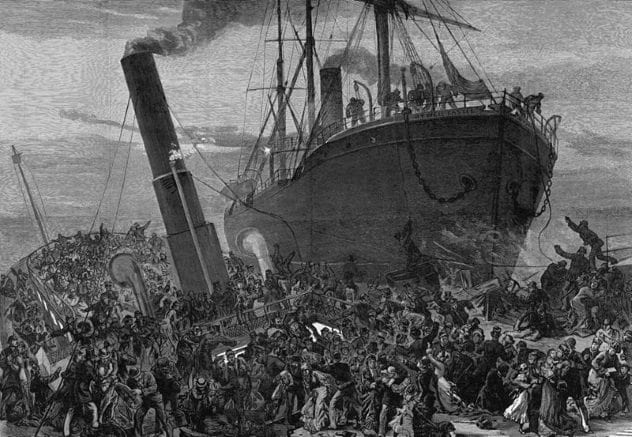 In the 1870s, excursions down the River Thames were popular outings for a growing population of Londoners. Such attractions brought over 700 passengers onto the SS Princess Alice for a routine trip near London Bridge on September 3, 1878. That evening, the ship was within sight of the North Woolwich Pier when a substantially larger ship, the collier Bywell Castle, appeared downriver. The Bywell Castle struck the Princess Alice, splitting the ship in two. Within four minutes, the entire vessel sank with over 650 passengers, many of whom were trapped below the deck.

The point of collision occurred where the ship’s sewage was stored, discharging large volumes of fermenting feces downriver. It is believed that many succumbed due to asphyxiation from the horrendously overpowering gasses. The following week, the Princess Alice was lifted, and the bodies that remained unidentified were buried in a mass grave.

The disaster brought about an official legal process for dealing with mass deaths as well as a review of the rules and policing of the River Thames. To date, the Princess Alice catastrophe remains the highest loss of civilian life in British territorial waters. 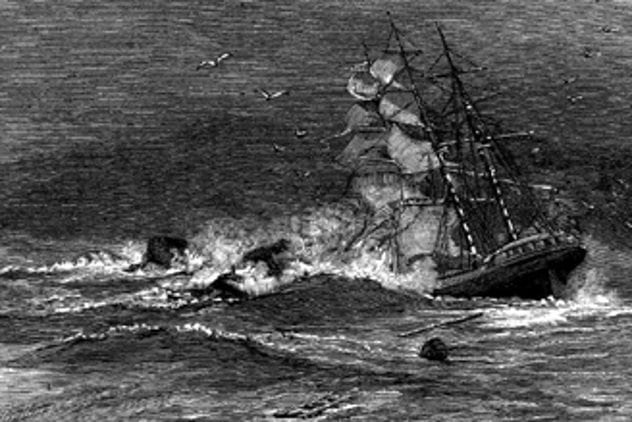 On August 4, 1845, the West Coast of King Island became the scene of Australia’s worst civil disaster, with the wreck of the Cataraqui claiming 400 lives. In the early morning hours, the Cataraqui crashed on jagged rocks 137 meters (450 ft) offshore, causing an immediate flood in the lower cabins. As ferocious waves pummeled the decks, scores of passengers were washed overboard to their deaths. Those who didn’t drown found themselves on the jagged rocks, where they were battered to death by the vigorous waves. The few lifeboats that were able to launch were immediately capsized by the surf, drowning all occupants aboard. Throughout the day, the ship gradually collapsed until it fully disintegrated, casting those who desperately clung to the wreckage into the cold waters and their doom.

Surprisingly, 30 passengers remained the following day, clinging to lines that were strung along from the wreck. In a last attempt at survival, they struggled to swim to shore, but only nine made it. Coincidentally, the survivors were greeted by David Howie, a man who had been stranded on King Island following his own boat’s wreck. As time passed, the castaways buried the 342 bodies that washed ashore. Five weeks later, they were rescued and taken to Melbourne. 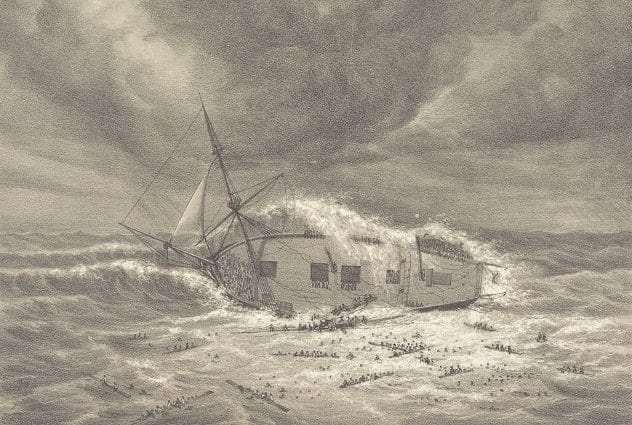 In 1842, the convict ship Waterloo was sailing from London to Australia when the captain had to make a detour following an outbreak of scurvy. The wooden ship, which was built 27 years earlier, was quite dated even for its time and was no match for the rocky headland of South Africa’s Atlantic coast. While anchored off of the Cape of Good Hope on August 28, heavy winds and fierce currents rolled the ship on its side, snapping the aging vessel in two.

The prisoners shackled and caged belowdecks were guaranteed to drown, so the captain ordered for them to be released to give them some chance of survival. However, reports indicate that most people, including sailors, didn’t know how to swim in the 19th century. Thus, few made it ashore. Of the 190 people who drowned, 143 were convicts, and 14 were children of the crew. Although they escaped with their lives, the prisoners who managed to swim to shore were hastily recaptured and sent to Van Diemen’s Land (today known as Tasmania) on another ship. 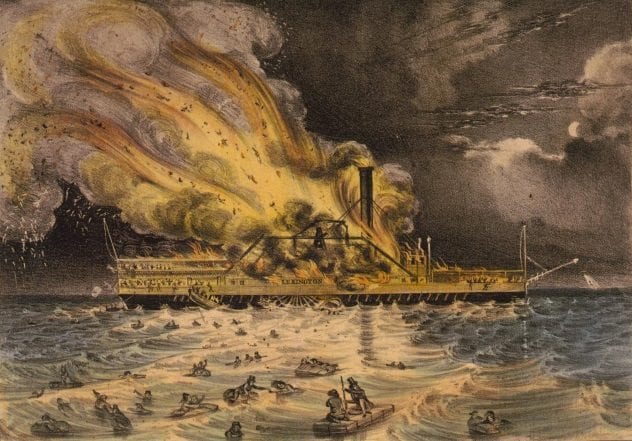 The fastest vessel for its time, the Lexington would come to be known as the first great steamship disaster in history, having sunk just 6.4 kilometers (4 mi) from shore. “Through by Dawn” was the ship’s motto, given her reputation for strength and resiliency as well as the guarantee of a quick trip. These were the reasons why the Lexington was chosen for her fateful January 1840 voyage from New York to Stonington, Connecticut. She would face subzero temperatures, strong winds, and high seas.

The Lexington was mid-journey on the evening of January 13 when a bale of cotton caught fire, setting all the cargo ablaze. High winds fueled the flames, and the hopeless vessel was sent drifting endlessly to the north. Passengers who survived the fire only prolonged their lives by minutes, dying either by drowning or freezing in the icy waters. The lifeboats that launched were met with violent wakes, capsizing and drowning all aboard. In the end, 154 died. Only four survived the ordeal, including the ship’s captain and a man who drifted on a cotton bale for 48 hours before floating ashore near Baiting Hollow, Long Island. 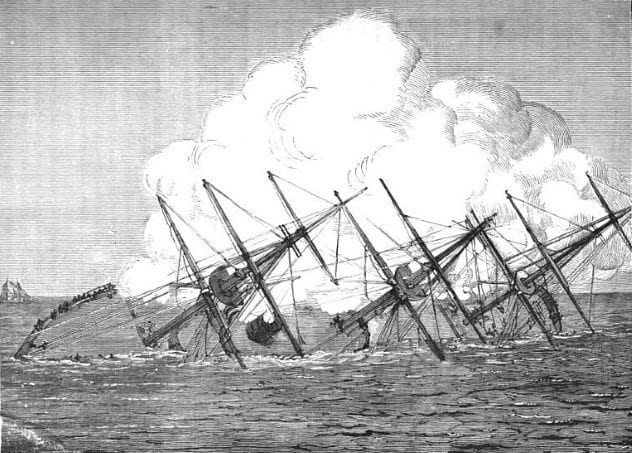 In the 1870s, Germany’s new Imperial Navy sought to be independent from foreign shipbuilders and thus constructed one of the first armored German ships, the SMS Grosser Kurfurst. On May 31, 1878, during military exercises, the Grosser Kurfurst was sailing in the English Channel beside a much larger armored flagship, the SMS Koenig Wilhelm, when two small boats abruptly crossed the bows of the German vessels. An emergency maneuver by the Wilhem caused the flagship to crash into the side of the Kurfurst, tearing off her armor plating and subsequently spilling the crew into the sea. The newly constructed and presumably sturdy Kurfurst sank rapidly, taking 284 crew members with her.

The Wilhelm, although afloat, sustained a considerable amount of damage. Having served as the most powerful vessel in the Prussian Navy, Germany acquired the flagship following Prussia’s military demise. The power and prestige of the Wilhelm (which included armament suiting, gun installations, and torpedo tubes) was exceptional, and the loss of the flagship would have been an immense setback for Germany’s naval fleet. Repair work for the ship began almost immediately following the disaster and spanned from 1878 to 1882. 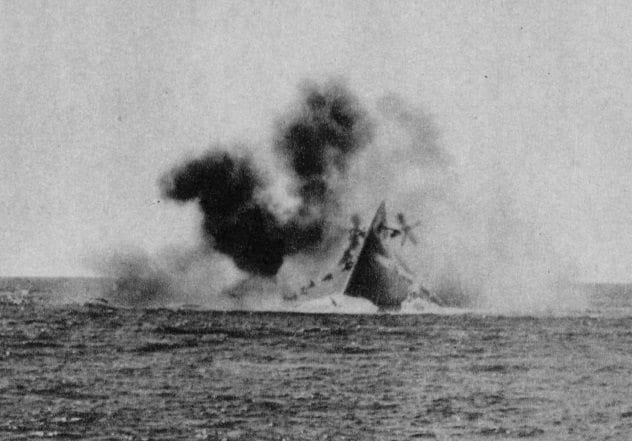 British admiral Sir George Tryon was commander of one of the world’s biggest battleships as well as a skilled fleet tactician noted for maneuvering fleets with great precision at rapid speed. Unfortunately, on June 22, 1893, a miscalculation—and perhaps an inflated ego—caused Tyron to misjudge the distance between his flagship HMS Victoria and another vessel.

After giving the order to turn the Victoria around, Tyron was warned by commanding officers that the maneuver was too narrow and that collision was imminent. Fellow officers were well aware of the danger that Tyron neglected to see and initially disobeyed his order until the admiral irately exclaimed, “What are we waiting for?” Moments later, the officer’s wards were instantly crushed, and the Victoria was left with an enormous gap in her hull.

As the ship sank perpendicularly, those who weren’t sucked down into the deep were torn in half by the moving propellers. Horrified by the consequences of his unnecessary command, Admiral Tyron turned to his men and said, “It’s all my fault.” As dictated by tradition, Tyron remained aboard and went down with his ship as well as 353 of his sailors.

In 2004, the wreckage of the Victoria was discovered at a depth of more than 150 meters (500 ft), standing completely vertical at the bottom of the sea. 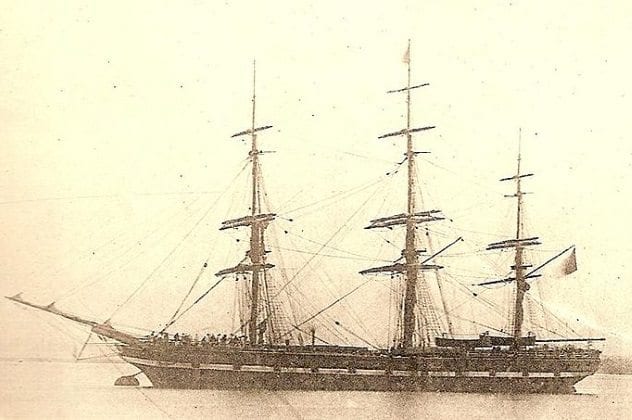 On January 22, 1873, the Northfleet was anchored off of Dungress with 379 souls onboard. The majority of passengers were construction workers and their families, who were sailing to Tasmania to construct a railway. At around 10:30 PM, a 300-ton Spanish steamer, the Murillo, emerged from the darkness at an alarming speed, slamming into the anchored ship. The unsuspecting passengers sleeping belowdecks were fiercely awoken to their vessel being cut down to the waterline. Meanwhile, the Murillo disappeared callously into the still night from which it had emerged.

The Northfleet‘s crew didn’t initially realize the extent of the damage, so distress signals weren’t immediately initiated. Given the numerous ships in the vicinity, no aid was rendered. One ship, in particular, the Corona, was only 270 meters (900 ft) away but was unaware of the unfolding catastrophe, since the ship’s watchman was asleep.

As panic finally ensued, the Northfleet’s captain armed himself with a revolver, desperately trying to get the women and children onto lifeboats, but to no avail. The Northfleet, whose cargo was mainly iron, sank to ocean floor, claiming 320 lives, including the captain’s. Following the disaster, boatmen were rewarded for every corpse recovered that had not been washed ashore.

Several months later, the Admirality Court ordered that the Murrilo’s Captain have his certificate suspended for one year on the grounds that he did not render any assistance after colliding with Northfleet. 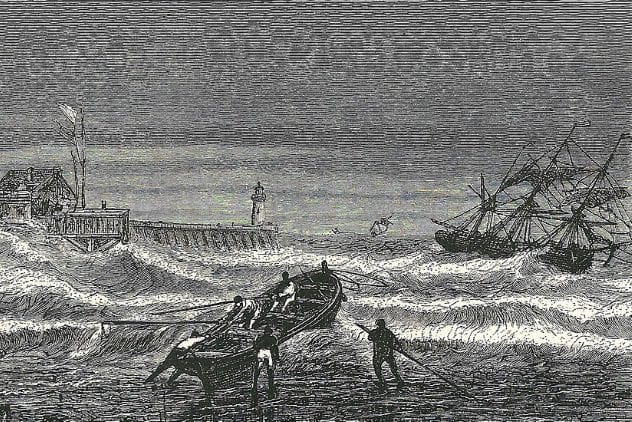 Of the 168,000 convicts who sailed to Australia, one in 280 died in a shipwreck. One of those disastrous voyages ended on August 31, 1833, when the Amphitrite, a female convict ship, sank within yards of the French coast at Boulogne.

Driven by tremendous winds, the Amphitrite ran aground on a sandbank while French locals watched in horror from the shore. Any and all attempts made by the French to save those on the doomed vessel were rejected by Captain Hunter, who feared that the convicts would escape once on land. Desperate to survive, the women broke out of their cells belowdecks, pleading with Captain Hunter to allow for their rescue. For 90 minutes, 108 female convicts and 12 children remained on deck “uttering the most piteous cries” up until the moment that the ship broke in two.

As the days passed, body after body washed ashore. A total of 133 people died, including Captain Hunter. Only three survived. 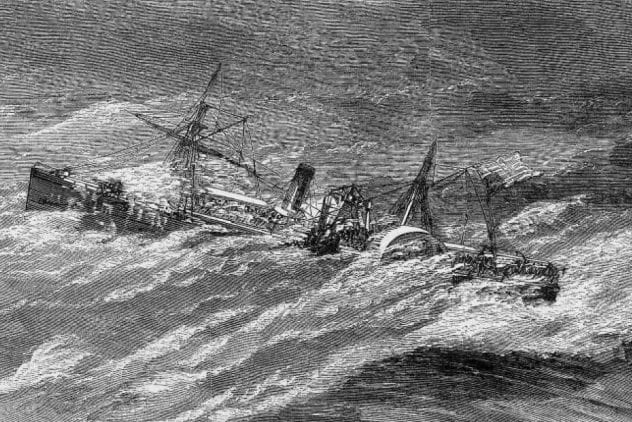 In September 1866, the Evening Star departed New York for New Orleans with 278 onboard. The passengers were a peculiar group, consisting of frail women, musicians, actors, circus performers, and an opera troupe, none of whom would be expected to help much in the face of disaster. Finding themselves trapped in the middle of a hurricane, however, resulted in gallantry fueled by dread. The deck was littered with garments and priceless jewelry, all of which were tossed aside by frantic women helping to bail the water that cascaded onto the ship from the mountainous waves.

As the hours passed, the chances of survival became more dismal, changing the courageous passengers into murderous fiends. Drunk crew members claimed lifeboats for themselves and bludgeoned and stabbed any and all who attempted to come aboard. Meanwhile, the frantic passengers helplessly stranded in the water were crushed, lacerated, or decapitated by the crashing debris.

Of the 24 passengers who made it into lifeboats, only ten survived by drinking their urine for the two days they were adrift prior to rescue. The 14 who died resorted to drinking seawater, ultimately becoming delirious, thus allowing death to come quickly. Upon their demise, the crew’s routine was appallingly the same: Rob the deceased of any valuables and then toss their remains overboard for the sharks that lurked in the distance.