The Huns were an enigmatic, multiethnic confederation that controlled massive swaths of the Eurasian Steppe between the first and fifth centuries AD. They swept in from the East, displacing entire civilizations in their wake. Almost nothing is known of these mysterious warriors, and what few historical accounts survive are predominately anti-Hun propaganda. To this day, their origin, language, and impact remain shrouded in mystery. 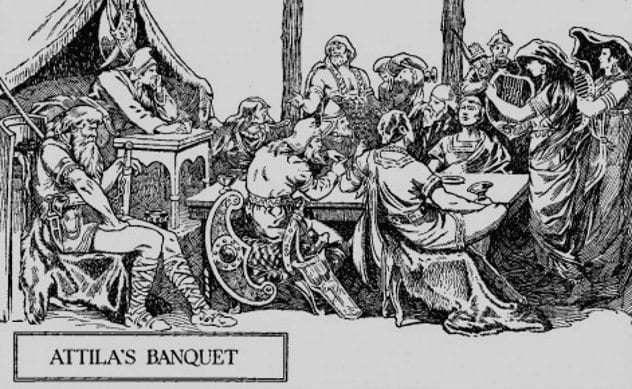 Attila the Hun has long been known in the West as “the scourge of God.” This was propaganda against the pagan king of an empire that stretched from the Black Sea to France. Historian Jordanes referred to Attila as, “a lover of war, yet restrained in action, mighty in counsel, gracious to suppliants, and lenient.” According to Priscus, he was also a man of his word. From 440 AD onward, Attila refused to attack the Romans, as they paid their yearly tribute of 318 kilograms (700 lb) of gold.

Attila was born some time in the fifth century into a Hunnic royal family. As a child, he was trained in horsemanship, archery, lasso, and military strategy. However, he also mastered Latin and Gothic so that he could do business with his neighbors. Reports describe Attila as dressing simply, without any ostentation. And while he entertained guests with fine meals served on silver plates, Attila ate only meat off wooden planks. 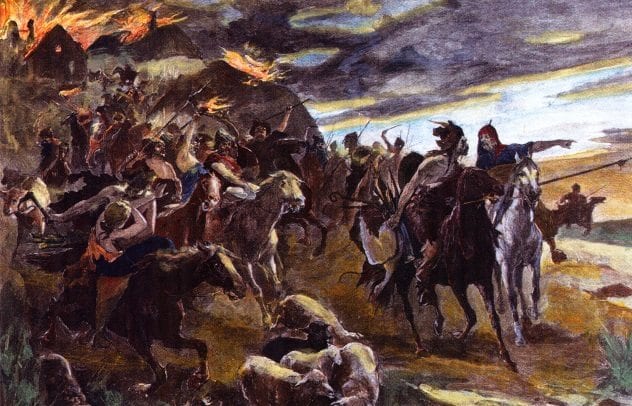 According to historian Peter Heather, “We do not know what language the Huns spoke and probably never will.” Many believe Hunnic was a Turkic language. However, at the time of Hunnic expansion, this language family was restricted to Central and Eastern Asia. Scholars have attempted to analyze the Hunnic tongue through names of peoples, places, and tribes. However, most of these monikers come from a period where Germanic had become the lingua franca of the Huns.

Chinese annals state that Hunnic was very similar to the language of the Toles, a Turkic tribe. Modern Chinese researchers define it as a “proto-Altaic” language. The Byzantines claimed that Hunnic was the same as the language of the Avars, Bulgars, and Szeklers, the latter of whom claim descent from European Huns. Others believe Slavic speakers are the true inheritors of Hunnic. The reality is that the Huns’ enigmatic language is preserved across many Eurasian Steppe tongues. 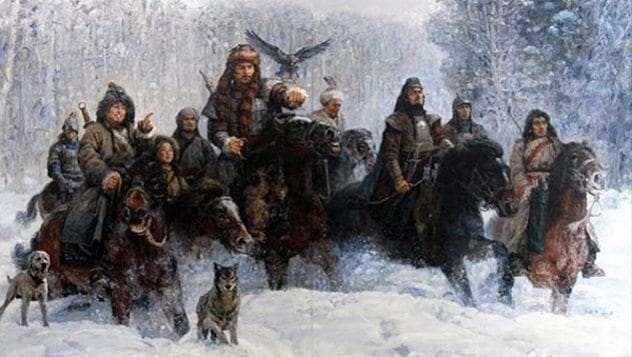 Between 300 BC and 450 AD, a mysterious group of steppe warriors known as the Xiongnu terrorized China. Repeated invasions by these barbarians prompted the construction of fortifications that would later become the Great Wall. To this day, the identity of the Xiongnu remains a mystery. The prevailing theory holds that they were Siberian Mongols. Others believe they were either Turkic, Tocharian, Uralic, or some melange of all of these. One theory holds that the names “Xiongnu” and “Hun” have the same origin.

In 129 BC, war broke out between the Xiongnu and the Han Empire. Eventually, the Han won, destabilizing the kingdom of their northern neighbors. The Xiongnu faced civil war between 60 and 53 BC. In AD 89, after the Battle of Ikh Bayan, the southern Xiongnu became part of the Han Empire, while the northern Xiongnu were expelled from Mongolia. Some believe they continued west, where they became the Huns. 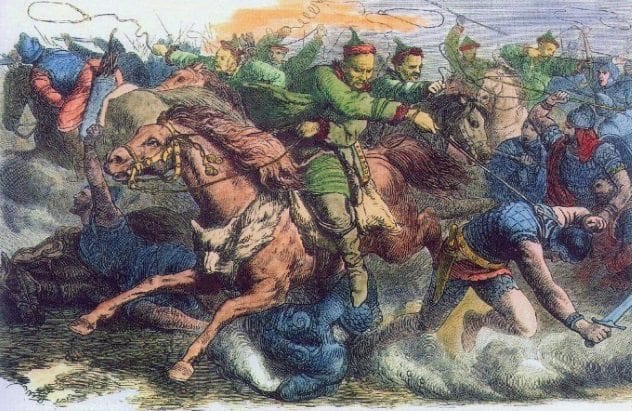 The Huns were among the most feared horsemen to ever cross the steppes. Their cavalry consisted of horseback archers made up of lesser nobles and their retainers. They wore loosely woven garments and light armor with either sewn-on scales or linked plates. Accounts state that the armor could sustain blows from the front but was vulnerable around the armpits, suggesting a sleeveless design. The majority of Huns were simply equipped. Nobles and mercenaries could afford more outlandish garb and gear.

During the fourth century, the Huns pushed westward. First, they encountered the Alans, whom they decimated. The Huns incorporated the few surviving Alans into their ranks and continued on to the lands of the Goths. In the 370s, the Huns demolished the Goths, and Greuthung king Ermanaric committed suicide. The Huns pushed the Goths up to the banks of the Danube, right on the Roman Empire’s doorstep. 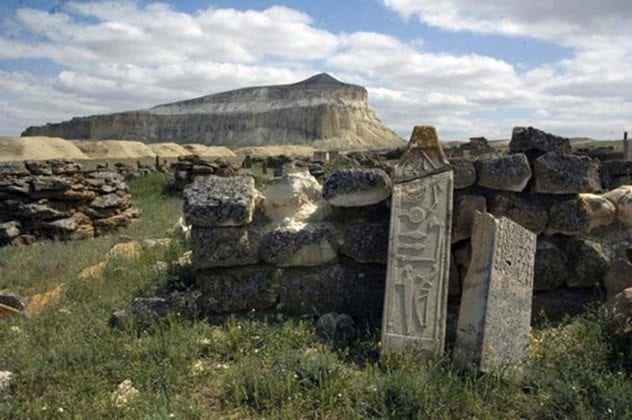 In 2016, archaeologists announced the discovery of a 1,500 year-old stone complex in Kazakhstan, built by the Huns. Located on the Caspian Sea’s eastern shore, Altynkazgan is larger than 200 American football fields. The site’s smallest stones measure 4.2 meters by 4.2 meters (14 ft x 14 ft). The largest are astronomical, reaching 34 meters (112 ft) by 24 meters (79 ft). Carvings of creatures and weaponry adorn select stones.

Researchers also discovered a silver saddle cloaked in images of deer, wild boar, and mysterious “beasts of prey.” Researchers believe the designs (or tamgas) were initially carved into leather before they were glued to wooden boards. Finally, silver plates were laid over the shapes. The site was initially found by a local man using a metal detector in 2010. Researchers also discovered two bronze pieces, which were probably part of a whip. At the time the complex was built, the Huns were migrating across the steppes from homelands in the East toward Europe. 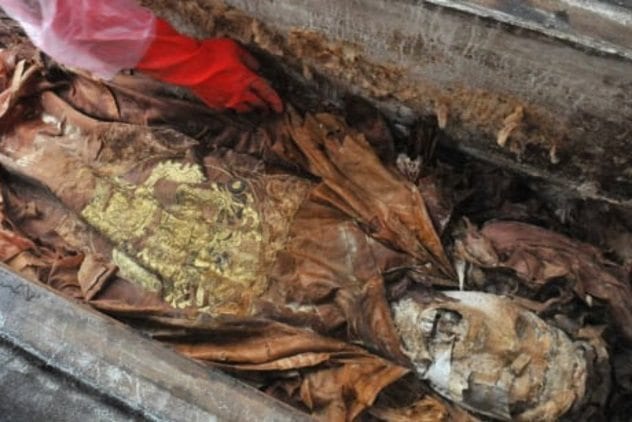 In March 2014, archaeologists announced that they had found the tomb of Attila the Hun. Construction workers laying the foundations for a bridge in Budapest discovered an ancient burial chamber. The sixth-century sepulcher contained horse skeletons, a sword of meteoric iron, and various Hunnic grave goods, along with human remains. According to historian Albrecht Rumschtein of Budapest’s Lorand Eotvos University, the find was “absolutely incredible” and “definitely seems to be the resting place of the almighty Attila.”

Slight problem: There is no Albrecht Rumchstein, and the remains belonged to a Chinese Ming-era mummy. The story was a promotional stunt by fake news site World News Daily Report. Ancient accounts indicate that Attila died on the night of his wedding to Gothic princess Ildico. According to legend, his men diverted a river and buried Attila in the riverbed. The workers were then slaughtered to keep the grave’s location a mystery. 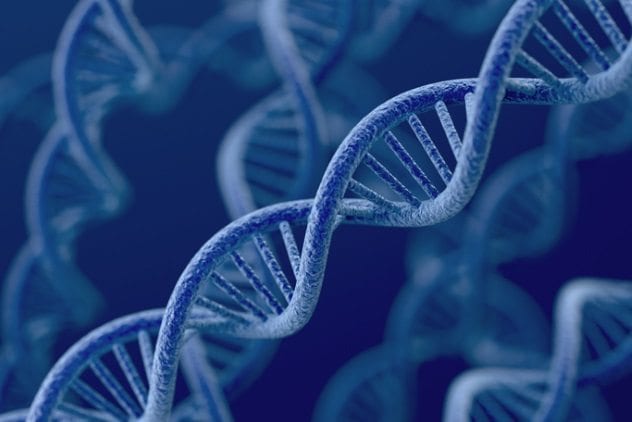 While investigating the impact of Huns on European DNA, researchers discovered that haplotype Q was the likely genetic core of these Asian invaders. The Huns were predominately carriers of Q1b and Q1a2 Y-chromosomes. Native Americans are predominately Q1a3a. This suggests that Huns and Native Americans share an ancestor from about 18,000 years ago, most likely from the Altai Mountains.

Not every Hun was Q. Accounts note that they were a multiethnic confederacy. What’s more, not every European in the Q group is descended from Huns. The Q haplogroup appears prominently in Sweden as a result of spreading northwest out of Siberia. Unlike the Mongols, the Huns did not have an Asian homeland to return to. As a result, they assimilated into the cultures they encountered and left descendants across the steppes. In Eastern Europe, Q1b and Q1a2 cluster just east of the Rhine and north of the Danube—corresponding to Hunnic territories. 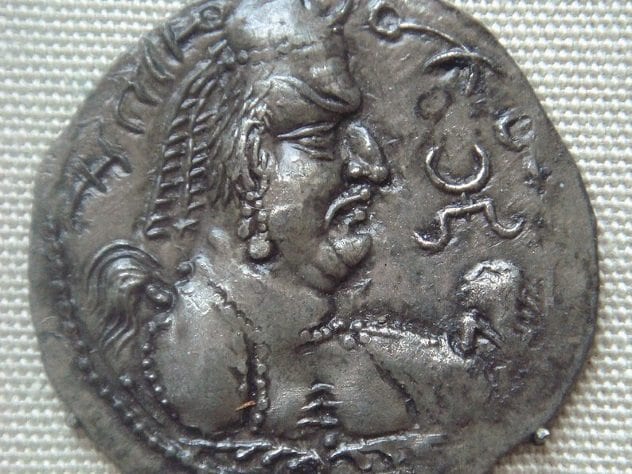 In the mid-fifth century, Central Asian warriors known as the “White Huns” descended upon the Indian subcontinent. Until the arrival of Muslim conquerors in the 12th century, these Huns became the ruling class of Pakistan and Northern India. The foreign conquerors were absorbed into Hindu culture. However, the Hun invasions broke the local chain of historical tradition. Some sources go so far as to say, “No authentic family or class traditions go back beyond the Huns.”

Little is known of these White Huns. Most Chinese sources trace their origins to Southern Kazakhstan. Others indicate Central China. In a sixth-century account by Procopius of Caesarea, they were Hunnic in both stock and name. Most believe that “White” does not refer to complexion but rather to geographic orientation. The northern Huns were known as the “Black Huns,” the southern Huns were “Blue” and “Green,” and the White Huns came from the West.

2 Hungary And The Huns 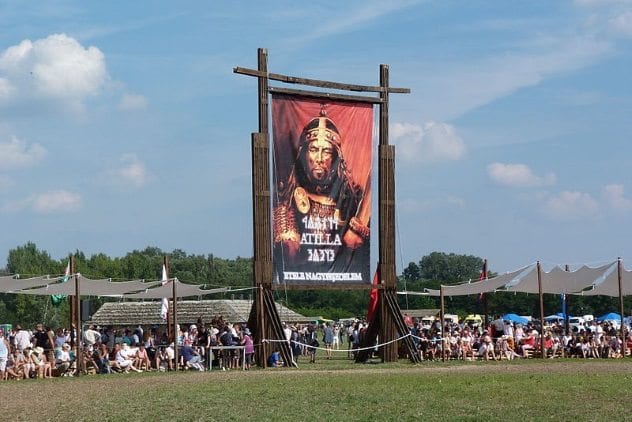 Every two years, the Hungarian village of Bugac holds a summer festival known as Kurultaj. In 2016, this tribal assembly of Hun-Turkic nations saw 250,000 attendees from around the world. However, the festival was primarily attended by Hungarians, proud to celebrate their deep connection to the East. The Magyar, originally from Central Asia, settled Hungary around 900 AD—four centuries after the death of Attila. However, Hungarian lore has long maintained that the Magyar were descendants of the Huns.

In the 19th century, the idea that Hungarians have Central Asian origins developed into a movement called Turanism. Its roots were deeply political and were used as ammunition in the struggle for the nation to liberate itself from the Germanic Hapsburg Empire. To this day, Attila is considered the father of the Hungarian nation. “Attila the ancestor” theory is far more glamorous than the competing idea that obscure Finno-Ugric tribes gave rise to modern Hungarians. 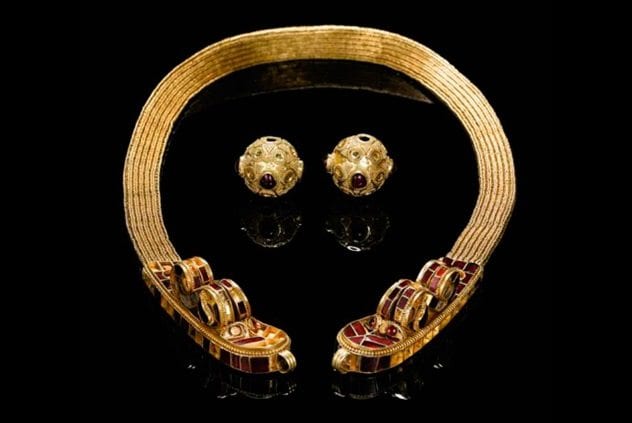 In December 2014, the Kyrgyzstan Ministry of Culture announced that a fifth-century Hunnic gold collar recently sold by Sotheby’s had been taken from the country illegally. On December 3, the “Umutkor collar” sold for a staggering $380,215. Sansyzbay Umutkor acquired the woven gold necklace set with glass and garnets around 1890. The high-status artifact with dragon-head terminals remained in his family’s collection in Bratislava until 2013.

East Hunnic jewelry is extraordinarily rare. Finding a complete royal collar in the homeland of the Huns is “nothing short of spectacular.” The Huns introduced dragon- and beast-head-terminal necklaces and torcs with their expansion west. This style of jewelry has popped up from Central Asia to the Carpathians. Huns were master goldsmiths. However, they relied on imported, precut stones—like the ones in the Umutkor collar. It is unknown whether the piece was intended for a man or a woman.