Mysterious ruins and artifacts remain tantalizing, but they can only bring so much information to the archaeological table. The written word and etched picture can patch history a lot quicker.

Carvings especially make lasting “stone pages.” They can reveal much about ancient law, revolutions and wars, and personal insights into first contact between continents. Even environmental reports can survive for thousands of years. Sometimes, archaeologists find inscriptions unlike any they’ve ever seen before. 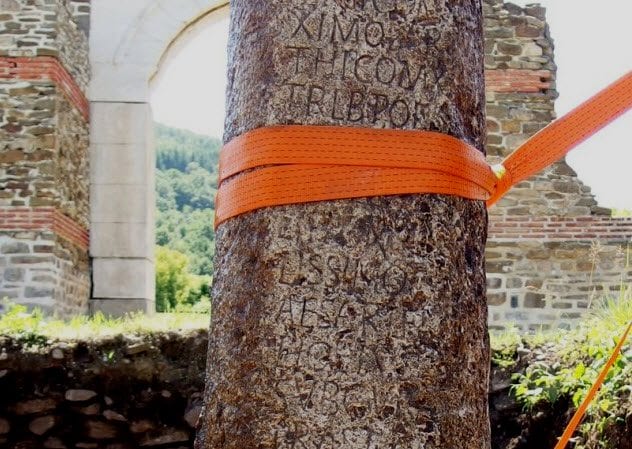 Central Bulgaria was once home to several Roman forts. The Sostra Fortress has been excavated since 2002 by the National Museum of History. In 2016, the same team investigated a Roman road station nearby and stumbled upon a large artifact.

Having gone unnoticed before, the 2.2-meter-high (7.2 ft) object was a roadside pillar dating back to AD 244. Nineteen lines are inscribed on its surface, honoring Roman Emperor Philip the Arab and his son, Philip the Younger. The official prose also names the provincial governor Prastina Mesalinus.

The emperor, who reigned from AD 244–249, traveled across the Balkans during his first year of obtaining power and might have stopped over at the Sostra Fortress, prompting the creation of the epigraphic monument. Near the end of the valuable pillar’s writings, a Roman mile describes the distance to another road station which had been found two years earlier. 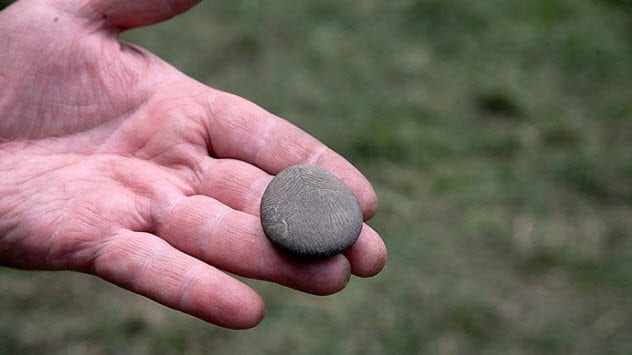 The road to a particularly unique discovery started with a barbecue. In 2015, the K’omoks First Nation gathered in the Comox Valley. While digging a roasting pit, they found ancient shells and realized that the shells signaled a site of historical importance.

Archaeologists moved in and confirmed that a large area contained more than just shells. One year later, archaeological students found something that stumped their more experienced elders.

Over 80 mysterious flat stones and tablets were unearthed between the bones, tools, and other remnants of a long-gone village. Each was inscribed on one side with symbols. Their identification is not ironclad, but each symbol appears to resemble a feather, tree, or fertility sign.

Cracking their exact meaning will prove to be difficult. The 2,000-year-old pebbles are the first of their kind, and some of the patterns aren’t very clear. 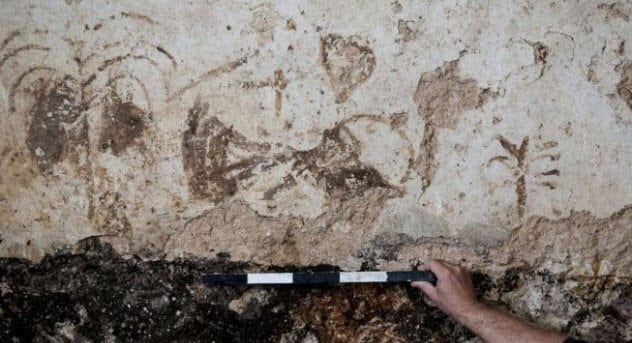 When a site in Jerusalem was earmarked to become a nursery, antiquity officials arrived to make sure that construction work wouldn’t destroy something of archaeological significance. Usually, after officials clear an area, building can begin.

However, archaeologists stopped construction in its tracks. The site, located in the Arnona district, turned out to be a mikvah (ancient Jewish ritual bath).

Remarkably, the room’s walls were decorated with symbols and script written in Aramaic—words that the experts are still unable to decipher. The pictures include palm trees, a boat, and what is most likely a menorah (a seven-branched candelabrum). The images and Hebrew script, which were etched in plaster and mud, are around 2,000 years old.

It’s unclear whether the marks had religious importance or were added by some graffiti artist. Either way, the finding is seen as one of the best such discoveries. It’s unique to have so many symbols and letters from the Second Temple period at a single location. 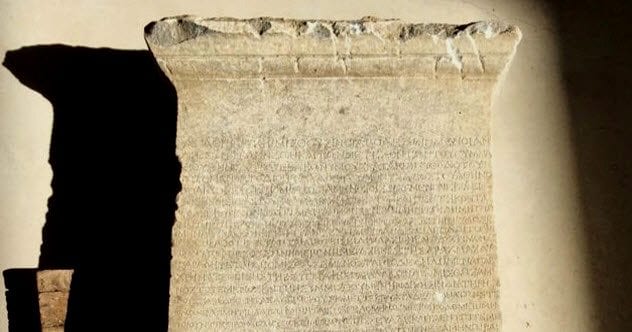 Excavations at Teos turned up nearly 400 ancient inscriptions. Dating back to antiquity, the Turkish city’s most intriguing etchings were found on a stela from the site’s Dionysus temple.

Once decoded, it turned out to be the most detailed rental agreement in the history of Anatolia. The 2,200-year-old contract describes how a group of young men inherited land from a donor.

Called Neos (gymnasium students aged 20–30), they rented out the property. The names of those who rented the area from them—as well as witnesses—were chiseled into the 1.5-meter-tall (5 ft) stela.

The Neos were strict landlords. Nearly half the stela details punishments for lodgers if they dodge rent, mismanage the land, or damage the buildings. Also included is the layout and contents of the gymnasium, the reference to a holy altar, and the Neos’ wish to use the land for three days each year.

Best of all is the discovery of two unknown legal terms. The artifact is the only such example from the ancient world and gives researchers a look at the laws and social dynamics during Hellenistic times. 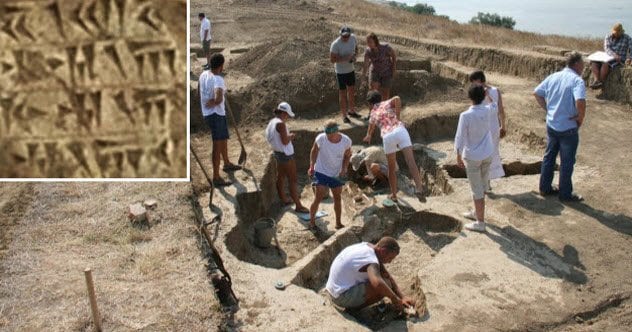 Founded in the sixth century BC, Phanagoria was a Greek colony. It became Great Bulgaria’s first capital, one of the largest Greek cities, and the cultural and economical center of the Black Sea territory. Today, its ruins sleep in the Krasnodar region of Russia.

In 2016, archaeologists found a broken stela (inset in image above) among several interesting finds. The stela was the only item with a foreign flavor. It was carved from marble (a material not native to the region), but the object’s age and inscriptions point to its original location.

Created in the first half of the fifth century BC, the ancient Persian script praises a king’s victory. He’s named as Darius I (550–486 BC). A previously unknown word identified the city of Miletus, a leader in the Greek resistance against Persia.

Darius I put that fire out in 494 BC, and archaeologists believe that the stela was erected in Miletus. At some point, it landed in Phanagoria, possibly as ship ballast. The discovery reveals new links between Phanagoria and the ancient Greek world during one of history’s most influential uprisings. 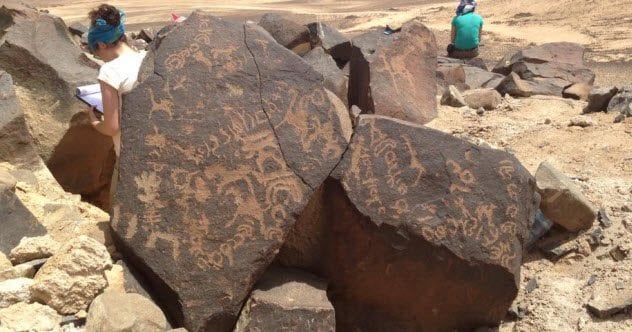 Jordan’s Black Desert was once a different color. If new petroglyphs are to be believed, it was green and abundantly populated with wildlife and people. Presently, the desertscape cannot support life and there is little water.

Recently, thousands of rock etchings, consisting of drawings and one-liners, have turned up in the Jebel Qurma region. Two thousand years ago, the people who lived there left behind a view of their experiences.

They wrote on rocks extensively, using an ancient alphabetic script called Safaitic. Some just left their names. Others voiced concerns over loved ones or starvation. One text, “I am on the lookout for the Nabataeans,” even hints at tension between the Jebel Qurma community and the people responsible for the remarkable city of Petra. 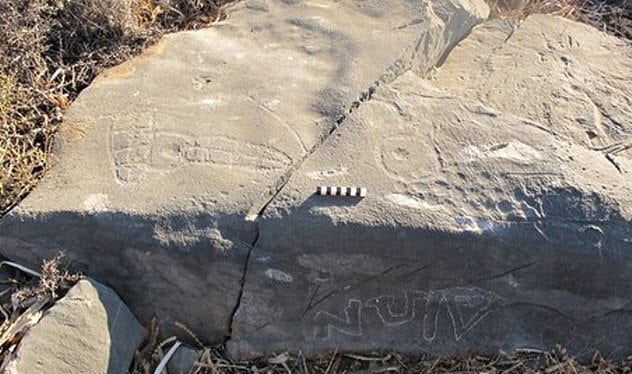 Although big phalli appear all over the ancient world, this art is rare because the artists recorded the sexual act itself in a very straightforward way. The graffiti was created between the fifth and sixth centuries BC and showed an incredible, if not unexpected, level of literacy.

One man, referring to his lover Timiona, skillfully inscribed a pronouncement about their relationship in large letters. The writer was obviously experienced in the art of writing. This shows that ordinary island people were well trained in the craft during archaic and classical Greece and not just philosophers and scholars. 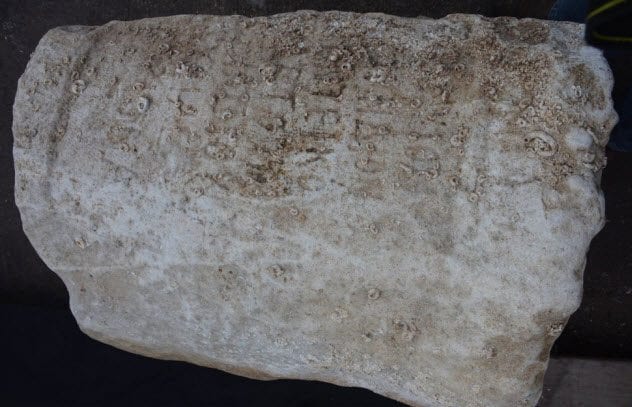 Although Gargilius Antiquus is not a new name to historians, it could never be determined which part of the Roman Empire fell under his command. Recently, underwater archaeologists were exploring Israel’s Mediterranean coast when they found a huge rock. The seven lines inscribed on its surface were the sort of thing that historians live for—a missing puzzle piece that makes the big picture clearer.

It described Antiquus as the Roman governor of Judea shortly before the Jewish revolt that occurred in AD 132–136. Not only did it give poor Antiquus his job back (in the history books) as the man who ruled Judea before the famous Bar Kochba uprising, but the artifact is only the second inscription found from the Roman era that names the territory.

A portion of the 1,900-year-old block is missing. Even so, it remains the longest inscription found off the coast of Israel. Weighing a hefty 600 kilograms (1,320 lb), it might once have been the base of a statue. 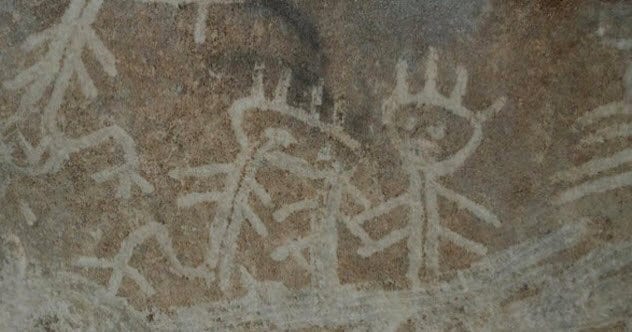 Christopher Columbus recorded the Caribbean island of Mona during his second voyage in 1494. The effect on the indigenous people would be as devastating as the rest of the places where Europeans arrived.

But old carvings show a different side to the new arrivals. Mona is home to immense, deep cave networks, and like many other cultures, the islanders used the walls as a canvas.

Newly discovered inscriptions show that the Europeans didn’t bring death and destruction (at first) but discussed religion and writing with the Caribbean folks. A study of Mona’s caves started in 2013 and found the richest collection of native iconography in the Caribbean.

Among thousands of images, researchers found something else left behind by the indigenous artists—phrases and names written in Spanish and Latin, dates, and symbols of Christianity dating back to the earliest colonial times. The unique cave environment changes the perception of how first contact went between the Old World and the New World. 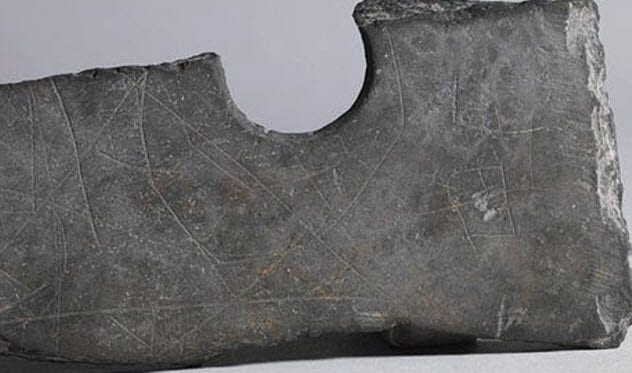 China is undoubtedly among the oldest of civilizations. In 2003, inscribed fragments pushed the country’s most ancient written language back by a groundbreaking 1,400 years.

The Neolithic shards were excavated at the Zhuangqiao site in Shanghai as pieces of stone, pottery, wood, jade, bone, and ivory. The 200 fragments were around 5,000 years old. That makes the inscriptions a close contemporary of the oldest writing in the world, which is thought to have come from Mesopotamia. However, the two systems originated independently of each other.

The inscriptions resemble Chinese words today. Each contains two to five lines that make up a character. What fascinates scholars is that they are strung together like a short sentence. This could be a hint that they are words and not symbols.

There is still a lot of division between researchers as to whether these are words, hieroglyphics, symbols, or something even more primitive. Whatever these golden oldies turn out to be, they are certain to shed more light on the roots of Chinese language.