Most people who live in the United States know that they probably don’t have the most dangerous animals around. Unlike Africa, Asia, South America, and Australia, there just aren’t that many large beasts that pose a danger to humans. Of course, there are some big critters to be concerned with, but most often, the smaller the animal, the deadlier its bite. The following critters may be lurking in your backyard even as you read this, so beware the deadly bite, sting, or mauling from these deadly beasts. 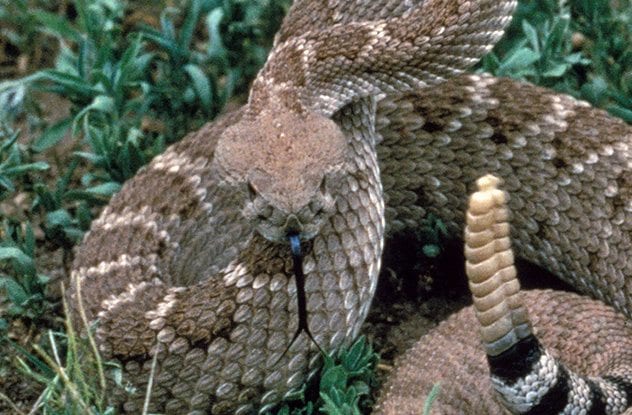 There aren’t a lot of snakes that prey on humans—rattlesnakes certainly don’t. These guys prefer to eat things they can swallow whole like small rodents, birds, lizards, and even other snakes. The problem arises when a person just happens to come a bit too close making them nervous, and they will stand their ground if they feel threatened.

Rattlesnake venom is a specific type of cytoxin that begins to digest the cells of the bite-victim to make swallowing prey just a bit easier. At the bite location, your skin and muscle cells break down and die. You’ve heard of flesh-eating bacteria? That’s pretty much what rattlesnake cytoxin does to your flesh. It’s nightmarish and can even result in amputation. Usually, a person can get away with a nasty disfigurement, but in extreme cases, the bite will kill you.

In the United States, people rarely die from a bite due to the prevalence of medical facilities stocked with anti-venom, but in places like Mexico, the western diamondback rattlesnake is responsible for the overall majority of snakebite fatalities. Of course, rattlesnakes are only a problem if you happen to live in northern Mexico and the southwestern United States—like around 20 million Mexicans and roughly 85 million Americans. 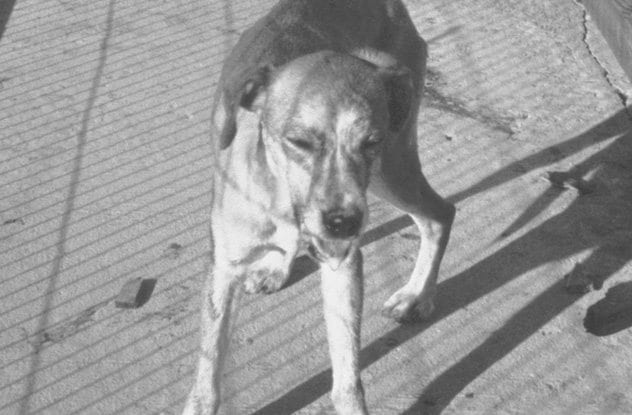 Not all deadly organisms are deadly all on their own. The rabies virus is one of the deadliest neurotropic viruses on the planet, and a bite from an infected carrier resulting in transmission is nearly 100-percent fatal if left untreated. In North America, it is most commonly found in wild animals like raccoons, bats, coyotes, rabbits, opossums, squirrels, skunks, wolves, foxes, cats, and dogs. Symptoms are not immediately present in many animals, so a bite from any of the above listed animals should be treated as a possible rabies transmission. For humans, this can be a painful and disturbingly inconvenient problem due to the nature of medical treatment for the virus.

To determine whether an animal is infected, you need to try and catch them so they can be analyzed. This is easier said than done with most critters, so preventative medical care is often required even without proof of transmission. Also, most people who get bitten by a rabbit don’t immediately go off chasing the little bugger through the woods unless they are Elmer Fudd. 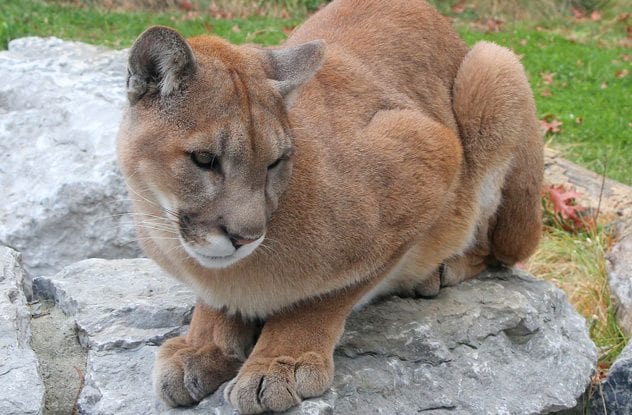 If you weren’t already aware, a mountain lion is the exact same animal as a puma, Florida panther, and cougar. They have different names depending on where they happen to live, which can range from all of South America through the western United States and into Canada. These impressive cats are not usually out stalking people, but when they do come across a lone hiker or someone just out for a stroll, they can be quite deadly. Since their target prey are deer and smaller mammals, they are out and about most often during dawn and dusk.

Mountain lions would rather eat prey they can more easily handle, so they don’t often attack humans, but when they do, it is almost always fatal (not for the cat). When they do attack people, they tend to go for children due to their size. When they take on a grown man or woman, your only real hope of surviving is to beat the bloody hell out of it. If it senses you’re more trouble than dispatching you is worth, they will back off. Also, remember that this is a cat, so if you happen to carry around a stick with a feather on the end or a wind-up mouse toy, you might be able to distract it. But don’t take our word for it—we don’t want to get sued. 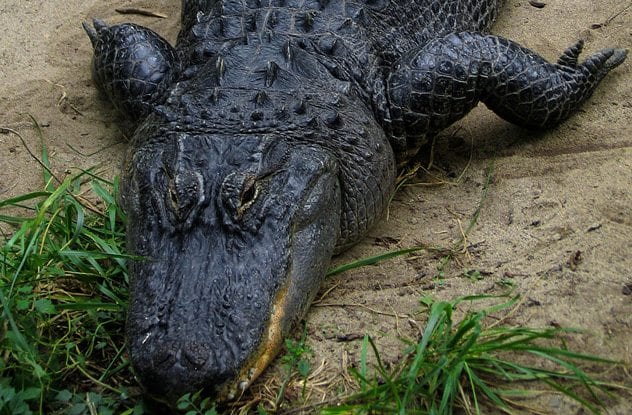 Folks who live in Florida, Mississippi, East Texas, and Louisiana know that just about every body of water is home to at least one of these beasts. Of course, they can be found almost everywhere since there are plenty of places for them to take a dip. Recently, a gigantic specimen was filmed strolling across a golf course, and you can bet it wasn’t just there to play the back nine.

They can even be found at the happiest place on Earth. Tragically, a two-year-old boy who was playing on a beach at Walt Disney World in Orlando, Florida, was attacked by a gator and dragged into the water. The boy did not survive, and the attack, though rare, is indicative of its most susceptible prey when it comes to humans—small children. 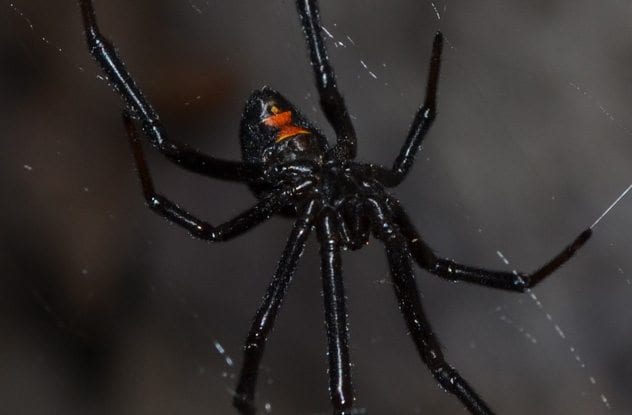 In truth, the black widow spider is not out to hurt humans. We are not their prey, given that we are thousands of times larger than they are. Of course, that doesn’t mean that a bite from one of these horrors won’t cause some serious damage.

The female of the species carries a venom 15 times more toxic than the prairie rattlesnake, making it the most venomous spider in North America. A black widow’s bite carries with it a latrotoxin, which has the nasty effect of inducing severe muscle pain and muscle spasms. Most people who are bitten by a black widow spider do not die but do live in fairly intense pain from the bite for up to a week. When children are bitten, they are much more susceptible to dying from the venom so they should be treated at a hospital immediately. 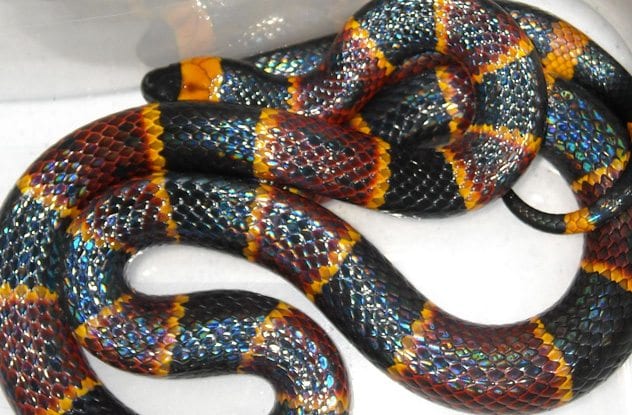 Have you ever heard the rhyme, “Red and yellow, kill a fellow; red and black, friend of Jack” and wondered what it was referring to? The fearsome creature that rhyme was written for is none other than the coral snake, which is one of the deadliest snakes in the world. Their venom is an extremely powerful neurotoxin that paralyzes the breathing muscles. Since you need those muscles to . . . you know, breathe, your chances of surviving without an anti-venom are pretty much nil.

You can find coral snakes pretty much anywhere in North America with two distinct types living in the eastern and western halves of the United States. All New World coral snakes are deadly and should be avoided like the plague, which is less deadly when you get right down to it. Like the rattlesnake, you can keep these out of your backyard by also limiting your rodent population, which, let’s face it, is probably in your best interest anyways. 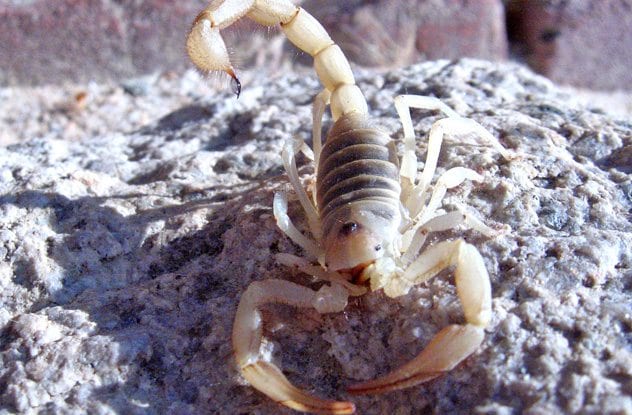 Sometimes referred to as your nightmare come to life, these nasty buggers can grow up to 5.5 inches long (14 centimeters), pack two lobster-like claws, and have a ferocious sting. In most people, a scorpion sting is not lethal. This is due to its venom being comparable to a honeybee sting, which is painful but rarely fatal. The problem with a scorpion sting is that many people who happen to be allergic to its venom don’t realize it—that is until they are stung by one. If a person has an allergy to these little guys, they will usually begin to have difficulty breathing, which can be fatal if left untreated.

They can be incredibly aggressive if disturbed and will sting you if they are given the opportunity. While most dangerous critters are given a wide berth by humans, people do keep these as pets, but even pet-owners know not to handle them. They have a nasty disposition and even without an allergy, they have a painful sting. They do look really cool, though. 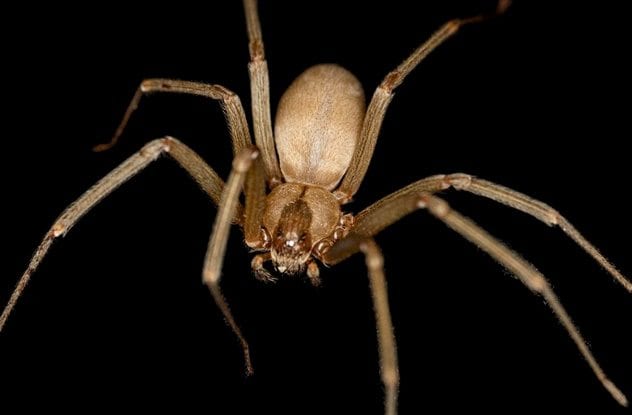 These nightmares share something in common with rattlesnakes because their venom does pretty much the same thing. The necrosis brought on by these evil arachnids can cause severe disfigurement, amputation, and even death, though this is rare. Most bites result in horribly disfiguring scars and damaged tissue can, and often does, become gangrenous.

They are especially dangerous to the young (children under seven) and the elderly, so be aware of any eight-legged monsters that happen to crawl into your home. And never forget that fire is their only weakness . . . and a heavy shoe. That works as well. 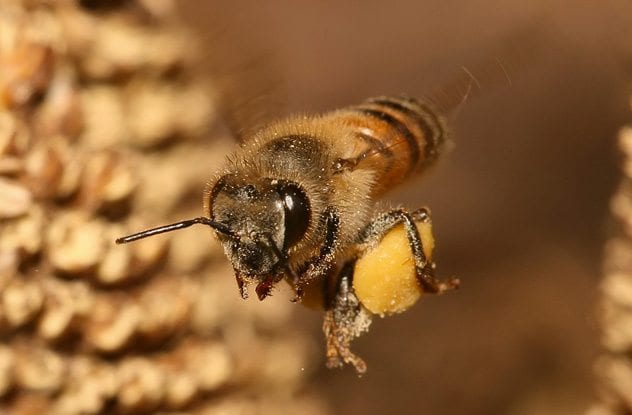 In the United States, the honey bee is classified as the deadliest non-human animal there is, resulting in an average of 100 deaths each year. A person with the allergy can die within 10 minutes of getting stung and will show signs such as swelling of the face, throat, and mouth, their pulse will become rapid, and their blood pressure will plummet. Fortunately, a shot from an epinephrine pen (an EpiPen) will save a person’s life, so people who know they have the allergy tend to carry them wherever they go.

The dangers from bees has only increased over the years due to the introduction of the Africanized honeybee in Mexico and the southern United States. These bees are far more aggressive than their European and American cousins, so they tend to swarm and sting far more often when disturbed by humans. 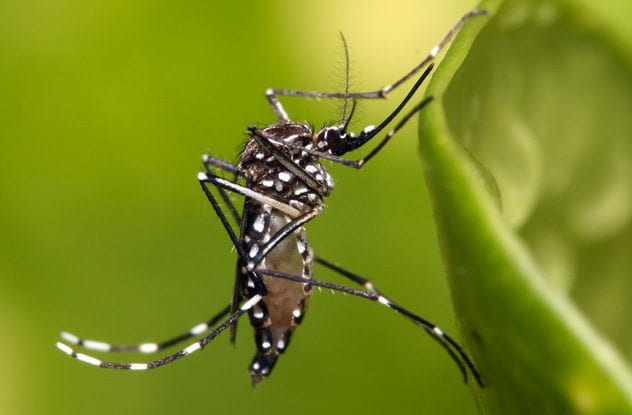 You wouldn’t think it to look at them, but the common mosquito is the deadliest animal on the planet. Mosquitos carry diseases like malaria, encephalitis, and the West Nile Virus, which the females of the species like to transmit to humans whenever they can. In developed nations like the United States, deaths from mosquito bites and transmitted diseases are rare, but throughout the world, they account for around one million deaths each year.

Recently in the United States and Mexico, the Zika virus has been spreading through mosquito bites. While Zika isn’t deadly to those it bites, if it infects a pregnant woman, the fetus can be affected in horrible ways. Just avoid mosquitos, kill them whenever you see them, and treat them like what they are: virus-carrying pests intent on sucking your blood and ruining your day.