It is arguably the greatest drama of all time. It is #peakTV at its finest. Breaking Bad will go down in history as one of the most influential shows of all time. Many people call the show perfect. In fact, Sir Anthony Hopkins, one of the greatest actors of all time, told Bryan Cranston “Your performance as Walter White was the best acting I have seen—ever.” High praise from a legend. But, what about the facts regarding the show we never hear about? Well, here are ten facts about Breaking Bad to die for. 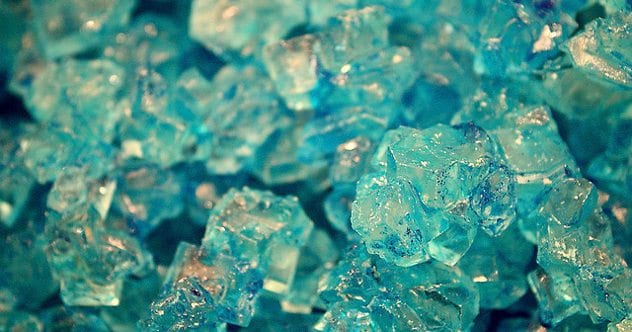 Ever since Breaking Bad‘s monumental success, actual meth dealers started adding blue dye to their crystal meth in an effort to increase sales. The idea was to “brand” their product. However, the effect was not quite the same as Heisenberg’s. In fact, the blue dye was doing nothing to increase the quality of the meth; it was actually making users sick. Leave it to a methamphetamine dealer to ruin the allure of crystal blue persuasion. The closest real meth dealers have come to beating Walter White was back in 2013, when a group of drug lords sold methamphetamine at a 99 percent purity rate. 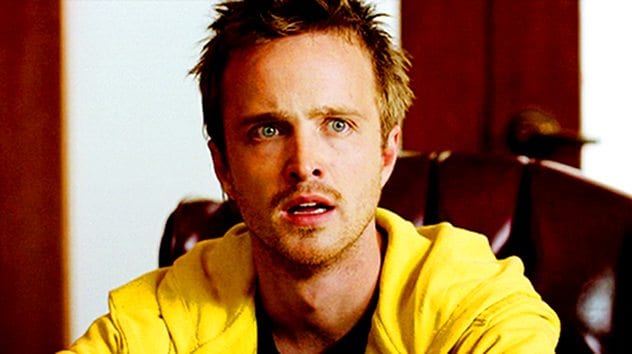 Many people have heard this rumor. The story goes that thanks to the 2007-2008 Writers Guild of America (WGA) strike, Jesse Pinkman’s life was saved. Originally, creator and show runner Vince Gilligan planned on having Aaron Paul’s popular character die at the end of episode nine of season one. But the WGA strike cut the season off at seven episodes, and by the time the second season rolled around, Gilligan had changed his mind, and Jessie was saved.

However, as the rumor spread, the story has become more of an urban legend. Vince Gilligan admitted in a panel that although it was their original plan to have Jesse Pinkman die in season one, the entire production staff knew by episode two, that Aaron Paul was too talented of an actor, and Jesse was too intricate to the plot, to send him to Belize. And so he lived, allowing the show to go on to have classic moments with Pinkman, like the death of Jane, the shooting of Gale, and of course, magnets bitch! Aaron Paul has also gone on to a successful movie and Hulu career.

8It All Started with The X-Files

Bryan Cranston in The X-Files – Drive

How did Vince Gilligan and Bryan Cranston meet? On the set of another show people call one of the greatest dramas of all time, The X-Files. In 1998, the second episode of the sixth season aired, called “Drive.” Vince Gilligan, the writer for the episode, cast Bryan Cranston in the role of the antagonist because he felt he would humanize the role. “We needed a guy who could be scary and kind of loathsome but at the same time had a deep, resounding humanity.” Sound familiar?

When Vince pitched the pilot of Breaking Bad to AMC, he already had Cranston in mind. Executives were unsure since they only knew Cranston from the family friendly sitcom Malcolm in the Middle, but after watching “Drive,” they were all on board. So let’s all thank David Duchovny for Breaking Bad’s tremendous success.

Walter White Throws a Party Pizza on the Roof

The shot heard around the world. In what has become one of the most famous scenes in Breaking Bad history, Walter White, hoping to resolve things with his wife, Skylar, brings over a pizza for a nice relaxing night with his family. Tip: When you sell meth behind your wife’s back, she is not always in the mood for pizza. When Skylar rejects the idea, Walt goes into a fit of rage, tossing the pizza out of its box onto the roof of his estranged home.

As Cranston filmed the scene, the crew assumed it would require several takes to get the pizza on the roof, or even some crafty editing. It turns out Cranston had the magic touch. On the very first take, Cranston was able to throw the pizza onto the roof, landing perfectly in place for an iconic shot. 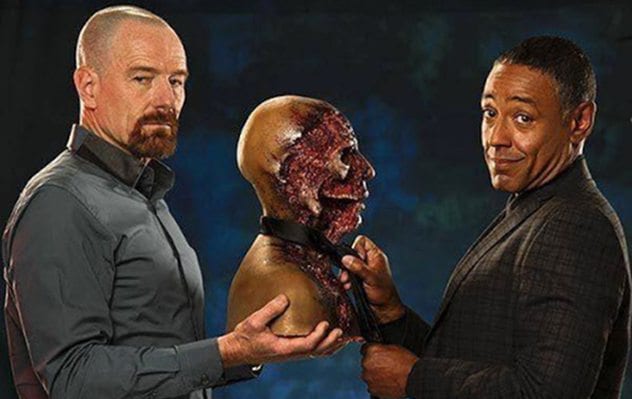 One of the most infamous scenes in Breaking Bad history is undoubtedly the death of Gustavo Fring. No one can forget when Walter White finally ousted the drug kingpin. In the iconic scene, the audience sees Gus slowly walk out to the hallway of the hospital, adjust his tie one last time, all while revealing half of his face had been blown to smithereens. It is an epic scene and a fitting way to end the battle between Gus & Walt that lasted nearly two full seasons.

But, did you know that the makeup artists who craft some of the most grotesque looks in television helped make Gus a two-face? The makeup crew from another AMC hit, The Walking Dead, stepped in to help create the powerful scene. Vince Gilligan told The New York Times that it took months to get this scene down pat, requiring top-notch makeup work, and a lot of special effects. Well, at least The Walking Dead did something right. The episode was appropriately titled, “Face Off.” 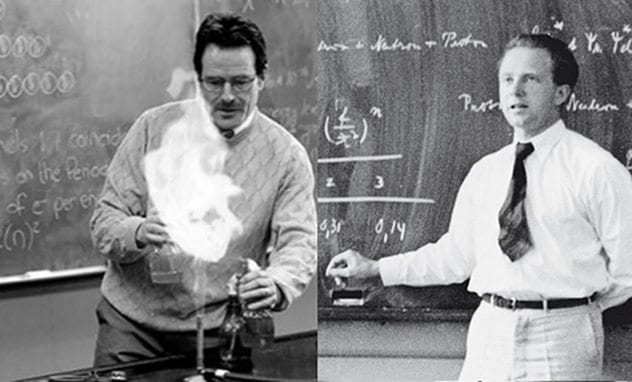 Once Walt officially breaks bad, he gives himself an alter ego, named “Heisenberg.” While it may not sound so badass, the meaning behind it makes complete sense. Walt got the name from Werner Heisenberg, who was a German theoretical physicist in the early 20th century. He is most notably known for being one of the key pioneers in quantum physics, for which he won a Nobel Prize in 1932.

Werner Heisenberg is also known for the Uncertainty Principle, which in layman’s terms means—we cannot know the present with enough precision in order to predict the future with certainty. Sounds pretty metaphorical to the overall premise of Breaking Bad, doesn’t it? If Werner came back to life today, he would be proud.

4Bryan Cranston Was Suspected of Murder

While on the Dan Le Batard Show with Stugotz on ESPN Radio, Cranston told a story where he was once a suspect in a murder case. Cranston, who worked multiple odd jobs before becoming an actor, served as a waiter in a Florida restaurant with his brother, also a waiter. The head chef, a man named Peter Wong, was apparently the worst person on the planet. “Everybody wanted to kill Peter Wong,” Cranston told Dan Le Batard in 2016.

Well, wouldn’t you know it, one day, Peter Wong turned up dead—murdered. Coincidentally, a few days prior, Cranston and his brother had decided to take a cross-country road trip on their motorcycles. Their disappearance prompted the Daytona Beach police to label them suspects in the murder. The police searched for the Cranstons, who were in the Carolinas by the time the murder came to surface. After telling the story, Cranston never said how he was proven innocent, or whether or not he actually killed Peter Wong . . . wait.

Before landing his role as Jesse Pinkman on Breaking Bad, Aaron Paul was a commercial mega-star. Well, he did a lot of commercials. After the success of Breaking Bad, Internet super-fans dug up some old YouTube videos that show Aaron Paul doing commercials in the 90s for Vanilla Coke, Juicy Fruit, Tombstone Pizza, and a fan favorite, Corn Pops. Yeah! Corn pops, bitch!

2Something Else We Can Thank Seinfeld For

Everyone knows about Tim Whatley, Bryan Cranston’s reoccurring character on Seinfeld—“hand me a schtickle of fluoride”—but what about everyone else?

Anna Gunn who played Skylar on Breaking Bad starred in Seinfeld for an episode as Jerry’s girlfriend, who he suspected of cheating on him with his horse-faced cousin Jeffrey. There was Bob Odenkirk, the infamous Saul Goodman, who went on a date with Elaine in one of the later seasons—and was forbidden to have sex with her until he passed his test to become a doctor.

It is not just the main characters either. Old Joe, the junkyard owner who housed Walt & Jesse’s RV, was on Seinfeld as faux Kramer for “The Pilot.” Even Milos, the terrible at tennis, tennis instructor, was the doctor who operated on Hank after he was shot. In fact, some believe Seinfeld is actually a prequel to Breaking Bad.

Here is a fun fact about television production. Usually once a season, the production crew selects an episode that will be filmed on a low budget, featuring fewer characters with dialogue, and usually only one or two settings through the entirety of the episode. It is a tough situation for writers and show-runners because they are very limited on what they can do as far as plot devices, moving a storyline forward, and keeping the audience engaged. These are typically referred to as “bottle episodes.”

Season three, episode ten, named “Fly” was that season of Breaking Bad‘s bottle episode. In typical Breaking Bad fashion, they blew it out of the park. “Fly” features mostly just Walt & Jesse camped up in their giant meth lab trying to track down a fly that is “contaminating” the lab, at least according to Walt. Jesse, who just wants to shut Walt up, eventually gives in, while also slipping something in his coffee that knocks Walt on his butt. As the episode progresses, Walt gets loopy, causing him to open up to Jesse, almost admitting to the biggest of all secrets between them—that he watched Jane die. It is a brilliant episode between two brilliant actors, really honing in on the father-son dynamic the two had throughout most of the series. The episode won an Emmy, proving how Gilligan & Co could make magic in any situation.

Up and coming freelancer looking to educate, insight, and entertain. Areas of expertise include sports, travel, TV, and fitness. Contact [email protected] for bookings.