Some people like to think there is a huge gap between humans and animals. Either humans are nobler than beasts, or animals are more innocent and pure. It turns out that humans are animals and all of our foibles can be found somewhere in the animal kingdom—including the desire to use drugs. Here are ten examples of animals that use chemicals for either pleasure or profit.

Alcohol fermentation is easy. Take some fruit and do nothing to it. A simple yeast contamination will metabolize the sugars inside the fruit, producing alcohol. It is probable that alcohol was one of mankind’s earliest drugs for this very reason. But it is not only humans that have come under the influence of the demon drink.

There is a common myth that elephants often get drunk on fermented fruit that has fallen on the ground, but in reality, they prefer fruit still on the tree. Deer, elk, monkeys, pigs, however, have all been spotted worse for wear after getting at alcoholic fruit. Birds have also been observed eating fermented berries. While these are mostly opportunists, eating whatever is available and not seeking out alcohol itself, there is evidence of this from an unexpected source.

Fruit flies are one of researchers’ favorite animal models. In 2012 scientists gave fruit flies access to two containers of fruit juice: one with alcohol and one without. They then observed which drink proved more popular. For male fruit flies that had mated recently, there was no preference for alcohol. But for males who had not had sex, alcohol proved a winner, as if they were drinking their loneliness away. . . 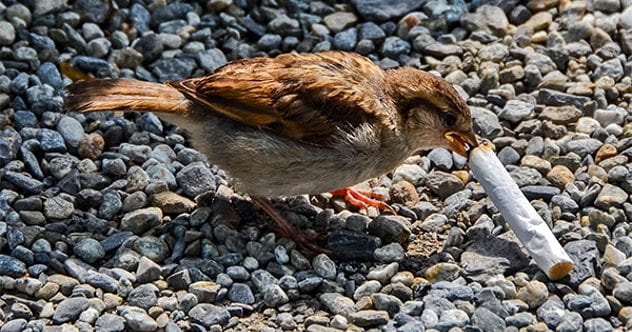 Discarded cigarette butts often litter the streets. They are an unsightly mess for us, but an opportunity for other animals. Birds have been seen in cities all over the world picking up the butts and weaving them into the structure of their nests. This led to scientists asking—why?

A study in 2012 found that birds’ nests with cigarette butts in them had lower levels of parasites. Cigarettes, as their addictive nature shows, contain nicotine. For both humans and birds, it is the nicotine content that makes them attractive, if not for the same reason. Nicotine is a potent poison to insects. By including the cigarette butts, they use the nicotine to drive out the parasites which can be deadly to young chicks.

There is a downside to their use, however. In nests that contain butts, the chicks are more likely to have chromosomal abnormalities. Cigarettes are bad for infants of all sorts it seems. 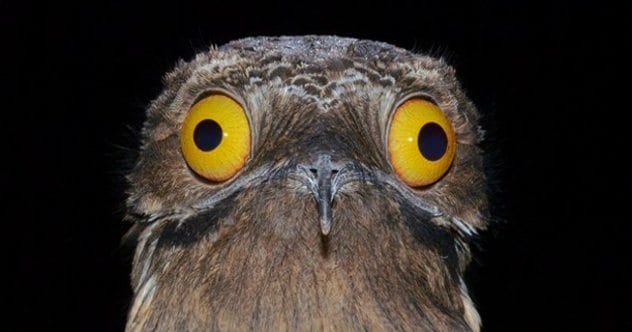 There is a behavior in birds that has stumped ornithologists for decades. A bird picks up an insect, usually an ant, in its beak and rubs it over its feathers. Called “anting” it is seen in many bird species.

One of the theories as to why a bird might do this is simply to make the ant palatable. Many ants can secrete noxious compounds to make them less appetizing to their predators. The formic acid some ants give off is removed by anting behavior and ends up smeared over the bird’s wings. The bird is then able to eat the ant without the bitter aftertaste. It may also be that the formic acid is used to deter parasites from living in their feathers. When offered ants that have had their formic acid sacs removed the birds skip the anting and simply eat the ant.

Another theory is that anting is addictive. After anting, some birds flap out their wings and open their beak before dancing around. Others lay on the ground with their wings spread out flat as if blissed out of their avian minds.

Dolphins purposely ‘getting high’ on pufferfish – Dolphins – Spy in the Pod: Episode 2 – BBC One

Dolphins are commonly thought of as the most intelligent of animals. Their behavior and social interactions make them seem almost human. And just like humans, it seems that teenage dolphins like to get high.

As can be seen in the video above, adolescent dolphins have been observed catching puffer fish and passing them around for others to enjoy. When dolphins catch other fish to eat, they are not very delicate, but with puffer fish, they will very gently toy with it in their mouth. Puffer fish have a defense beyond their spines—they contain a powerful neurotoxin. The dolphins are getting stoned on the puffer fish.

Once they have ingested the neurotoxin, the dolphins enter a trance-like state and hang motionless just below the surface of the water. 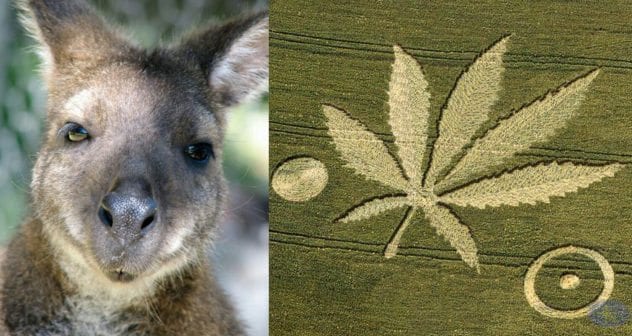 Opium poppies, the source of heroin, morphine, and other opioids, is a hugely profitable crop in Australia. Australia produces almost half the world’s supply of legally grown opium poppies. With this amount of narcotics hanging around it is no surprise that some become addicted. What might be surprising is that the addicts are not people—they are wallabies.

In Tasmania, Bennett’s wallabies have been found in the state-run opium fields getting heavily intoxicated. The wallabies crash into the fields and eat the poppies until they can no longer hop straight. Farmers come to their crops and find mysterious circles of bent over plants. These crop circles are not signs from aliens but the result of strung out wallabies looking for a place to crash.

It is not just wallabies either. There have been reports of sheep performing similarly daring raids on opium fields.

How catnip gets cats high

Not all drugs are effective on every species. Opium, cigarettes, and alcohol are all addictions humans can understand. For us, Catnip, Nepeta cataria, is a fairly dull and innocuous plant. For cats, however. . .

Cats under the influence of catnip will act like females in heat. Oddly, both sexes of cat will exhibit the same response. Cats will rub themselves on the plant, roll on the ground, meow loudly, and produce beards of saliva. They also develop the large pupils of a stoned teenager. After about ten minutes, they have had their fill of catnip and become desensitized to it for the next half hour. But they will readily come back for more.

Catnip contains a volatile oil, nepetalactone, which activates the hypothalamus and creates the high. The chemical works not only on domestic house cats but many large cats, like leopards and lynxes. Luckily for cats, catnip is a harmless drug they can return to again and again with no ill effect. Lucky cats.

Banisteriopsis caapi, also called Yage, is a common vine in the South American rainforest. It is one of the ingredients in the powerfully hallucinogenic drink used by shamans called Ayahuasca. It seems that human use of the drug was prompted by jaguars.

Jaguars will eat the leaves and roots of the vine. Once they do, they begin to roll around on the forest floor and toy with items like a kitten would. For tribes in the Amazon, the jaguar was held to be sacred. Seeing the jaguar behave in this bizarre way may have given them the idea to try this magical vine for themselves. Ayahuasca is still commonly used in rites of passage and rituals but has become popular with Western travelers looking for a touch of jaguar fun.

Jaguars may have a non-narcotic reason for chewing the Yage vine. It can cause vomiting and diarrhea which rids the body of worm infections. 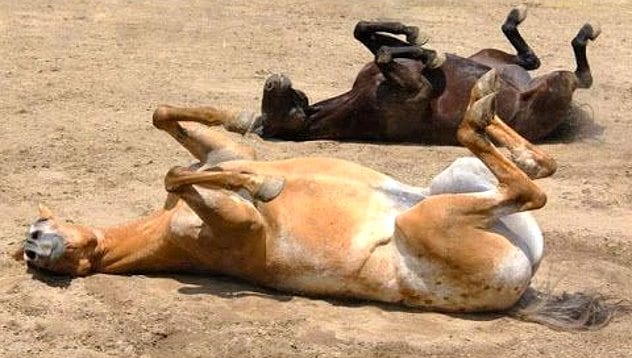 Locoweed, also known as Crazy Weed, is unsurprisingly a plant which causes odd behavior in animals. Locoweed is actually a group of plants which all cause similar effects—Locoism. When an animal gets Locoism, they wander aimlessly, show extreme lethargy, and salivate excessively. None of the effects of Locoism seem that pleasant, but it is apparently an addictive experience for horses. They just go crazy for Crazy Weed.

Horses will seek out Locoweed because it is a very nutritious plant. Once they have tried it, however, they will continue to eat it. Just two weeks of eating Locoweed can cause depression, but the serious physical effects take longer. They begin to suffer weight loss, impaired movement, and loss of balance.

Horses are not the only animals which react poorly to Locoweed. Sheep and cattle are also at risk. Farmers in the United States are being educated on how to avoid their animals succumbing to Locoism.

Ask someone to draw a mushroom and chances are they will draw one with a red cap and white spots. This is the Fly Agaric mushroom, Amanita muscaria. Common throughout Europe and Asia, it is toxic to humans. A dose of 15 caps can be deadly. This has not stopped people eating them because they also contain a psychoactive drug called muscimol.

Humans are not the only ones who like these fungi, though. For reindeer, they are a vital part of their diet. They also get enjoyment out of eating them. Eating the Fly Agaric makes the reindeer loll about, behave erratically, and bellow strange noises. Importantly for the reindeer, they are not poisoned by the mushrooms.

This is also important for shamans who would like to use the fungi in their rituals without dying. When reindeer eat the mushrooms, they metabolize the poisons but excrete the hallucinogens in their urine. For a safer Fly Agaric trip, you simply have to quaff it down in its warm, yellow form.

Lemurs get high | Spy in the Wild – BBC

The Black Lemurs of Madagascar use millipedes for protection against insects. They catch the large creepy crawlies and bite them. The poor millipede unleashes its chemical defenses which include all manner of offensive smelling compounds. This is exactly what the lemur wants, however, as it smears them all over its coat as a way to drive off insects and other parasites. That is one use of the millipede. A lemur that uses a millipede as an insect repellent also seems to get high from the experience. It drools, rocks back and forth, and rubs itself.

Interestingly, it is not only in Madagascar that primates have found millipedes to be handy pieces of medicinal kit. In Venezuela, Capuchin monkeys similarly rub themselves down with the secretions of a millipede. Here there is no evidence of the monkeys getting high, though. The millipedes produce a pair of insect repellents that are very effective at driving away bot flies which like to lay their larvae in other animals’ flesh. If there are not enough millipedes to go around, then capuchins will rub themselves up against those members of their tribe which have been able to smear themselves in millipede goo. Millipedes are a hell of a party drug.