The lowly sock. We don’t often think of it as a pivotal part of our daily attire. But when socks matter, they really matter. Whether as mechanical prevention for debilitating injuries like blisters or frostbite or as an indicator of social and economic status, socks carry more importance than just the weight of our bodies upon their soles.

Soldiers, athletes, and monarchs have all walked into history wearing socks, and occasionally, the socks themselves helped make history. Read on to learn of 10 instances when socks shaped world history.

10 The First Socks Were Worn With Sandals 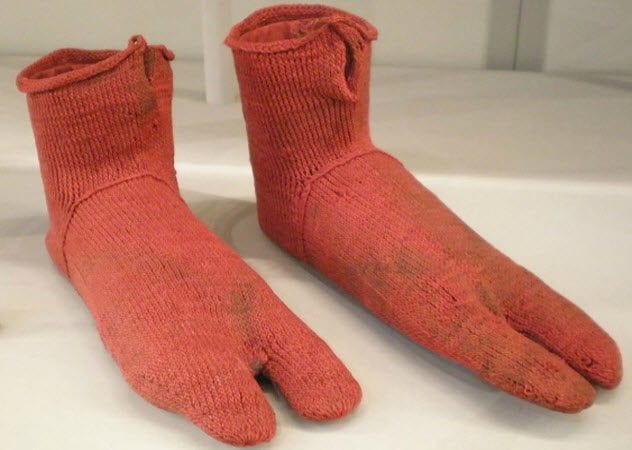 Today’s classic fashion faux pas was actually the first method of wearing this clothing item. The earliest-known knit socks are from Egypt, dating back to the 3rd–6th centuries AD.

Most of sock history occurred in colder climates, so why there were socks in ancient Egypt is a mystery. These were constructed of knitted wool, often in bright colors, with a division between the first two toes to allow for use with sandals. Basically, they were the first fashion socks because they were probably not needed for warmth.

The Romans also wore socks with their sandals. Bare-toed Roman soldiers suffered in damp northern climates like Britain, and archaeological evidence (the Vindolanda tablets) shows they would write home to request more socks be sent.

How do we know they wore them with sandals? A dig in Britain turned up a sandal with fabric fibers caught on pieces of metal inside the shoe. So, yes, this world-conquering empire expanded at the hands of armed warriors on the frontiers who wore sandals with socks. 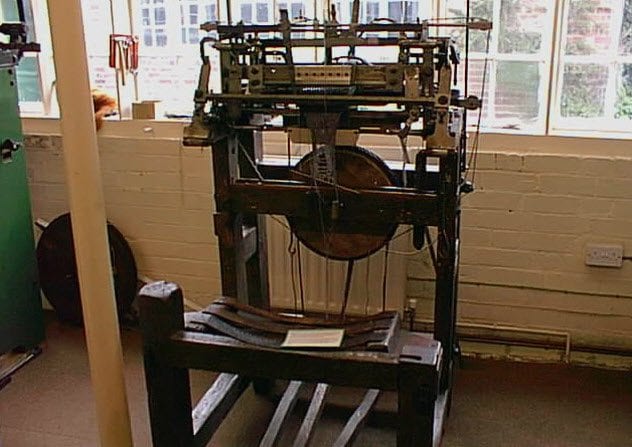 The queen of England was known to enjoy high-quality silk stockings. At the time, all stockings, hose, and socks were handmade and understandably expensive.

In 1589, a man named William Lee approached her for a patent on a new automated knitting loom for stockings. The stocking he presented as an example failed to impress Elizabeth, who thought them shapeless and rough. She turned him away, citing fear that the machine would take jobs away from her subjects.

King Henry IV of France had no such qualms and offered Lee financial support. Lee eventually moved to Rouen where he built a stocking frame factory, which became the first major step toward the mechanization of the textile industry. 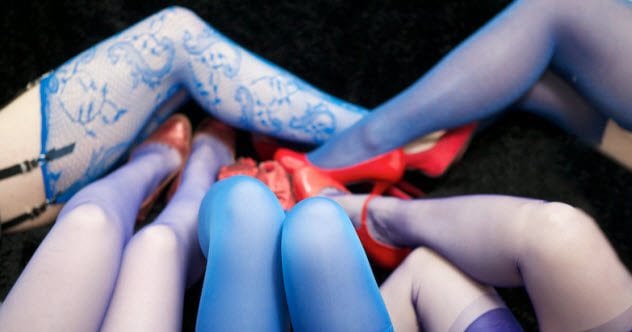 The original blue stockings were inferior socks made of undyed, grayish, worsted yarn and worn as common everyday socks. They received a famous promotion in 1756 when Benjamin Stillingfleet received a message from educated salon-hostess Elizabeth Vesey.

“Don’t mind dress! Come in your blue stockings,” she replied to his declined invitation to attend her events on the basis of not owning fine enough clothing. “Bluestockings” was quickly adopted to describe the new society of intellectuals who stood less upon formality and gender roles and more upon the sharing of ideas.

Two centuries earlier, mention is made of Mary, Queen of Scots, wearing blue stockings to her execution. Perhaps this was in defiance of the known preference for white silk stockings by Elizabeth I, who had signed Mary’s death warrant.

At the time, blue stockings were in vogue in France, where Mary had spent her childhood. Mary’s execution stockings were light sky blue, embroidered with silver thread, and held up by green garters.

7 The Original Luddites Were Sock Knitters 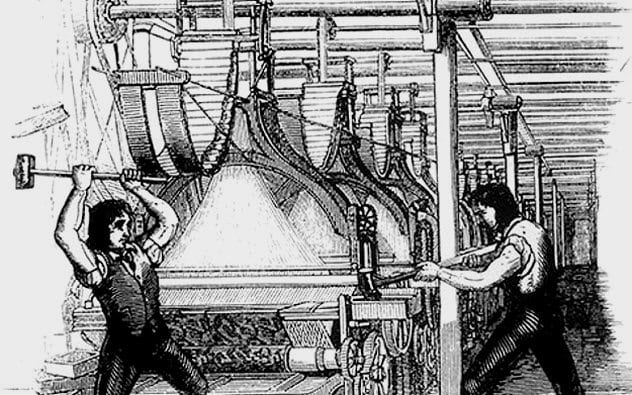 Imagine spending your apprenticeship and working career perfecting the fine art of sock knitting. Now imagine some guy named William Lee goes and invents a machine to steal your job.

The initial Luddites were simply afraid of losing their paychecks. The story goes that a young sock-knitting apprentice named Ned Ludd smashed two stocking frame machines in 1779 and became a poster boy for the movement.

Textile workers began destroying equipment and burning factories all over Britain. In 1811, they began to organize—meeting at night and practicing drills. They clashed with the British military on several occasions.

By 1861, Parliament had made their brand of mischief a capital crime. Today, the term “Luddite” is used in reference to anyone who is opposed to technology and progress on the grounds that it is bad for the economy and society.

6 Sammy Sosa Got His Start With A Sock 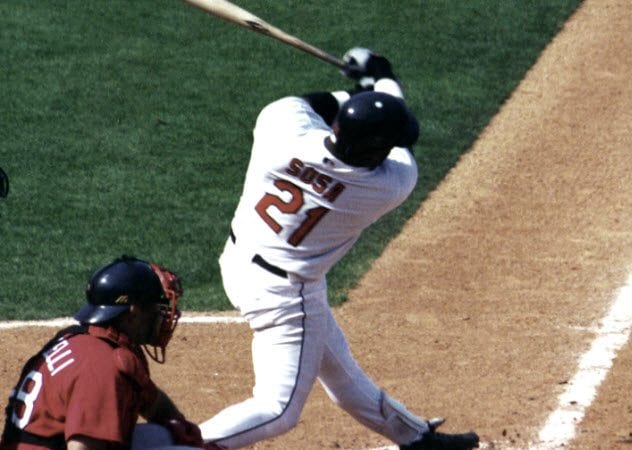 Samuel Sosa Peralta had a poverty-stricken childhood in the Dominican Republic. After his father died when Sammy was seven, he helped support the family with odd jobs. His first brush with baseball came at 14 years old with a glove made of a milk carton, a branch for a bat, and a ball made of balled-up socks covered in tape.

The Texas Rangers signed him at 17, and he went on to play for the Chicago White Sox, the Chicago Cubs, and the Baltimore Orioles. Although his career was littered with controversies, Sammy still broke several world records for home runs and joined Babe Ruth in the standing of hitting over 50 homers in three separate seasons. 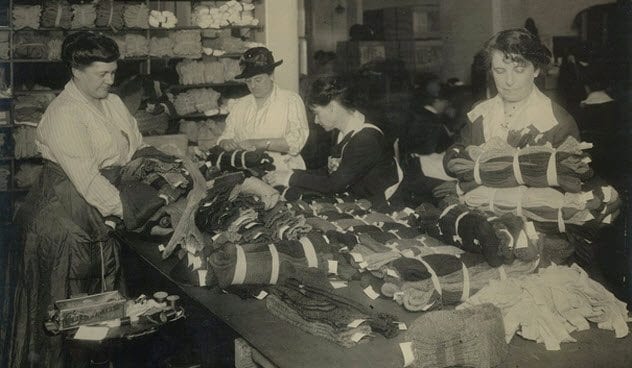 In 1777 during the American Revolutionary War, the American army’s feet were in very rough shape. It was getting colder and colder, food was scarce, and most soldiers’ feet were bloody from the lack of socks and shoes.

General George Washington wrote to Congress repeatedly through the fall and winter, pleading for supplies and specifically mentioning socks each time. Upon receiving a description of the soldiers’ feet from her husband, Rhoda Farrand of Parsippany, New Jersey, organized a group of women to knit hundreds of warm wool socks.

Then she traveled with her son to deliver the socks to the troops gathered at Morristown. The years 1777–78 are considered the turning point of the war in favor of the American rebels.

World War I and II soldiers were also laid low by their feet. Trench foot accounted for up to 40 percent of casualties in some engagements, often causing permanent damage. Trench foot is necrosis of foot tissue caused by long-term exposure to excess moisture. This is easily prevented by frequent changes of socks to keep feet dry.

The problem in World War I was supply. The US textile industry couldn’t keep up, and volunteers across the country knit socks for soldiers by the thousands. The supply of socks was fine in World War II. But the problem continued to plague the ranks in lower numbers as soldiers were reluctant to take the time to care for their feet. Eventually, improvements in waterproof boot technology largely solved the problem. 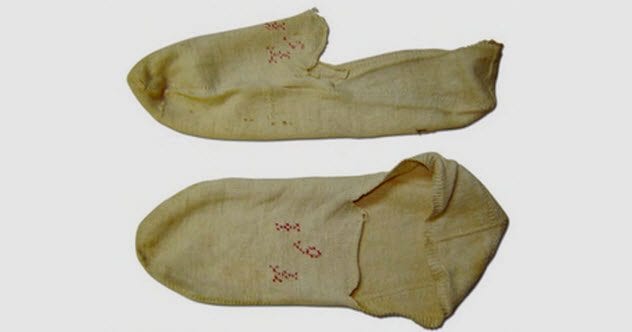 This founding father was plagued by infirmities. Severe osteoarthritis, headaches, and bouts of diarrhea kept Thomas Jefferson in bed for days. He hated the cold and suffered more severely in colder temperatures.

So he had his slaves make him socks. Very nice socks, embroidered with his initials and a number, theoretically to keep track of them. As the socks wore out, he had them opened up and sewn inside his waistcoats for extra insulation. A French ambassador once penned a complaint that Jefferson had greeted him at the White House wearing a casual frock coat and stocking feet.

Ironically, Jefferson spoke of himself as a hale and hearty individual. At age 75, he boasted that he had only lost one eyetooth (a claim that is probably not true due to his jaw pain recorded in 1808).

He also said that he rode his horse 10–13 kilometers (6–8 mi) per day. Finally, Jefferson claimed that his ability to ward off colds was due to bathing his feet in cold water every day—at which point, we assume he put on his socks. 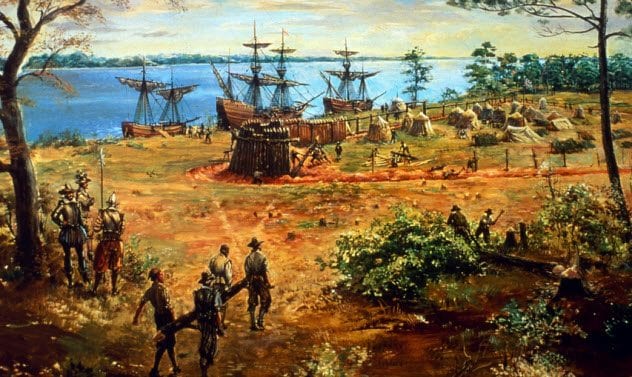 The Virginia Company advised using the following list of clothing for men headed out to found the Jamestown Colony: one knit hat, three shirts, three lightweight suits, one waistcoat, three falling bands, one pair of garters, four pairs of shoes, and three pairs of silk stockings.

Arriving in 1607 to a much colder climate than expected, these men lost most of their population over the winter of 1609–1610. They were on the verge of abandoning the settlement when ships with fresh supplies and more colonists arrived.

A broadsheet published in England in 1622 was titled The Inconvenients that have happened to Some Persons which Have transported Themselves from England to Virginia without Provisions Necessary to Sustain Themselves. It went on to say: Take warmer clothes. By the 1630s, each arriving settler brought four warm woolen stockings as part of a much warmer wardrobe. 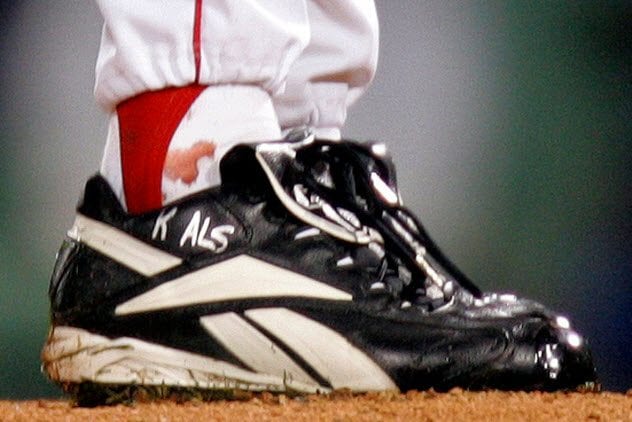 Curt Schilling pitched for the Boston Red Sox from 2004–07. (He sat out the 2008 season due to a shoulder injury.) But it was a tendon injury that got the most attention.

Schilling helped the Red Sox win their first World Series in 86 years with a recurring ankle injury. A tendon injury occurred in Game 1 of the American League Championship Series. As a result, he pitched his worst game of the season.

For Game 6 of the 2004 American League Championship Series against the New York Yankees, a quick surgery temporarily tacked the offending tendon in place for seven innings. Even so, the surgical wound seeped blood through his sock the entire game and caught the attention of the national media.

Afterward, conspiracy theories abounded as to whether the blood seen on the sock was real. In 2014, Schilling posted a graphic photo online of his ankle that had been taken the day of the game to put rumors to rest. In 2013, the sock from Game 6 sold at auction for $92,613 to an anonymous bidder. 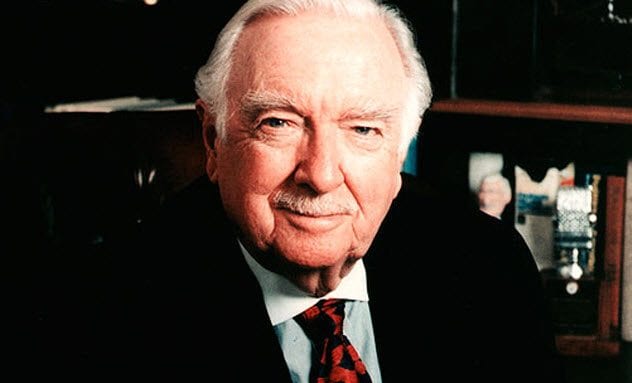 President Richard Nixon was the first US president to visit China since the formation of the People’s Republic of China. The move changed the balance of Cold War politics and economics in massive ways and sent fresh images of China back to the US for the first time in 25 years.

The newscasters who went with the president had an awful time. Neither the totalitarian government of China nor Nixon himself would give them anything newsworthy to work with. All the tours were carefully staged and bland.

The wooden toilet seats at the hotel were recently relacquered and still quite sticky, literally removing skin when sat upon. And Walter Cronkite’s socks kept shocking him. Yes, Cronkite had electric socks that were supposed to keep his feet warm, but they were malfunctioning and kept shocking him at unexpected moments.

10 Patriots And Heroes Who Stepped Up During Terrorist Attacks