The squiggly, microscopic tadpoles that helped conceive us all don’t get a lot of thought. They swim around the uterus looking for an egg to fertilize. Guys can produce anywhere from 20 to 100 million of the little buggers, and they produce about 1,500 a second. Scientists have even made sperm in the lab from stem cells and used it to impregnate mice.

There is amazing research going on in the fields of reproduction and fertility, but it turns out that not all sperm is created equal. A huge variety of these little reproductive missiles exists in nature. Some are capable of amazing feats, and others are just plain weird. 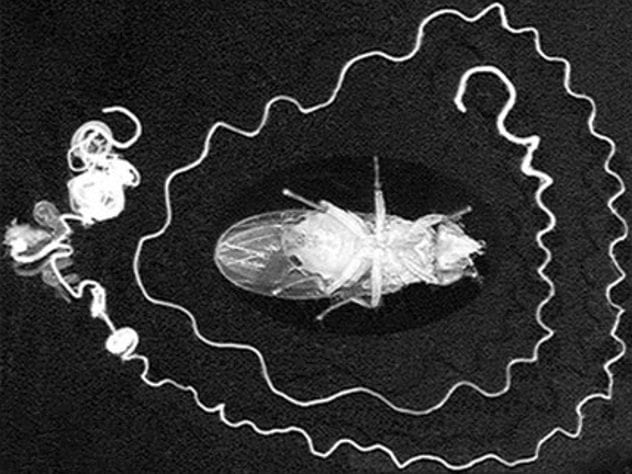 At 50 micrometers, sperm cells are kind of small. You can’t see the individual cells. It seems that the larger the animal, the smaller the sperm. Whale sperm clocks in at 30 micrometers. The reverse also holds true. The largest mammal gametes comes from the thumb-sized honey possum, at 350 micrometers, visible with a magnifying lens. That still isn’t even close to the record holder, however.

Drosophila bifurca is a fruit fly which only produces a few reproductive cells, but they’re whoppers. At 6 centimeters (2.4 in), its sperm is 20 times longer than its own body. How is that even possible? Well, the tail is coiled up tight. The next obvious question would be, “Why is a super-long sperm even necessary?” Apparently, the females have very long reproductive tracts. This quote says it best: “Female bodies of many species are not passive arenas within which sperm compete, but more like obstacle courses, with hurdles and defenses in place to weed out weakling sperm.” 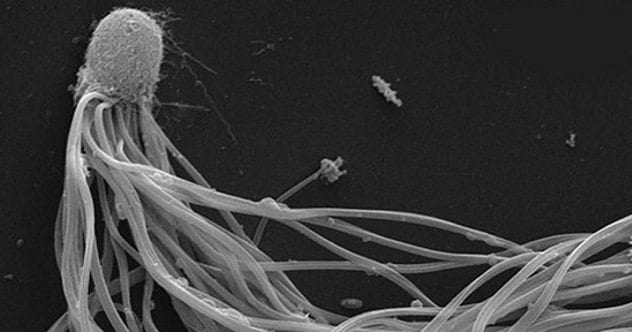 Ant queens of the desert species Cataglyphis savignyi can live for 20 years, which is a long time for a bug. They mate with lots of guys when they’re young and store their spermatozoon deposits in a special organ called a spermathecal. If you’re the male, you want to make sure your spermatozoa make it to the queen’s storage pouch first, as there is only so much room before the tank is full. Facing a reproductive tract full of competing sperm, these ants have evolved an interesting tactic. Their gametes group up into bundles and swim together.

Bundles of 50 to 90 spermatozoa glue their heads together with sticky proteins and swim together. As a group, they move 51 percent faster than solo swimmers. It’s like a sperm version of Voltron. This cooperation helps to ensure that as much of a male’s DNA a possible gets into the next generation. Once they reach the spermathecal, the sperm break apart and set up shop for the next 20 years or until they are needed to fertilize eggs.

While working together is quite an amazing feat, mice sperm take it a few steps further. First, while most mammal sperm have the typical teardrop-shaped head to make them more hyrdodynamic, mice have strange, scythe-shaped spermatozoa. It turns out that these oddly shaped heads are designed to help the cells hook up together into sperm trains. They essentially just hook onto their fellow sperm anywhere they can.

Like with the ants, this helps them swim faster . . . usually. Researchers working with North American deer mice showed that while groups of sperm can grow to up to 35, the optimal train size is seven, in which they tend to move fastest. If the group grows any larger than this, their movements start to interfere with the rest of their team, slowing them down. The most amazing find was that in general, deer mouse sperm tend to group into trains of six or seven. Somehow, they can count. Science has yet to figure out how they do this. 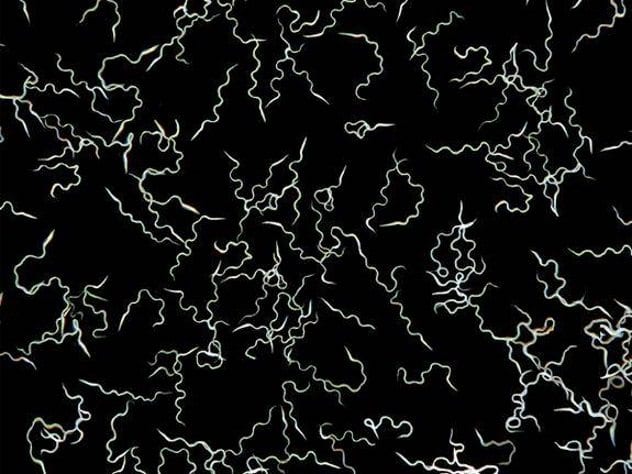 How do sperm know where to go? Do they just swim around at random? Not mosquito sperm. They follow their nose . . . sort of. Scientists have found some odd molecules in Anopheles gambiae males that are normally associated with the female’s sense of smell. Only female mosquitoes sniff out blood, which they need for their eggs. They do this with odorant receptors in their antennae. When similar receptors were found in the sperm of male mosquitoes, it raised the question, does mosquito sperm have a sense of smell?

It turns out that these odorant receptors are built into the tail of the spermatozoa, and when certain chemicals were present, they’d start swimming excitedly. It is believed that the receptors essentially signal the sperm to mobilize when the time is right for fertilization. Researchers have since found that other insects, like fruit flies and wasps, have similar mechanisms built into their sperm. 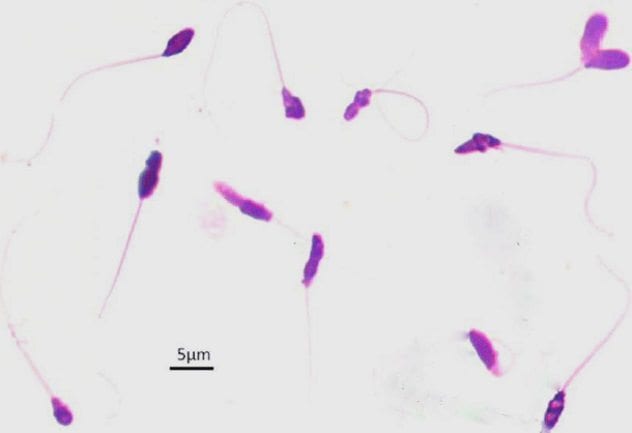 Naked mole rats are odd creatures. They live underground in low levels of oxygen, they’re nearly immune to cancer, and they don’t feel pain. They also live like ants or bees, with one queen that is the only one to reproduce. The head female chooses her mate, and it is because of this lack of competition that naked mole rat sperm may be the most defective, laziest, ugliest sperm in all of the animal kingdom. When there is a lot of competition for reproduction within a species, the guys with the best sperm get a leg up on their rivals, but there are no rivalries in the world of naked mole rats. Because of this, their sperm doesn’t have to be very good at all.

Researchers found that most naked mole rat sperm can’t even move. “Only 7 per cent of the sperm actually moved, and they swam at around 35 micrometres per second—possibly the slowest sperm of any mammal.” On top of that, there are lots of abnormalities among the sperm. Some of their heads are squashed, some are lumpy, some are shrunken, and others have multiple heads. It’s a horror show down there. 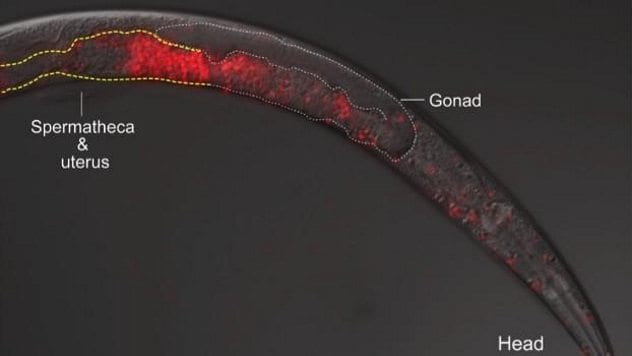 Nematodes (a kind of microscopic worm) of the species Caenorhabditis nigoni aren’t real picky about who they sleep with. They’ll mate with a related species, Caenorhabditis briggsae, if given the chance. Usually, when different species mate, it’s no big deal. Either nothing happens, or the offspring of the union is sterile, like a mule, which is a cross between a horse and a donkey. But when a male C. nigoni gets it on with a C. briggsae (which are all hermaphrodites), the result is probably severe injury, if not outright death.

Researchers studying the mating of these worms found the sperm of C. nigoni tearing up the insides of C. briggsae. The sperm had destroyed the ovaries and then tore through the body, destroying tissue. They even made it as far as the head. The reason for this is that the spermatozoa of C. nigoni are much more competitive. They’re used to having to get a little rough in the reproductive tract to get things done. They’re like an angry sperm mob. When they show up in the milder neighborhood of C. briggsae, they start trashing the place. This is the first time that sperm has ever been shown to kill another species. 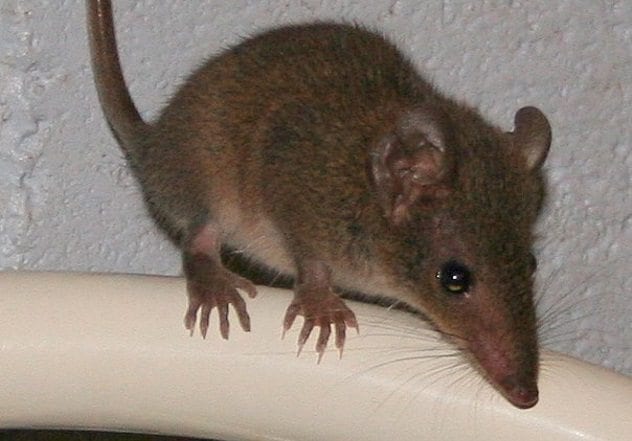 Males compete for females in lots of different ways. Fighting and elaborate displays can be found all throughout the animal kingdom, and they take lots of resources. However, in Antechinus, a genus of mouse-sized marsupials, the males don’t compete among themselves, at least not directly. They let their sperm fight for them. On top of that, male Antechinus sacrifice literally everything for their sperm.

Once a year, during mating season, Antechinus males will mate nonstop until they fall over and die. Each mating can last from between 12 to 14 hours, and they do it again and again until their bodies start to fall apart, to the point of fur loss and gangrene. After a few weeks of this, the males are dead. They do it so that they can produce the best sperm possible and get it into as many of the ladies as they can.

And since the females take on multiple suitors, it is the sperm duking it out inside them that decides which males ultimately sire offspring. Studies confirm that indeed, the Antechinus with the best sperm has the most kids. This small creature lives only to get its spermatozoa into the ring to fight for reproductive rights. No mammal puts so much importance on its sperm as Antechinus. 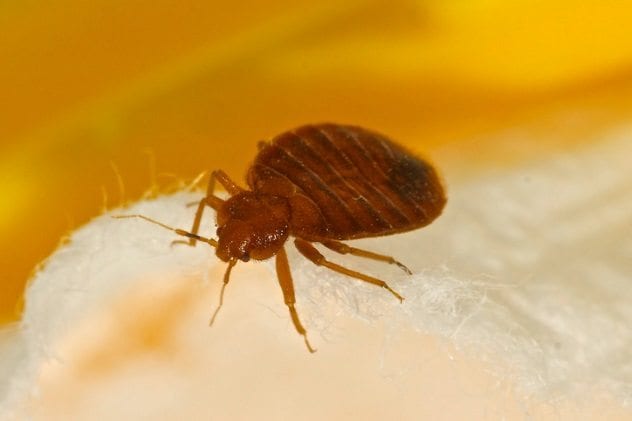 Bedbugs have one of the weirdest and most horrific sex lives of any creature. When the females come out to feed, the males jump on them and stab into their abdomens with their sharp penises. They don’t aim for the vagina; they just stab them. The females have even evolved an abdominal structure to guide stabbing penises into a mass of germ-fighting cells. This helps prevent infection from the wound or from the male’s dirty penis. No matter what, the female is going to get stabbed somewhere. The best she can do is try to ensure that she doesn’t die from the wound. And if she encounters too many horny guys, she may get stabbed to death.

But perhaps the most amazing feat of all is that the sperm now are swimming through the female’s bloodstream. They have to somehow navigate her cardiovascular system and then “drill into the reproductive tract to fertilize the eggs.” For our sperm, it’s a pretty straight shot from vagina to the uterus and then to the fallopian tube. Bedbug sperm has to weave its way through the female’s body and then burrow through the walls of her organs to get to where it needs to be. That’s some determined sperm. 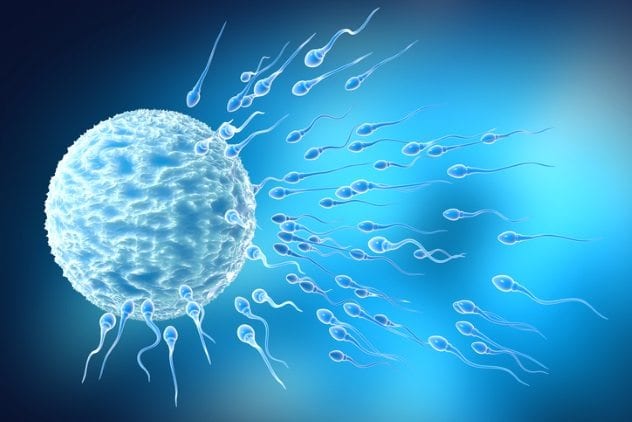 In mammals, there are two types ovulation: induced and spontaneous. Spontaneous ovulators, including humans, release eggs on a regular cycle. Induced ovulators only release eggs in response to sex. Research to find the trigger behind induced ovulation has found that there is a protein called the “ovulation-inducing factor” in the semen, which triggers this response. Once this protein makes it into the female, it travels to the hypothalamus and pituitary gland, ultimately causing the structures to release hormones that trigger ovulation.

As it turns out, this ovulation-inducing factor has been found in every mammal tested thus far, including humans. Most interestingly, it has been observed to induce ovulation in cows, which are spontaneous ovulators like us. So if this protein is in human semen, and it’s been shown to release eggs in spontaneous ovulators like us, then this might have huge implications for human reproduction. 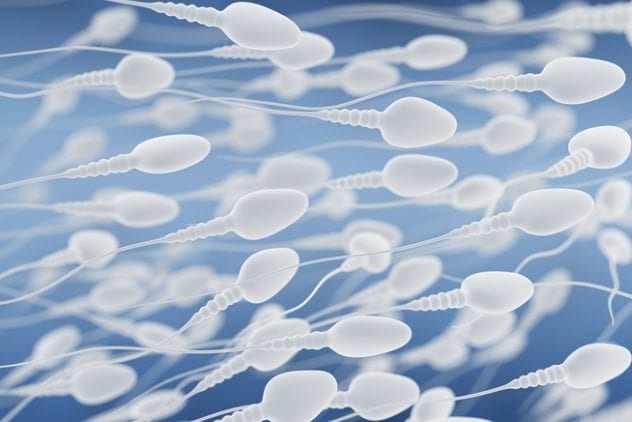 A female fruit fly might mate with several males, but in some instances, she doesn’t seem to be interested in any other guys. The reason is that a male’s sperm can actually change her behavior. Studies show that sperm and the seminal fluids that go along with it can have dramatic effects on females. It can cause female fruit flies to eat more, to lay more eggs, and (possibly most importantly) to become less interested in other males.

Since the proteins that cause these changes are often present in mammalian seminal fluids, sperm might have the same effect on humans. In fact, there is already research that shows that women who have sex without condoms experience less depression than those who do. Note that only three percent of semen is sperm. The rest is water and several other compounds, proteins, and hormones. In particular, semen contains “many mood-elevating compounds: endorphins, estrone, prolactin, oxytocin, thyrotrpin-releasing hormone, and serotonin.” A large part of a man’s ejaculate seems to be a cocktail of mood-altering drugs.

Monte L. Richard II is a writer and game designer.