For hundreds of years in Europe, all of the great works of art produced were in service of the Christian faith. Patrons were either rich nobles looking to boost their faithful credentials or the Church itself. Saints were popular subjects in art because images of their actions in life, and especially their deaths, were potent reminders of the power of faith.

Many of these works still speak to us today and elicit powerful emotions. Sometimes, though, the images that were meant to evoke reverence bring a smile to our lips. These are not one-offs done by dodgy artists but typical, if offbeat, symbols used to depict saints. Here are ten images of saints that are just downright weird. 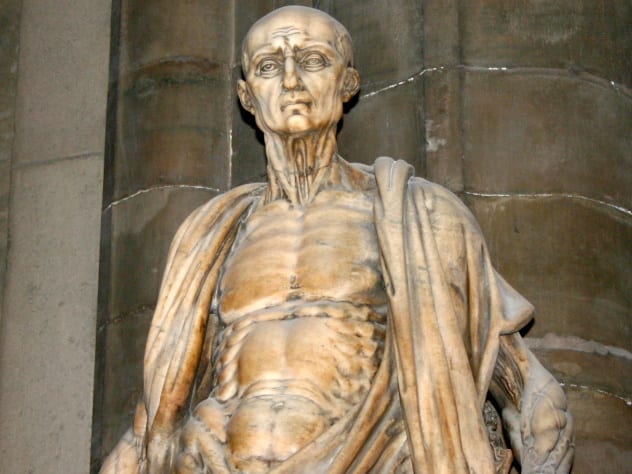 St. Bartholomew, one of the apostles of Jesus, had quite the exciting life after the crucifixion. Like the other apostles, he was commanded to go forth and spread the word of God, but to Bartholomew fell the mission to go far abroad and preach. Tradition has him going to Mesopotamia, Ethiopia, or most commonly to India. There, he knocked down idols, taught the Indians the Gospel of Matthew, and cast out demons. It was while he was later preaching in Armenia that he is said to have met his sticky end.

Bartholomew converted the brother of the king of Armenia. This somewhat annoyed the king, so he commanded that Bartholomew be flayed alive. This is why in statues and paintings around the world, Bartholomew is shown holding his own skin. In some versions, such as The Last Judgment by Michelangelo, Bartholomew is shown as a person both with skin and holding skin, but other artists chose the bloodier option of showing a flayed man with his bloody skin nonchalantly draped over him.[1] That’s one way at least to make sure that people don’t forget how much you suffered for your faith. 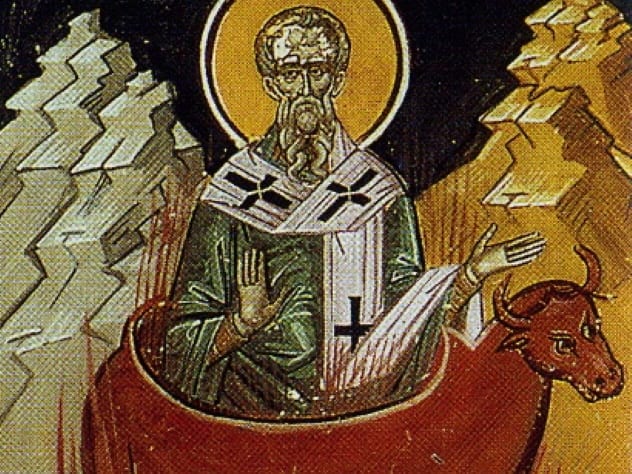 Little is known for sure about Saint Antipas of Pergamum. A brief mention in the Book of Revelation reveals that, “Antipas was my faithful martyr, who was slain among you, where Satan dwelleth.” This martyrdom has left us with some very bizarre images of the saint.

According to legend, St. Antipas was attacked by the pagan priests of Pergamum for not offering sacrifice at their temples. When told, “The whole world is against you!” Antipas replied, “Then I am against the whole world!” For his obduracy, the priests dragged Antipas to the temple of the goddess Artemis and placed him inside a hollow bronze bull. A fire was lit under it, and the saint was roasted alive.[2] Many images of the saint choose to focus on this aspect of his martyrdom.

Now Antipas is invoked as the patron saint of those with toothache—which seems to suggest either toothache is worse than most people think, or burning to death is not quite as painful as we imagine. 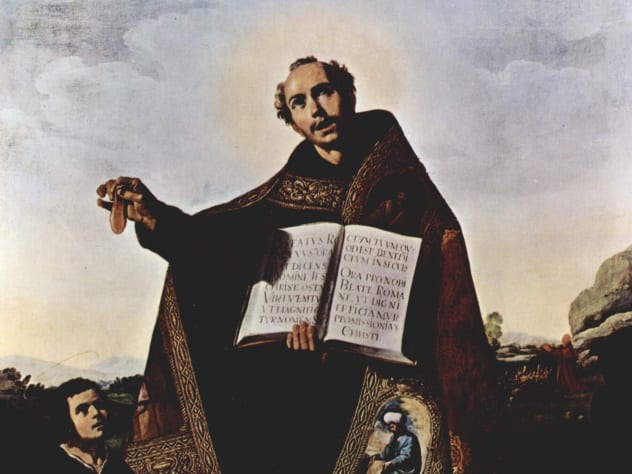 When you fear what someone has to say, it may seem like a prudent thing to do to rip out their tongue. This is exactly what the Romans did to Saint Romanus when he defied them, and it is with his flopping tongue in his hand that the saint can now be seen in paintings.

St. Romanus was a Christian at a time when this was not a good idea. The Roman world circa AD 300 still persecuted Christians because they did not support the official gods of the empire. During one of these persecutions, Christians were given the opportunity to escape punishment if they would make offerings at the altars of the pagan gods. When St. Romanus encouraged his fellow prisoners not to, he was singled out for special punishment.

First, he was beaten, then he was suspended and attacked with blades, and then his tongue was torn out.[3] Despite this verbal setback, the saint was still miraculously able to speak, so he was beheaded. Now the saint can be seen still wagging his tongue to spread the faith.

7 St. Margaret And The Dragon’s Belly 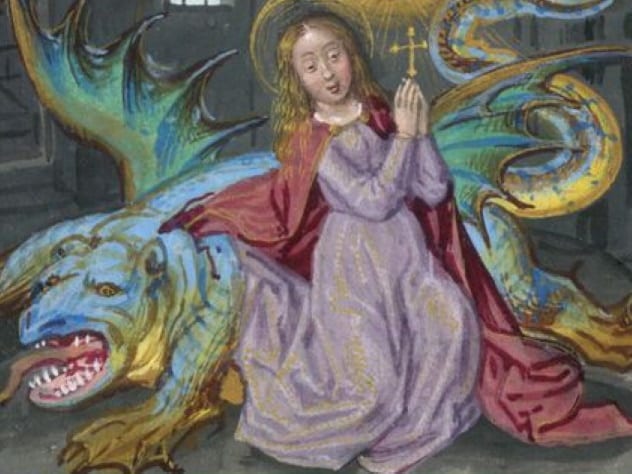 St. Margaret of Antioch has always been a favorite for artists because her life provided such a rich source of inspiration. As the patron saint of childbirth (for reasons which will be explained below), she was widely called on for aid, and images of the saint proliferated, leaving us with many examples of her struggles.

When Margaret was a young maid, a Roman official became besotted with her. Being a faithful Christian, Margaret refused his advances. Since he was miffed with being rebuffed, he had her thrown in prison. There, the Devil visited her in the form of a dragon and devoured Margaret, but by praying, she managed to burst out of the beast’s belly, hence the association with childbirth.

For artists, this image proved irresistible, and St. Margaret can be seen escaping from dragons of all shapes and sizes. She mostly manages to crawl out from their innards with her hair and clothes untouched by the gore around her.[4] 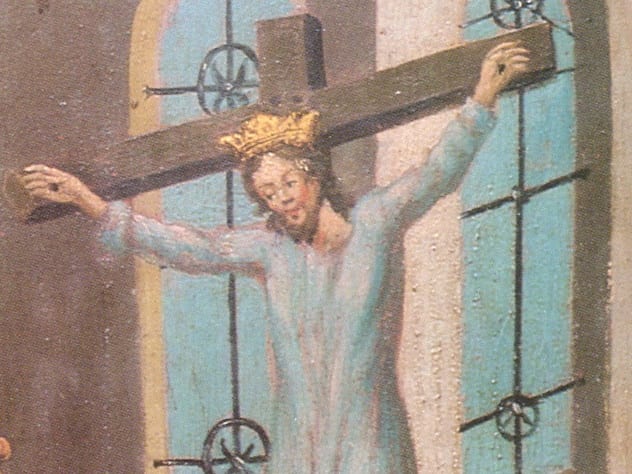 Everyone has had a date that they’ve wanted to get out of. Few have gone to the lengths of St. Wilgefortis, however, when it comes to avoiding romance.

Known by a number of names, Wilgefortis’s legend was a popular one for its folktale qualities. According to the tales, the young Wilgefortis was the daughter of a pagan king and had taken a perpetual vow of virginity. Her father, despite her holy oath, wished to marry her off to another king. To escape the coming wedding, Wilgefortis prayed to God to make her so hideous that no one would want to marry her. In the morning when she woke, Wilgefortis had sprouted a miraculous, if unbecoming, beard. The wedding was off![5]

Unfortunately for Wilgefortis, her father was not amused by her new hirsute appearance and commanded that she be put to death by crucifixion. This is why there are many paintings and statues of a young bearded woman on a cross to be found in churches around the world.

5 St. Roch And His Licked Legs 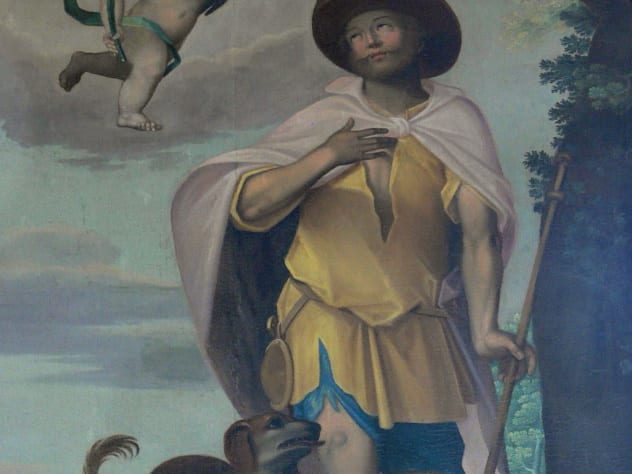 Saint Roch is a relatively little-known saint whose iconography mixes both cuteness and putrefaction at the same time. The cute part comes from his faithful dog, who is almost always shown with him. The less lovely part comes from the rotting sores that St. Roch seems to like showing off.

St. Roch was born to a noble family, and his saintliness was predicted when he was born with a birthmark in the shape of a cross on his chest. When his parents died, Roch gave away all his worldly belongings to the poor and became a holy man. He was so poor that he would have died had not a dog brought him bread to eat. He would also have died from infected sores on his leg if the dog had not licked them clean. Most paintings suffice so show him with the dog, but some actually show St. Roch being licked.[6]

St. Roch is now the patron saint of dogs and skin diseases, though neither dogs nor dermatologists would suggest licking as a way to clean wounds. 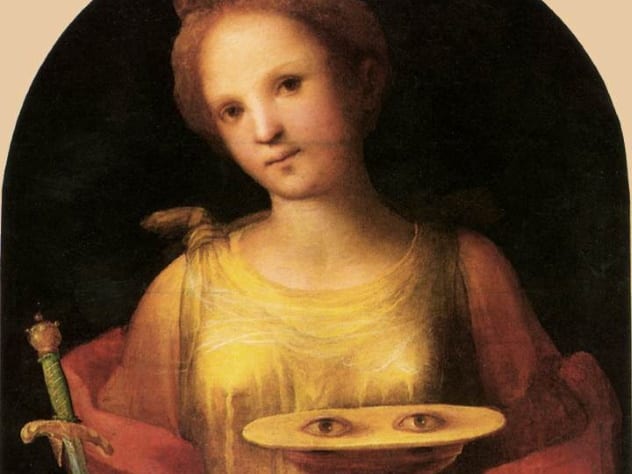 While it is common for women to say to men, “Hey, my eyes are up here!” for St. Lucy, that is not the case. In images of Lucy, she is often shown carrying a plate with her own eyes resting on it.[7]

St. Lucy was a Christian, but her mother was not. Her mother arranged a marriage to a local pagan, but Lucy longed to remain a virgin and to spend her dowry on the poor. St. Lucy took her mother to the tomb of Saint Agatha (who we shall meet later) and prayed for her mother to be cured of a sickness—the mother was cured and converted to Christianity at once. This was during a Roman persecution of Christians in the fourth century, and Lucy’s intended husband was not impressed by her faith and denounced her to the authorities.

Because Lucy would not recant her beliefs, the Romans had her tortured in many cruel and unusual ways, just one of which was the tearing out of her eyes. Other traditions have St. Lucy pulling out her own eyes to discourage her betrothed from the marriage. 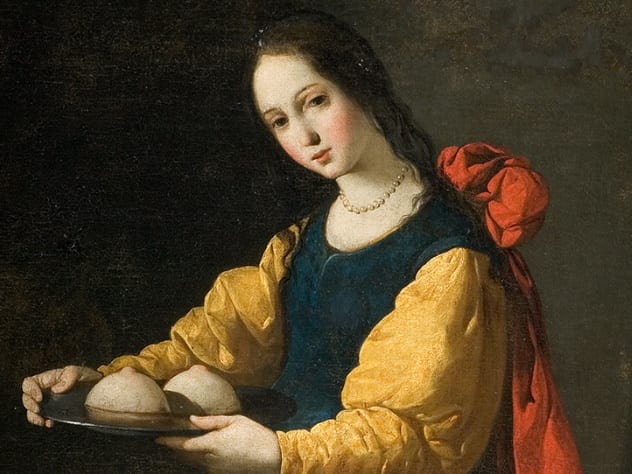 St. Agatha, who had aided St. Lucy, has a similar iconographic style to the younger saint. Instead of carrying her own eyes on a plate, however, St. Agatha prefers to carry her breasts. How they came to be off her body is the key to Agatha’s saintliness.

One of the most revered of the early martyrs, Agatha was born in Sicily. A highly beautiful woman, she was often faced with marriage proposals but had, from a very early age, dedicated herself to a life of pious chastity. A high-ranking Roman named Quintianus was not to be put off by her vows, however.[8] When she refused him one too many times, Quintianus informed the authorities of her Christianity and had her hauled up before a judge—Quintianus himself.

The less-than-impartial judge reveled in torturing the woman he had wanted to marry, and one of his savage acts was to have her breasts torn off. This act has proved too titillating for some artists to ignore, so St. Agatha is now often shown with her most memorable attributes on a plate. 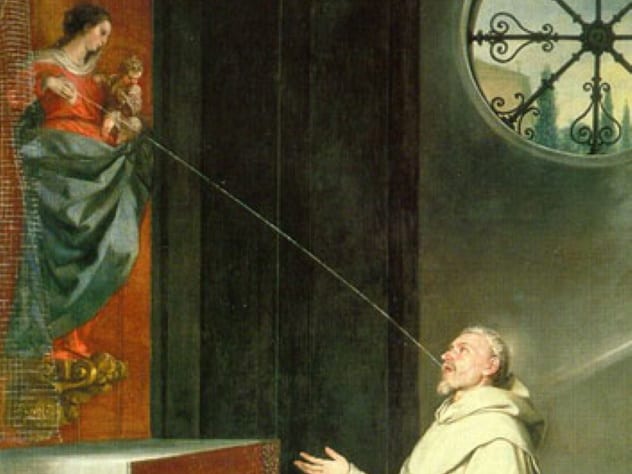 St. Mary, mother of Jesus, is held by many to be the ideal woman. Images of her nursing the infant Christ were popular ones in churches and were intended to show that as she nurtured Jesus, so she would nurture all humans. While this nurturing was metaphorical, there was one saint who received a more literal feeding of his faith.

One final variation shows St. Bernard not drinking the mother’s milk but being baptized in it as it hits him squarely in the middle of his forehead.

1 St. Christopher And The Dog’s Head 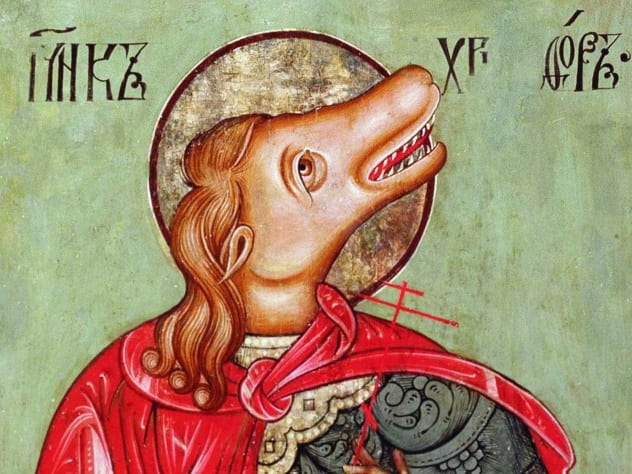 St. Christopher is one of the most famous and popular of Christian saints. Many wear his image around their neck, as he is the patron saint of travelers and is said to help people find their way back home. On his medals, he is often shown carrying a child (actually Jesus) across a river. What he is not usually shown as is a dog-headed man.

In some early icons of the saint, however, St. Christopher is shown with cynocephaly—having the head of a dog. This apparently bizarre artistic choice sprang from ancient misunderstandings of the world and texts. Beyond places known to the ancients, the world was said to be populated with exotic and weird varieties of humans. There were tribes with one foot who hopped everywhere, people whose faces were in the middle of their chests, and even cities of humans with dog heads.

One theory for why St. Christopher was shown with a dog’s head is that he was described as a Canaanite (cananeus), and someone misread this as “dog-man” (canineus).[10] Despite these depictions of St. Christopher falling out of favor, they can still be found in some churches and ancient manuscripts. He was a good boy, after all.

Read about more bizarre and intriguing art from the past on 10 Weird Trends That Keep Showing Up In Medieval Art and Top 10 Intriguing Images From Ancient Art.