Human history is dotted with temples. Today, their ancient walls often hold strange relics, some of which are the only evidence that missing temples once existed.

Not all places of worship are dusty ruins-and-pottery affairs, though. Many are still in service or the products of new religions. While the classic oldies tell tales of biblical wars and gory gods, modern sites are marked by unusual environmental success, digitally replaced parts, and spaceship temples for reincarnated extraterrestrials. 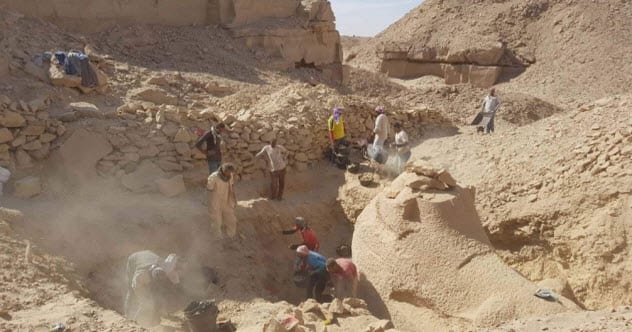 Along the banks of the Nile is a site called Gebel el-Silsila. During ancient times, it was home to workers and their families. Their business was to quarry limestone and carve statues.

In 2019, excavations found several new artifacts. The most impressive was a criosphinx, a creature with the body of a lion and a ram’s head. The sandstone carving had an impressive height of 3.5 meters (11.5 ft). It was also over 3,000 years old, which placed it near the end of pharaoh Amenhotep III’s reign. The statue was discovered inside a carving workshop but under a lot of quarry debris from a later age.[1]

Why the criosphinx was abandoned remains unclear as it was in good condition. One clue was a piece that broke off its head—a coiled cobra. This royal symbol suggested that the art was commissioned as a temple piece by Amenhotep III but canceled upon his death.

Indeed, it looked like an unfinished version of the statues at the Khonsu Temple in Karnak. Archaeologists also uncovered another temple-related find near the sphinx—hundreds of pieces of a shrine that was once dedicated to the same pharaoh. 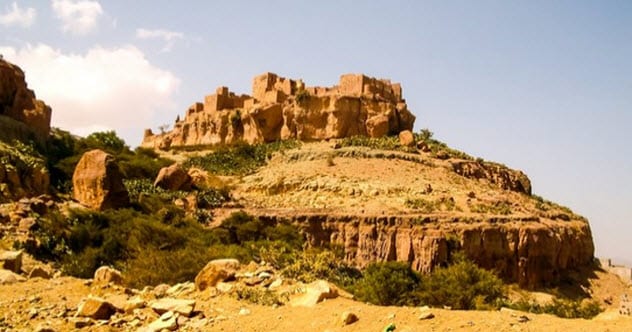 In 2019, scholars discovered a missing god. When a Colorado company auctioned off a tablet, it garnered the interest of scientists. The bronze artifact originated from Yemen and was 2,000 years old. Apart from its amazing age, the tablet had curious inscriptions from the Sabaic language.

After a translator pried a god’s name from the text, scholars realized that nobody had ever heard of this “Athtar Harman.” He might have fallen into obscurity. But according to the tablet, the deity was important and had his own temple.

Unfortunately, Athar Harman’s place of worship was as missing as a baby bird’s egg tooth. Ironically, the plate came from there. The text described its donation to the temple and hinted that it was near Sana’a, the capital of Yemen. How the artifact reached the United States remains unknown, although Yemen’s artifacts, including many inscribed bronze tablets, are often looted.[2] 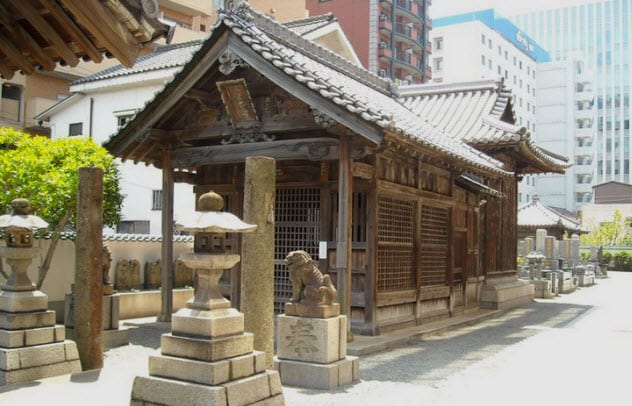 There is an unusual treasure at the Ryuguji temple in Japan. Visitors can view six bones, allegedly the last mortal remains of a mermaid. In 1222, the creature was found on the shore of Hakata Bay on the island of Kyushu.

After a shaman deemed the arrival as lucky, the skeleton was interred at the Ukimido temple. After receiving the body parts, the temple changed its name to Ryugu-jo, meaning “undersea palace of the dragon god.”

Sometime between 1772 and 1781, the relics were removed. However, visitors could still bathe in water that once soaked the bones. Several claimed that this kept them safe during epidemics.

The “mermaid” remains ended up in the Ryuguji temple in Fukuoka where they remain today. Japanese mermaids are called ningyo. These fishlike beings have different looks, and some descriptions give them horns and pointy teeth. Far from admitting an actual ningyo washed ashore, researchers believe that the 13th-century bones belong to a porpoise or dugong.[3] 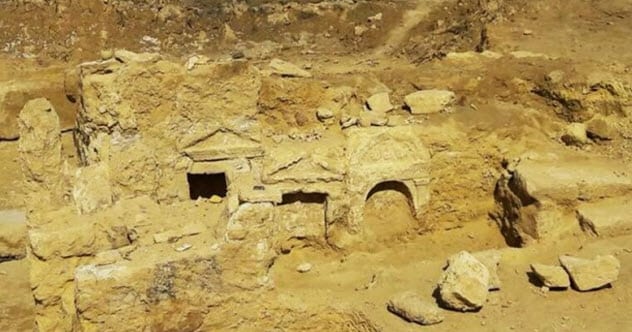 The Siwa Oasis supported an Egyptian community for thousands of years and under different foreign rulers. In 2018, the ruins delivered another great find. An unknown temple sounds mundane, but this one was also exceptionally scarce.

For starters, new temples are not a common find in Egypt. It was also a rare Greco-Roman building. Among the usual coins and broken pottery, archaeologists found a partial foundation, the front courtyard, the main entrance, and pillars with motifs.

Two lion statues turned up, including one without a head. There was also a sculpture of a human head without a body. Although many artifacts could still turn up, one of the most important contributions could be that of time.

Few buildings from this era exist (200 BC–AD 300), when Egypt was first under Hellenistic and then Roman control. The new temple might reveal more about these rulers and their influence on local culture as such sites also hosted religious, social, and trading events.[4] 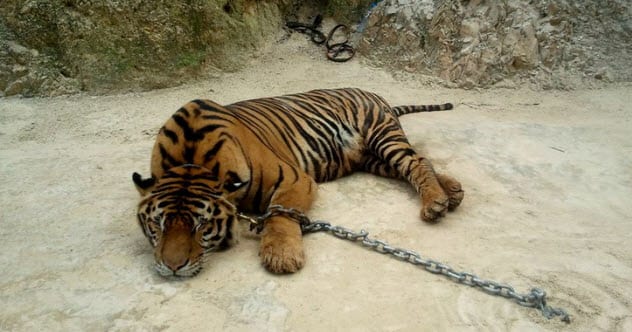 Thailand’s Wat Pha Luang Ta Bua Temple was also called the “Tiger Temple.” The monks lived with tigers that allowed visitors to feed and stroke them. In 2016, the heartwarming picture started to crack. Officials received complaints from tourists about getting attacked by the tigers while walking them.

Sharper tourists suspected that some of the cats were drugged. (The tigers could be bathed without a problem.) Foreign volunteers found 40 dead cubs in freezers. Admission was not free, either. To view the tigers, tourists had to cough up $273.

The temple was not an official wildlife sanctuary and was dogged for years by allegations of animal abuse and the trafficking of tiger body parts. A raid found 137 tigers—and the 40 dead cubs.

The police, veterinarians, soldiers, and civil servants worked together to remove the tigers, many of which were found to be inbred, blind, or chronically ill. All the predators were relocated to official sanctuaries.[5] 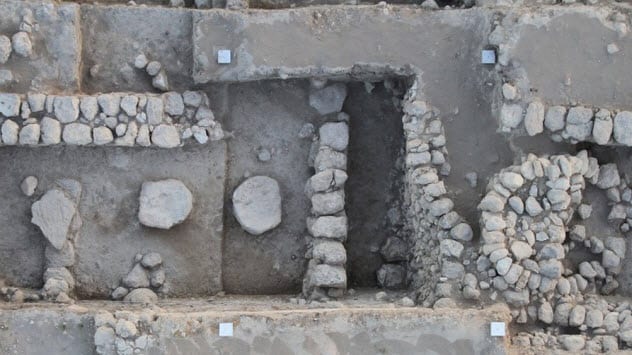 During the 11th century BC, the Canaanites, Philistines, and Israelites fought over Beth-Shemesh. The village was at the center of the three territories and near Jerusalem.

In 2012, archaeologists found a temple built at Beth-Shemesh while under Israelite control. Inside, ornate chalices and goblets proved that it was a place of worship.

However, the cups were shattered on the floor. When the ground was analyzed, it contained feces of livestock and plants eaten by them. To turn a temple into an animal pen would have been greatly disrespectful and never allowed. The only explanation was that the Philistines had taken over the village. Knowing it was a holy site to the enemy (and probably needing a pen), they chose the temple to hold their animals.

The temple also had ovens known as tabuns. The clay features suggested that the Israelites had reclaimed the site. Added long after the animal pen episode, tabuns were normal for the home but not a temple. Some researchers believe that they were installed to cook a feast to celebrate reclaiming Beth-Shemesh.[6] 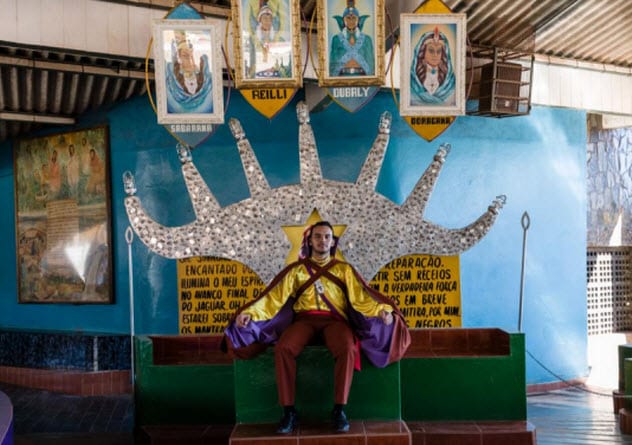 The Sunrise Valley movement has 800,000 members and 600 affiliated temples worldwide. Their spiritual center lies in Brazil, where one can find Vale do Amanhecer. The place resembles a theme park with replicas of the world’s wonders.

There is a temple complex with a pyramid, elliptical statues, prayer center, and temple that looks like a spaceship. The alien theme is not accidental. Sunrise Valley members believe that they are aliens called Jaguars.

Around 32,000 years ago, extraterrestrials arrived on Earth and kept returning, but they were in different incarnations (currently the Jaguars). The temple complex is used for personal reflection and rituals involving mediums and spirits.

Today the fastest-growing religious movement in Brazil, it had humble beginnings. The founder was a truck driver called Neiva Chaves Zelaya. After experiencing psychic visions in 1959, she started the movement.

It drew on Christianity, Judaism, Hinduism, ancient Egypt, and the Inca to shape a complex religion with a lot of sequined outfits. Seriously. Once you see Sunrise Valley followers, you cannot unsee them. They dress with a flair that equals Disney World workers.[7] 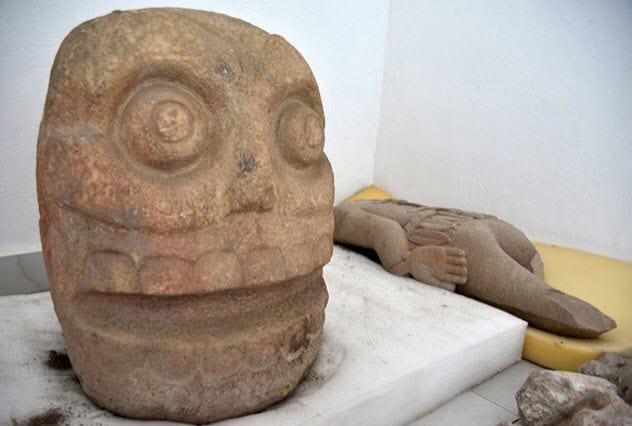 In Aztec culture, the god Xipe Totec was important. He lorded over the realms of new crops, war, and fertility—all the things Aztecs liked and needed. The deity might be less suitable for a modern audience. He was also known as the “Flayed Lord.” When priests and other participants performed rituals in Xipe Totec’s honor, they wore the skins of sacrificed humans.

In 2019, archaeologists found the first cult center devoted to the gory god. The complex was built in Mexico in the modern-day state of Puebla but not by the Aztecs. It dated between AD 1000–1260 and was probably constructed by the indigenous Popoloca people before the Aztecs conquered the region.

Inside the temple, three statues—skinned skulls and a torso wearing somebody else’s skin—were likely depictions of Xipe Totec himself. The temple’s features matched known descriptions of the horrific rituals. The most noteworthy resembled “garbage” holes where victims’ skins were discarded after being worn for days.[8] 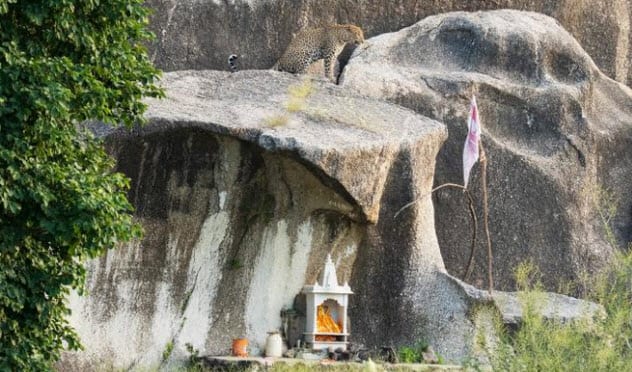 The world’s highest concentration of leopards exists in the Aravalli hills in India. The country’s track record with this predator is a painful one. Leopards are routinely slaughtered by hunters and fearful villagers.

The Aravalli animals thrive due to an amazing twist—a nearby village adores them. The people of Bera are members of a seminomadic tribe called the Rabari. They are devout followers of the god Shiva, the protector of wild things who wears a leopard skin.

Most of the Rabari believe that caring for wildlife is their duty and feed wild monkeys and peacocks at temples. Near the village, another temple is frequented by both leopards and the villagers.

A visiting National Geographic journalist witnessed the mutual tolerance firsthand. Villagers arrived with temple offerings and showed no fear when two adult leopards stalked past the shrine’s opening. The spotty pair ignored the humans and played with each other near the temple.

In fact, except for a nonfatal incident about 20 years ago, no human in Bera had been mauled for over 100 years. The leopards do kill livestock. But when that happens, the villagers accept it as a sacrifice to Shiva.[9] 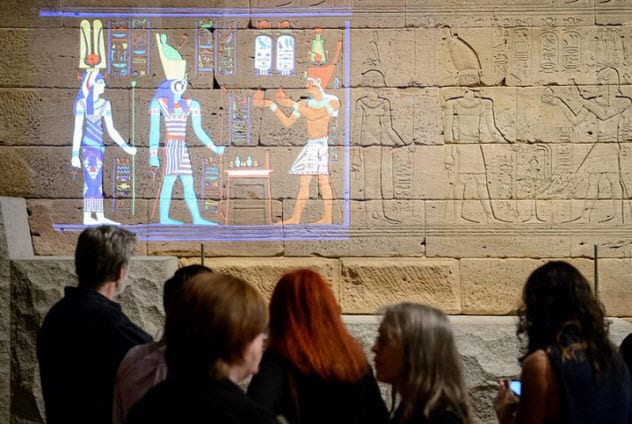 The Temple of Dendur once stood near the Nile. Today, its walls grace the Metropolitan Museum of Art in New York. Most visitors love the antiquity of the panels, estimated to be around 2,000 years old. The artful carvings also elicit some response.

However, the color surprised nobody. The monuments of ancient Egypt are mostly a sandy beige, and Dendur was no different. Experts have long been aware that bright colors once decorated Egyptian buildings.

In 2016, the museum wanted visitors to see how Dendur looked before the Nile’s repeated flooding stripped the temple’s paint. There was no way to replicate the original colors. Try as they might, researchers could not find pigments anywhere.

However, intensive research gave good alternatives and the result was magical. Thanks to light projection technology, vivid colors lit up a scene showing the gods Hathor and Horus receiving offerings from the Roman emperor Augustus. Tour guides could also highlight a single area or switch between the different color schemes that might have graced the original.[10]