Being rich gives you power and this power can make you feel invincible. Having wealth can help you escape consequences to a lot of things if not most things but sometimes your bad deeds will catch up to you. For most people on this list though their wealth protected them for years if not decades. Many people intuitively know that wealth protects people from the consequences of their actions but when confronted with it directly it really makes the blood boil.

SEE ALSO: 10 Things Rich People Do That You Don’t 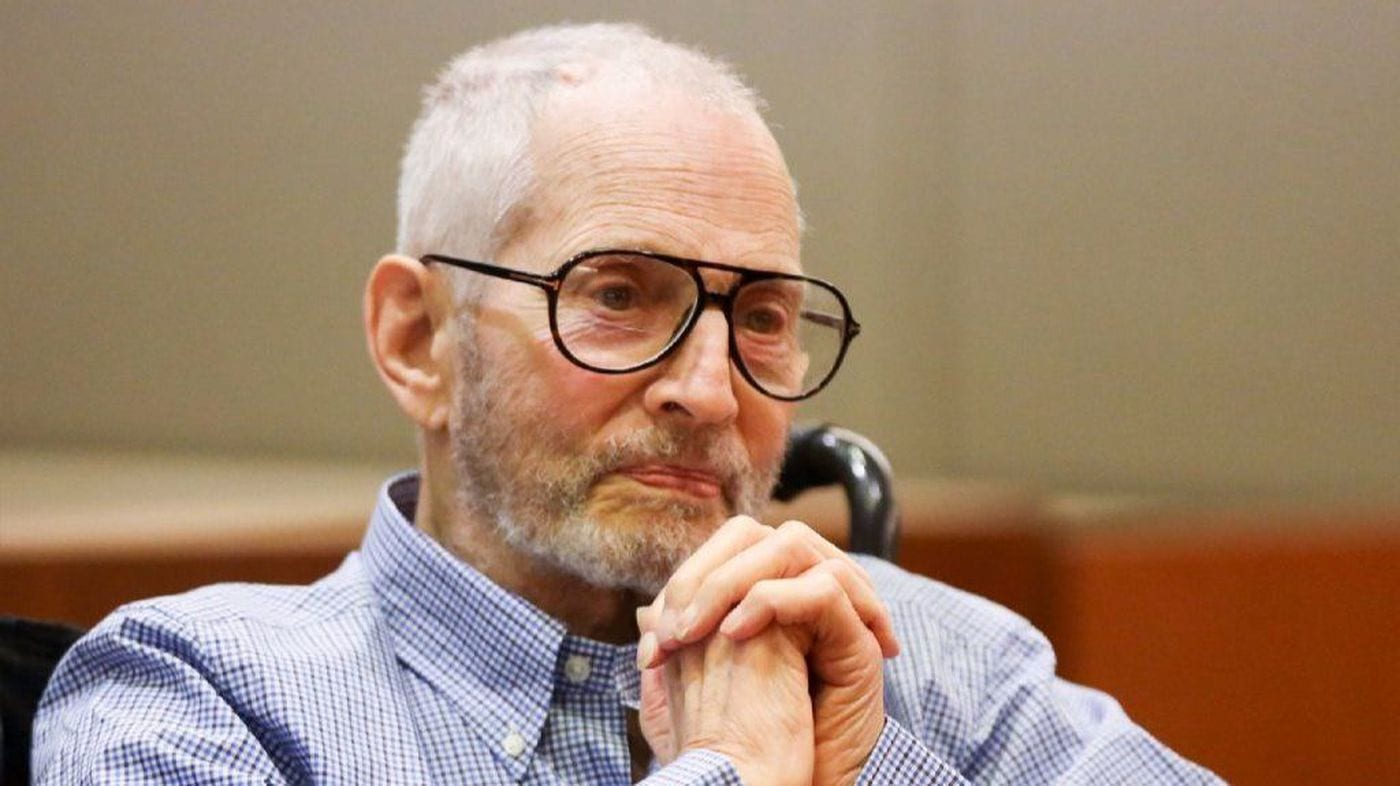 Robert Durst is the heir to American real estate mogul Seymour Durst. Robert Durst is suspected of murdering 3 people. Kathleen McCormack Durst, his first wife, who disappeared in 1982. His longtime friend Susan Berman who was killed in 2000, and lastly Robert’s neighbor Morris Black who was killed in 2001.These are the cases that have direct ties to Durst but it is speculated that he may have killed others. He was charged with murdering Black, but claimed at his 2003 trial that a gun fired while he was defending himself during a tussle with his neighbor. Testifying in his own defense, Durst said, “The gun was aiming at me. He was pushing the gun towards me, and I was trying to pull the gun away.” Despite the fact that Durst dismembered Black after this supposed tussle he was acquitted.

Durst was arrested for the murder of Susan Berman in 2015. The trial is still ongoing.[1] 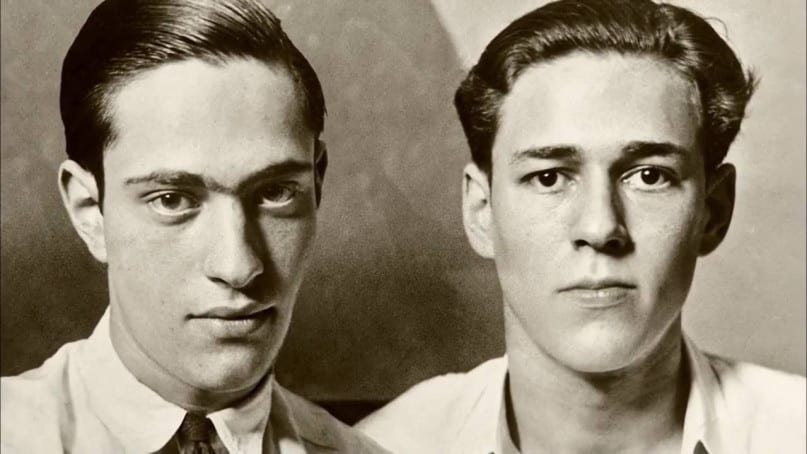 Nathan Leopold and Richard Loeb were sons of the extreme wealthy; and both were considered intelligent with promising futures. Despite this the young men would frequently commit small crimes like petty theft and would stake their futures on committing the perfect murder. They rode around looking for potential victims until they eventually settled on Bobby Franks. They coerced Bobby into their car. They killed him with a chisel and the next morning sent a ransom note to the boy’s family. Bobby’s body was quickly found along with a pair of eyeglasses. Police traced the prescription back to Nathan Leopold. The boys crime was discovered and they both quickly confessed.
Nathan Leopold and Richard Loeb were both sentenced to life in prison. Richard Loeb was stabbed in the prison showers and died at age 30. Nathan Leopold served 33 years in prison until he was paroled. He lived the rest of his life quietly in Puerto Rico.[2] 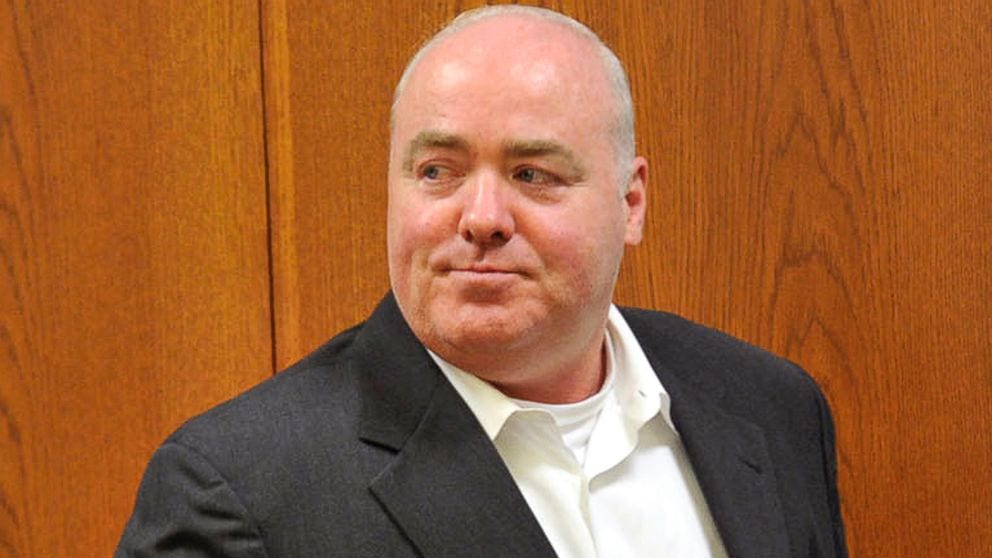 The Skakel family was a wealthy family and was closely related to the Kennedy’s. The father rarely visited his children, leaving them to run amok under the supervision of employees. The various nannies and tutors the Skakel family had over the years would later recount the torment they suffered from the Skakel children. A former nanny named Marie Kane stated “They used to kick me, Michael and Tommy. My legs were black and blue.”

Flash forward several years and Michael has a crush on a girl named Martha Moxley. Martha is later discovered dead, her pants and underwear pulled down and her head bashed in with a golf club that was resting next to her body. The golf club was traced back to the Skakel family. Thomas Skakel was actually the last person to be seen with Martha and is considered a suspect. Both Thomas and Michael are given lie-detector tests which they pass. Over the following years multiple people claim that Michael admitted to killing Martha. Michael’s story about where he was when Martha died changes over the years. In 2000 Michael Skakel was charged with Martha‘s murder and he was later convicted.

After several years of appeals Michael was granted a new trial because the court agreed that his first lawyer was inadequate. He hasn’t been retried and now lives as a free man.[3] 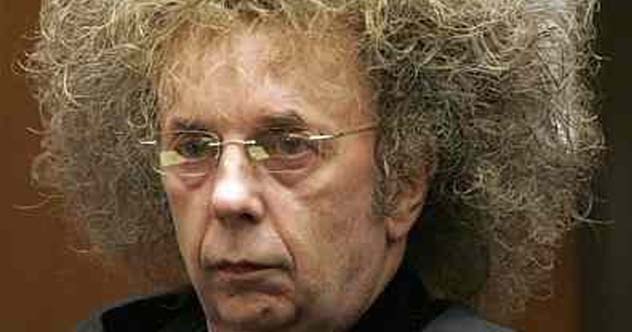 Phil Spector was a music producer responsible for lot of pop records that came out in the 1960s, working with famous singers like Ike and Tina Turner and John Lennon. He worked for decades as a famous and immensely successful music producer until his star faded, he fell into obscurity and became known as a recluse. Until 2003 when his name filled the headlines once again when he fatally shot actress Lana Clarkson in his home. He was charged with murder but his first trial in 2007 ended in a mistrial. During his 2008 retrial the judge ruled that the jurors could consider the lesser charge of involuntary manslaughter as well as the original murder charge. He was later found guilty of second-degree murder and sentenced to 19 years in prison. He’s filed several appeals all of which have been rejected.[4] 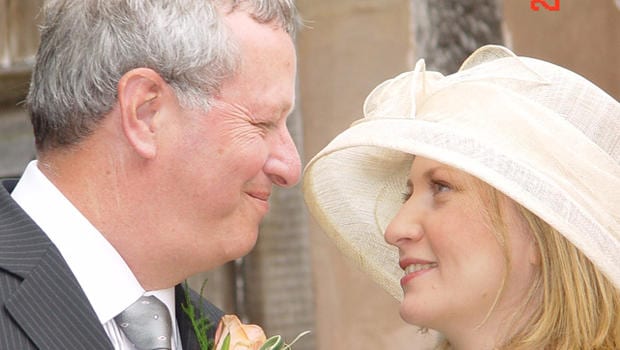 Harold Landry was a wealthy Texan living in England with his British native wife named Lucy Landry. He seemed to be living an ideal life from the outside but the couple’s relationship had soured and they both began seeing other people. Their marriage had become volatile and filled with anger. Lucy had asked for a divorce and Harold took precautions so that she would not benefit from one. On 1 February 2010 Lucy Landry was found dead. She had been stabbed over 20 times. Their children were in the backyard only steps away from finding their dead mother but luckily the police found her first. Harold was arrested and claimed that Lucy had attacked him with a knife and that he was defending himself. The prosecutor didn’t buy it. Harold Landry was sentenced to life in prison.

After the sentencing it was discovered that Harold had shot a man over a woman back home in the states. The man had lived and Harold plead guilty to a lesser charge of aggravated battery. He only got probation, a fine, and had to do community service.[5] 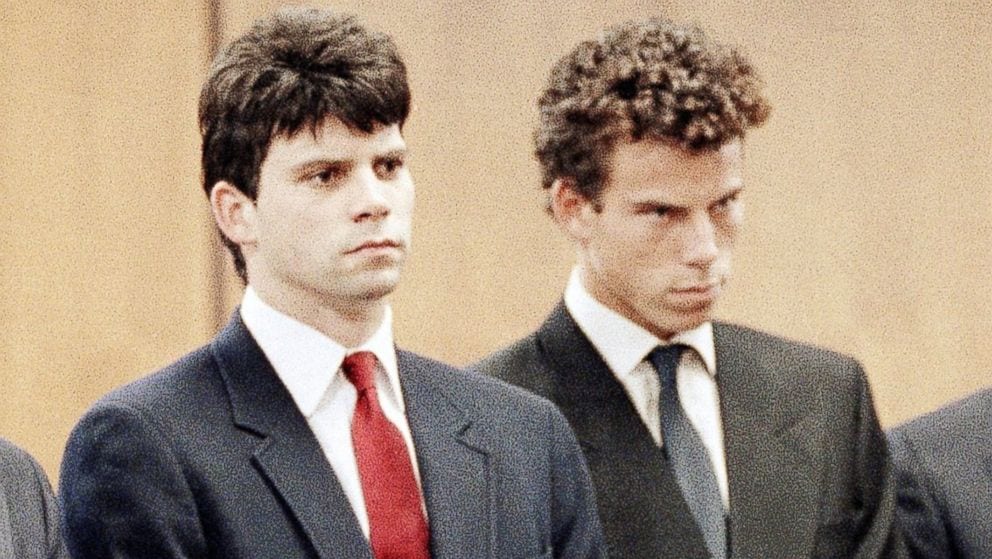 Lyle and Erik Menendez are the sons of wealthy entertainment executive José Menéndez and Mary Menéndez. When José and Mary were murdered the brothers weren’t initially suspected. After the death of their parents they immediately started spending the money they had inherited, they took vacations and bought cars and new homes. They went from unsuspected to the primary suspects. Erik confessed to killing his parents to his psychologist. He later threatened his psychologist and that psychologist told his mistress about Erik’s confessions and she told the police. The brothers were arrested.

At trial the brothers’ defense claimed that they had killed their parents because their father had been molesting Erik and that their father threatened them if they ever revealed this publicly. They brought in family members who stated that Erik had confided in them about the abuse. The first two trials ended in mistrials. The brothers were later convicted and sentenced to life in prison at a third trial.[6] 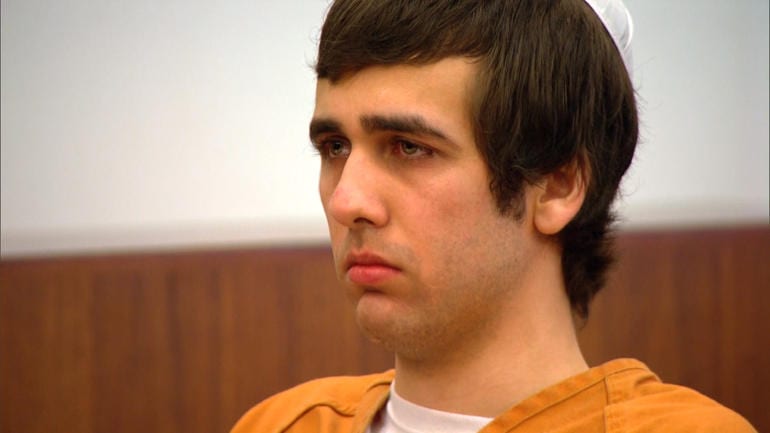 Ashton Sachs was the son of Andra and Brad Sachs. In 2014 Andra, Brad and two of their children were shot in their home while they slept. The children lived but one of them was severally injured and ended up being permanently paralyzed. Ashton acted the part as the grieving son. At his parents funeral he gave the eulogy saying “I remember in fifth grade. We had to do a report on who our hero was to us, but even as a 13-year-old boy, I knew right away my hero was my mom. I did my report on her.”

He had driven 18 hours through the night to his parents’ home. He brought automatic rifle and was wearing a black beanie and gloves. Ashton could provide no real explanation for why he had decided to kill his family. He decided to plead guilty and was sentenced to four consecutive life terms with additional penalties for enhancements.[7] 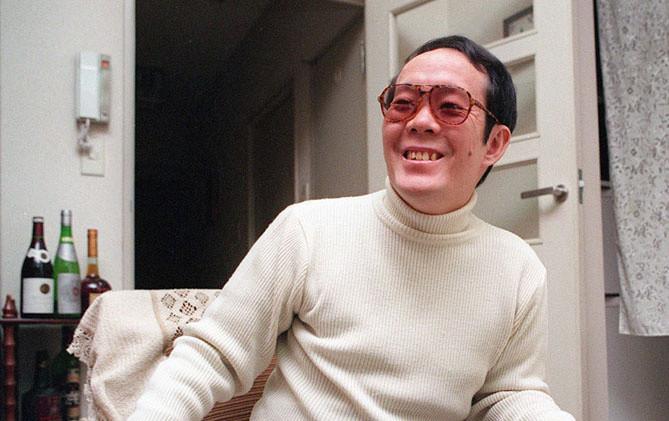 Issei Sagawa was born to wealthy parents and he led a fairly privileged life. Issei was reportedly interested in cannibalism from an early age but it wasn’t until his early thirties when he would finally act on it. He was studying in France and had lured a classmate named Renée Hartevelt to his home under the premise that he needed help learning German. When they were alone together he killed her then raped her corpse. Afterwards he began to eat her body. When the body began to smell he packed the dismembered pieces into a suitcase and planned to dispose of it in the park but he was caught in the process. He was confined to a mental hospital in France after his arrest but was eventually released to the custody of the Japanese. He was never tried in Japan and to this day he walks around as a free man. He received a small amount of fame after his release but this eventually fizzled out and since he was disowned by his family he struggles to make ends meet.[8] 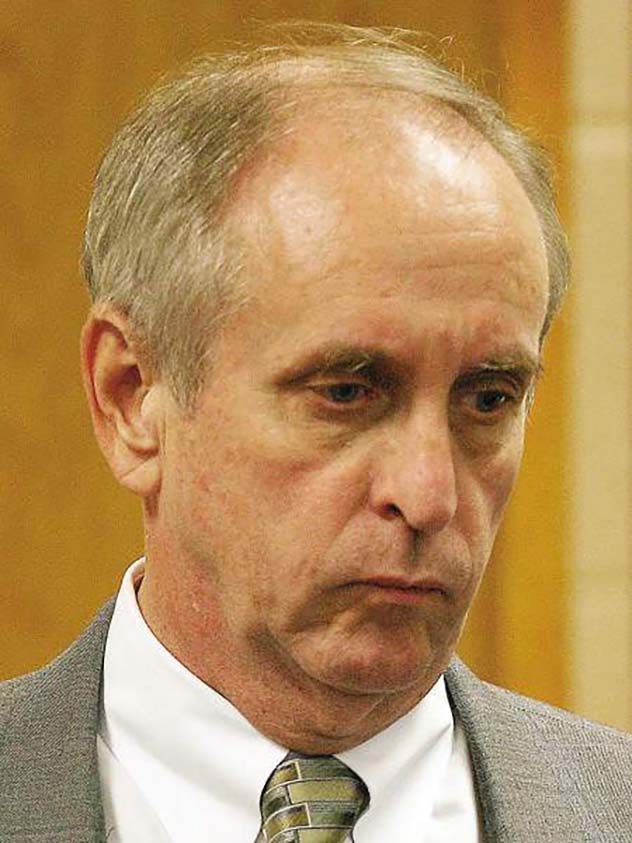 Millionaire John Brooks and his son Jesse paid several men to kidnap and murder a handyman named Jack Reid. Brooks had believed that Reid had stolen from him so he conspired with his son to have him killed. The men Brooks’ had paid testified that on Brooks’ command they had lured to the barn, beaten Jack Reid with a hammer, wrapped his body in plastic, placed the body in the back of Reid’s own dump truck and drove the dump truck to a store parking lot where they abandoned it. They were each paid a measly $10,000 to end Jack Reid’s life.

John Brooks was found guilty of first-degree murder and conspiracy to commit murder came after one day of deliberations.[9] 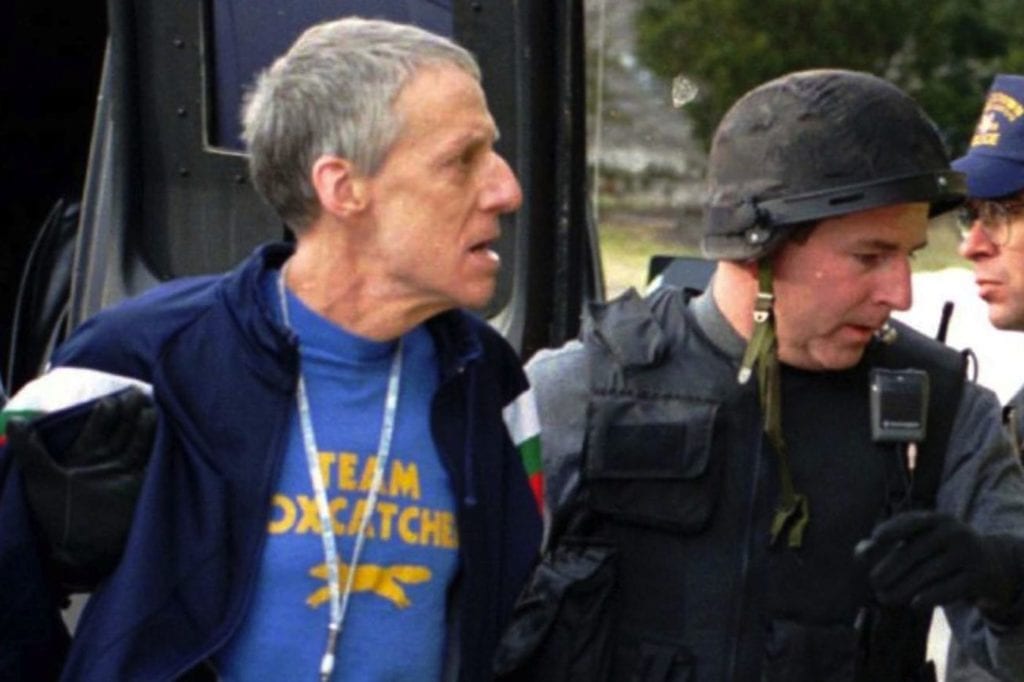 John Du Pont was a wealthy heir to the Du Pont family fortune. He was also what some might call strange and obsessive. He developed an all-consuming passion for wrestling that lead to the tragic murder of Dave Schultz. According to those who witnessed the murder John was going through a time of extreme stress and he shot Dave abruptly and seemingly for no reason. John locked himself away in his mansion for two days while he negotiated with police on the phone. The police turned the electricity off and caught John as he went out to fix the heater. Du Pont pleaded not guilty by reason of insanity but his defense was thrown out by the court and a jury found him guilty.

For more lists like this look at 10 Weirdest Stories About The Eccentric Rich, and 10 Ridiculously Fabulous Displays Of Wealth In History