Weapons are the idiomatic double-edged sword. They could kill or save lives, depending on how they are used.

Over the years, creative minds have developed ways of converting deadly weapons into peaceful items. It could be for art, fashion or more practical reasons like preventing famines and generating electricity. The weapons here range from small knives to automatic assault rifles, rocket launchers, armored tanks, helicopters and nuclear missiles. 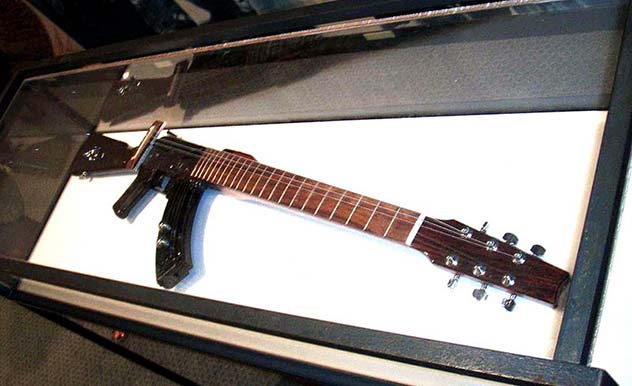 Escopetarra (“shotgun guitar” in English) is coined from the Spanish “escopeta” (shotgun) and “guitarra” (guitar). As you should have guessed, the term refers to a gun that was converted into a guitar. The word is somewhat of a misnomer since the guitars are made out of assault rifles, mostly AK 47s, and not shotguns.

Colombian musician, César López, invented and named the escopetarra after observing the aftermath of a deadly car bombing in the early 2000s. The explosion killed 36 people and injured 170 others outside a nightclub in Bogotá, Colombia.

López observed that a soldier at the scene held his rifle as if it were a guitar. This motivated him to make a guitar out of an old AK 47 assault rifle. López still makes escopetarras today—all out of rifles surrendered by one of the many militias involved in the Colombian civil war.[1]

9 The Throne Of Weapons And The Tree Of Life 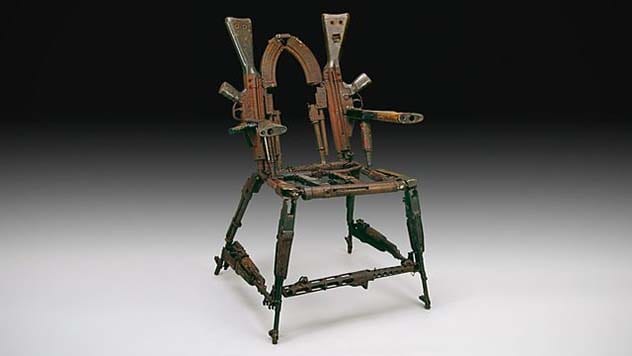 The southeastern African nation of Mozambique fought a bitter civil war between 1977 and 1992. By the time it was over, over one million people were dead and another five million were homeless. At the end of the war, the government recovered seven million weapons by allowing former fighters exchange their weapons for farm tools under the “Transforming Arms into Tools” program.

In 2001, Mozambique artist, Cristóvão “Kester” Canhavato welded some of these weapons to create a sculpture he called the Throne of Weapons. The sculpture contains weapons from rival countries. There are rifles from the west, Russia, Portugal and North Korea. All were used in the civil war.

Another group of Mozambican artists created a second sculpture from the recovered weapons. This one was a three-meter-tall tree surrounded by several animals. They called it the Tree of Life. Unlike Kester, who exclusively made his sculpture out of assault rifles and magazines, these artists used rifles, pistols, magazines and rocket grenade launchers.[2] 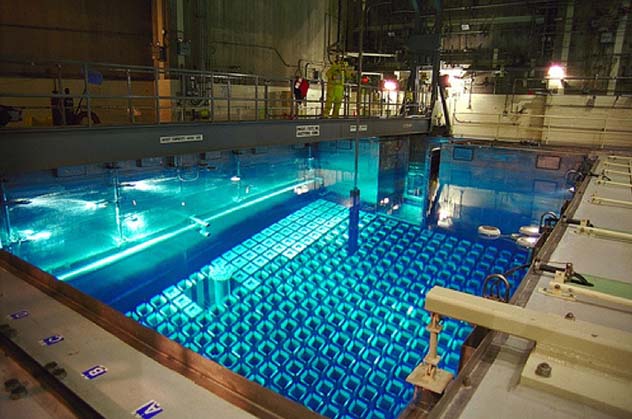 While many Americans do not realize this, Russia used to be responsible for one-tenth of the electricity generated in the US. The whole thing started at the end of the Cold War when Russia and the US agreed to decommission a large part of their nuclear stockpiles.

In 1993, both nations signed the U.S.-Russia HEU Purchase Agreement. The deal required Russia to process the uranium from its decommissioned weapons into nuclear fuel that will be sold to the US. The US would convert this fuel into fuel rods to power US nuclear plants.

The deal was a win for Russia. They got paid to destroy their nuclear weapons. As Anton Khlopkov of Center for Energy and Security Studies in Russia later said, “This is the only time in history when disarmament was actually profitable”. The deal ended in 2013 when the last batch of nuclear fuel was shipped to the US.[3] 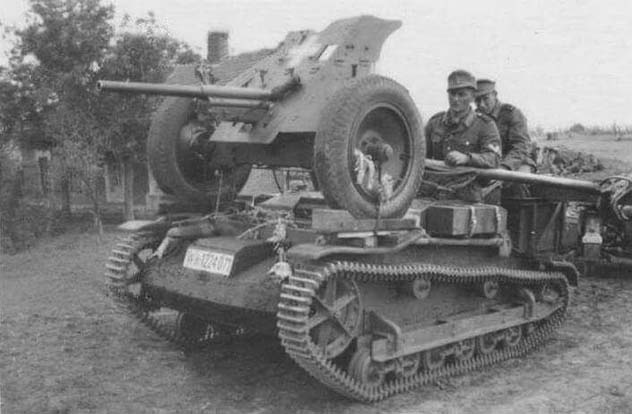 French farmers were in a fix at the end of World War II. First, their farmlands were crisscrossed with trenches and deep craters caused by exploding artillery shells. However, that turned out to be the smaller problem. Their farm machineries, particularly the tractors they required for any farm work, were either destroyed or shipped to Germany by the Nazis.

The French army saved the day when it converted its 3,000 surplus M 17 (FT) Renault armored tank into makeshift tractors. The conversion was easy and swift. The armor and weapons on the tanks were removed, and one or two things were added, turning them into tractors.

The process was a win-win for the French people, farmers and army. It saved France from famine, provided farmers with tractors they could otherwise not afford and allowed the military dispose its useless tanks for cheap. As the French military told the farmers, “Those little tractors that whipped the Hun will undo much of what the Hun has done”. Hun here referred to the Germans.[4] 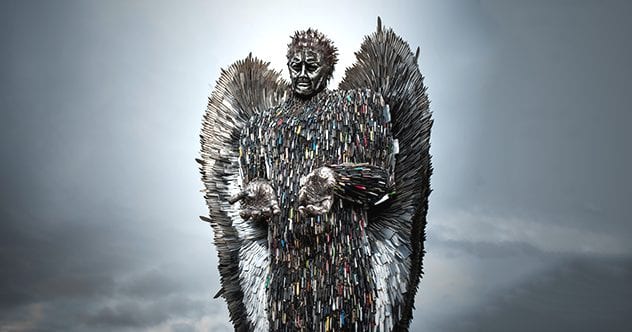 The Knife Angel (officially called the National Monument against Violence and Aggression) is a 27-feet-tall statue made by the Oswestry, UK-based National Ironworks Center. The statue was made out of 100,000 knives and blades police officers seized from crime suspects across the UK.

The National Ironworks Center created the statue as a tribute to the victims of knife crimes. In fact, 30% of the knives contained blood at the time police transferred them to the center. The center received so many knives that they had enough to create a second statue of a police dog.

Unlike the Knife Angel, the dog monument contained dog whistles, tags and gun parts. According to the center, the statue was a tribute to every dedicated, brave and hardworking police dog out there. It was presented to the West Mercia Police Department, which installed it right outside their headquarters in Hindlip, West Mercia, UK.[5] 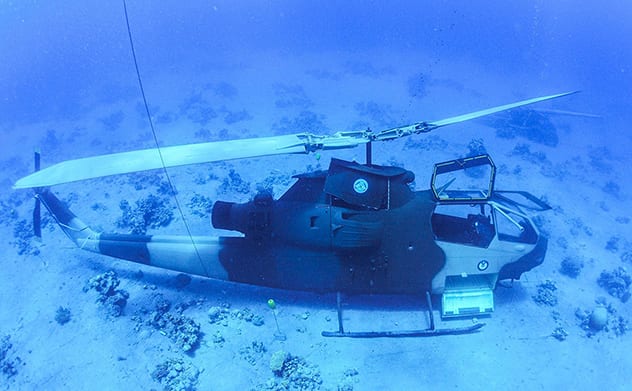 Coral reefs are important for the survival of underwater life. Unfortunately, they are getting destroyed by humans and shifts in the earth’s climate, prompting responsible governments to create artificial reefs out of old subway cars and anything else that can survive underwater. Jordan did things a bit differently by making artificial reefs out of decommissioned military tanks, armored vehicles and helicopters.

The weapons were sunk between 50 to 90 feet below the Red Sea, just off the coast of the Jordanian city of Aqaba. Jordan already has 19 decommissioned weapons there as of July 2019, and hopes to grow this number as it gets more weapons. It hopes that the reefs will double as a museum and tourist attraction.[6] 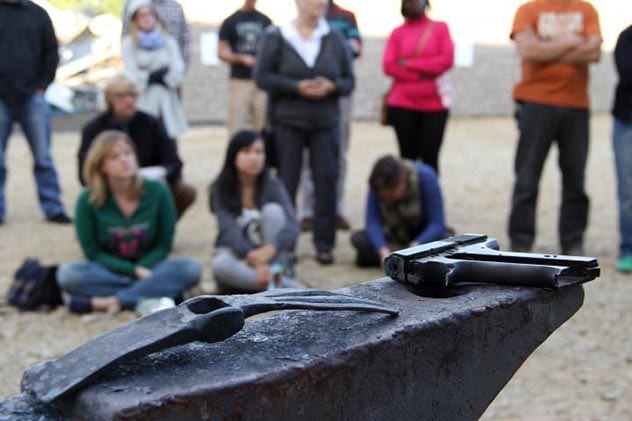 Swords to Plowshares is a program by RAWtools, a Christian nongovernmental organization that wants to reduce gun violence. Under the program, people turn in their weapons and have them converted into farm implements. So far, RAWtools has converted AK 47 and AR-15 assault rifles into spades, plows, hoes, mattocks and trowels.

Recovered guns are cut into pieces before they are sent into the furnace. Thereafter, the red-hot metal is beaten into shape. Victims of gun violence and anti-gun violence advocates are allowed to take turns in beating the guns into farm tools.

Mike Martin, who founded RAWtools, said he was inspired by an Old Testament verse about the world only becoming peaceful when weapons are turned into farm tools. However, he only launched the program after the deadly December 14, 2012, Sandy Hook elementary school shooting. 28 people were killed and two others were injured in the shooting, which remains one of the deadliest school shootings in US history.[7] 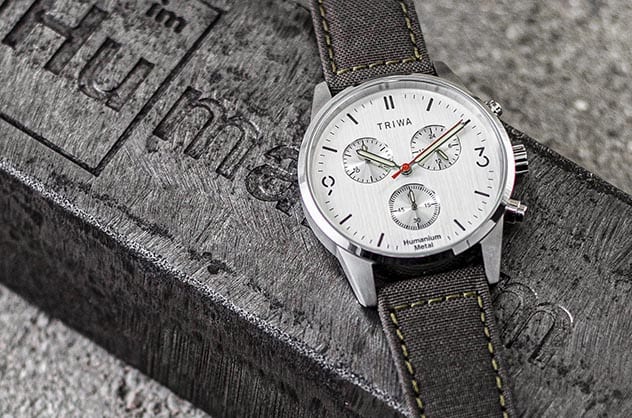 IM is a Swedish organization that works closely with Latin American governments to get illegal guns off the streets and repurpose their metals for other things. IM calls this metal Humanium metal.

In 2018, it partnered with Yevo Labs to release the special edition Yevo 1 wireless earbuds. Parts of the earbuds and the charging case are made out of Humanium metal. To be clear, Yevo Labs had earlier released the Yevo 1 earbuds, which did not contain any gun part. The one that contained gun parts was a special edition version.

The same year, IM partnered with watchmaker, Triwa, to make watches out of Humanium metal. The guns used in the watches had been seized by police officers in El Salvador.[8] 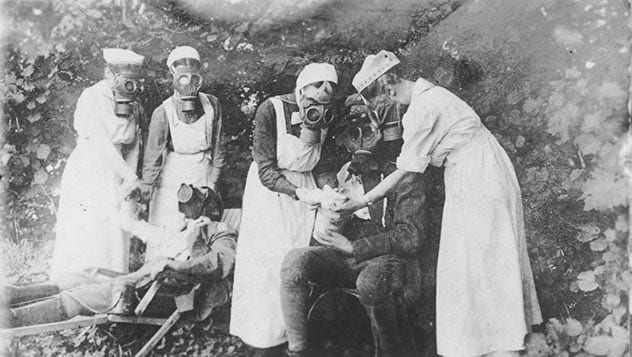 Chemical weapons were widely used during World War I. In fact, the war is nicknamed the Chemist’s War because chemists of the day were actively involved in developing chemical weapons for their sides. Chlorine, xylyl bromide and mustard gas all made their debut in the battlefields of World War I.

While all three were deadly, mustard gas hit a new level of lethality. It was first deployed by Germany against Allied troops in Ypres, Belgium, in July 1917. 10,000 Allied troops were killed in this single attack and more were injured.

Unlike other chemical weapons, mustard gas was immune to gas masks since it could penetrate the body through the skin. Protective clothes did not help since it went through clothes too. Victims of the attack ended up with bloody coughs and itchy skins filled with deadly blisters. A slow, painful death came six weeks later.

Two decades later, as the world prepared for World War II, Allied scientists started researching into preventing and curing mustard gas attacks. They clearly did not want any surprises this time. Two Yale University doctors, Louis Goodman and Alfred Gilman, discovered that soldiers poisoned with the gas during World War I had lower white blood cells than other people did.

To confirm their theory, the researchers injected some subjects with nitrogen mustard and watched as their leukemia disappeared after several treatments. They were right. Mustard gas cured cancer. This was the first chemotherapy session and it formed the basis of cancer treatment today.[9] 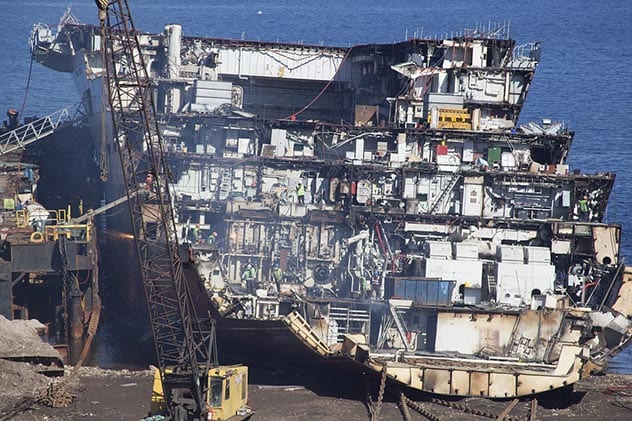 Ships are made of steel—tons of raw steel that is recycled when they get old. 95% of the average ship is completely recyclable. This figure includes warships. They are cut and processed into new products, just like regular ships. These products could be anything including pots and pans.

One decommissioned warship that made the news before its scrapping was the HMS Invincible, a British naval ship that saw action in the Falklands, Balkan and Iraqi wars. The British navy sold the ship to Leyal Ship Recycling of Turkey for £2 million ($3.2 million).

The sale was considered ridiculous because it happened over the internet. But it appears that decommissioned warships often get sold over the internet. While it sounds good to know that warships get recycled, the task of cutting ships—warships inclusive—into pieces is actually difficult, complicated and dangerous. Many people die while trying to cut ships into pieces every year.[10]

For more lists like this, check out 10 Things You May Not Have Known About Guns, and 10 Fascinating Facts About Guns In Pop Culture