Ted Bundy is known as one of the worst serial killers of all time. The seemingly charming all-American boy and law student, in fact, was a twisted monster who had kidnapped, raped, and murdered 30 young women and girls during the 1970s in several different states.

Bundy claimed he was an innocent man, but evidence including eyewitness testimony, fibers, hair analysis, and hotel receipts had landed him on death row. The night before his execution on January 24th, 1989, at Florida State Prison, he finally confessed to all of the murders.

These are the final days of Bundy. A man who will always be known as beyond evil for many more decades to come.

In June 1979, Ted Bundy was sentenced to death by electric chair for the murder of two Florida State University sorority members. It would be fair to assume that Judge Edward D. Cowart of Dade County Circuit Court—who heard gruesome testimonies from witnesses and viewed disturbing evidence of victims who were sexually tortured—would hold no empathy for the sadistic killer. However, the final statement from Judge Cowart directed at Bundy appeared almost complimentary. 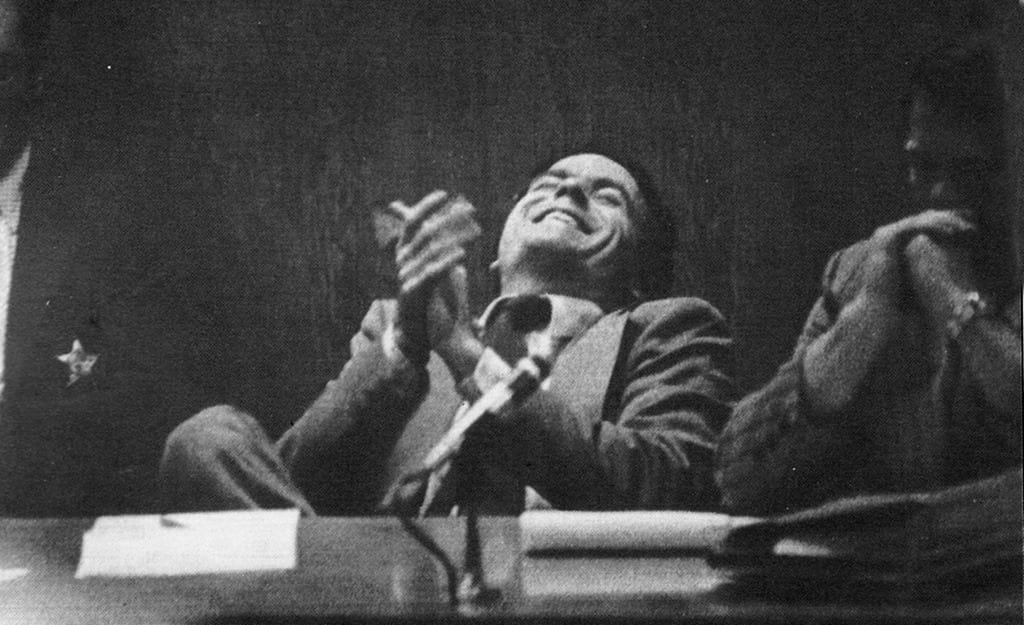 Bundy notoriously told police officers following his arrest, “I am the most cold-hearted son of a bitch you will ever meet.” He really was not wrong. Throughout the murder trials, Bundy never admitted his guilt or apologized to the families of the many victims. His own personal belief was that guilt is an emotion used to control people, and he also believed that displaying any remorse was a weakness.

In the death row interviews conducted with Stephen Michaud and Hugh Aynesworth for the book Ted Bundy: Conversations with a Killer, Bundy truly revealed his dark side. He said, “Guilt. It’s this mechanism we use to control people. It’s an illusion. It’s a kind of social control mechanism, and it’s very unhealthy. It does terrible things to the body.” He also explained, “I don’t feel guilty for anything. I feel sorry for people who feel guilt.” Adding chillingly, “What’s one less person on the face of the earth, anyway?”

In the 1980s and 1990s, 48 teenage girls and women were found brutally murdered in Washington. Investigators worked tirelessly to catch the suspected “Green River Killer,” who managed to evade capture for 16 years. Then King County homicide detective Robert Ressler struck up an unusual relationship with Bundy after a letter from the serial killer.

Ressler recalls, “One day in October 1984, I was buried in a pile of paperwork on my desk. I looked up to see Detective Ed Striedinger of the Seattle Police Department. He had retrieved a letter from a judge in Pierce County who wanted it delivered to task-force staff. It was a letter from a “wanna-be” consultant and the most unlikely person I ever expected to be of assistance in the Green River murders. The letter came from a cell on death row in Florida; the sender was Theodore Robert Bundy. I was stunned.”

Bundy and Ressler then worked together as the team that built a profile of the killer. Finally, in November 2001, Gary Ridgway was arrested and found guilty of the murders. The profile Bundy helped create matched Ridgway perfectly and was considered an important contribution to the investigation.

7 The Exhausting Appeals to Delay Execution 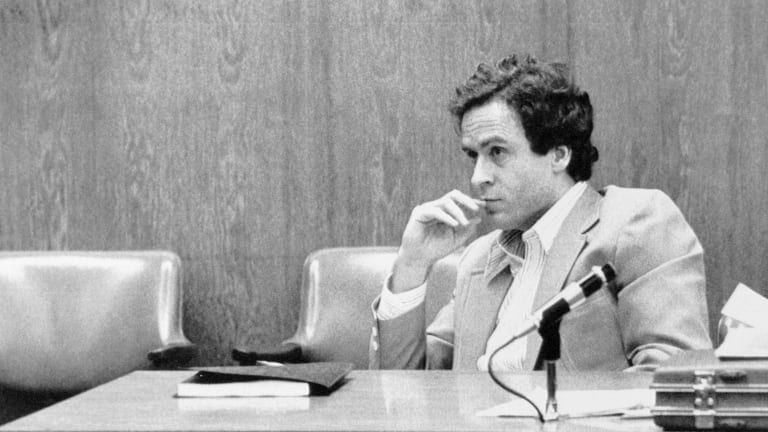 Just seven hours before Bundy’s pending execution, his defense lawyers issued an appeal that he was mentally incompetent when he stood trial in 1980 for the murder of a 12-year-old Kimberly Leach in Lake City, Florida. They argued that Bundy’s bizarre outbursts in court whilst representing himself as his own lawyer were clear enough evidence that he was not fit to stand trial.

Bundy’s legal team managed to win him an extra day on the planet, as three judges of the United States Court of Appeals agreed there was insufficient time before the scheduled 7 am execution to assess the appeal. Considering they would need longer to hear his attorney’s arguments, they were granted a court order to temporarily suspend the execution.

This was Bundy’s second successful attempt to dodge the death penalty; however, the appeal was eventually unsuccessful. Governor Bob Martinez, who personally signed Bundy’s death warrant, stated, “Justice has been on hold for a decade, and it’s about time Ted Bundy paid for his crimes.”

On January 24th, 1989, in the final hours before his execution, Bundy spoke to evangelical campaigner and psychologist Dr. James Dobson at Florida State Prison. He finally admitted he was guilty of the murders. The interview lasted 45 minutes, and Bundy confessed that it was a pornography addiction that drove him toward becoming a homicidal maniac.

He said, “My experience with pornography that deals on a violent level with sexuality is that once you become addicted to it—and I look at this as a kind of addiction—like other kinds of addiction… I would keep looking for more potent, more explicit, more graphic kinds of materials. Like an addiction, you keep craving something which is harder, harder. Something which gives you a greater sense of excitement. Until you reach the point where the pornography only goes so far.”

Adding, “We are your sons, and we are your husbands. And we grew up in regular families. And pornography can reach out and snatch a kid out of any house today.”

On the day of his execution, Bundy made one last phone call to his mother, Louise Bundy. His mother did not attend the execution as she revealed it would have been too painful. Speaking with journalists at her home in Tacoma, Washington, she said, “It’s a circus, and we didn’t feel the agony we would go through by going down there would compensate for a few minutes talking to Ted through the glass. And he also felt that way too.”

Bundy’s relationship with his mother was an unusual one as, throughout his childhood, he was raised to believe she was his sister and that his grandparents were his biological parents. It wasn’t until a cousin revealed his birth certificate that Bundy discovered he was an illegitimate child as his mother, Louise, had given birth at a home for unwed mothers. The true identity of his father was never revealed.

His mother never believed her son could commit such horrendous crimes as he swore to her for 13 years whilst on death row that he was innocent. She said, “We believed him. We wanted to believe him. He’s still our son, no matter what he’s done, and we love him very much.” 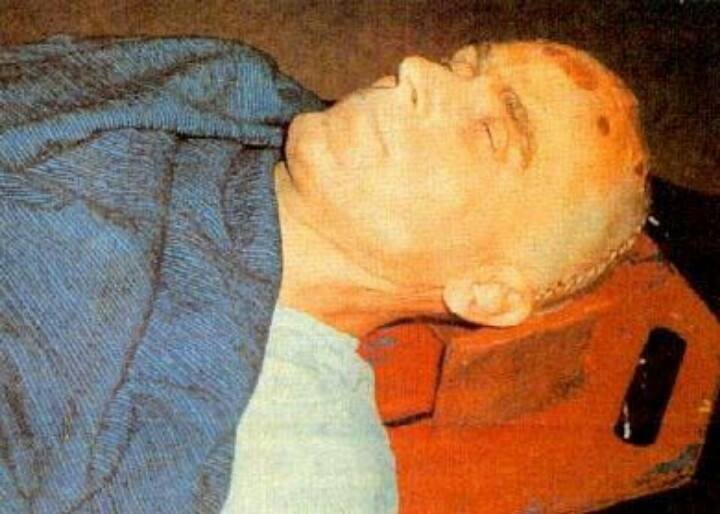 During the early hours of the morning, he was offered a final meal but refused. Instead, he was served the standard last meal of steak, eggs, and toast but left this untouched. Bundy was then led to the execution chambers. He nodded to the 42 witnesses who sat behind the glass—amongst them was the prosecutors who had sent him to the chair at Florida State Prison in Raiford, Florida.

When he was asked if he had any last words, Bundy replied, “Jim and Fred, I’d like you to give my love to my family and friends.” Jim Coleman was one of his lawyers, and Fred Lawrence was the Methodist minister who had sat with Bundy the night before his execution in prayer.

It was then reported: “A last thick strap was pulled across Bundy’s mouth and chin. The metal skullcap was bolted in place, its heavy black veil falling in front of the condemned man’s face. An anonymous executioner pushed the button. Two thousand volts surged through the wires. Bundy’s body tensed, and his hands tightened into a clinch. A tiny puff of smoke lifted from his right leg.”

“A minute later, the machine was turned off, and Bundy went limp. A paramedic opened the blue shirt and listened for a heartbeat. A second doctor aimed a light into his eyes. At 7:16 am, Theodore Robert Bundy—one of the most active killers of all time—was pronounced dead.” 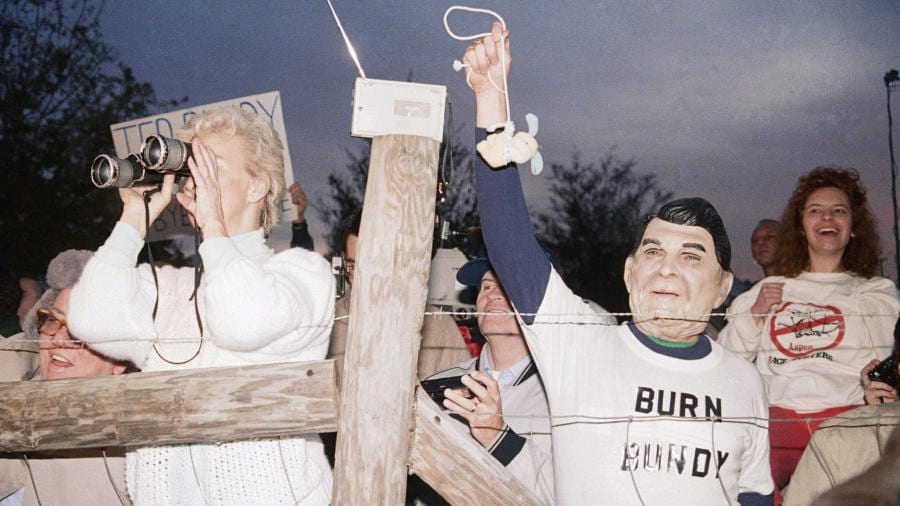 The total cost of Bundy’s lengthy prosecution, which included many appeals, and his time on death row for a decade is believed to have cost the state an estimated $5 million. He also successfully escaped prison on two separate occasions.

Outside Florida State Prison, a crowd of 500 people gathered, and they cried out, “Burn, Bundy, burn!” whilst others banged on frying pans. Street vendors also sold t-shirts emblazoned with a cartoon of Bundy strapped in the electric chair to the frenzied crowd.

Students gathered holding banners that read: “Thank God it’s Fry-day!”. A Florida State Trooper told a local news reporter, “I felt no compassion for Bundy whatsoever. He had an easier death than any of his victims.”

One reporter Tim Swarens recalls of the day, “Nothing prepared me for what I encountered in a field outside the prison. A chorus of booming cheers immediately rose from hundreds of bystanders who had gathered around the media camp across the road. Minutes after watching a person die, we stepped into a party. The crowd was laughing, cheering, eating, and drinking.”

2Last Request of a Serial Killer 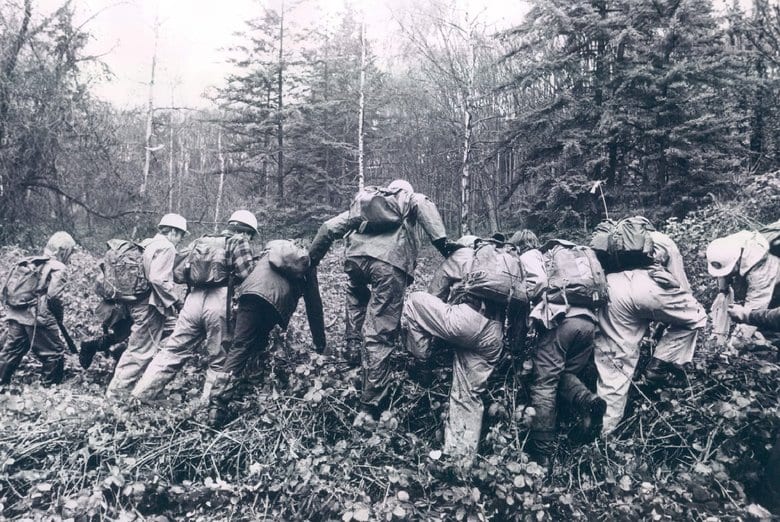 Bundy did not have a funeral. Sandy Williams, co-owner of the Williams-Thomas Funeral Home in Gainesville where Bundy’s body was cremated, stated, “There will be no public funeral as of right now. We do not believe there will be a public funeral in the future.” His last possessions in prison included a radio with headphones, a gold chain with a cross, a bible, stationery, a gold wedding band, and a bottle of suntan lotion. He also had $709.66 in cash, which was donated to the prison canteen.

Bundy had one last dying wish—that was for his cremated remains to be scattered in the Cascade Mountains of Washington State. The request was granted; however, it did come with a sinister twist. The Cascade Mountains is where Bundy dumped four of his victims—21-year-old Lynda Ann Healy, 19-year-old Donna Gail Manson, 22-year-old Roberta Kathleen Parks, and 22-year-old Brenda Carol Ball.

1 He Is Survived by His Daughter, Rose Bundy 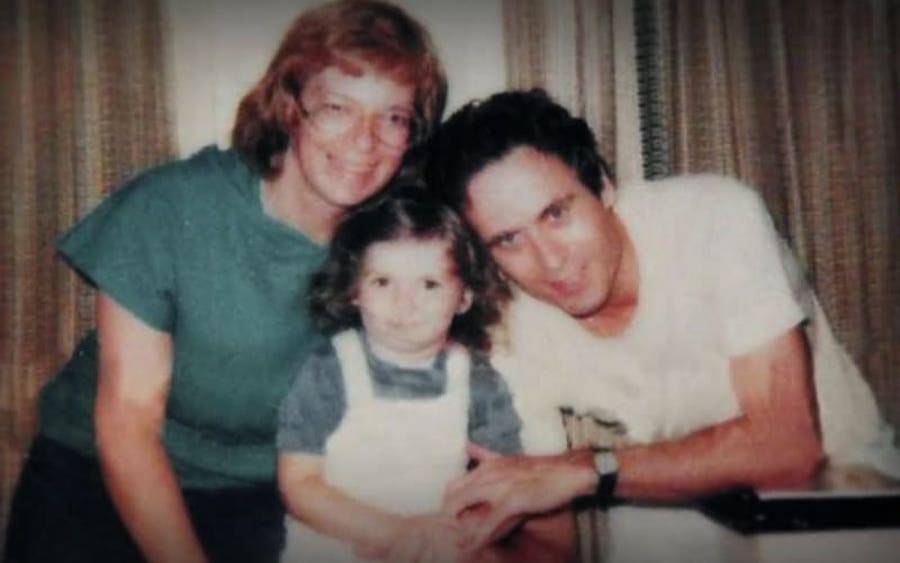 During his Florida murder trial, Bundy had the full support of his girlfriend—Carole Anne Boone. It was the right woman Bundy needed by his side as Boone always believed in Bundy’s innocence. She said, “Let me put it this way, I don’t think that Ted belongs in jail. I don’t think they had reason to charge Ted Bundy with murder.”

Bundy found a legal loophole that read: “(In Florida) a public declaration, properly phrased, in an open courtroom in the presence of court officers would make (a marriage) ceremony legal.” He then declared in the courtroom that he was married to Boone, and the two were wed.

The couple managed to have sex whilst he was incarcerated—it is strongly believed that Bundy bribed the guards. Boone then fell pregnant and gave birth to a daughter they named Rose Bundy. In 1986, Boone divorced Bundy; since then, Boone’s whereabouts and their daughter are still unknown.

For more lists like this, check out 10 Most Disturbing Moments During Ted Bundy’s Trials, and Top 10 American Serial Killers.