Alcohol, as Homer Simpson famously said, is the cause of and solution to all of man’s problems. Humans have been quaffing back alcohol for thousands of years. It may even be at the root of civilisation – farming may have developed to provide the ingredients for brewing. Now the market for alcoholic drinks is more saturated than an alcoholic’s liver. To sell drinks need to stand out. Here are ten of the oddest alcoholic beverages available.

10The World’s Most Expensive Beer 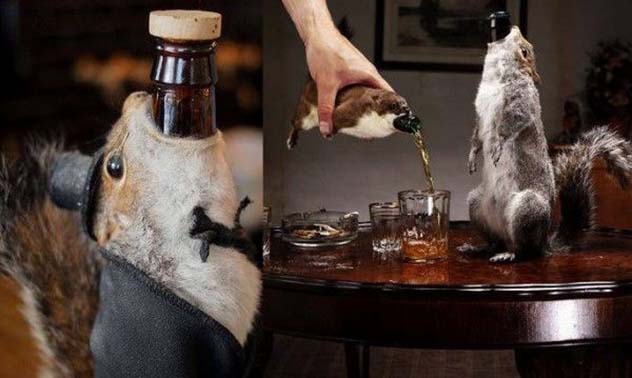 Brewdog is Scottish craft brewery that has a history of pushing the envelope of beers. In 2010 they produced a 55% alcohol beer called The End Of History. They had produced high alcohol beers before but this was the pinnacle of their research, hence the name. Not designed for swilling down by the pint it was suggested that buyers sip it in small amounts. At a price of £500-700 you would want to get the most out of it.

The range of prices is due to the unusual container for the bottle. Only 12 were made in the initial run and each was served in a bottle contained within either a squirrel or a stoat. The price of the bottle depended on the size of the stuffed animal which it came in. Those who missed out on the first batch were later able to pick up a bottle if they joined in a round of crowd-funding the brewery. Those who put up over $20,000 received a free bottle of End of History, still presented in a dead animal.[1] 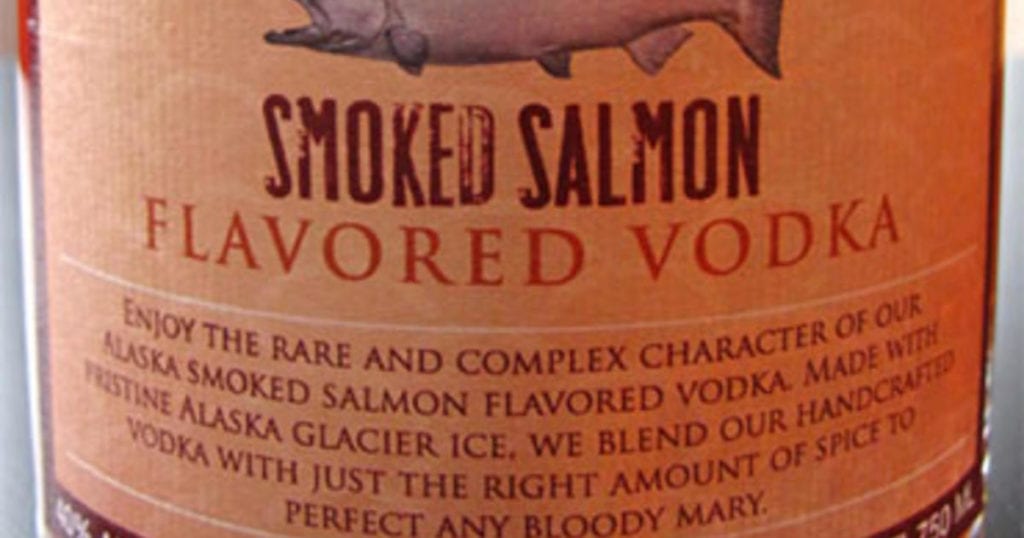 The joy of vodka is that it serves its function well; it gets you good and drunk. The shame is that it generally tastes of nothing but the searing sensation of alcohol. People have therefore done their best to disguise this by adding their own flavours to vodka. Some are simple fruit flavours but others are more unusual. Those with a sweet tooth will be able to find marshmallow, salted caramel, popcorn, or pretty much any sugary confection. Those looking for a savoury vodka will no doubt find their palates catered to too, no matter what they are craving.

The Alaska Distillery makes a vodka which has been incorporated into what has been called Alaska’s Signature Cocktail. They produce a Smoked Salmon flavour vodka which they say goes brilliantly with a Bloody Mary. Made with water from glacial ice they infuse the salmon into their vodka leaving it a mellow pink colour.

Another potential add to your Bloody Mary is bacon flavoured vodka. Bakon Vodka spent two years perfecting the flavour they add to their bacon vodka. For some reason. They must really have believed it would work.[2] 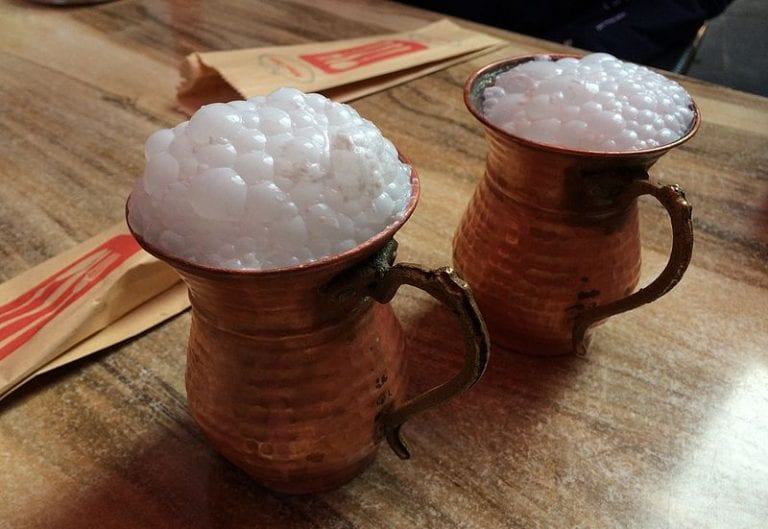 For most of history drinking water has been a risky proposition. Contamination with human and animal waste made water a perfect way of contracting deadly diseases. Fermentation, and the alcohol it produces, was one of the best ways of killing bacteria. In the Asian steppes nomadic tribes produced a mildly alcoholic beverage from the mares which they rode.

Kumis, also known as Airag, is a Mongolian fermented mare’s milk. The milk is gathered in a large leather sack and mixed repeatedly for two days. This introduces oxygen into the milk and allows yeast and bacteria to grow. They convert some of the lactic acid to alcohol making the mixture about 2% alcohol. Their metabolism also produces carbon dioxide which slightly carbonates the milk. Another reason to ferment mare’s milk before drinking it is that the raw milk has a powerful laxative effect on humans.

Those looking for a more potent brew can try Arkhi. This is a distillation of Airag that brings it up to around 10% alcohol. The results of this process apparently have either a slightly rancid taste or goaty flavour, depending on the quality of the Arkhi.[3] 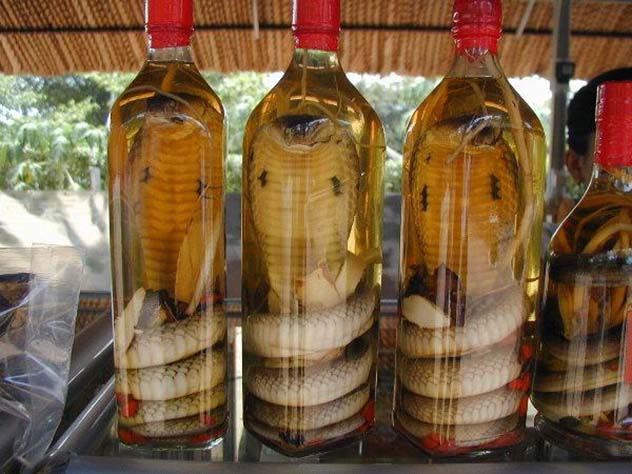 Snake wine is just what it sounds like. Snakes, often venomous cobras, are placed in bottles with rice wine and left to marinade in the mix. The resulting snake wine is said to have health benefits from the venom dissolving in the alcohol according to practitioners of traditional Chinese medicine. Snake wine can be found throughout China and Southeast Asia.

To make the wine more palatable, or more medicinal, other items can be added to the mixture. Berries, herbs, spices, and geckos can all find their way into a bottle of snake wine. Tourists can buy bottles full of these to take home but the drink is mostly served in shot glasses free of any macabre body parts.

Often the snakes are forced into the bottles alive and drowned in rice wine. This unpleasant practice is not always effective. There have been reports of snakes surviving the process for months by entering a hibernation state, only to spring to life and bite the drinker.[4] 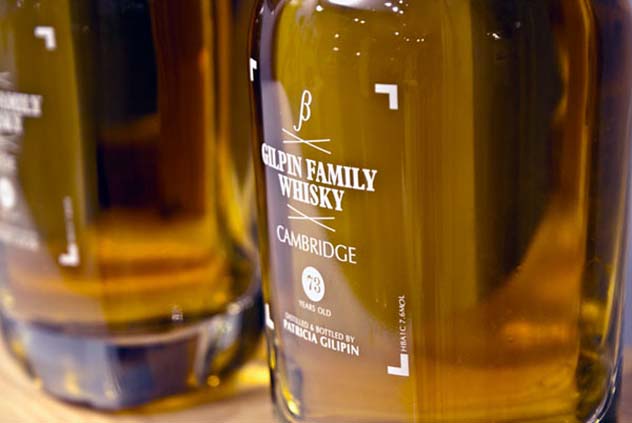 James Gilpin has turned his knowledge of the human body’s chemistry into an unusual alcoholic drink. He decided to raise awareness of diabetes by working with a natural by-product of Type II diabetes. Type II diabetics are unable to regulate the amount of sugar in their blood and so often have high blood sugar. This gets excreted in their urine. Gilpin took urine from elderly people with diabetes and turned it into a single malt whisky.

All fermentation is essentially the same in that sugar is converted to alcohol by yeasts. Gilpin filters the urine to remove the sugar and then uses that sugar to drive the fermentation process. Gilpin’s own grandmother has provided some of the raw materials for his project.

Unfortunately(?) the whisky will not be widely available but will serve to raise questions about whether we should be harvesting resources that would otherwise be flushed away.[5] 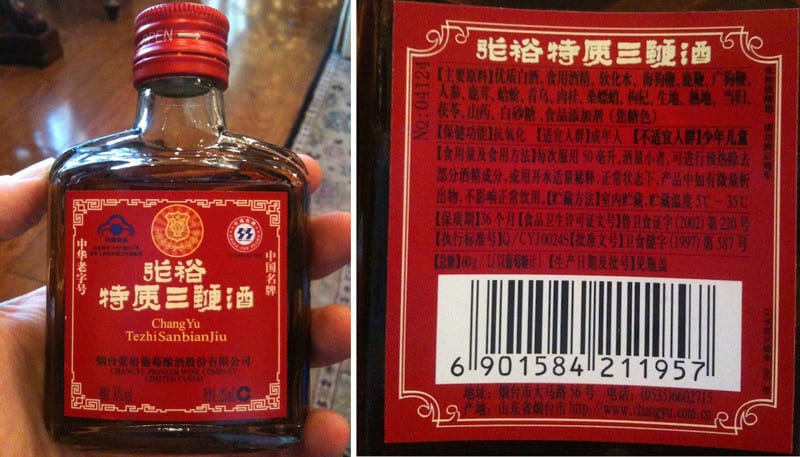 Traditional Chinese medicine strikes again. Alcohol is a good solvent for those molecules which do not dissolve well in water. Using alcohol then to extract efficacious chemicals is not so silly. In China to give men back their potency they go straight to the source. In traditional pharmacies you can buy wine which has had penises steeped in it. One particular wine ups the ante by containing the power of three penises at once.

Tezhi Sanbian Jiu is a rice wine that to the unobservant would look much like any other. Its name however translates to Three Penis Liquor. Those willing to try it will get the supposed benefits of deer, seal, and dog penis in their shot glass. Unsurprisingly it is mostly men who seek the help of Three Penis Liquor. The drink is also said to have the power to heal the kidneys. Perhaps the makers have missed a marketing opportunity there to market it to women with kidney issues.[6] 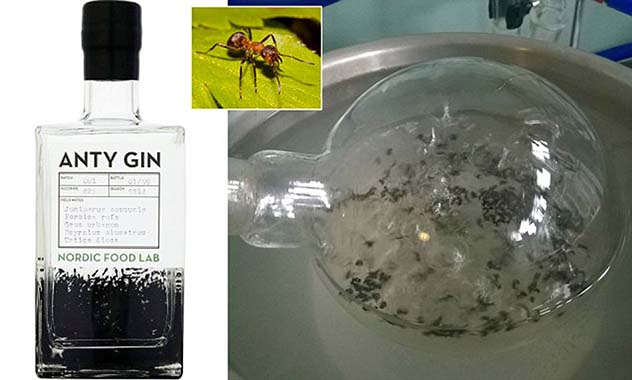 Nordic cuisine has undergone a renaissance in recent years. Noma in Copenhagen has been ranked the world’s best restaurant four times. Unafraid to be original, when Noma visited London they presented a dish which consisted of cabbage leaves and live ants.

The head chef of Noma, Rene Redzepi, has set up Nordic Food Lab, a non-profit organisation which investigates “food diversity and deliciousness.” Working with a gin distillery they have brought the flavour of ants to the masses. Each bottle of Anty Gin contains the essence of 62 wood ants which have been hand foraged. The ants were chosen for Noma’s menu and this gin because when under attack they produce a spray of chemicals to fend off predators. Many of these chemicals have aromas which the creators of this gin say add to the flavour.

Those wishing to try this heady mixture of insect excretions will need to pay £200 for a bottle.[7] 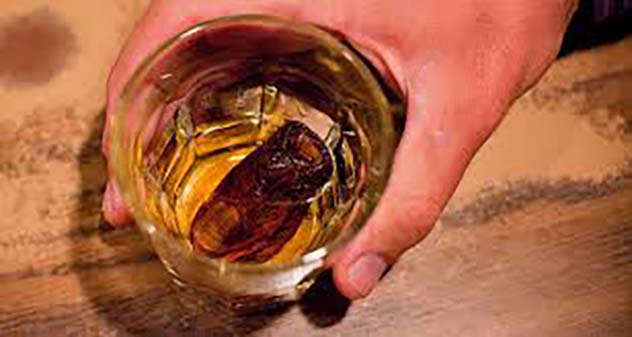 The Downtown Hotel in Dawson City, Canada, offers patrons a unique opportunity. All you have to do is order a shot of spirit and pledge the Sourtoe oath. Then the bar will take your shot and place a real human toe into the glass. Then you take your shot and become a member of the Sourtoe Club. The club has only one rule “You can drink it fast, you can drink it slow, but your lips have gotta touch the toe.”

The legend of the toe is that it belonged to a booze runner during prohibition. Caught in a blizzard the runner developed gangrene in his toe which he hacked off with an axe and preserved in rum. Decades later the preserved toe was supposedly found. Quite how the decision was made to turn it into a cocktail is lost to history.

The current toe used in the cocktail is not that original one. Several toes have been accidentally swallowed by those taking the Sourtoe challenge. In 2013 one patron swallowed the toe on purpose, willingly paying the $500 fine for the loss of the key ingredient. Those who swallow the toe now will be hit with a $2500 charge. Luckily the hotel has managed to get other toes donated to it.[8] 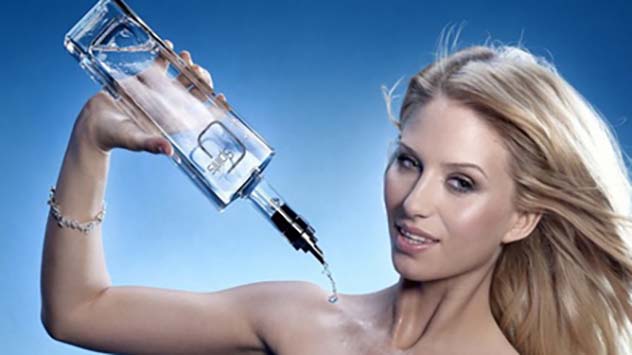 There is a certain type of person who will pay for any sort of contact with an attractive woman. For those wanting a little human contact in their spirits a German company has just the product. G Spirits sells bottles of alcohol that have been poured over a model’s breasts.

Buyers can get whisky, rum, and vodka which has had the G Spirit treatment. Each bottle comes with a certificate signed by the model that swears the alcohol has been run over their flesh. They will also receive a photograph of the model mid-soaking. The makers have created a glass basin to catch the alcohol and offers videos of the process. For around $200 the owners of G Spirits promise a first rate product and the “eroticism of a beautiful woman.” Whether this translates into a better flavour awaits a blind taste test.[9] 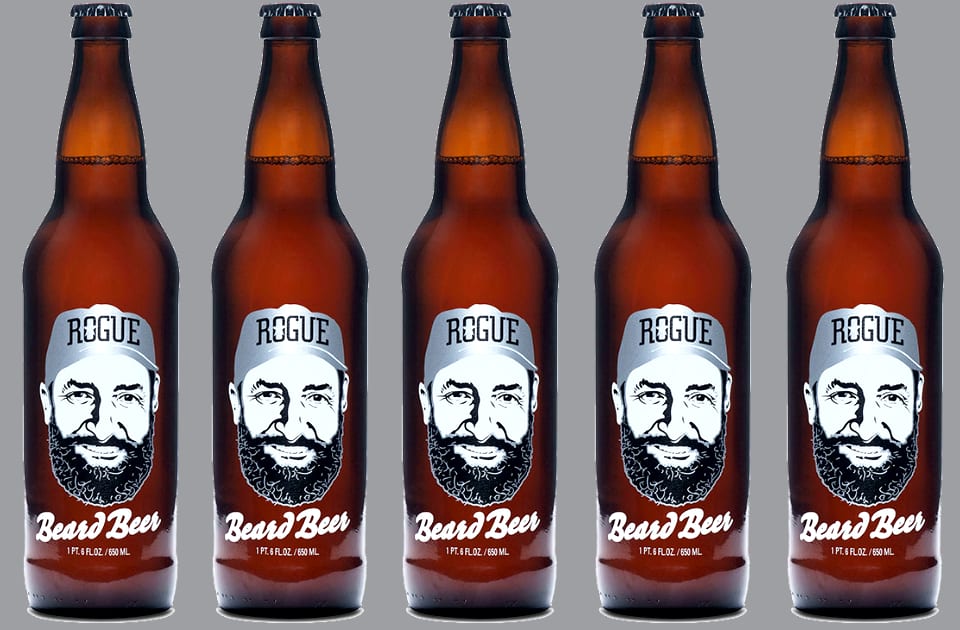 Yeast is everywhere. If you are alive as you read this you have yeast all over you and inside you. Most of the time they do no harm and are actually vital parts of the ecology that exists on us. But as we have seen yeast are also a key part of brewery, they do the actual work of making alcohol. It seems that people have put these two facts together and are using yeast sourced from humans to make their drinks.

John Maier is the chief brewer at Rogue Brewery. When they wanted to develop a new strain of yeast for their beers they searched in all the usual places. Then someone joked that his beard, not shaved since 1978, might be playing host to some interesting yeasts. Taking 9 hairs they cultivated a yeast that was ideal for beer making that had been lurking in Maier’s beard. The yeast was probably a mix of a wild yeast strain and one normally used in the brewery. The beer was released in 2014 as Rogue Beard Beer.

In 2016 a crowd-funding page emerged for a Polish company looking to brew a beer using yeast sourced from a model’s private parts. Because yeast used in brewery is a different strain to that usually found in humans it seems unlikely to succeed. I’m sure it won’t stop people trying however.[10]