The ‘Storm Area 51, They Can’t Stop All Of Us’ call to action that was issued in September, 2019, fizzled out.[1] So what happens in Area 51 stays in Area 51. But the government-labeled tin-foil hat brigade, which claims that aliens and their spaceships are hidden there, doesn’t seem so crazy anymore. About a week before the call to action, the United States Navy finally acknowledged that UFOs exist. After decades of denial, the Navy publicly stated that there are, indeed, ‘Unidentified Aerial Phenomena.’[2] Regardless of what they are called, the strange flying objects that Americans spot in the skies aren’t weather balloons and secret military aircraft, as they have been told.

It took the government almost as long to admit that there actually is a place called ‘Area 51.’ A Freedom of Information Act Request revealed its existence to the public in 2013. Officially, planes are tested and constructed at Area 51.[3] The facility is actually called the Nevada Test and Training Range at Groom Lake, one of two military training areas at the Nellis Air Force Base Complex in Nevada.[4] The remote desert site, about a two-hour drive from Las Vegas, is close to the UFO-themed tourist towns of Rachel and Hiko. Whistleblowers and witnesses continue to come forward about what is really going on at Area 51 and other military installations.

Malmstrom Air Force Base, which deploys Minuteman III intercontinental ballistic missiles, (ICBMs) is adjacent to Great Falls, Montana. In 1967, the Missile Combat Crew received reports from security patrols and maintenance crew that a UFO was hovering over one of the missile silos. Shortly thereafter, each of the ten missiles shut down, one at a time.[5] While declassified documents prove that the nuclear weapons did, indeed, become inoperable, there is scant evidence of the UFO claim.[6][7] However, evidence was gathered at an earlier UFO sighting. The Mariana UFO Incident took place in Great Falls in 1950. Nick Mariana, manager of a minor league baseball team, may be the first person to intentionally capture footage of UFOs. A bright flash caught Mariana’s attention as he was inspecting a baseball field. He ran to get a 16mm camera when he saw two silver disks flying at lightening speed over the city. He was able to get 16 seconds of color video footage. However, he later claimed that 35 complete frames were missing after the Air Force examined the film and returned it to him. These frames showed that the mystery objects in the sky were discs that were rotating.[8]

The 1947 Roswell Incident in New Mexico is perhaps the most famous UFO encounter. The first press release stated that a flying saucer had been found. The second press release claimed the object was a weather balloon.[9] Operations officer Robert Shirkey saw an aluminum-like material with characters written on it being loaded for a flight to Carswell Air Force Base in Fort Worth, Texas.[10] Flight crewman Robert Porter reported that the boxes holding the ‘pieces of flying saucer’ were as light as empty boxes.[11] In later years, UFOs were seen around the base. In 1954, a T-shaped aircraft was spotted and picked up on radar. The blue, green, and white UFO hovered at 4000 feet over the nearby airport.[12] Another sighting was recorded by the Mutual UFO Network (MUFON) witness reporting database. In 1965, a witness saw a triangular UFO with three lights.[13] 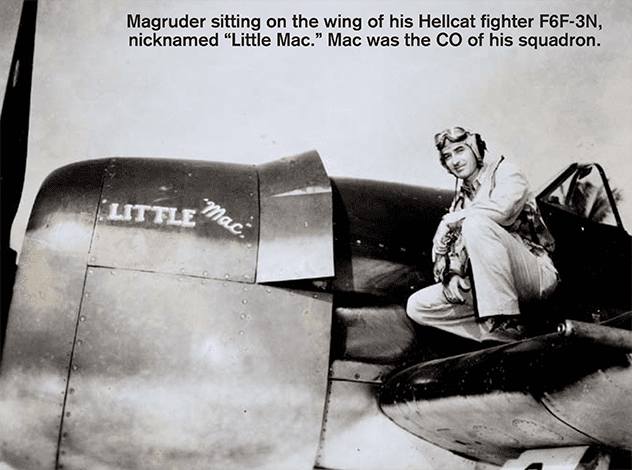 Captain Oliver W. “Pappy” Henderson, a senior pilot at Roswell AFB during the Roswell Incident, flew a plane to Wright-Patterson Air Force Base in Ohio shortly after the incident. He did not discuss the flight for more than thirty years because of his security clearance. But in 1977, he told his business partner about his assignment. He said he transported spacecraft wreckage and small alien bodies. He showed his partner a piece of metal from the wreckage. It resembled aluminum but was lighter and much stiffer. In 1982, Henderson told the same story to several of his Roswell pals while attending a reunion.[14] Other military men confirm Henderson’s story. One of these men is Marine Lieutenant Colonel Marion M. “Black Mac” Magruder. On his deathbed, Magruder remembered that the alien he saw was ‘squiggly.’[15] 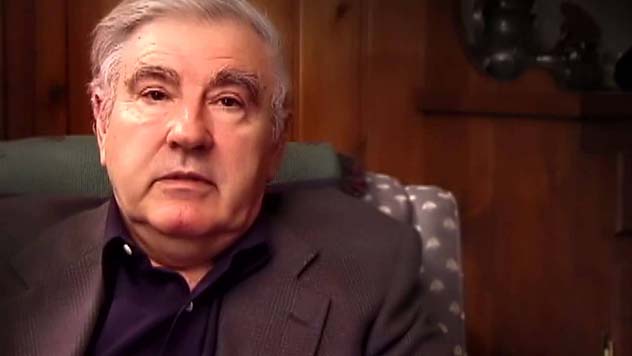 Major George Filer recounts six decades of investigating aliens and UFOs in John Guerra’s Strange Craft: The True Story of An Air Force Intelligence Officer’s Life with UFOs. Most notably, Filer recalls the shooting of an alien at Fort Dix in New Jersey.[16] In 1978, a military policeman was following a low flying aircraft through the wilderness of the army base during the wee hours of a frigid January morning. A 4-foot tall, grayish-brown creature with long arms, a slender body, and fat head appeared in front of the MP’s truck and was then shot. The remains gave off an ammonia-like stench.[17] Filer is a member of the Disclosure Project, which champions the release of all UFO information. In 2017, the Pentagon released footage of an extraterrestrial vehicle outdoing U.S. Navy fighters, confirming some of Filer’s descriptions.

29 Palms in the Mojave Desert in California was the site of a massive multi-regimental live-maneuver exercise in October, 2019.[18] Military training is just one of the interesting activities at the Marine base, which is listed in Project Redbook. This database contains information about subsurface alien activity sites. It was compiled for those who want to explore the sites, with no claims of authenticity for any particular site.[19] According to researcher Val Valerian, recovered alien technology is examined in underground facilities at the base.[20] In addition, there have been many UFO sightings in the area since the 1950s.[21] In May, 2019, a worm-like UFO was spotted over the town of 29 Palms.

In his book, Above Black: Project Preserve Destiny, Dan Sherman writes that he was sent to Fort Meade in Maryland to train for his role in an above Top Secret-level Air Force program called ‘Greys.’ In 1992, he was recruited to speak to Grey Aliens, first encountered at the Roswell Incident. His mother was visited by aliens and was the subject of genetic manipulation. Therefore, Sherman could fulfill his duties as ‘Intuitive Communicator,’ and receive messages from the Greys. First, Sherman sat in a communications van in an unknown location to receive the messages from the designated alien. After some time, he began to receive what he calls ‘abduction data.’[22] The National Security Agency, (NSA) headquartered at Fort Meade, declassified many documents in more recent years. Some of these reports note attempts to decode a ‘radio message’ received from outer space.[23] 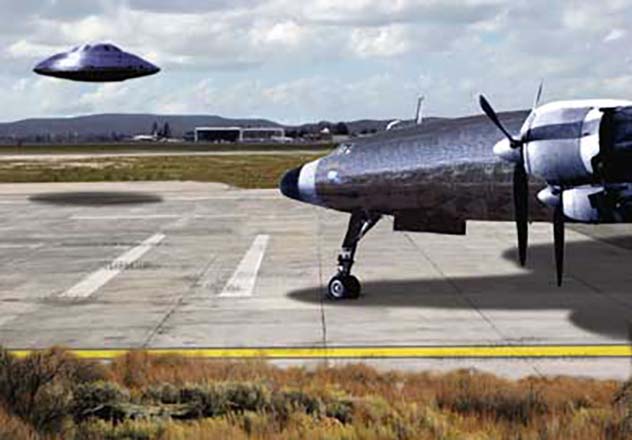 Skeptics wonder why aliens speak to the ‘common man’ rather than leaders. In fact, one of our greatest leaders, Dwight Eisenhower, may have communicated with them. Depending on whose story you believe, the president either took a secret evening trip to Edwards Air Force Base while on a golf vacation or he went to the dentist for repair of a chipped tooth. Ike’s dentist insisted he saw the president on February 20, 1954. But Dr. Michael Salla believes that Ike met two blue-eyed aliens, who had colorless lips and white hair, at the base.[24] Dr. Salla is a leader in the field of exopolitics, defined as ‘the political study of the key actors, institutions, and processes associated with extraterrestrial life.’[25] Interestingly, the Associated Press reported that Ike died on February 20, 1954, but retracted the story two minutes later. Laura Magdalene Eisenhower, Ike’s great-granddaughter, has publicly stated that she believes that Ike met with extraterrestrials.[26] 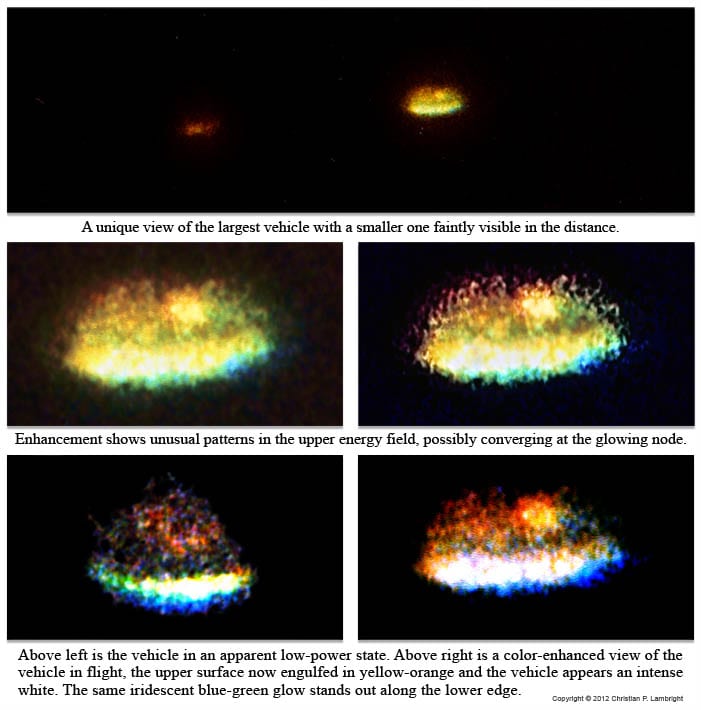 A declassified government report revealed that guards at Kirtland Air Force Base in New Mexico saw UFOs in the Coyote Canyon area in 1980. During the same period of time, radar was jammed by an unknown source for six hours in the same area.[27] Paul Bennewitz, a physicist, inventor, and UFO researcher, had begun to see odd lights in the sky a year earlier. These lights, which flew towards Coyote Canyon and the base, could be seen nearly every evening. Bennewitz filmed the lights as well as objects he saw on the ground and in the air. Over time, he collected more than 2600 feet of film. Bennewitz also taped low-frequency radio transmissions that he said were transmitted by the aliens, and he created a computer program to translate these transmissions.[28] In addition, he claimed to have evidence that aliens were controlling people through electromagnetic devices.[29] 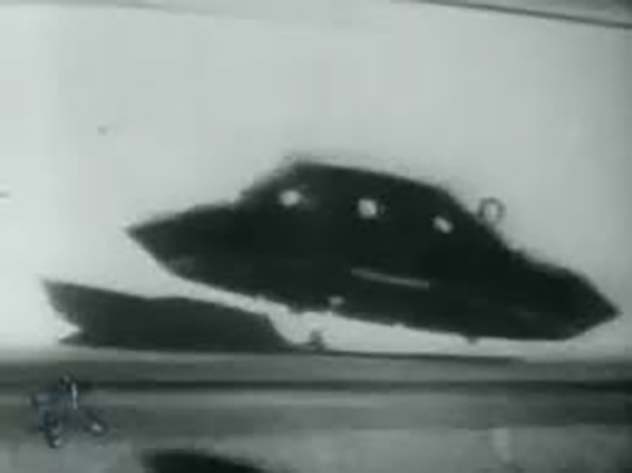 Holloman Air Force Base in New Mexico is at the center of several UFO encounters. Project 1947, an ongoing gathering of articles and documents about UFOs seen between 1900 and 1965, presents one of these incidents.[30] In 1950, electronics engineer Cliff Booth reported that he and another man had used an Askania theodolite to get photographs of a cigar-shaped UFO. While both men were convinced they had seen a ‘vehicle from outer space,’ photographs were blurry.[31] Years later, filmmaker Robert Emenegger was prompted by the US Air Force to produce a UFO documentary. In 1974, UFOs: Past, Present and Future was released without its most sensational story. The Air Force reneged on its promise to give Emenegger footage of a UFO landing at Holloman Air Force Base in 1971.[32] The footage showed three UFOs. One UFO landed and three aliens emerged.[33]

‘Georgia’s Aerial Phenomenon 1947-1987,’ written by Roswell, Georgia, police officer Michael Hitt, presents 234 UFO sightings in the state. Many reports come from civilian and military pilots like the airmen from Dobbins Air Force Base who told their story in 1952. They saw an object streak overhead before it disappeared. This same object was seen on radar scopes as it traveled at 1,200 miles an hour, twice the speed of an airplane.[34] Control tower operator Bruce Beach relates that there were so many UFO sightings at Dobbins Air Force Base in the 1950s that the tower had a 3D camera, which was unusual at that time.[35] Sightings continued throughout the years. Recently, a square, black UFO the size of a Boeing 727 was spotted near the base and reported to MUFON in January, 2019.[36]

The spaceship-shaped McDonald’s in Roswell, New Mexico, reminds residents and tourists that we may not be alone in the universe. Right now, the majority of the evidence comes in the form of stories told by military men, pilots, law enforcement officers, and others. The government has finally admitted that UFOs are a real phenomenon. Who knows what secrets may be revealed in the future.