People everywhere are searching through their piles of old clothes for fabric to make face masks and this is prompting many to actually think about the clothing industry for the first time. Is our reliance on cheap and disposable clothes harming the planet? Are we exploiting people living in virtual slavery to save a few bucks on a t-shirt?

Well designers, artists, and businesses are always ready to innovate and so here are ten of the strangest sources of fabric you may, or may not, be wearing in the future.

How was it made? Golden spider silk

Silk is the ultimate luxury fabric. Since antiquity it has been traded across continents to those who crave its light and slinky touch against their skin. The Roman philosopher Seneca thought there was very little between wearing silk and wearing nothing at all – so fine was the silk reaching Rome from China. Yet few consider where their silk is coming from. A person wearing silk is wearing cloth spun by caterpillars. Insects rarely get the credit they deserve from the fashion industry.

But caterpillars are not the only source for silk. Spider webs are amazing structures not just for the complexity of their design because of the silk they are made from. Stretchy and strong it is perfect for catching prey but also makes its an ideal fibre to make fabric from – if only you can get enough.

In Madagascar people have taken the time to capture Golden Orb Weaver Spiders and extract their silk. To make a cape from their silk around 1m square it took a team eight years to capture female spiders from the wild and slowly draw their silk out. 1.2 million spiders were needed to make the cape so don’t expect to be wearing this material any time soon. But it is a lovely golden colour though. 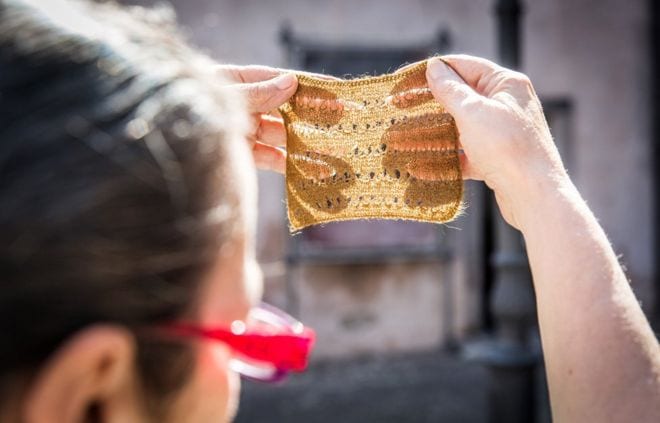 If the idea of wearing spider silk freaks you out but you still want that silky, and exclusive, feel by not try Byssus? This fabric, also known as sea silk, was once among the most expensive fabrics known. Today only one person keeps the tradition alive by diving in search of rare clams that make it.[1]

Pinna nobilis is a large mollusc that can grow up to a metre long. To keep its bulky shell anchored to the seabed the clams spin strong fibres from protein. These are only around 6cm long but that is enough, if you are skilled, to turn into cloth.

In the ancient world sea silk, found only in the Mediterranean, was traded as far away as China. The rarity of the clams and the difficulty in harvesting them made sea silk wildly expensive. While once the wealthy may have bought trousers, coats, or cloaks made from the naturally golden thread today only miniscule amounts are produced.

Suzanne Lee of BioCouture explains how to make clothes from bacteria

If you are worried about wearing fabrics derived from animals then Biocouture could be the fashion brand for you. Started by Suzanne Lee the range of clothes relies on organisms like bacteria and fungi to grow their fabric for them. And if you worry about the disposable nature of modern fashion then you should know that these clothes can simply be thrown on the compost heap after you are done with them.

By putting bacterial cultures in a complex set up – a bath tub – and feeding them a complex diet – green tea – Biocouture makes what is described as being like a plant leather. Dried, coloured, and shaped the clothes look much like any other leather product.

This is not the end goal though for Biocouture. In the future they are looking to make clothes from microorganisms that are still alive. Wearing your clothes would be good for them as they would be feeding off your bodily secretions. 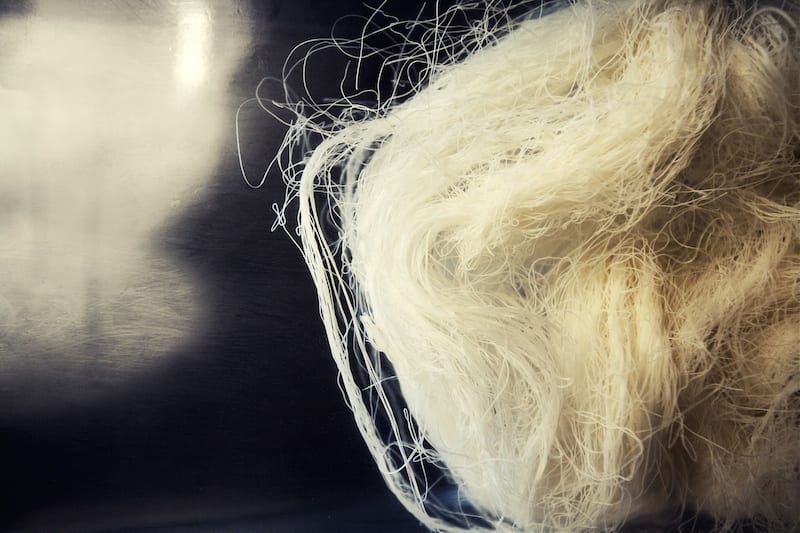 Silk gains much of its value from the scarcity of the raw materials it is made from. For one entrepreneur however there is a silk substitute made from a material no further away than your fridge. Qmilch uses proteins found in cows’ milk to spin a fine thread that behaves almost exactly like its pricier rival.[2]

Milk fabric has been created before and milk cotton was popular for a time in the 1930s but tended to be mixed with acrylonitrile to strengthen the fibres made from milk casein. Other artificial fabrics were invented however that struck consumers as less milky. Qmilch does away with these synthetic additions and claims to be more ecologically friendly. Around a gallon and a half (6 litres) of milk is apparently enough to make a whole dress from Qmilch. 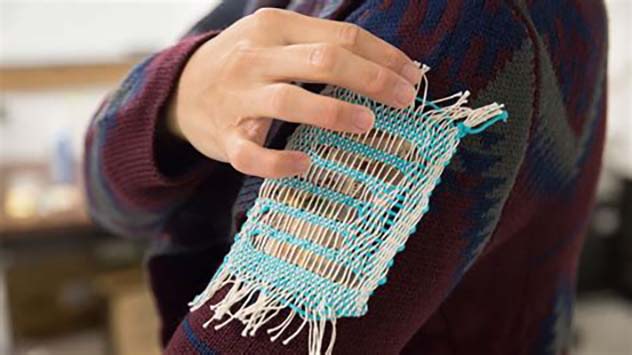 Have you ever had your phone run out of power because you left your phone at home? That could be a problem of the past if clothes designers start to incorporate solar power generators into their work.

There already are some items of clothing available that feature solar panels as a way to charge phones and other electronics. Mostly these are rigid panels that can be covered or uncovered by the wearer to gather up solar energy.[3] Unfortunately solar panels are still not the most attractive objects, they are bulky, and they have to be aligned to the sun to reach optimal efficiency.

In the future however it may be possible to weave clothing out of fibres that are themselves able to capture energy from sunlight. The clothes would capture light from whatever angle and could charge themselves throughout the day. Before such clothes become common however several major breakthroughs in solar panel design will be needed. Perhaps the most plausible way to incorporate solar panels into clothing is to make them small and produce a fabric covered in scales of miniature panels. 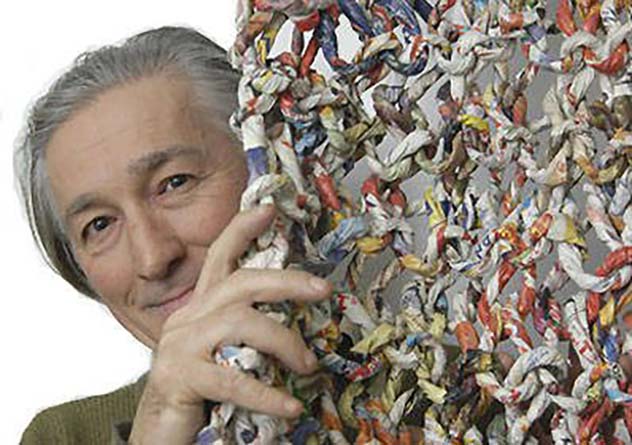 Not everything in fashion has to be high-tech however. Sometimes the best thing you can do for the environment is simply to recycle old clothes, or other things. Newspapers for instance?

In the dark days of the Great Depression people used to stuff their clothes with newspaper for better warmth in the winter. Now you can pay Italian artist Ivano Vitali to craft old papers into couture garments. Since the 1990s Vitali has created clothes and artworks almost exclusively from discarded newspapers.

To make his threads the artist tears papers into strips and sorts them by colour before pasting them together. This use of their natural colour avoids the need for additional dyes. By simply twisting the paper it is possible to create a rather chunky thread from it that can be knitted into any shape you want.[4] 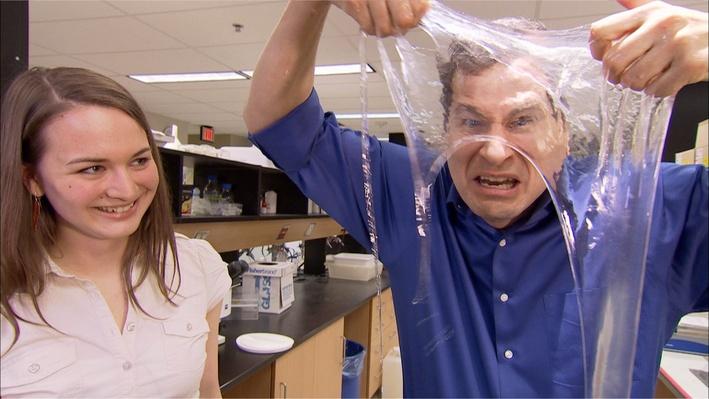 Hagfish are somewhat unlovely looking creatures with a somewhat unlucky body problem. When some people get stressed they sweat a lot, but when a hagfish is stressed it produces a thick ooze of slime. This slime is so thick and effective at blocking an attackers gills that even predators as voracious as sharks back away from the litres of goo that a single hagfish can make. When a truck carrying hagfish in Oregon crashed the road was buried under a layer of their slime.

Scientists however are fascinated by how the hagfish can create so much from so little. A tiny amount of mucus released into water balloons into a vast amount of slime. Others looked at this slime and thought “Fashion.”

By pulling on the slime and spinning it a fine thread similar to silk can be made.[5] At the moment only miniscule amounts of this hagfish silk have been produced but it may one day be possible to implant the genes responsible for the slime into bacteria which would allow it to be harvested with ease. Though hagfish may need a change of name before Hagfish clothing is launched worldwide. 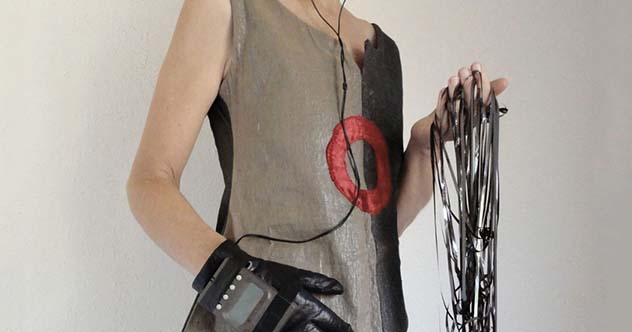 Show a young person a music tape and they may not believe that those clunky lumps of plastic were once the only way to listen to your favourite band. Billions of tapes were made in their time and most of them will have ended up in landfill sites. With Sonic Fabrics however your old tapes can get another hearing.

Sonic Fabrics are the brainchild of artist and designer Alyce Santoro who takes the tape out of old cassettes and mixes them with polyester fibres before making clothes out of them.[6] The material produced feels like denim but has not entirely lost its musical roots.

By taking a cassette player that has been modified and running it over the fabric the music held in the old tape comes to life and you can hear what was recorded on them. Sort off. Because the tapes are interwoven the effect is described as “like scratching five records backwards at once.”

Pineapples are tasty but are also a source of clothing. In the Philippines where large pineapple plantations grow clothes made from pineapple were once highly sought after by the local elites.[7] While the pineapple fruits were destined for tables around the world the long and stringy leaves were taken away and scraped to produce long white fibres. After a labour intensive process these fibres were sorted into those suitable for making strong and rugged cloth and the finer sort used to make Piña fabric. This could be woven into sumptuous garments. Piña is undergoing a resurgence at the moment as it is environmentally friendly and made from a farming by-product.

Another way of using pineapple leaves has been developed that turns them into an alternative to animal leather. Pinatex is made by taking pineapple fibres and mixing them with an acid derived from corn. This creates a mesh of fibres that is processed until it looks and acts very like a traditional leather. Fashion designers around the world are now proud to say their models are dressed in the finest pineapple.

Sustainability is the watchword for many businesses these days but some people just crave exclusivity in their fashion that cannot be bought in every shop. For those with discerning taste, a fat wallet, and a chilly head what could be a finer acquisition than a cap made from woolly mammoth fur?[8]

In the tundra of Siberia there are thousands of woolly mammoth skeletons that are dug out of the permafrost every year. These bones are sold to museums and collectors but sometimes it is not just the hard bones that are recovered. Sometimes the cold preserved everything from the organs inside to the shaggy hair that gave the mammoths their names.

Despite having gone extinct thousands of years ago you can still buy clothes made from genuine mammoth. Vladimir Ammosov was given a bag of mammoth hair by his uncle and commissioned a weaver to turn it into a hat. While it has a unique provenance the hat may not be the most comfortable one you ever wear – it was described as being very prickly and “like a massage.”

10 Sex Toys That Would Scare Your Grandma