Most UFO sightings are witnessed by only one person, which makes it harder to convince others that the sighting was not just a figment of someone’s imagination. However, some encounters take place in front of multiple witnesses—and this changes things entirely.

Even if these events are not alien in nature, the fact that so many people witnessed these incidents at the same time means that “something” took place. Perhaps more importantly, this suggests that these episodes are not purely the products of the imagination.

With Fourth of July celebrations fast approaching in late June 1983, part of the evening sky over New York’s Hudson Valley was awash with fireworks. This was the result of early Independence Day celebrators. Out of the mini explosions of color suddenly came a low humming sound that brought with it a huge disc-shaped craft “about the width of 16 or 17 houses!”

As it hovered over the witnesses, the strange humming ceased and the craft simply hung in the air in chilling silence. Several minutes after the UFO first appeared, the humming began again and the disc shot off at great speed.

This was just one of many UFO sightings in Hudson Valley in the early 1980s. But it was not the only one to have multiple witnesses to the event.

On March 24, 1983, there were so many reports of a sighting of a strange craft and weird lights in the sky of Yorktown that the town’s switchboard almost went into meltdown. That evening, the Taconic parkway became gridlocked with vehicles that had stopped suddenly. Their mesmerized drivers now stood beside their cars staring up at the assumed UFO passing over them.[1] 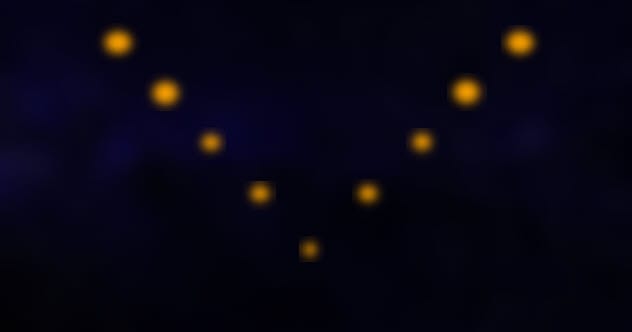 On the evening of July 14 and into the morning of July 15 in 2001, at least 15 people witnessed strange golden-orange lights over the Arthur Kill River at the New Jersey Turnpike. They appeared to be in a V-formation. However, it wasn’t clear from the many accounts if the lights were separate entities or if they belonged to one large V-shaped craft.

Others reported that the lights were in a more “scattered” formation and simply disappeared into the night sky one by one. Newark Airport was contacted, but they hadn’t detected anything abnormal on their radar. According to the National Weather Service, there was no unusual weather that evening, either.

Witness Veronica Bagley managed to capture the lights on video. Meanwhile, another witness, Patty Ercallino, stated that the whole incident was “very peaceful, very serene, and very beautiful.” She even believed that they had observed “some type of miracle!”[2] 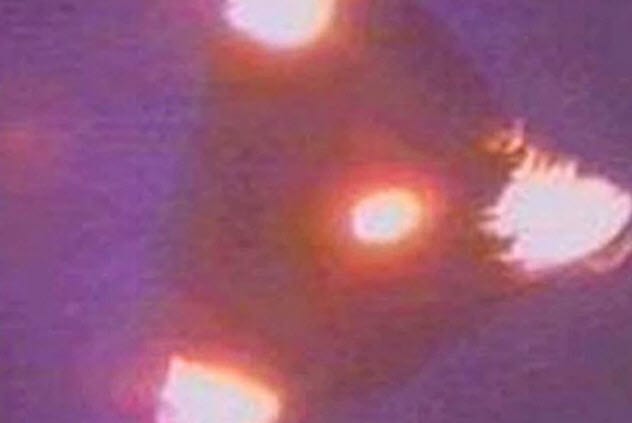 According to UFO expert Nick Pope, over 100 people reported seeing a UFO on the evening of March 30 and into the early hours of March 31, 1993, over the west of England. What’s more, many observers were active police and military personnel. Pope worked on the case personally as was his remit during the time he spent with the British Ministry of Defense.

Most sightings described triangular craft that moved through the night sky at a blistering pace. One particular witness—a policeman—was with a group of scouts on the Quantock Hills in Somerset. They described the objects as “like two Concordes flying side by side and joined together!”[3]

There were more reported sightings in Cornwall, Devon, and West Midlands as well as over two RAF bases in Shropshire—RAF Shawbury and RAF Cosford. Neither base managed to pick up the mysterious craft on radar. At the time, Pope described this in his report as being of “considerable defense significance” that should be investigated further. 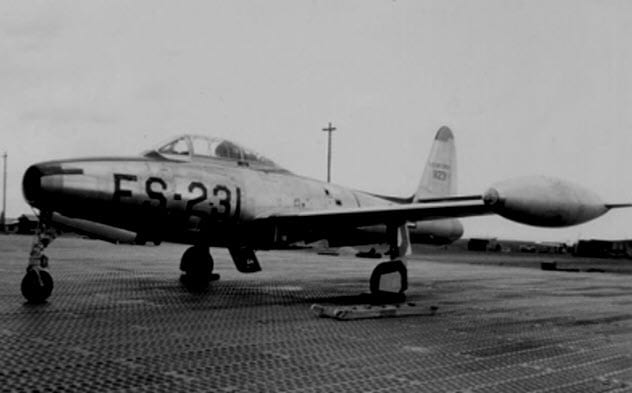 Numerous military personnel saw a UFO on the evening of August 5, 1953, near Ellsworth Air Force Base. There were also 45 concerned residents of nearby towns who witnessed the bizarre events.

The first sighting was reported just after 8:00 PM in the town of Blackhawk. Mrs. Kellian, a volunteer member of the Ground Observer Corp, had observed a strange glowing red light in the clear night sky.

As she was trained to do, she reported her sighting immediately. She was eventually put through to the on-duty radar operator at Ellsworth Air Force Base.[4]

The craft was picked up on radar clearly heading toward the base. An F-84 jet fighter on patrol in the area was directed toward the object. As the F-84 got to within 5 kilometers (3 mi) of the disc-like craft, the UFO moved away fast.

Although the F-84 attempted to give chase, it was unable to match the UFO’s speed and returned to Ellsworth. A second F-84 made its way to the area. The pilot confirmed that he could visually see the object. Also unable to keep up with the UFO, the F-84 suffered strange malfunctions of his aircraft.

Norman Muscarello was hitchhiking home to Exeter, New Hampshire, in the early hours of September 3, 1965. Patiently making his way along Route 150 as he looked out for his next potential ride, Muscarello noticed a strange light in the dark early morning sky. Within seconds, the light was heading straight toward him.

Fearing that he would be struck by the strange craft, Muscarello flung himself to the ground on the roadside. However, at the last moment, the UFO changed direction. Muscarello got up and fled the area as quickly as he could.

Around an hour earlier a short distance away, Eugene Bertrand, an on-duty policeman, had come across a parked vehicle on the side of the road. Inside sat a woman who frantically informed Bertrand that she had been chased by a “flying object.”

However, Bertrand assured the woman that there was no cause for concern. Genuinely believing that the lady had been mistaken, he went on his way.[5]

It was around 3:00 AM by the time Muscarello made his way to the Exeter Police Station. Shortly after, Bertrand returned and listened to the story himself. He then drove the young man back to Route 150 to investigate.

After parking on the same stretch of road, the two men soon spotted the strange craft. As it had done before, the object moved closer to the pair. Unnerved, the two men quickly made their way back to the police car. A short time later, calls about more sightings began to flood in. 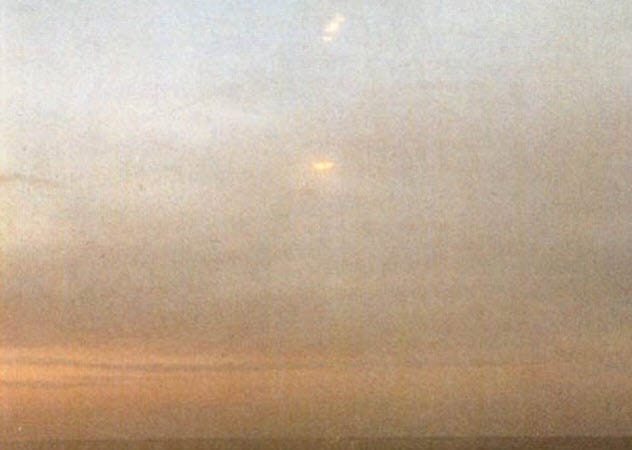 Strange spherical lights had been reported regularly from the coast along the Baltic Sea from the beginning of August 1990. By August 24, the lights appeared to have moved inland and were reported by residents of Greifswald, a coastal town in eastern Germany.

At first, the strange spheres hovered in the air almost motionless for around 30 minutes. Many witnesses managed to capture photographs and even video footage. The case is regarded as one of the best-documented UFO sightings.[6]

It seemed to consist of two separate sets of lights. The first set formed a circle and remained largely still. When they did move, they moved as one. The second set of lights seemed to be in the shape of a Y. Of more import, they appeared to move freely of each other.

Neither the Mutual UFO Network (MUFON) nor mainstream scientists have been able to offer a solid or satisfactory explanation. 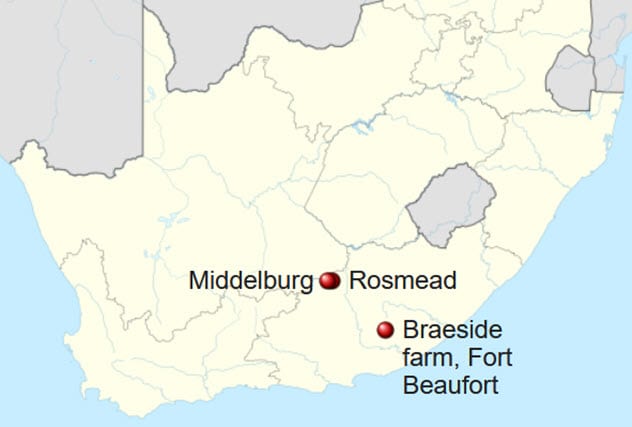 Bennie Smit believed without a doubt that he and his workers had witnessed a strange craft over his farm on June 26, 1972. However, he firmly believed that they had seen a top secret military craft and not visitors from another world.

Smit’s farm sat about 16 kilometers (10 mi) away from Fort Beaufort, a town in the Eastern Cape Province of South Africa. On that June morning, Smit found his workers cowering in a shed on the farm. They claimed that something strange was hovering above the trees in one of the fields.

Smit went to investigate and did indeed see a strange object. The farmer promptly fired at it with his .303 rifle. He maintained that his aim was correct and that he did hit the target. The bullets, however, had no effect.

Smit contacted the local police, who arrived just in time to see the craft landing on the ground. The UFO appeared to be the same shape as an oil drum, with three distinct “legs” underneath it.

One of the policemen, Sergeant Kitching, also fired his weapon at the craft. The UFO appeared to react to the discharge this time. The strange object began to change color from black to green. Then it turned yellow before finally becoming a pale white.

The witnesses heard a “whirring” sound before the craft took off from the field and vanished.[7]

On August 11, 2014, hundreds of people in Houston saw a circle of lights in the evening sky. Pictures spread like wildfire over social media accounts. When video footage of the encounter was made available on the Internet, however, it became apparent that the lights were moving independently and were not a static circle.

Dr. Carolyn Sumners of the Houston Museum of Natural Science cautioned that no one should assume that the strange object was an alien visitor. With UFO sightings, she stated, we need to figure out what else it could be instead of aliens. However, no official explanation or theory has since been made available.

Witnesses to the event have their own theories about it. Not surprisingly, many believe that the lights were indeed extraterrestrial in origin. However, others think they saw a government drone or even the reflection of lights from a nearby football stadium.[8]

During a minor league baseball game between the Vancouver Canadians and the Everett AquaSox in 2013, hundreds of people had their attention drawn away from the game as a strange object appeared over the field.

The UFO had a triangular shape with lights around its edges. Even the players seemed to notice the aerial anomaly. One spoke on social media after the contest about the “alien spaceship” that had been seen.[9]

Many photographs and videos soon surfaced online, although no official explanation was initially offered. A local newspaper, however, speculated that the UFO could have been—and most likely was—a remote-control helicopter.

But the truth about this “UFO” was revealed just a couple of weeks later. The whole thing was a marketing ploy to publicize a new planetarium theater at the H.R. MacMillan Space Center in Vancouver.

Maybe that’s why Vancouver had more UFO sightings in 2013 than any other Canadian city. 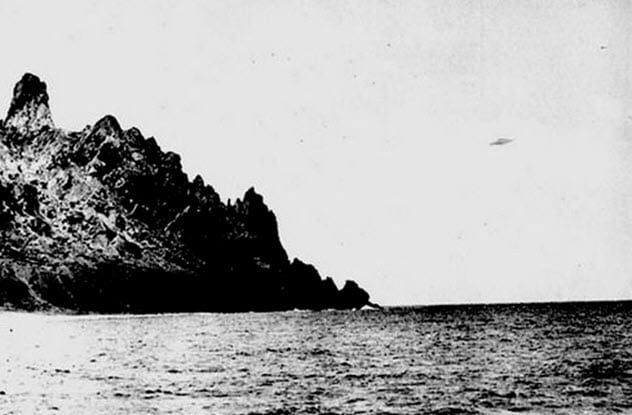 In October 1957, the Brazilian navy set up a scientific research base on the island of Trindade. By January 1958, they were witness to some of the most bizarre UFO sightings of the 20th century.

Upon establishing the base, personnel began to report strange silvery objects that seemed to be observing their actions. On the morning of New Year’s Day 1958, the entire garrison witnessed a strange light passing overhead. The following evening, a glowing object circled around one of the navy ships for 10 minutes. It executed sudden and precise turns as it did so.

On January 6, Commander Carlos A. Bacellar launched a weather balloon. However, he realized that the signals it should have been emitting had suddenly stopped. When he looked at the sky, he saw the balloon being “sucked up” into a cloud and disappearing.

Ten minutes later, it reappeared, only without its instruments. A little while later, a silver object exited the same cloud and calmly made its way from the scene.[10]

On January 16, the entire crew of a navy ship off the coast of the island witnessed a strange bright object. It was making its way over the ship and toward the island. One observer managed to take several photographs of the airborne craft. Once the photographs had been developed, they were promptly released to the press.