In the 1960s, a Viking settlement was discovered in Newfoundland, Canada that predated Christopher Columbus’s famous voyage by about 500 years. The discovery shattered the notion that Columbus was the first person to discover the New World (outside of the indigenous people who had been living there for millennia, of course). So if the Norse could do it, who else might have managed to cross the ocean blue before fourteen hundred and ninety-two? Here are ten theories that have been proposed by college professors, museum professionals, and amateur historians. We covered this topic six years ago, so it seems appropriate that we do an update today! 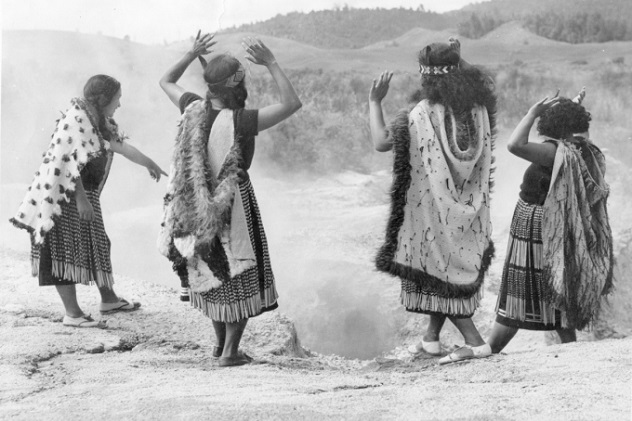 The epic journeys of the ancient Polynesians inspired the 2016 Disney movie Moana. Starting about 3,000 years ago and using ocean-going catamarans, they colonized New Zealand, Hawaii, Rapa Nui (Easter Island), and everything in between. Their network of islands, now referred to as the Polynesian Triangle, was larger than modern-day Russia.

The Polynesians almost certainly made it to South America before Columbus. Sweet potatoes, which are native to South America, were being cultivated on Mangaia Island and Hawaii centuries before European contact. In 2007, chicken bones dating from 1321 to 1407 were discovered in Chile. Although there is not yet DNA evidence to prove a link, Polynesians were known to bring the tasty birds around the Pacific.

An analysis of Rapa Nui islanders showed that DNA from South America appeared in their gene pool somewhere between 1300 to 1500 AD. But how did it get there? Some believe South Americans sailed over on balsa wood rafts (Thor Heyerdahl famously sailed a reproduction from Peru to Raroia Island in 1947) but many experts believe that the superior vessels and sophisticated wayfinding of the Polynesians—still used today—is much more likely.[1] 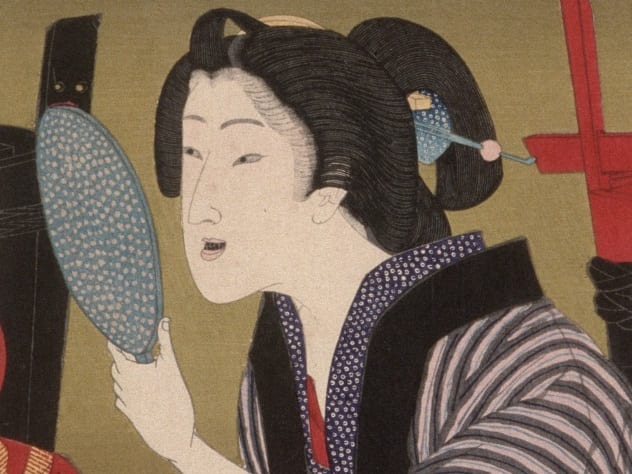 In the late 1960s, Ecuadorian businessman Emilio Estrada led an excavation of Valdivia, a 5,000year-old archeology site in Ecuador. There was a large amount of strange pottery, so he wrote a letter to Betty Meggers at the Smithsonian Museum to help identify them. She replied that they looked like 5,000-year-old Jomon pottery from Japan.

But how could a Japanese ship sail all the way to Ecuador? They might have been aiming for it. The Kuroshio Current has been known to push Japanese fishing junks out to sea, leaving the crew to drift for months. In 1815, a junk was washed ashore near Santa Barbra, California with three crew members still alive after 17 months at sea. In 1843, another appeared on the Mexico coast with two traumatized fishermen still inside.

The Kuroshio does not have a direct line to Ecuador, but there seem to be some DNA markers and unique viruses in the area hinting that a Japanese junk might have bested the odds. If so, those Japanese fishermen beat Christopher Columbus by about 4,500 years.[2] 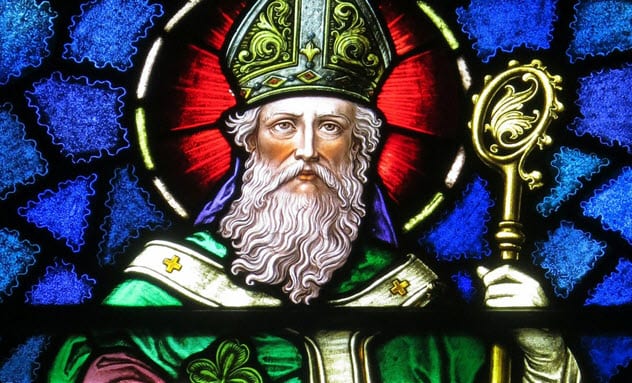 Not long after the death of Saint Patrick, another Irish saint was in town. Saint Brendan was nicknamed “the Navigator” for his voyages to Scotland, Wales, and Brittany to spread Christianity. In the ninth century, a semi-mythical, semi-historical account of his voyage became a medieval bestseller

In The Voyage of Saint Brendan, Saint Barinthus tells Brendan that he has just returned from Paradise, a land far beyond the western horizon. Brendan decides that he needs to see it for himself. He assembles a crew, a leather-bound Irish currah boat, and some divine goodwill before setting out. The crew travels through a mystical world, including “hell,” where “great demons threw down lumps of fiery slag from an island with rivers of gold fire.”

Could this be a reference to Iceland? And if the Irish reached Iceland, could they have followed the Viking path all the way over to Newfoundland? To test this theory, historian and adventurer Tim Severin successfully sailed a leather-bound currah boat from Ireland to the New World in 1976. So, it is possible![3] 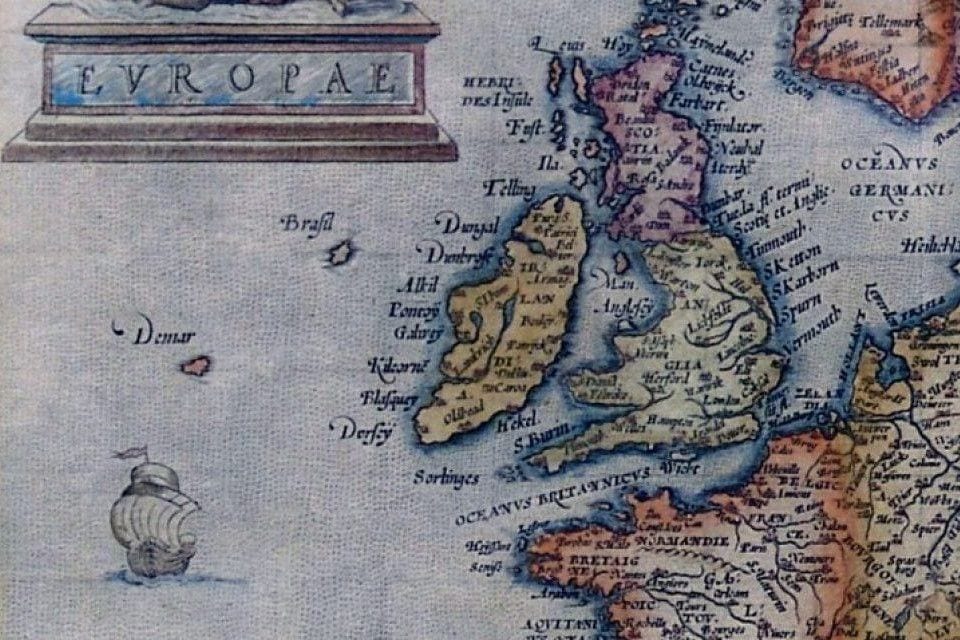 In 1475, medieval codfish conglomerate the Hanseatic League refused to sell cod to the British port of Bristol. The English, who loved fish, immediately started looking for a workaround.

A wealthy customs official named Thomas Croft several funded fish-finding expeditions led by merchant John Jay, whose plan was to find a mythical fog-hidden land west of Ireland called Hy-Brasil. The official record says, unsurprisingly, that they didn’t find it. But shortly afterward, Bristol started importing a suspicious amount of fish. Thomas Croft was arrested for illegal trading, only to be acquitted at trial. So where were the fish coming from?

If the Bristol fisherman discovered the rich cod stocks off Newfoundland, they would understandably want to keep it an industry secret. Too bad Christopher Columbus spilled the beans.[4] 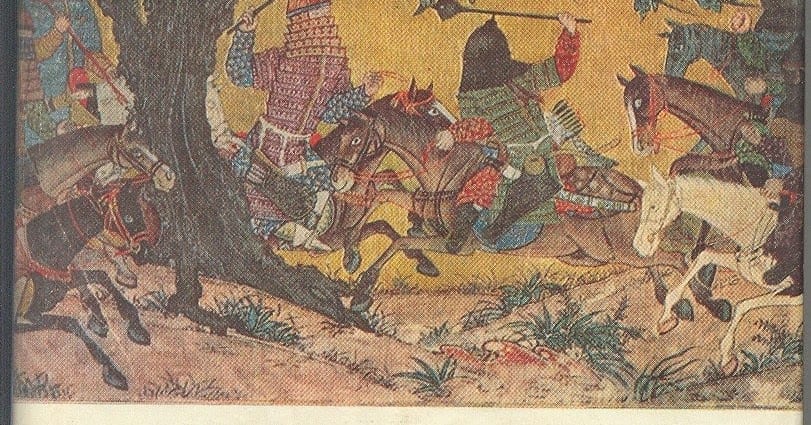 The Arab historian Abu al-Hasan Ali Al-Mas’udi, who lived from 896 to 956, described in his famous history book The Golden Meadows that a Moor named Khoshkhash had sailed into the Atlantic. “Nobody knew for a long time what had become of them,” he wrote, “At length they returned with rich booty.” Although the book fails to mention where Khoshkhash got his booty, Muslim scholars have suggested he traveled to the Caribbean islands over 600 years before Columbus.

In the 1960s, a container of many Roman and two 8th century Arabic coins was found washed up off the coast of Venezuela. These were used in medieval Europe, leading some to consider this evidence for Khoshkhash’s voyage. But there is very little information about the coins, including (as one researcher put it) “whether the container was a ceramic amphora or a pickle jar.”[5] 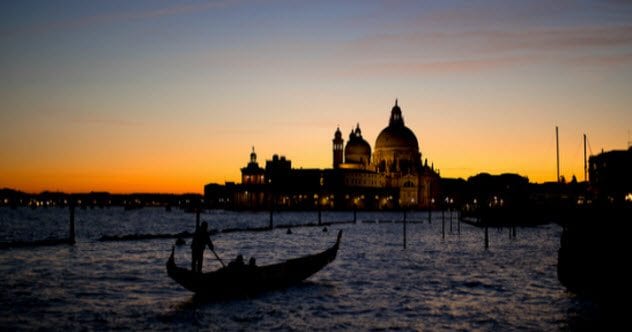 In 1380, Nicolò Zeno sailed from Venice to Flanders. From there, according to the text, he was shipwrecked on an island called Frislanda and rescued by a prince named Zichmni, who was in the business of conquering everything in sight. Nicolò wrote to his brother Antonio and together they helped Zichmni win lots of battles against defenseless islanders. The book also included a map they supposedly drew, which is a semi-accurate depiction of northern Scotland, Iceland, and Greenland.

Modern theorists suggest that “Zichmni” is a very, very misspelled “d’Orkney,” (as in Henry Sinclair, Earl of Orkney) and that the islands mentioned are similarly butchered names for islands in the North Atlantic.

It’s also been suggested that Henry Sinclair and the Zeno brothers sailed beyond Greenland and followed the Viking path to Nova Scotia, over a century before Columbus. In 1998, the Prince Henry Sinclair Society of North America unveiled a monument at his supposed landing spot in Canso, Nova Scotia in the hope it would draw tourists.[6] 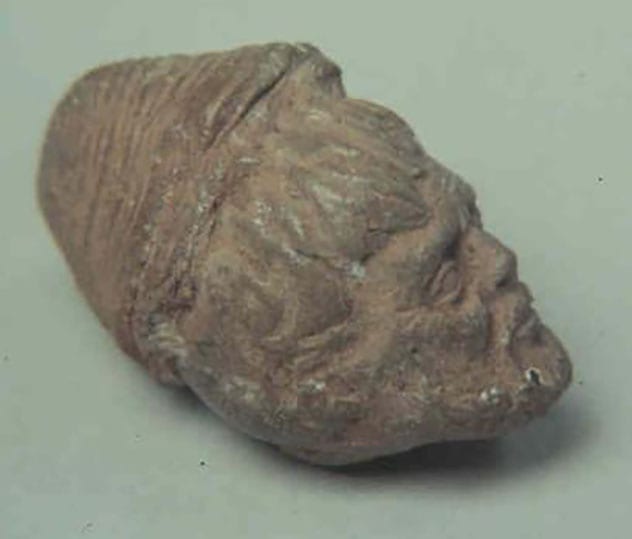 In 1933, a tiny terracotta statue head was excavated at an archeology site in Calixtlahuaca, Mexico. The face was beaded, with decidedly non-Mexican features and wearing a truncated cap. Ernest Boehringer, a specialist in Classical Archaeology, examined the head and declared it to be of second or third-century Roman origin. But how could a Roman head end up at an archeology site occupied from 1300 to 800 B.C.?

One theory is that the statue head was placed on the site as a joke. Dr. John Paddack used to tell his classes at the Universidad de las Américas that it had been planted by Hugo Moedano, a student who worked at the site. It also could have been a mix-up in the paperwork, since archeological standards in the 1930s were a tad bit looser than they are today. Or—a theory that has yet to be disproven—it could be evidence that a Roman made their way to Mexico in pre-Columbian times.[7] 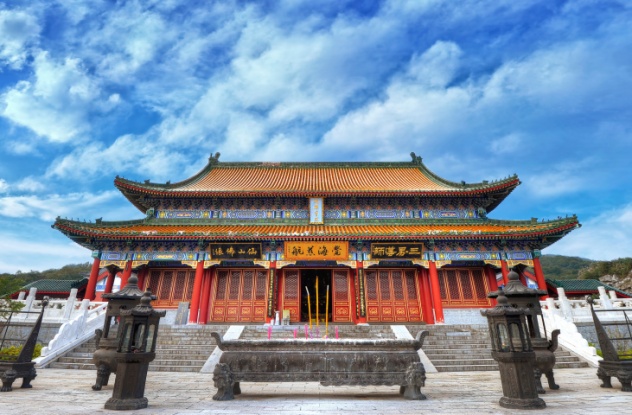 In the early 1400s, China was the world’s greatest naval power. Their treasure ships were described as the size of the World War I vessel USS Minnesota and traveled throughout southern Asia, the Indian Ocean, the Persian Gulf, and the east coast of Africa. If the Chinese had wanted to cross the Pacific, they certainly could have.

Former submarine commander Gavin Mendes believes that a Chinese treasure fleet commanded by Zheng He went further than the others, exploring Australia, the Caribbean, and even leaving settlements in South America. But he had little evidence to support these claims until Chinese lawyer Liu Gang found an old map in a Shanghai secondhand bookshop that showed North and South America in surprising detail. The map contained a note saying it was a 1763 copy of a 1418 original—about the date Mendes had claimed.

The cartography community considers the map to be a fake. China and Hong Kong are full of “ancient texts” that can be bought on street corners, and the map is filled with naming errors—including a modern Chinese spelling of Mohammed. Not exactly ironclad evidence for a transcontinental voyage, but further proof might be out there.[8] 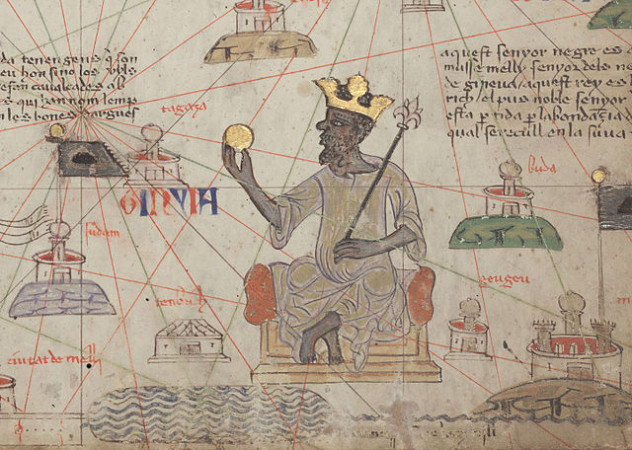 Mansa Musa ruled the Islamic Empire of Mali and was so wealthy that when he went on his 1324 pilgrimage to Mecca, he gave away so much gold that the price dropped internationally. But when asked about his brother Abu Bakar II, who held the throne before him, Mansa Musa said, “The ruler who preceded me did not believe that it was impossible to reach the extremity of the ocean that encircles the earth (meaning Atlantic), and wanted to reach that (end)… never to return nor to give a sign of life.”

Malian scholar Gaoussou Diawara believes that the reason Ali Bakar II never came back is that he landed in Brazil. Specifically, the city of Recife, whose other name of Purnanbuco might be an aberration of the Mande name for the rich goldfields of the Mali Empire. He also cites chemical analyses stating that the gold on American spears might have come from Mali and a report by Christopher Columbus saying that he had encountered black traders on his voyages.

Whether Abu Bakar II made it to Brazil or drowned in the Atlantic Ocean, his heir Mansa Musa took the throne and become the greatest emperor in Mali history.[9] 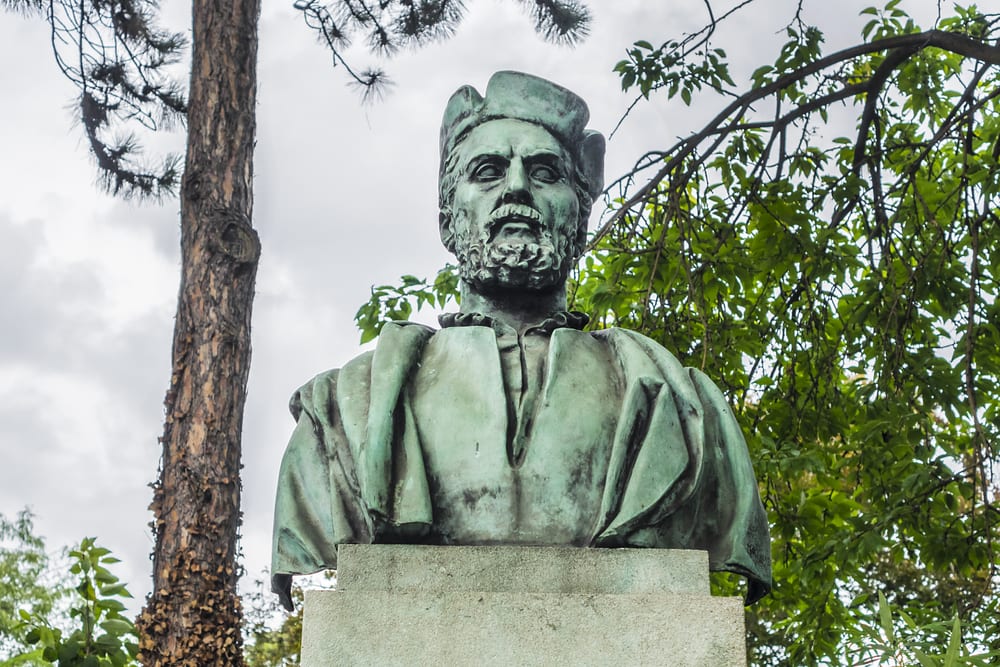 In 1530, the Basque were whaling in Newfoundland. In 1535, when Jacques de Cartier “discovered” the Saint Lawrence River, he found about 1,000 Basque fishing boats already harvesting cod. This makes them the first Europeans to settle in the area after the Vikings.

The Basque are a unique group of people that live on the border of France and Spain. They are culturally unique, and their language Euskera has no similarities to those of their neighbors—so they don’t do a lot of talking to outsiders. Shipbuilders and seafarers for centuries, they were expert navigators and fishermen.

Either the Basque swooped in the moment Columbus came back, or they had a head start—perhaps from chasing whales across the Atlantic. After all, they were extraordinarily good at preserving fish for long voyages. There may yet be a pre-Columbian Basque settlement waiting to be discovered in Newfoundland.[10]