Stars are some of the most important heavenly bodies in our universe. We’ve already talked about some of the most captivating—and deadliest—planets that orbit the stars, but these luminous celestial bodies are intriguing in their own right.

We often think of stars as huge, hot, round masses of hydrogen and helium even though they are not always so. Astronomers have detected lots of stars that destroy our well-established notions. These discoveries are odd and ultimately fascinating. 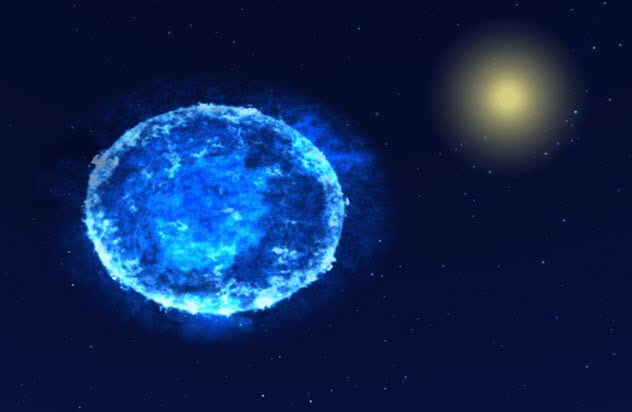 What is cooler than a round star? Obviously, one that’s shaped like an egg.

Enter Vega (aka Alpha Lyrae or Alpha Lyr), an egg-shaped star located 25 light-years away from us. It is one of the most popular stars out there, and astronomers seem to study it more than they do our own Sun.

Vega has a weird shape because of its superfast rotational speed, which is 93 percent of its critical velocity (aka “critical rotation,” the maximum rotational speed when the star would break apart). Vega is so fast that it completes one rotation on its axis in just 12.5 hours. Our Sun completes the same in 27 days.

This has left Vega bulging 23 percent wider at its equator than at its poles. The abnormal shape has transferred so much energy away from the equator that it is 2,200 degrees Celsius (4,000 °F) cooler than the poles.[1]

9 Two Massive Stars Merging Into One 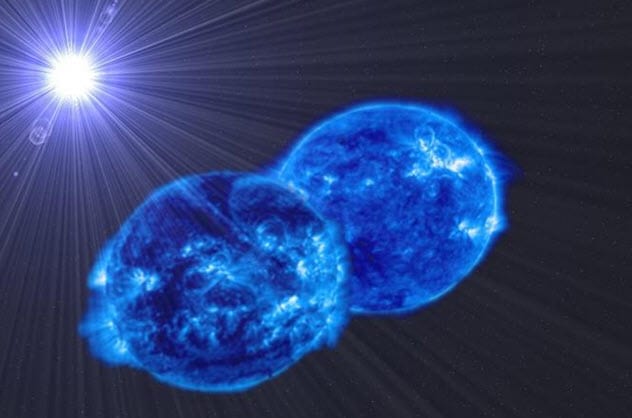 Over a decade ago, astronomers discovered a massive star in the Camelopardalis (“Giraffe“) constellation 13,000 light-years from Earth. They called the system MY Camelopardalis.

Originally, amateurs had thought they were seeing a single massive star. But astronomers soon realized that they were looking at two massive stars closely orbiting each other. In fact, the partners complete orbits around each other in just 1.2 days.

In fact, the atmospheres of the stars are already interacting. This will continue until the stellar cores finally fuse into one. Astronomers do not know precisely what will happen at that time. However, they speculate that the merger will create a large explosion that releases massive energy.


8 The Star With Spiral Arms 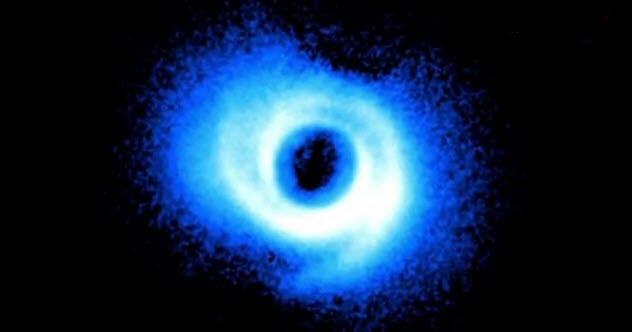 When we think of spiral arms, we envision galaxies like the Milky Way. However, star SAO 206462 is here to prove us wrong because it has two spiral arms. SAO 206462 is in the Lupus (“Wolf”) constellation about 460 light-years away from Earth. The star is surrounded by a very wide circumstellar disk made of dust and gas.[3]

This broad disk is almost two times the width of Pluto’s orbit. Astronomers know that spiral arms can develop around a star when new planets are materializing inside its disk. In fact, they think that the two spiral arms were formed by two new planets developing inside the disk.

7 The Star With Water Clouds 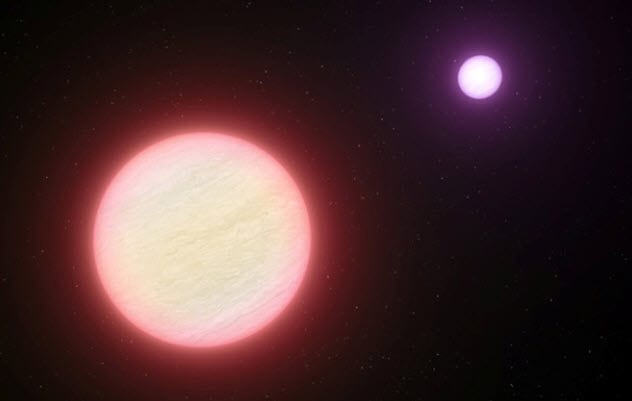 We know that stars are insanely hot. For example, our Sun averages around 5,500 degrees Celsius (10,000 °F) in the photosphere. However, how about a star that is just 100 degrees Celsius (212 °F)? That is the boiling point of water, which is too cold for a star. But that is the temperature of CFBDSIR 1458+10B (pictured above on the right).

It is a brown dwarf 75 light-years away from Earth in the CFBDSIR 1458+10 binary system. A binary system has two stars that orbit each other.

The mass of a brown dwarf falls between that of a giant planet and a small star. It is too big to be called a planet but too weak to be considered a real star. Brown dwarfs are considered failed stars because they do not have enough mass for gravity to cause nuclear fusion, which is how stars produce light and heat.

Astronomers believe that conditions on CFBDSIR 1458+10B are more like those of a large planet than those of a regular brown dwarf. They even think that this cold brown dwarf may have clouds that contain water.[4]


6 The Star That Became A Diamond Planet 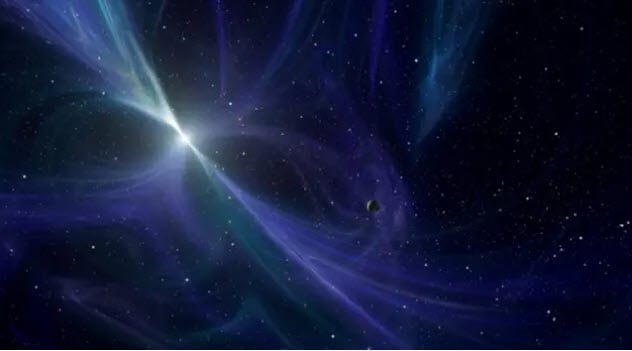 It is not often that we hear of a star becoming a planet, much less a planet covered in diamonds. But this unnamed star did just that.

Astronomers discovered the star-turned-planet when they received some pulsar signals in our Milky Way. Pulsar signals are radio waves and radiation released by fast-rotating neutron stars, which are the collapsed cores of dead giant stars.

Astronomers discovered something was amiss when they found that the spin of the pulsar appeared to be affected by gravity. This type of spin could only happen if an exoplanet was orbiting the pulsar.

In fact, astronomers detected an exoplanet rapidly orbiting the pulsar at close range. The exoplanet also had a very large mass (like that of Jupiter) even though it was only five times bigger than Earth. At first, this didn’t make sense. An exoplanet orbiting that close to a high-gravity star shouldn’t have such a large mass that was so tightly packed.

Astronomers soon discovered that the exoplanet had once been a star that was part of a binary system. The pulsar had been the second star, and the two had orbited each other in those days. However, the stars eventually burned through their fuel and got so close that the bigger one yanked the matter from the smaller star.[5]

The result was a cold planet that orbits a pulsar. However, there is beauty in the destruction. Astronomers believe that the fusion-less planet is comprised of crystalline carbon, the same material that makes up diamonds.

5 The Star Within A Star 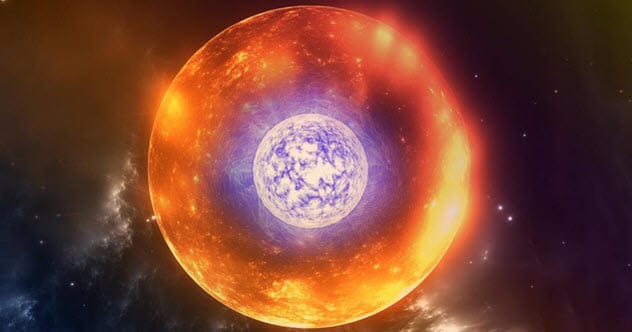 A Thorne-Zytkow object (TZO) refers to a star that is inside another star. The object was named after physicist Kip Thorne and astronomer Anna Zytkow. Together, they proposed the existence of such a star in 1975. Thorne and Zytkow said that TZOs are formed when a neutron star gets consumed by a red supergiant star.

As previously mentioned, a neutron star is the collapsed core of a dead giant star. A red supergiant is an old star that is almost out of hydrogen—a major element it needs to create light and heat. Red supergiants are the largest stars in the universe and can reach up to 2,000 times the size (in diameter) of our Sun.

In 2014, astronomers believed that they had found a TZO, which they named HV 2112. The star was in a dwarf galaxy 199,000 light-years away from Earth. HV 2112 resembles a very bright red supergiant. However, it is considered a TZO because it contains large amounts of some elements that are not released by typical red supergiants.[6] 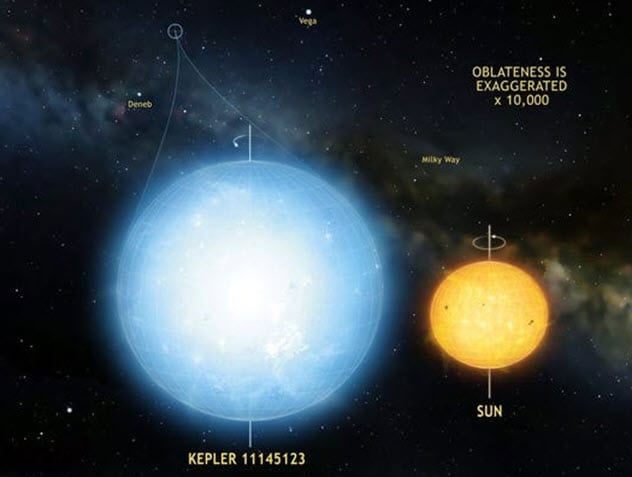 We often think that planets and stars are round even though they are not. They are actually wider along their equators due to the centrifugal force that occurs when they rotate. Approximately 5,000 light-years away from Earth lies Kepler 11145123, a star that is the roundest natural object known to exist at this time.

Typically, the faster the rotation, the wider the star or planet is at the equator. Earth is not perfectly round. The Sun and star Kepler 11145123 aren’t, either. However, Kepler 11145123 comes close.

3 A Star Smaller Than Jupiter 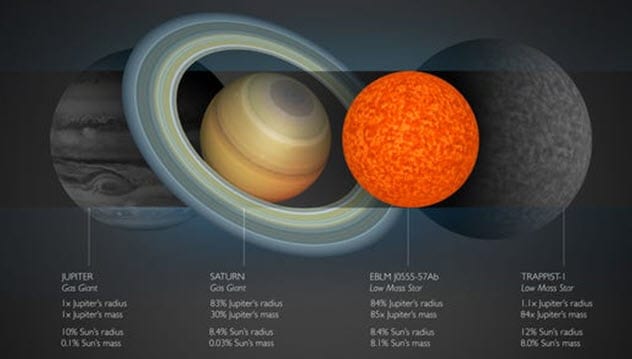 We often consider stars to be large heavenly bodies, even though that is not always so. They could be much smaller, say the size of Saturn. Compared to Earth, Saturn seems huge: Approximately 764 Earths would fit into Saturn.

However, that is still much smaller than the size of our Sun. About 1.3 million Earths would fit into the Sun. Saturn is also smaller than Jupiter, the largest planet in our solar system. Nevertheless, astronomers have discovered a star that is the size of Saturn. That star is EBLM J0555-57Ab, which is 600 light-years away from us.

EBLM J0555-57Ab would not have enough internal pressure for nuclear fusion to occur if it were smaller. As we mentioned earlier, nuclear fusion is how stars produce heat and light. This size is just right to meet the minimum mass requirements for nuclear fusion in a star. Anything smaller and it would have been a brown dwarf—one of those failed stars with insufficient mass for gravity to cause nuclear fusion.[8] 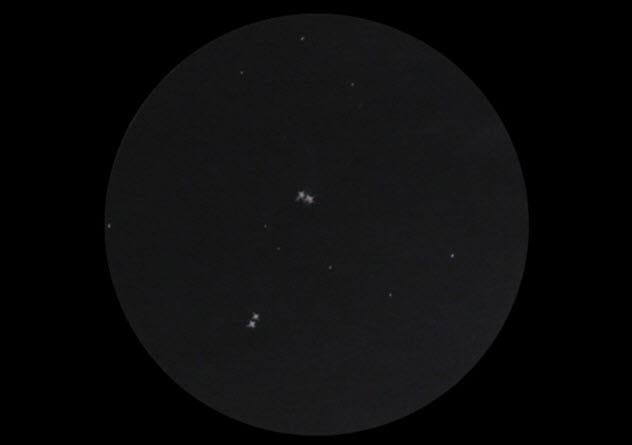 The Epsilon Lyrae multiple star system is 160 light-years away from Earth. This fascinating system contains a bit of a surprise. It looks like a binary system where two stars are orbiting each other. But upon closer examination, each of those stars is a binary itself. In other words, each star is really two stars orbiting each other. Each pair also orbits the other pair. As a result, the system contains two binaries within a binary (aka “The Double Double”).

From Earth, each stellar pair seems so close together that we could confuse both stars in each set for a single star. This happens even though these individual stars are actually so far apart that they take around 1,000 years to complete a single orbit around the other in its stellar pair.

The binaries themselves are also far apart. The distance between the two sets is 10,000 times the range between the Earth and the Sun. The binaries require around 500,000 years to complete a single revolution around each other.

Interestingly, astronomers have discovered a fifth star that orbits one of the stellar pairs. These space scientists also believe that other undiscovered stars are orbiting in Epsilon Lyrae. In all, astronomers think the system involves 10 stars.[9]

1 The Star With A Tail 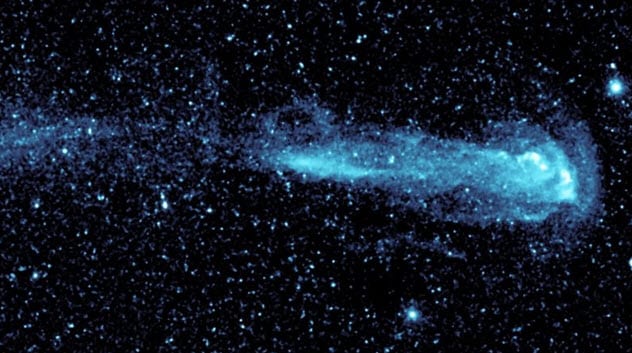 When we think of tails in space, we usually envision comets. Mira (“Wonderful”) is here to prove us wrong. It is a binary star in the Cetus constellation 350 light-years away from Earth. One star is a red giant called Mira A, and the other is a white dwarf called Mira B. A red giant is a dying star, while a white dwarf is a dead star.

Astronomers detected the stars while checking out the universe in ultraviolet light. They found that some comet had left a tail that was 13 light-years long. That is 20,000 times the average distance between Pluto and the Sun. However, they soon discovered that the tail was actually coming from the red giant Mira A.

The tail is shedding several elements, including carbon and oxygen, which astronomers think could create new solar systems. Mira has been releasing these elements for over 30,000 years.[10]