Art is a subjective thing. Some people look at modern art and see a pile of junk while others stare at a pile of junk and see profundity. One of the biggest misunderstandings about art history is that there has been a steady progression from primitive art to some level of perfection it reached recently. In fact it is not that people in the past couldn’t make art in the same way we do it’s that they chose to follow styles that they found most beautiful and moving.

Here are ten of the ancient world’s most amazing styles. 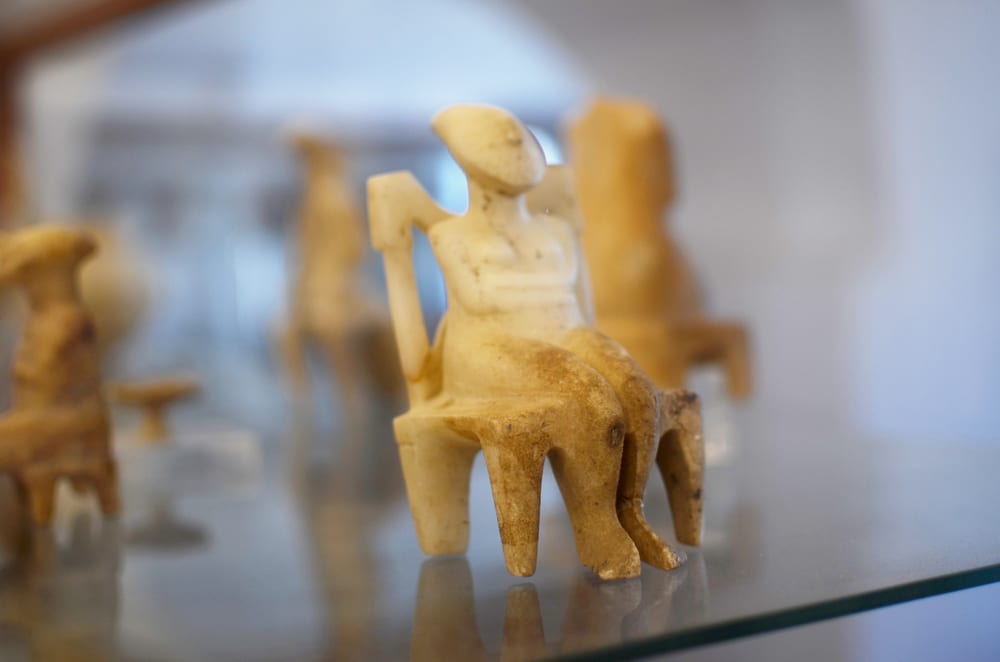 Cycladic figurines are instantly recognisable. Carved from white marble they tend to show people with elongated heads, pointed noses, and smooth lines. There is some evidence that the blank heads may once have been painted but today they stare out from museum cases with completely expressionless faces.

Despite being made over at least a millennium (3300-2300 BC) the figurines show a remarkably consistent style. The standing figurines are often female and are shown with arms folded across their belly. Sometimes the pubic hair of the figurines is scratched and drilled into the marble.

Another type of Cycladic figure represents musicians. Some of them play a large harp that rests on their knee while another blows a double pipe. The curving shapes of the figurines would not look out of place in a modern art institute and they have been found across the Cycladic islands suggesting they were just a popular in their own day as they are prized today.[1] 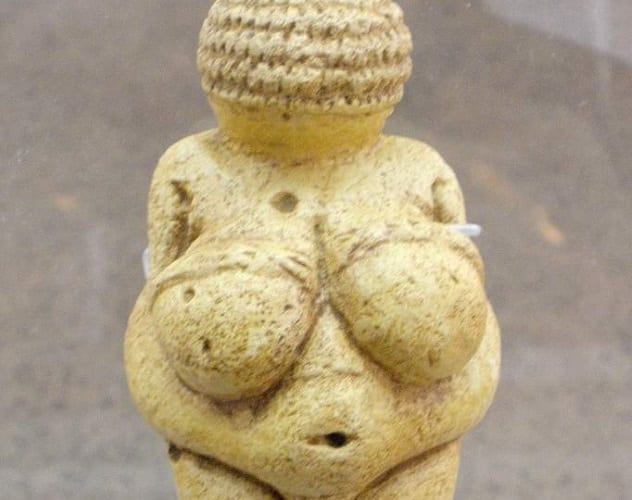 The ancient Roman goddess Venus was the embodiment of love and sexuality. Her statues from the Classical Age are therefore representative of what sculptors of the time found most attractive. If the group of sculptures known as Venus figurines also show idealised womanhood then stereotyped ideas of beauty have changed over the millennia.

The Venus figurines tend to show rotund women with oversized breasts, ample hips, and large buttocks. Sometimes their private parts are similarly emphasised. The earliest of these figurines, the Venus of Hohle Fels, was carved from a mammoth tusk and dates from around 35,000 years ago. Other figurines are made of stone or ceramic and most are relatively small in size. This suggests that the Venus figures were meant to be carried around with the people who owned them.

No one can say exactly what the around 200 Venus figurines represent. Were they a mother goddess? Were they fertility idols? Were they simply figures of beauty and security? It is unlikely that we will ever know for sure.[2] 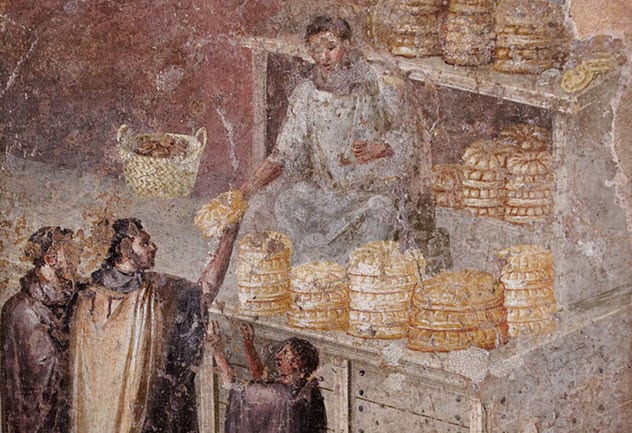 Romans surrounded themselves with art. From small statues of their gods, to monumental sculptures, to graffiti scratched into their walls there was no part of life that could not be decorated. This included the interior walls of their homes. Unsatisfied with just painting their walls they sometimes created false views to create the illusion that they were dining outside. These false views are known as trompe l’oeil.

At first the frescos, paintings done directly onto fresh plaster, were large blocks and represented architectural features like pillars and doorways. Soon the paintings evolved into more complex scenes. Perhaps a door would open and a person would peep out from behind it. Sometimes a false window would open out onto a vista showing fields or beaches.

Perhaps the highest achievement of Roman fresco painting can be found in a villa belonging to the Roman Empress Livia. The walls of the dining room of the villa are not covered in fake walls and windows. Instead the walls are painted as if they are not there at all. The frescos show a garden scene containing trees, fruit, birds, and flowers.[3] 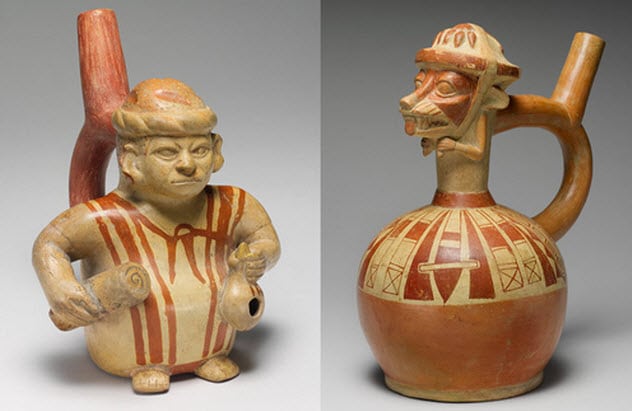 The Moche people lived on the coast of Peru from around 100-700 AD. While their culture is little known today they left large amounts of pottery that can be found in museums around the world. Though sometimes the pottery is hidden away because of the sensitive nature of the scenes the pottery depicts.

Sometimes Moche pottery is relatively simple in form and shape, but with complex images painted on it. Other times the pottery is sculpted into complex configurations. These can show everything from animals, to gods, to portraits of individual humans. Sometimes what the humans are doing is revealing in many ways. 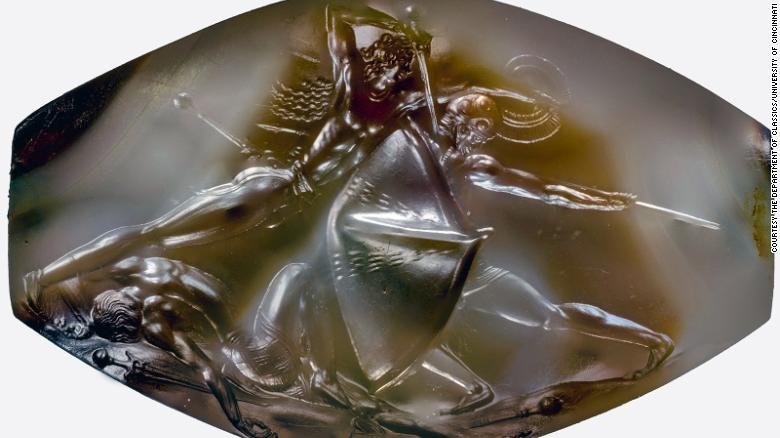 People have always loved pretty stones. As soon as gems were discovered humans were using them to decorate their bodies. The pretty stones were not beautiful enough on their own however. From at least 5000 years ago people were cutting into gems to create images. And these were not simple geometric shapes – some of them are as life-like as anything created in stone can be.

These images could show everything from mythological beings to individual people. Roman Emperors were fond of having their faces cut into gems. But these were not large objects. Most of the engraved gems from antiquity are small enough to be worn in rings and would have functioned as seals.

The stones were engraved using tiny drills and abrasive dust. The engravers must have had amazing eyesight because the detail in their work can be as small as half a millimetre. One gem known as the Pylos Combat Agate manages to show two men fighting in anatomically accurate detail on a surface just 3cm across. A fallen soldier also on the gem is sculpted so skilfully that individual muscles can be seen.[5] 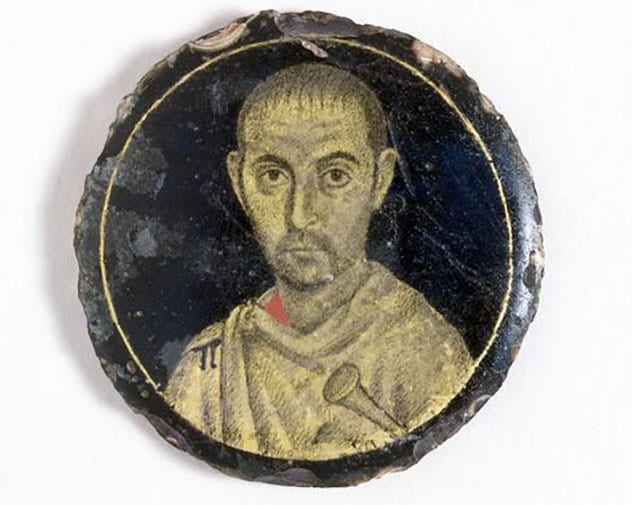 Before photography there was no easy way to capture a person’s likeness. The best most people could hope for was a description – and one that picked out mostly unflattering parts of their image. Legal texts from ancient Egypt will often name a person and then describe them as “with a scar on their forehead” or “long-faced” or “bald in front.” For some lucky Romans however their faces have been hauntingly preserved.

In Roman gold glass portraits the faces of certain Romans have survived. These portraits were made by placing a thin layer of gold onto glass and then pinpricking it and scratching to create a delicate image. The portraits can capture the shade created by the shape of a face and often include the imperfections that make our faces unique.

Most of the portraits were made on the bases of bowls and cups to celebrate a special occasion. When the person in the portrait died however they were often broken out of the glass vessel and used to mark their grave.[6] 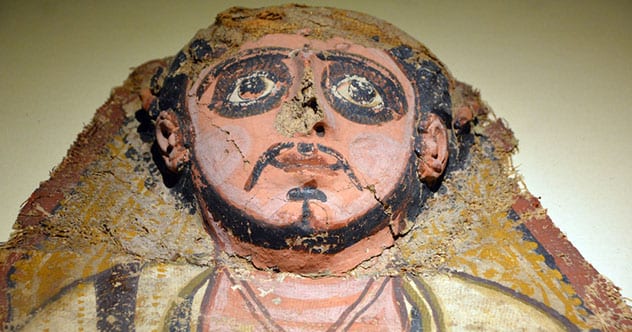 Ancient Egyptian art is not generally known for its realism. People were often shown in profile and in strange contortions. But Egyptian art did not remain static over the thousands of years that it was produced. Once Egypt was incorporated into the Roman Empire there was a synthesis of their different styles.

Egyptian culture placed a great emphasis on the afterlife and the commemoration of the dead. While pharaohs were given gold and gem encrusted sarcophagi more humble people had to make do with wooden face-masks. These are known as Fayum Mummy Portraits and were created on wood or directly on the wrappings of the mummy.

Unlike the stylised images found elsewhere in Egyptian art these portraits are very personal. The shadows that play across the faces make them feel three dimensional and alive. The portraits are also revealing about how people in the ancient world really looked. Normally hairstyles and make-up die with the person but by looking at these portraits reveals how fashions in Egypt changed over the centuries.[7] 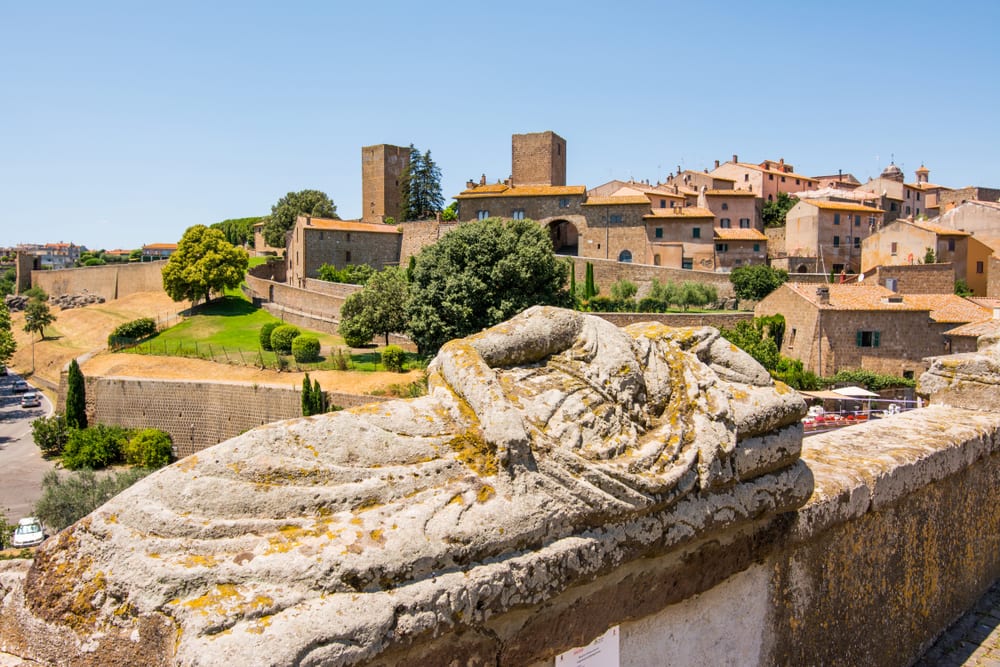 Placing a painting or image in a grave is one way of making sure that the appearance of a person is not forgotten but if you want to really capture how a person looks then Etruscan sarcophagi are probably the way to go. Etruscan tombs often took the form of a terracotta statue of the deceased. They are almost always shown as if they were reclining on a banqueting couch and enjoying an eternal feast.

The tombs did not contain a body because the Etruscans cremated their dead. Perhaps that is why creating a lasting monument of the dead was so important to them. The terracotta of the tomb was painted in brilliant colours. Unlike in some ancient societies it seems that women were as important as men. Married couples often shared a tomb and were shown side by side in death.

One sarcophagus belonging to a woman called Seianti Hanunia Tlesnasa was found to contain the woman’s complete skull. Using this skull researchers were able to reconstruct her appearance in life and showed that the woman depicted on top of the tomb really was the woman buried in it.[8] 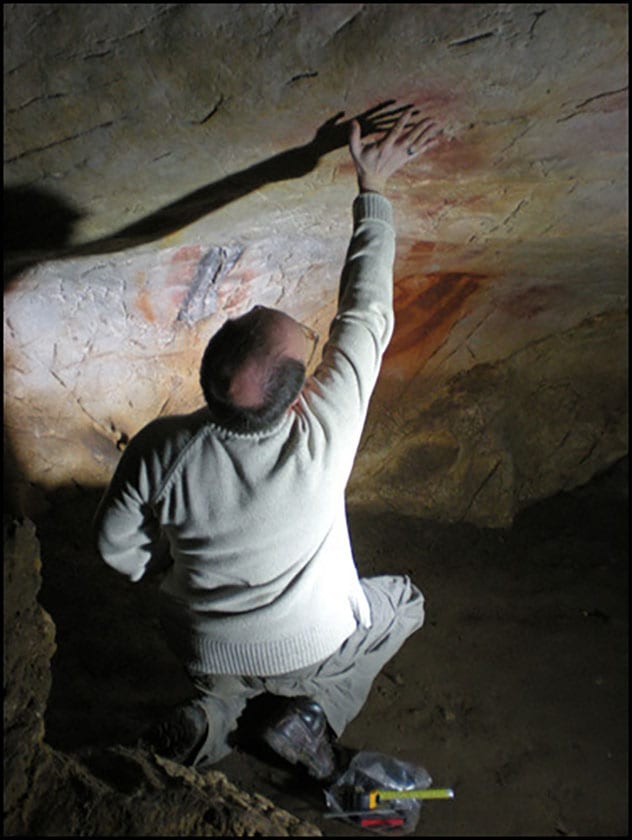 Hands are among the most common finds in stone age art. Rock faces from South America, to Europe, to Asia, to Australia are all covered in the hands of our ancestors. These images of hands stretch back as far as 39,000 years.

Sometimes the artist would use powdered pigments and place their hand directly in them before leaving a hand print on the rock face. More commonly though they would use a tube to blow watered-down pigment over the hand to leave a negative image on the wall. From studying the hands we know that this type of art was made by men, women, and children. We can even tell that people in the stone age were mostly right-handed because most of the hands depicted were left hands. The artists would have held the tube used spray the pigment in their dominant hand.

What the purpose of this art was remains debated. The hand prints are often found in the most hard to reach places in a cave system while flat sections of wall were left unmarked.[9] 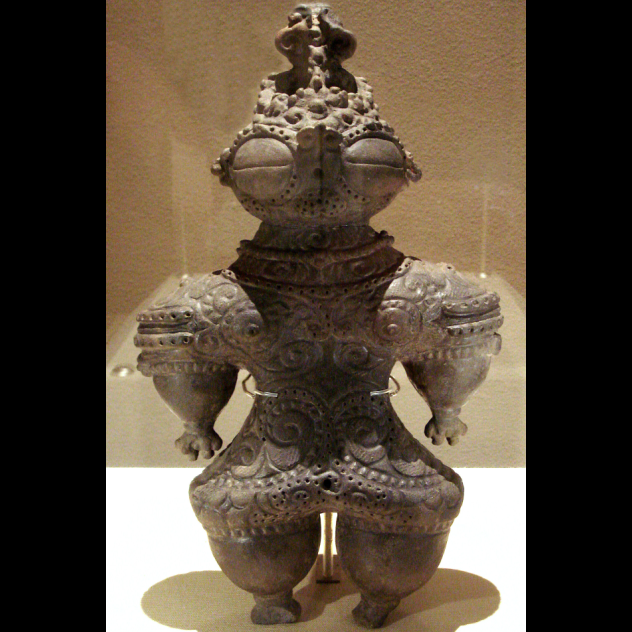 Some of the strangest pottery ever made must have belonged to the Jomon period of Japan that lasted from 14,000 to 300 BC. Because Japan was so abundant with food supplies at the time the population was able to form stable, sedentary communities that produced large amounts of pottery. Jomon pottery was marked by cords of string being pressed into the clay.

As well as decorated pots they also made figurines called Dogu. These human figures can be separated into several types. Some of them look like Horned Owls, others have heart-shaped heads, and others are Goggle-Eyed. It is these google-eyed figurines that have attracted the most attention.

The figurines in some cases look as if they are wearing ornate space suits and their goggle-eyes resemble helmets. They have been taken by some fringe theorists to be evidence of ancient alien visitors. The truth is that no one can say for sure what these figurines were used for – but they were the product of amazing ancient artists and not aliens.[10]