Sausages are amongst the most culturally ubiquitous foods on the planet, with different versions ranging from South America to the Far East. Living alongside ever present rice dishes, noodle-type things and cakes all over the world, you’d be hard pressed to find a region that doesn’t have some form of minced-animal-filled intestinal lining. But for every beloved wiener, frank and link that pretty much everyone can recognise, there are some strange and downright gross-sounding versions of the humble banger out there. Ones that often push the definition of ‘sausage’ to the limit.

So, for those of you planning to exit the world-wide lockdown by immediately going on a pork-tube tour of the earth, here’s a list of the 10 most strange sausages you’ll ever have the (mis)fortune of sampling on your travels.

Go into any quintessential American bar and what will you find to eat? Chicken wings, nachos and burgers. What about a traditional English pub? Pie and mash, roasts on a Sunday and scampi flavoured snacks that make your fingers small like unwashed balls. In Amsterdam, expect some Ossenworst with pickles to be served.

This beef sausage was originally made from Ox (the name means ‘oxen sausage’ in Dutch); this niche snack was popularised in the city by its Jewish citizens in the 1700s. It is made like many other sorts of sausage—ground meat mixed with flavourings and piped into an intestinal lining. The spices used are a little different from the norm, however—traditional spices from the Dutch East Indies like mace, nutmeg and cloves give the sausage a unique taste.

Just a nice-sounding, not all that crazy beef sausage, right? Why is it on a list of strange sausages?

Much like Chinese character tattoos that are explained by their owners as meaning ‘the indomitable power of the spirit of the lion’, when actually it just means ‘cat’, some people claim very special meanings for the various names given to Laotian sausages. They all basically mean the same thing—’stuff stuffed into other stuff’—so, a generic sausage.

That doesn’t mean that traditional Laotian style sausages are generic-tasting; they are anything but! Southeast Asian herbs and spices like galangal, lemongrass and fresh coriander are mixed in with the minced pork, beef or even water buffalo, all bulked out with sticky rice (as opposed to rusk, breadcrumbs or oats used in Western sausages). The sausages are also left for a few days to ferment, adding a tangy flavour.[2]

Longaniza is a Spanish sausage that is a close relative of the more famous chorizo, with a bit of a Portuguese ‘linguiça’-style sausage thrown in. This type of sausage is certainly popular in the Philippines, with a whole ton of regions, cities, towns and villages making their own unique variety of ‘Longganisa’, all served in different styles with various fillings.

They even base whole festivals around their regional variation of the cured meat sacks. A few quirky variations stand out—’Longganisa de Macao’ is not from China, or the island of Macao, but the Filipino city. It is, however, commonly used by the Chinese population in the Philippines, the meat infused with an anise liqueur. ‘Vigan Longganisa’ is from the town of Vigan. It is centainly not vegan; it’s a pork sausage flavoured with brown sugar, bay, garlic, vinegar, soy sauce and black pepper. Cebu has a sweet version, Alaminos city a garlicier variety. Guagua and Calumpit all have their own versions too. Almost everywhere in the Philippines have their own longganisa.

‘Fish Longganisa’ is also a speciality, made just like a traditional chorizo, but with fish—minced tilapia or milkfish, mixed with other traditional Longganisa flavourings. This fishy frank is often considered a healthier option than the pork, chicken and beef counterparts found on the islands.[3]

How to make “Kazy”

Have you ever been to a country park, seen a line of young children trundling along on the back of some horses on a pony track, led by some park employees, living out their princess/knight/cowboy/rich heiress fantasy and thought to yourself—’I wonder how those horses taste?’ Me neither…

In many places around the globe, like France and Japan, horse meat is eaten quite freely. In Central Asia, horse meat is packed into sausage form. Black pepper, garlic and cumin are added to the horse meat (sometimes rib meat, sometimes anus) and fat and, as per usual, packed into the animal’s intestinal lining. Given the heritage of the Uzbeks and Kazakhs, the Kyrgyz and the Tatars, curing the sausage for the food’s longevity is the way to go. The longer you leave it, the better (more pungent) it gets. So they claim.[4]

HOW TO MAKE: Spicy Goan Sausage

Chorise derives from Chorizo, introduced to the area by Portuguese colonists, but with a very Southern Indian twist—local coconut toddy vinegar—which gives it a unique, tangy flavour. Chorise are often a good deal spicier too, using the sort of chillies that will make your ancestors cry out in pain. The sausages are often served very similarly to chorizo, often cooked with rice into a pulao (close to a Spanish paella).[5]

10 Controversial Debates About Food And Cooking

Black pudding (pig blood sausage) is a very common element of the traditional ‘Full English’ cooked breakfast. A quick hop over the sea to Ireland and you’ll find a bloodless counterpart on your breakfast plate—the white pudding, anaemic cousin of the black pudding.

Also popular in Scotland, this breakfast staple is not merely a bloodless black pud—ground pork, more oats, more suet, herbs and spices makes it more reminiscent of a Scottish Haggis than a blood sausage. It’s a little bit like a meat pie filling without the pastry casing or a traditional turkey stuffing without the bird. But porkier, fattier and fried.[6]

Now we get to a real blood sausage. As opposed to the rich, deeply savoury Southern and Central European Black Puddings, Boudins and Jelitos, Scandinavian blood sausages are sweet. Very sweet.

Combining pig’s blood with fillers like barley and rye flour, some slightly more unusual additions like chunks of pig kidney and suet are added. Then the Danes go nuts—they add cinnamon, nutmeg, raisins and other dried fruit into the mix, sweetening the sausage quite a bit. It’s pretty much what would happen if a pig fell into the rolling machine at Cinnabon. If that doesn’t sound weird enough, a common accompaniment for the Norwegian version is syrup… jeez.

Still enjoyed in the cold Nordic wintertime, this mix of spices, sweetness and iron-heavy, rich blood is certainly a far cry from a dry turkey and roasted veggies.[7] 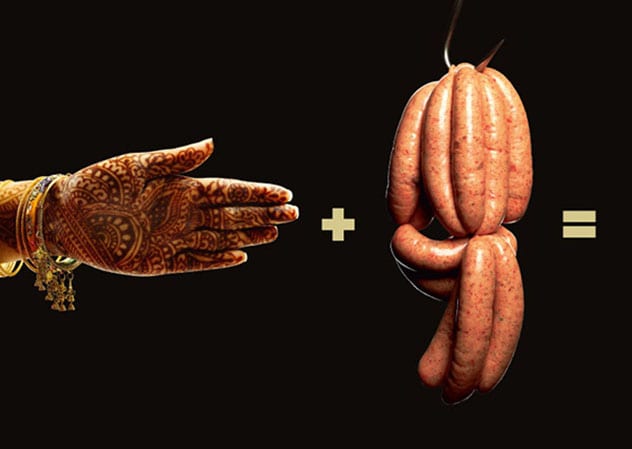 Another Indian twist on a European sausage, but not quite as old as the aforementioned Goan chorise. This time-honoured family recipe has been handed down for generations, finding its way into supermarkets all over Britain.

First created in the 1940s by butcher/chef to the Indian army, Harnam Singh, this is a spicy take on the traditional English banger (‘banger’ being the slang term for sausage in England) The ‘bangra’ created by the Singh family is a play on a play on words, combining the term ‘banger’ and ‘bhangra’, a traditional Punjabi folk dance.

Sweet onion, chilli, cardamom, coriander and garam masala are blended into the sausages, giving them a classically Indian flavour. Aside from the fusion of eastern and western flavours going on, the coolest thing about these bangers are the individually stamped henna-style tattoos on the sausages’ outer skins (made from edible dyes, don’t fret). So, if you ever fancied eating a round-the-world hippie tourist girl’s thumb, this is as close as you’ll get without breaking the law.[8]

If you had to pick the spiritual centre for sausage-making, it’d probably be Germany (sorry Spain, Poland, Italy and England, they win this one). From cured to cooked, smoked to spreadable, those Germans make a mean Frank. But with the sheer diversity found in this specific area of a nation’s gastronomy, you’re always going to find some weird outliers and acquired tastes.

Zungenwurst, or ‘tongue sausage’, is exactly as the name suggests—a sausage made with tongue. Whether you love or hate this old-fashioned pungent luncheon meat, moulding it into a sausage is a bit unusual. The more adventurous amongst you may think—’big whoop, it’s just tongue. I’ll try anything’. Then you’ll find out that it’s pickled tongues in the sausage. Then you’ll find out it’s best sliced thin and served cold. If that doesn;t leave you a bit green around the gills, you’ll realise that the filling also contains a liberal glug of pig blood, just for good measure.

Zungenwurst is not so much unusual so much as it is downright weird. Still, there are no grains or cereals to bulk it out—it’s 99.99% animal (with a few added spices for the remaining 0.01%). The protein levels must be through the roof.[9]

How to make Glamorgan Sausages – A Recipe with Hazel in Wales

If you are an adventurous gastronome who will use the entries on this list to take a global sausagey adventure for your taste buds, you may get pretty tired of all the meats you’ve just packed into your colon. Sure, the Filipino fish sausage gave you a break, but it’s made in exactly the same way as their meatier counterparts. Why can’t there be a radically different dish, but still a sausage? Enter Wales’ Glamorgan Sausage—a meatless, skinless sausage that is still a sausage… arguably.

Now, this won’t be a ‘healthier’ sausage option. In fact, these golden beauties are probably worse for your waistline. But, hot damn, are they delicious! Made from leeks (a national symbol in Wales) that are sautéed, gooey melted Caerffili cheese, hot mustard, fresh parsley and breadcrumbs, all shaped into plump sausage tubes and fried up in some butter. Despite being a ‘sausage’ in shape and name only, you’ll be thankful for a break from the horse anus and beef tongue. Bon appétit![10]

About The Author: CJ Phillips is a writer, actor and storyteller living in rural West Wales. He is a little obsessed with lists.