The internet is many things—useful, wonderful, surprising, frustrating—but above all, it’s impersonal. Anything there is to do on the internet you can do from your own home’s safety and obscurity. While operating in safety and obscurity can be useful, it can also be dangerous. If everyone’s identities are kept secret, then… everyone’s identities are kept secret. Your Tinder date might be Ted Cruz. That guy who bids on your old rice cooker might be the Son of Sam. That cute girl on Bumble might be your great aunt Janice. With that in mind, here are ten people who were definitely not who they claimed to be on the internet.

What Happened to Manti Te’o & His Fake Girlfriend?

2012 was a huge year for Manti Te’o. He was enrolled at Notre Dame, where he played linebacker for the Fighting Irish. He was nailing it, going on to win a slew of defensive awards and become a finalist for the Heisman. But on September 12 that year, tragedy struck. Te’o’s girlfriend Lennay Kekua passed away. Kekua had been in a car accident and, during her treatment, was diagnosed with leukemia, which claimed her life.

Te’o was crushed and he said so a lot. It got him a lot of press and a lot of sympathy. He kept saying how hard it had been… even after reporters uncovered that Te’o had received a call from Kekua, who was very much alive. Te’o gave at least four interviews after he learned that Kekua was still alive, in which he mentioned how much her death had motivated him.

But the second twist to this is that Kekua had never been alive. She was, in fact, a man named Ronaiah Tuiasosopo, who pretended to be Kekua. He fell in love with Te’o and, afraid of what his feelings meant about himself, pretended to be Kekua to lure Te’o into an online relationship. They never met in person because if they had, Manti Te’o would probably have noticed that his petite girlfriend was a fairly large man. 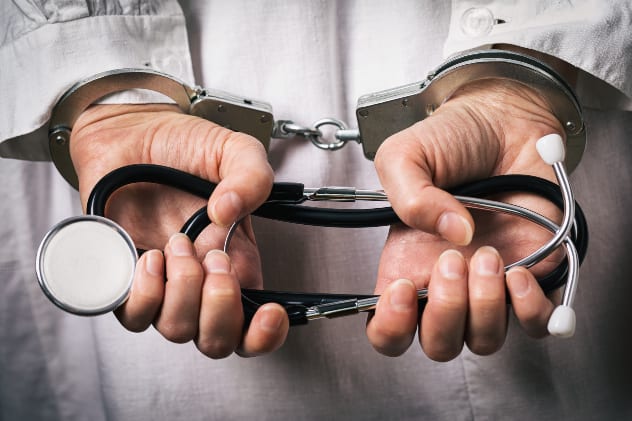 Buckle up. In 2008, Angela Buchanan messaged an unnamed friend, who we’ll call Jane. She told Jane that she, Angela, had breast cancer and was being seen by a local doctor. That doctor then messaged Jane and asked for her. They said that Angela’s cancer could be treated by increasing the levels of certain hormones in her body, and the best way to do that was by having sex.

Then, thanks to her non-gullible daughter, Jane began looking into the situation more. It came to light that the doctor who had messaged Jane was, in fact, Angela Buchanan. Angela had lied about having cancer, lied about going through a custody battle, and posed as a doctor online, all to trick Jane into a sexual relationship and marriage. Angela eventually confessed to the deception, but not before one twisted, sickening year of lies.

HE WAS KICKED OUT OF THE MILITARY FOR STEALING NUDES?

It’s short and sweet, but this one is about a member of Navy SEAL Team 6. Yeah, that Team 6. Just last year, Special Operator 1st Class Aaron Howard was discovered catfishing. Howard was accused of posing as two different people, including a nutritionist, to elicit lewd pictures from three different women. He was caught and sentenced to thirty days in the brig, plus a fine. This story is most notable because A) the catfisher is a member of perhaps the most disciplined fighting force in the world, and B) for some reason, this guy thought that nutritionists get all the action.

You might know actor Thomas Gibson from “Criminal Minds,” or before that “Dharma and Greg.” Around 2011, Gibson was a married man. But when contacted online by a woman who looked like she could be a porn star, Gibson seemed to forget his vows. He carried on an online romance with the woman for two years behind his wife’s back. One piece of this digital affair has been leaked online. It shows Gibson shirtless in a hot tub, telling his digi-mistress that he snuck away from his family to message her. It’s a bit sad to watch, and knowing the woman was fake makes it all the sadder.

6 ‘Dad, the CIA needs you to kill my cyber bullies.’

The Bizarre Case of Jenelle Potter

Jenelle Potter was almost universally described as a loner. She had trouble making friends in person, so when she finally befriended a woman named Tracy, Jenelle attached herself hard. She began dating Tracy’s cousin Jamie and befriended Tracy’s other friends Bill and Billie. Jenelle, however, secretly wanted to date Bill, not Jamie. Billie sensed these feelings, and the group became so filled with tension they decided not to hang out anymore. Around this time, Jenelle began being bullied online by an anonymous person. Coincidence? Probably not.

Jamie, Jenelle, and Jenelle’s parents—her dad was an ex-Marine—were all suspects, and the police managed to sort out the whole convoluted incident. It seems Jenelle had been posing as a secret CIA agent named Chris and messaging Jamie and her parents, claiming that they needed to protect her at all costs. Chris, that is to say, Jenelle, even convinced her father to shoot and kill Bill and Billie in order to protect her. She also got Jamie and her mother to help, and now thankfully, all four of them are in prison where Jenelle is, presumably, fairly protected. 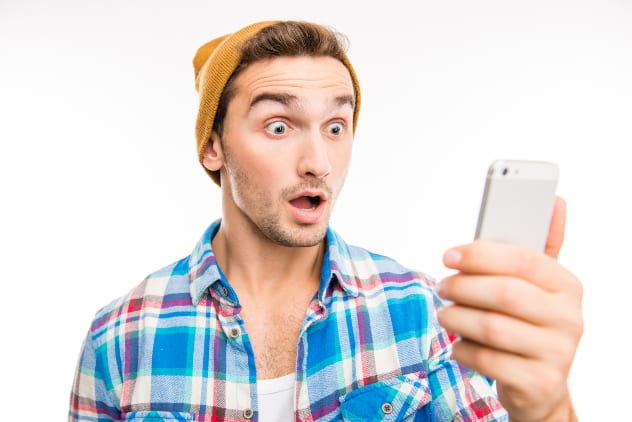 Another short one, but worth mentioning. In 2015, Jack Kennedy was swiping his way through Grindr. A simple, common occurrence. That is until he stumbled upon a profile whose pictures were… Jack Kennedy. Kennedy matched with the individual, and they struck up a conversation. The other profile sent Kennedy pictures to show himself off. Except every picture was Kennedy. Jack Kennedy was being shown off to Jack Kennedy. He replied, “That’s… literally me. What the living f**k.” The profile offered Kennedy proof of his identity. Kennedy accepted, ready for anything. What he got was just a picture of the male anatomy. This time, not Kennedy’s.

Was teen’s plot to kill aunt foiled by Facebook?

Marissa Williams was nineteen and acting out. She lived with her aunt but rarely listened to her. Williams would meet strange men online and invite them to her aunt’s house, day in and day out. When her aunt learned that Williams was meeting these men on Facebook, Williams responded by blocking her aunt’s account and continuing on. So the aunt got to work.

She created a profile for a fake man named Tre “Topdog” Ellis, which she used to spy on Williams. But the two got in contact, and Williams began sending strange messages to Topdog, such as when she offered to have sex with him if he paid her phone bill. Then it got worse. She messaged Topdog and asked him to save her from her unhappy home by killing her aunt. Williams even plotting the method for Topdog to sneak into her aunt’s room and murder her, her fiancé, and Williams’s cousin. As Williams was messaging her own aunt, she was caught and sent to prison. Thanks, Topdog.

Writing in to Vice, one user describes their childhood friendship with Lance Bass of N*SYNC. You already know where this is going. In the late 90s, the user frequented AOL chat rooms. One day they became excited to hear that angel-voiced heart-throb Lance Bass himself would be in the chat, personally answering fan questions. The user messaged Bass and got back an instant reply. They messaged back and forth. This lasted quite a long time. Bass told the user about life in N*SYNC and how the other guys were in person. The user was eventually forced to log off for the night.

The next day, Lance himself reignited the conversation. The next day, the same. Then on the fourth day of this miraculous new friendship, Lance messaged the user with an exclusive, friends-only offer: an advanced copy of the new N*SYNC album, weeks before any normal people could hear it. All Bass needed was a credit card and the user’s home address. Cue sad trombone riff.

To Catch a Predator Full Episode

“To Catch a Predator” has entertained millions for decades with its unique combination of comeuppance and voyeurism. The show brings offenders to justice, and we all get to watch, hungry for the moment Chris Hansen walks out of nowhere and says, “What is it you were hoping to do here?” An interesting aspect of that show is that its entire premise is based on catfishing.

Show staff pretended to be minors to encourage potential sex offenders to offend. A team of writers concocted backstories for scores of fake children, then posed as these children, inventing more and more details to lure predators to their prey. Though the term catfishing is relatively new, its use in mainstream entertainment is pretty old. The show has been catfishing potential baddies for seventeen years now, week after week. Not all catfishing is bad; sometimes, it’s entertainment gold.

This last story ends in love. Emma Perrier was a newly single woman looking for love online. When she started messaging back and forth with Ronnie Scicluna, she thought perhaps she had found it. They constantly messaged, charmed by each others’ stories and culture. She wanted to meet him badly. She begged. He always refused. Eventually, her friends and family warned her that he might be refusing for a reason. He might not exist. She took their advice and reverse image searched his photos. He was not Ronnie Scicluna at all, but rather a Turkish model named Adem Guzel. Emma confronted “Ronnie.” He denied it, but it was enough for Emma to begin her investigation.

Through a series of clever searches and cross-references, Emma was able to find Ronnie’s real name: Alan Stanley. She had to end the charade. She messaged Adem to warn him about his photos being used by a con artist. They messaged again and again. They hit off, fell in love, and moved in together. They found true love atop a mountain of lies. And Adem, an actor, ended up auditioning for the remake of “Aladdin,” perhaps the most famous catfishing story of all time.