All 50 states in the United States raise beef cattle, with Texas, Nebraska, and Kansas being the top three producers. It’s not surprising that beef cattle are such a widespread product. Annual revenue from cattle and calves is impressive. In 2020 alone, there were $62,013,996 in cash receipts. With so much money to be made, there’s often little question about the beef itself. But as delicious as it can be, it can be kind of gross…

If you have a weak stomach, maybe tread carefully with this one. Here are the top 10 grossest facts about beef.

10 Antibiotics in Beef Are Creating Superbugs 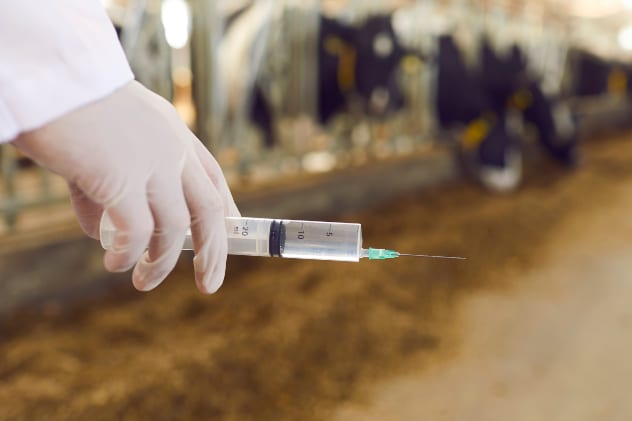 Farmers commonly use antibiotics in their livestock to prevent, treat, and control diseases by stopping the growth of bacteria. They also use it to make cows grow bigger, faster. The use of antibiotics can increase the amount of meat by 1%-2%. Additionally, about 50% more antibiotics are used on pigs and cows than on humans. The U.S. Department of Agriculture (USDA) has even found traces of harmful veterinary drugs in beef, including:

A USDA study has also posed concern that routine use of antibiotics contributes to antimicrobial-resistant pathogens. These stronger pathogens are commonly called “superbugs” and can cause negative effects on human health. Superbugs can be deadly for infants, seniors, or people with compromised immune systems. So, why do farmers need antibiotics to prevent disease? It’s because the conditions of factory farms are usually unhygienic due to overcrowding.

You know how you’re not supposed to go number two where you eat? Well…tell that to the cows. The cramped conditions mean diseases are easier to develop and spread among the cows. 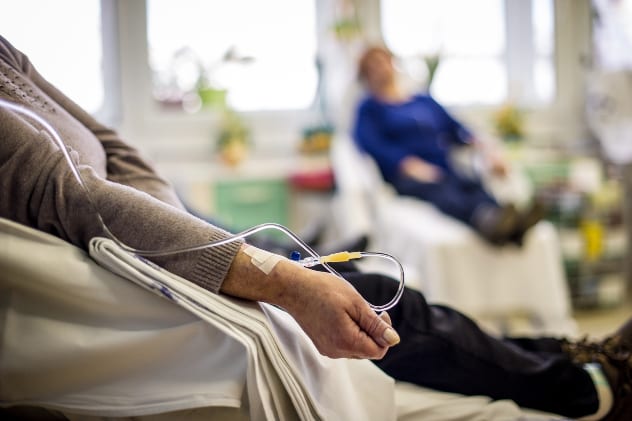 In 2007, the World Cancer Research Fund and American Institute for Cancer Research reported that red or processed meat, such as beef, are probable sources of cancers. There are various reasons linking beef to cancer. All the drugs listed above and hormones pumped into cows can increase your risk of cancer. The heme iron found in meat can also lead to damaged body cells that eventually cause cancer. Lastly, cooking your meat at high temperatures, such as over a grill, can create carcinogens. A carcinogen is a cancer-causing chemical that is dangerous to eat.

The most common cancer that can develop from eating red or processed meat is colorectal cancer. However, there are also links to:

Man, what a buzzkill. 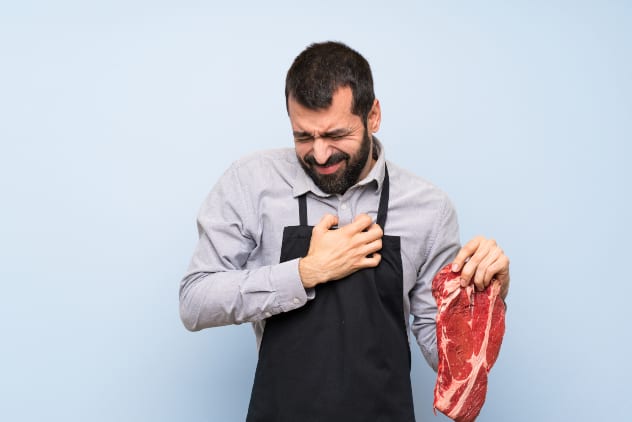 Many studies have found that consumption of red meats, such as beef, can lead to illnesses, including heart disease. High levels of saturated fat that exist in some red meats lead to increased blood cholesterol. Low-density lipoproteins (LDL) cholesterol is considered the “bad” type of cholesterol. It can increase the risk of heart disease. While eating leaner meat with less fat can help you avoid this, excess consumption of red meats is still risky.

Most manufacturers in the U.S. feed ractopamine to cows to produce leaner meat while speeding up weight gain. This drug ends up in our bodies when we eat beef. It’s actually so dangerous for humans that over 100 countries, including the European Union and China, banned ractopamine from animal farming and refuse to import U.S. meat. Health experts have linked ractopamine to health concerns in humans, such as anxiety and increased heart rates. 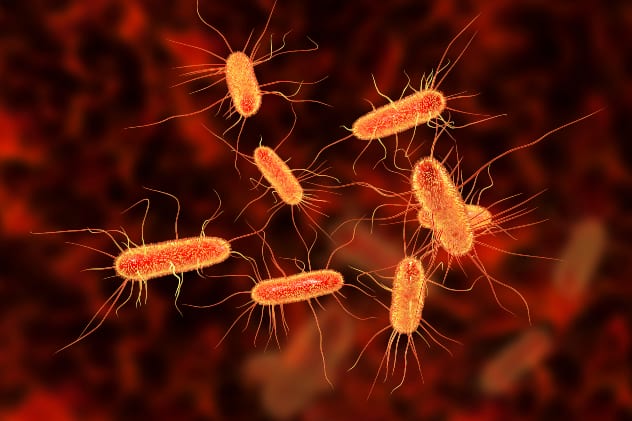 Since farmers pump so many antibiotics into cows, the meats they produce are often tough and chewy. Therefore, slaughterhouses mechanically tenderize the steaks and cuts of beef. The tenderizing process involves driving needles and blades into the meat. The gross thing is, this process pushes any bacteria on the meat’s surface into the flesh. So instead of cooking away bacteria when you sear your meat, you can end up with live bacteria still living inside of it. Blech.

Undercooked meat, such as rare or medium steaks, is especially risky to eat.

A common bacteria living on beef is E.coli. While not all types of E.coli can make you sick, the ones that do, cause various illnesses such as diarrhea, UTIs, and pneumonia. E.coli cases are still prevalent today and mostly transfer to humans from food. This bacteria can end up on the meat during slaughter or processing and be harder to cook away because of the tenderizing methods mentioned above. In April 2019, the Centers for Disease Control and Prevention (CDC) released a food safety alert on the following recalls for ground beef contaminated with E.coli: 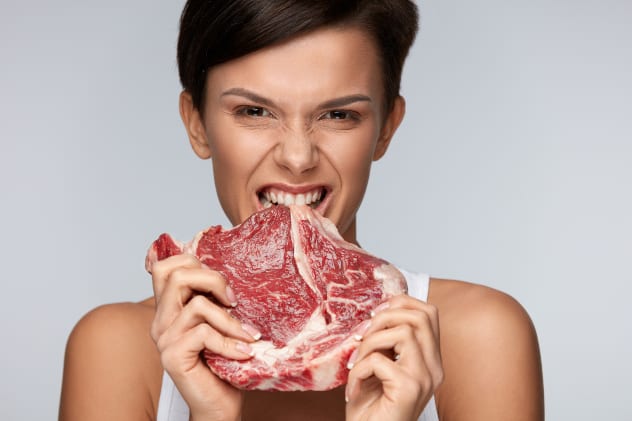 When we say “heavy metal beef,” we don’t mean an argument between guitar-shredding Metallica fans. We actually mean there are literal heavy metals in the beef.

The United States has no limits for heavy metals in its meat. For this reason, there are high levels of metals in beef, such as copper and arsenic. Because of this, most foreign countries refuse imported beef from America. For example, in 2008, due to high traces of copper, Mexico denied a shipment of U.S. beef.

While we need small amounts of copper to maintain good health, high traces can lead to liver damage. Our liver is crucial for filtering blood and detoxifying chemicals in our body. A severely damaged liver can lead to symptoms such as:

Arsenic is also present in non-organic animal feeding operations. It is a carcinogen fed to cattle and thus found in the beef we consume. In humans, arsenic can increase the risks of cancer, diabetes, and cardiovascular disease. Scientists tracked the diets of 63,257 people aged 45 to 74 for 11 years and found that consumption of red meat increased the risk of diabetes. The study found 5,207 new cases of Type 2 diabetes in the group tracked.

5 Toxic Pesticides End Up in Beef 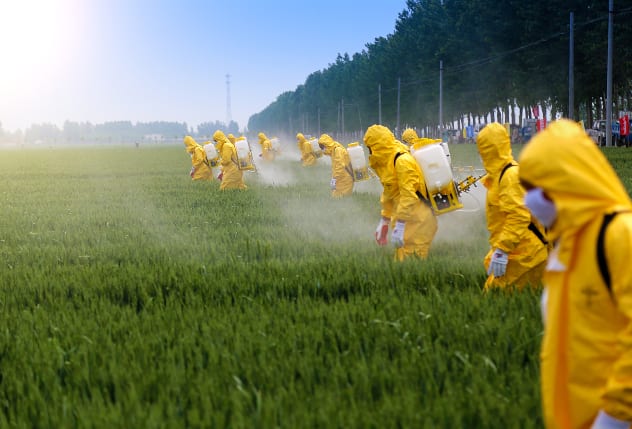 Many pesticides used on plants in the United States are toxic and end up in the food we eat. When animals, such as cows, eat pesticide-contaminated food in factory farms, it ends up in their system and part of their meat. Common pesticides found in beef include:

Pesticides can come with gross side effects. In the short term, it can cause symptoms such as rashes, nausea, diarrhea, dizziness, blisters, and stinging eyes. In the long term, it can lead to:

4 Some Beef is Bound With Meat-Glue 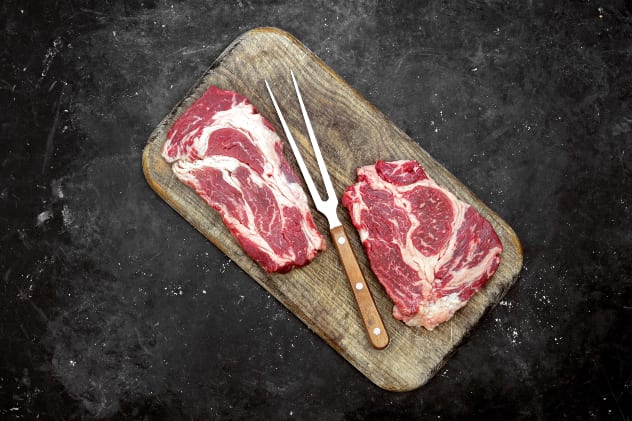 Although banned in the European Union in 2010, transglutaminase, also known as “meat glue,” is still commonly used in the United States. The U.S. Food & Drug Administration (FDA) classifies it as “generally recognized as safe.” Many processed food products will use meat glue to bind pieces of meat together. By creating more uniform pieces of meat, it can appear more appetizing to sell.

So what is meat glue? It is created using bacteria from a cow’s blood plasma. If that isn’t gross enough, there is also a greater risk of food poisoning from eating meat glued together. Not only do bacteria have a higher chance to grow on the separate pieces, but “glued beef” can also be harder to cook.

To keep the meat in supermarkets looking red, fresh-looking, and appetizing, manufacturers will treat the meat with carbon monoxide gas. This gas is injected into the meat to help prevent it from turning gray or brown. The FDA recognizes this gas as a color stabilizer to help maintain the typical red color of fresh meat. While it isn’t directly harmful to humans, it does mask how fresh the beef is. Without the naturally occurring discoloration, the beef might fool you into thinking it is fresh.

What an unpleasant surprise.

Generally, stores can sell packaged ground meat 28 days after the slaughter and solid cuts up to 35 days after leaving the manufacturer’s plant. If you don’t trust the sell-by date on the package, other ways to identify if the meat is spoiled and shouldn’t be consumed include:

Packaged beef that is temperature abused could also spoil before the use-by date, so knowing these signs are important. Additionally, carbon monoxide-treated beef can have a higher risk of growing salmonella. Michel Doyle, the director of the Center for Food Safety at the University of Georgia, found this out in a study with carbon monoxide treated meat stored in a refrigerator 10 degrees above the recommended temperature.

How to Make Sure the Ground Beef You Eat Is Safe

As disgusting as it may sound, your ground beef can definitely have poop. In 2015, Consumer Reports tested 300 packages of ground beef to see if there were bacteria in the meat. Meat from 103 stores in 26 cities across the United States tested positive for fecal contamination.

Since producers had ground up the meat, the testers found fecal bacteria spread throughout the entirety of the package. If you don’t cook your meat properly or if you touch anything around you after handling the raw meat, you can contaminate your surroundings. Bacteria showing fecal contamination can cause various illnesses, including urinary and blood infections. So make sure to be cleaning conscious.

How did the poop bacteria get in your meat, though? Well, the slaughtering and processing of large animals such as cows can be messy. For this reason, feces in the intestines or on hides can end up in the meat.

1 It’s Legal to Have Rat Hair in Ground Beef 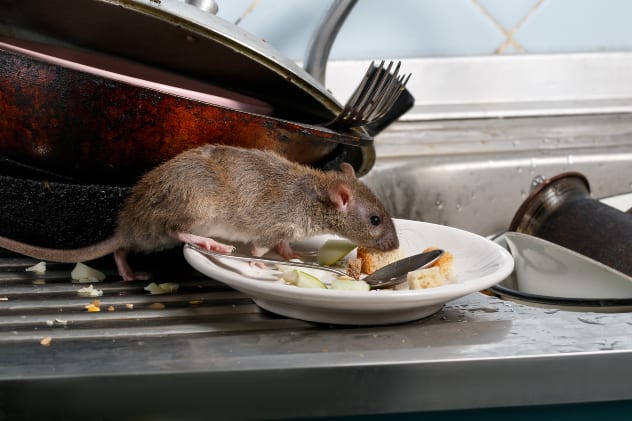 If fecal bacteria in your ground beef wasn’t bad enough, you might also have eaten meat with rat hair in it. In the United States, to qualify as meat, ground beef must legally include at least 35% of actual meat. The other 65% can be anything else, such as cornstarch, water, soy, maltodextrin, food colorings, or rat hair. According to FDA regulations, it’s okay for four rodent hairs to be present in every 100 grams of processed food, such as ground beef. So, this means when you eat your next burger or beef taco, you could have a furry addition.