Punxsutawney Phil will soon make his annual weather prediction for at least the 135th time from Gobbler’s Knob in the mountains northeast of Pittsburgh, Pennsylvania. On February 2, Phil will use the presence or absence of his shadow to foretell the early arrival of spring—or not, dooming us to another six weeks of winter.

His story, and that of other Punxsutawney Phil Wannabes, may have its roots in Candlemas, a long-ago Christian tradition when clergy would bless and hand out candles that indicated the length and weather pattern of that particular winter. (The candles were later replaced by hedgehogs and later still, groundhogs.) Some say the ritual occurs on February 2 since that is about halfway between winter and spring.

Others say Groundhog Day has its roots in a tradition that indicated if hedgehogs came out of their homes to catch insects on February 2, farmers were certain an early spring would occur. In any case, Groundhog Day events have been going on long before the 1993 movie Groundhog Day in which Bill Murray relives the same day several times until he gets his actions right.

With unbiased sources putting Punxsutawney Phil’s accuracy rate just shy of 40%, and the meteorologists on television being right up to 90% of the time…it is interesting how important the rodent and his forecast have become.

Over the years, Punxsutawney Phil has been the subject of arrest warrants in at least three different states after inaccurate weather predictions, calls for his retirement, inspiration for a lottery mascot, and at least 10 imposters that use the presence or absence of their shadow on February 2 to predict the next six weeks of weather. Read more about these 10 furry imposturous prognosticators below.

More than 40 years ago, a disc jockey in the central Ohio town of Marion told listeners about a groundhog “staring back at him.” A subsequent contest named the rodent, who lives in Green Camp, Ohio, when not serving as a meteorologist/ The contest winner’s suggestion: Buckeye Chuck.

By the end of the 1970s, he was the state’s official weather-predicting groundhog. These days, Buckeye Chuck provides his prediction to hosts of the same radio station that helped name him all those years ago. They then share the news while listeners feast on sandwiches and hot chocolate. As of his 2020 prognostication, Buckeye Chuck reportedly had a success rate of 67%.[1]

Look Out Phil for Chattanooga Chuck!

Chattanooga Chuck was adopted by the Tennessee Aquarium in 2009 from a licensed wildlife breeder. He made his first weather prediction the following February and soon began making appearances in programs that showcased his ability. When not predicting the weather, Chattanooga Chuck starred in educational programs that taught millions about rodents like him.

Unfortunately, he passed away in 2019 a few months before he could enter his second decade of weather predicting, yet his death at age 10 is much more than the six years a groundhog in the wild can sometimes live—a bit just a bit shorter than the 14 years those in captivity have lived. So far as we can tell, a replacement for Chattanooga Chuck has not been found.[2] 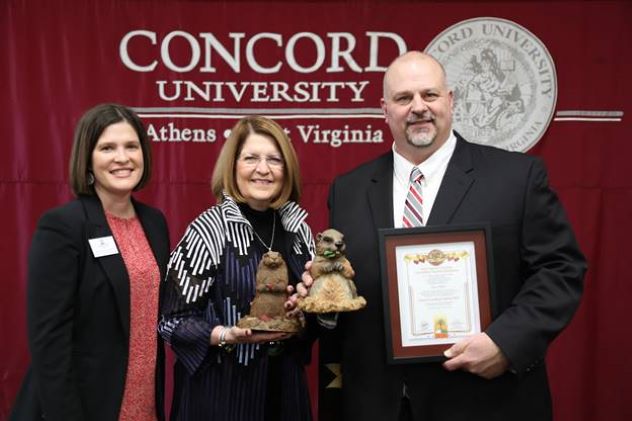 Concord Charlie has been predicting how long winter will last since 1978 when a faculty member of a university in West Virginia decided to turn a groundhog into a weather forecaster. These days, the rodent makes his prediction by cellphone or tweet in a conversation with the university’s president, and the latter announces the rodent’s thoughts.

Concord Charlie then seems to scamper away from the spotlight, turning the attention over to the university and a person “who has positively impacted life and culture in West Virginia” over the years, such as football coaches, elected leaders, and writers.[3]

Most groundhogs are still hibernating when the calendar page turns to February 2. Not so with the groundhogs on our list, like the next one, who has been making winter weather predictions for more than 40 years: General Beauregard Lee, who once called the Yellow River Game Ranch in Lilburn, Georgia, home but now calls Dauset Trails Nature Center in Jackson, Georgia, home.

He gets coaxed out of his hibernation with hash browns from a restaurant chain based in that state. As of a 2020 update, he reportedly had a 94% accuracy rate but has been known to lean on his distant cousin, Atlanta Braves AAA mascot Chopper, to make at least one of his predictions. No word if they split the hash browns when that happened…[4]

The annual weather forecasting event in Sun Prairie, Wisconsin, featuring Jimmy the Groundhog, began during the state’s 100th-anniversary celebrations in 1948. The location within the state was chosen because “the groundhog sees his shadow when the sun comes up on the prairie.”

Over the years, Jimmy the Groundhog has spurred changes to birth certificates and drinks and even inspired at least one stuffed-toy groundhog wedding. He also made headlines for more than just being a meteorologist when cameras captured him biting the mayor of Sun Prairie’s ear. Jimmy the Groundhog’s accuracy rate in predicting when spring will arrive is said to have been “extremely high” over the years. However, it remains uncertain how Sun Prairie’s decision to retire a wooden statue memorializing the rodent will have on his track record. Maybe he shouldn’t have bitten the mayor![5] 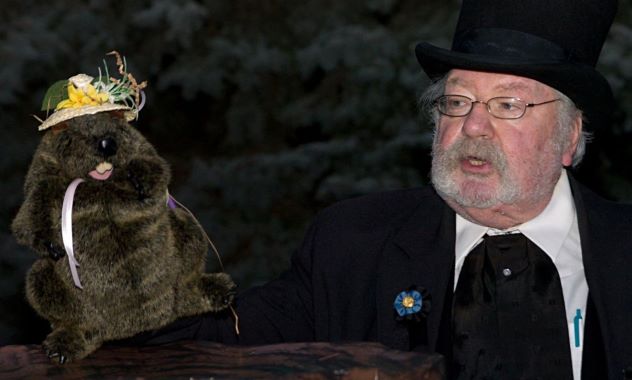 Mount Joy Minnie is a bit of a rarity in winter-weather foretelling. First of all, she is one of only a few groundhog girls to show off her weather prognostication skills. Secondly, she is a puppet who calls her home in southcentral Pennsylvania a tree stump constructed from chicken wire and papier-mache, forgoing the forest edges, meadows, open fields, roads, streams, and dense forests that most groundhogs call home.

Mount Joy Minnie, who made her first weather predictions in 2008, boasts an accuracy rating of 80% and appears recovered from when a mob angry at her prediction of six more weeks of winter “drowned and lynched” her.[6]

This rodent, whose handlers have celebrated Groundhog Day for more than 100 years, makes his home near Octoraro Creek in Quarryville, Pennsylvania. He has only taken two Groundhog Days off since 1908—the first was due to World War II, and the second was due to COVID-19.

Those who attend the annual event watch groundhog holes in and around Octoraro Creek for several hours before heading to a nearby lodge to receive Octoraro Orphie’s prediction. According to the Hibernating Governor of the Slumbering Groundhog Lodge, in 2020, Octoraro Orphie was tasked with some additional duties on that February 2. With the Super Bowl also being played on the same day, he set about predicting the weather in Miami for the game (not a hard task) and the winners (we’re sure he went with the AFC).[7]

Shubenacadie (pronounced “Shoo-ben-ack-a-dee”) Sam takes the longer part of his name from a park in Nova Scotia, Canada, where he lives. While he follows the vegetarian diet most groundhogs do, he also practices yoga and meditates. His home in the far eastern part of Canada offers him the distinction of being the first groundhog in North America to make a weather prediction each February 2 (LINK 72) and may explain his approximately 45% success rate.[8]

Taxidermied Unadilla Bill got his name when a former Nebraska lieutenant governor named Bill also named the municipality of Unadilla as the Groundhog Capital of the state in 1988. This was the same year that the rodent’s weather-forecasting career started.

However, the groundhog is at a crossroads in his life, having retired in the past year. If you are wondering how a stuffed rodent can be so tired (like we were), we hear that besides being a meteorologist, he often leads Unadilla’s annual Groundhog Day parade while sitting on the hood of a car. His successor, Unadilla Billie, is scheduled to make her first prediction this year.[9]

A groundhog calling itself Wiarton Willie is scheduled to make his 66th weather prediction this year. Located in southwestern Ontario, Canada, the town’s celebration has had several controversies over the years. Reports indicate Wiarton Willie died of a tooth abscess shortly before the 2021 weather foretelling ceremony, but local government leaders kept it a secret for months.

Perhaps no less controversially, some 20 years earlier, another Wiarton Willie froze to death shortly before his big day. Instead of having a weather prediction ceremony that year, town officials held a funeral for Wiarton Willie, but at the ceremonies, a stuffed version of the groundhog was used instead of the one that had recently passed. Let’s hope all goes well this year![10]