Language is constantly evolving, and this can make it hard to define what is correct and incorrect. Sometimes misunderstood words and phrases become so dominant that they become, well, not misunderstandings anymore. A divisive example of this is the word “literally,” which is often used to exaggerate something that is not really literal—as it’s an impossibility. Although some people rage against this, the figurative use of “literally” is in the dictionary. It has even been used by great writers such as F. Scott Fitzgerald and Charles Dickens. Literally.

Some of the sayings and idioms on this list are only minor deviations, while a few are technically wrong but, over time, have been accepted as correct. Others are changes so flagrant that they mangle the entire sense of the phrase. The next time someone misuses one of these sayings, you’ll be able to figuratively—or literally (it’s your choice)—blow their mind with the original meaning.

Friends: The One with the Moo Point

“Moot” is often misunderstood as “mute” in this phrase, or to take it a step further as Joey does in Friends, it’s “moo” because it is like a cow’s opinion (in that it doesn’t matter). But the word itself is not the only issue with this phrase because its meaning has also changed. Most people use it to mean an irrelevant argument that is not worth considering, but this usage, while popular, is a modern mistake.

The word “moot” dates back to at least the 11th century, where it was used in England to mean a meeting for judicial or legislative reasons. During the 16th century, a moot was an oral debate used for the examination of law students, like a mock trial. Following this, nowadays, it is supposed to be used to mean an issue that is uncertain and up for debate. In America, though, it is far more commonly associated with an irrelevant point.[1]

9 You Have Another Think Coming

Have you been getting a phrase wrong all your life? | BBC Ideas

People usually say “you have another thing coming,” but this developed from mishearing the original phrase “you have another think coming,” which originated in the early 19th century. It was intended to mean that you are wrong about something and need to think about it again. “Thing” is far more commonly used, though. The heavy metal band Judas Priest even released a song in 1982 called “You’ve Got Another Thing Comin’.”

This saying is known as an eggcorn, a phrase that has been altered but still makes sense within the same context. For instance, sometimes “Alzheimer’s disease” is referred to as “old-timers’ disease,” which semantically still makes sense. The term eggcorn was coined by linguist Geoffrey Pullum in response to an article by fellow linguist Mark Liberman about a woman who thought the word “acorn” was “eggcorn.”[2]

ONE FELL SWOOP – origin of the phrase | Grammar and Thongs

The common swapping of the original “fell” in this phrase for “foul” is another example of an eggcorn. Although “foul” is not the original word used and, therefore, is also incorrect, it is semantically sound. The word “fell,” which means cruel or terrible, is not commonly used in modern English, and “foul” carries a roughly similar meaning.

Shakespeare is often credited as the creator of this phrase by featuring it in Macbeth (1606), although he may just have popularized it. When Macduff learns that his entire family has been murdered in Act IV, Scene 3, he comments: “Did you say all? Oh hell-kite! All? / What, all my pretty chickens, and their dam / At one fell swoop?” The imagery of a bird of prey ransacking a nest of chickens may even be why people sometimes use “fowl” in this phrase.[3]

7 A Rolling Stone Gathers No Moss

This phrase inspired songs by Muddy Waters and Bob Dylan, as well as the name of the magazine Rolling Stone and the band The Rolling Stones. It has become the catchphrase of free-spirited travelers who like living a lifestyle without roots and of people who choose not to commit to a family or career. The phrase was originally not about the joy of freedom, though. Instead, it was about the weakness of being rootless.

The saying gained popularity during the early modern period (also known as the Renaissance) thanks to Erasmus’s Adagia, a collection of Greek and Latin proverbs first published in 1500. Erasmus continued to expand the work until his death in 1536, ultimately collecting 4,151 entries. In Adagia, the Latin phrase is Lapis obuolutus non obducitur musco, and the English is given as “The rowling ston neuer gathereth Mosse.”

The negative connotations of being rootless, or mossless, followed the phrase for hundreds of years. In J. R. R. Tolkien’s The Return of the King (1955), Gandalf describes Tom Bombadil as a “moss-gatherer” in contrast to himself as “a stone doomed to rolling.” But in contemporary usage, whether gathering moss is a benefit or a detriment is all down to one’s point of view. Fear of commitment versus a bohemian lifestyle, you decide.[4] 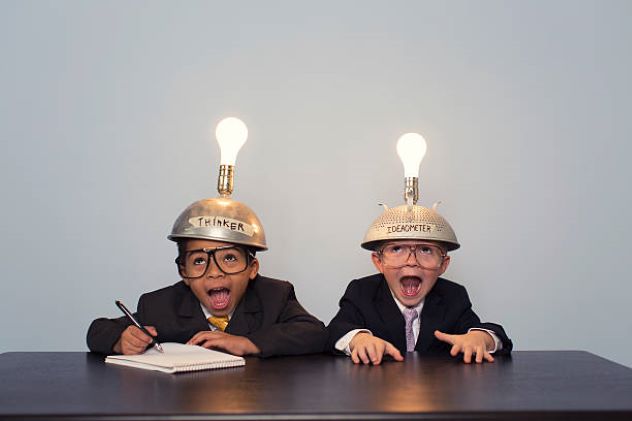 This saying can be traced back to the play Hans Beer Pot, His Invisible Comedy (1618), penned by the amusingly named Dabridgcourt Belchier. This play contains the line “Good wits doe jumpe,” with “jumpe” being used in the now-abandoned sense of “completely agree.” Over time, this eventually morphed into “great minds think alike.”

However, there is an additional part that can be added to the end of this idiom: “fools seldom differ.” The origin of this addition is unknown, although its sense dates back to at least the 18th century. In the second part of the political pamphlet The Rights of Man (1792), Thomas Paine, an English-born American Revolutionary, states, “I do not believe that any two men, on what are called doctrinal points, think alike who think at all. It is only those who have not thought that appear to agree.” “Fools seldom differ” is definitely snappier though.[5]

If you are a proponent of the correct “I couldn’t care less,” then hearing people wrongly say “I could care less” likely infuriates you. Usually, when this phrase is used, the person is trying to say that they do not care at all, but by saying “I could care less,” they are actually saying they do care a certain amount. It didn’t take long for this phrase to be mangled, with the original appearing in print in 1944 and the incorrect version cropping up just 11 years later.

Linguist Ben Zimmer explains that “Editors no longer resist printing “could care less,” despite its seeming illogicality. The fact is, this is simply how people talk, and contemporary newspapers seek to reflect that reality.” There have also been arguments made in favor of the phrase, such as its use as sarcasm and the fact that idioms do not need to make logical sense. I personally couldn’t care less about those arguments, though.[6]

“Ye Olde” most often appears on signs for businesses, like Ye Olde Sweete Shoppe, in an attempt to evoke a sense of medieval and early modern Britain. However, “ye olde” is entirely anachronistic. Spelling was not standardized during the medieval and early modern periods, but “olde” was not a common variation. A more accurate version would be “ole” or “auld.” For instance, the Scottish capital Edinburgh is nicknamed Auld Reekie.

A bigger issue is the use of “ye,” which should not be pronounced with the “y” sound. Abbreviations were often used when writing early modern English, so “the” was written as “þe,” employing the Old English letter thorn. This letter, which is pronounced “th,” often looked like the symbol for “y,” hence the modern-day confusion.[7]

Are you Begging the Question? – Gentleman Thinker

The phrase “begs the question” is often used to mean “raises the question,” but this meaning is due to a series of mistranslations. The saying comes from Aristotle’s On Sophistical Refutations, written around 350 BC and compiled by later scholars in 40 BC. Aristotle was describing the fallacy that occurs when an argument’s premise assumes the truth of the conclusion. More simply put, it describes circular reasoning. An example of this is that water is the best because it is the wettest. Something wet being the best is presupposed in this argument.

So, where does “begs the question” come into this? In the 16th century, Aristotle’s Greek phrase τὸ ἐν ἀρχῇ λαμβάνειν was translated into Latin as petitio principii and then into English as “begs the question.” However, an accurate translation is more like “assumes the conclusion.” The bad translation means that the phrase is very rarely used in the sense employed by Aristotle.[8]

So To Speak: Idioms – One Bad Apple Spoils the Barrel

Many people use “one bad apple” to mean that a single bad person is an outlier in a group of otherwise good people. But this idiom has been shortened over time, and in doing so, the original meaning has been twisted. The full saying is “one bad apple spoils the barrel,” meaning that the bad apple has a negative influence on the larger group. Bad apples do not exist in isolation; they infect the other apples around them.

This proverb dates back to the 1300s, with a version of it being found in “The Cook’s Tale” from Geoffrey Chaucer’s The Canterbury Tales (published between 1387 and 1400). In this story, Perkin, an apprentice chef, is fired because his bad behavior would infect his colleagues: “Wel bet is roten appul out of hoord / Than that it rotie al the remenaunt.” The phrase likely originated from the observable fact that a rotting apple really does quickly infect neighboring apples.[9]

1 Pull Yourself Up by Your Bootstraps

You’re Using ‘Pull Yourself Up By Your Bootstraps’ Wrong

Today, this phrase is often used to mean that success is possible without outside help. While this may seem like a motivational saying about the possibility of improving oneself, it falls apart if you just think about it. Is it physically possible to pull yourself up by your bootstraps? Unfortunately, no. And that is precisely the original meaning of this proverb: it is an impossible task.

This idiom is thought to originate from an 1834 newspaper in response to a man named Nimrod Murphree. He claimed to have discovered perpetual motion (obviously he hadn’t), the newspaper printed this snarky snippet: “Probably Mr. Murphree has succeeded in handing himself over the Cumberland river, or a barn yard fence, by the straps of his boots.”[10]