Millions of people across the globe wake up each morning to brighten their day with a delicious bowl of crunchy flakes or chewy oats with milk. Cereal is an American breakfast favorite, a fact made clear through television ads, commercial jingles, and the wide variety of textures, shapes, and flavors it comes in, even necessitating a designated aisle at the grocery store.

We’ve all grown up to Tony the Tiger’s growls of how Frosted Flakes are “G-R-R-REAT” and have been told of the “magically delicious” power of Lucky Charms since youth. But few go as far as to look into how some of these popular cereals were created or by what manner they came to land on our breakfast tables in the morning . . . until now. Here are ten cereals with strange and interesting backstories to interest the curious mind. 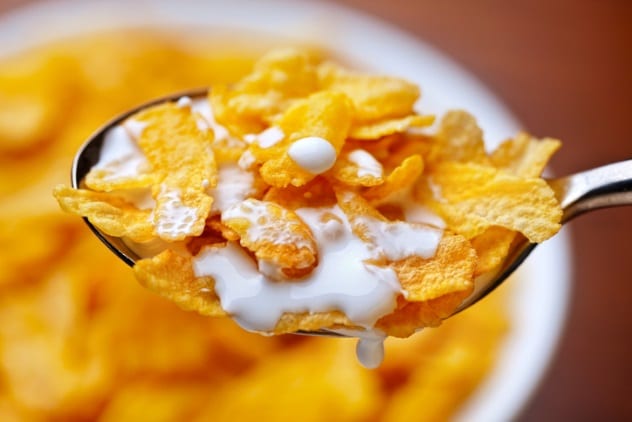 Kellogg reasoned that the overconsumption of “irritant” foods such as meat products was causing an increase in sexual desire and that a bland, grain-based diet that was easier to digest would suppress these urges, as well as cure their gastric symptoms.[1] At one point, Kellogg was boiling some wheat with the intention of making bread and accidentally left it out for a few hours. Due to costs, he decided to put it through the rolling process anyway and was surprised to see that the wheat rolled out into flakes. Upon toasting them and introducing them to patients, they were a smash hit. Thus, Corn Flakes were born. 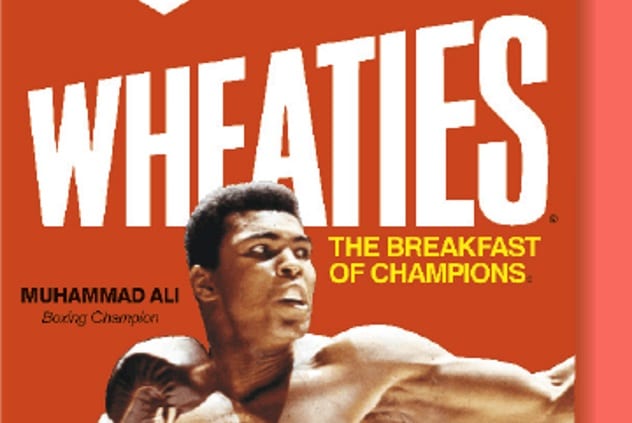 Another popular cereal that was also “discovered” by accident is none other than Wheaties. In 1921, a clinician at a sanitarium accidentally spilled some wheat gruel onto a stovetop while cooking. The mixture dried into flakes and attracted the interest of the Washburn Crosby Company. Inspired by the preparation process of Corn Flakes, George Cormack (the head miller) and the other employees tried 14 times with 36 different varieties of wheat to find the perfect combination of wheat, salt, sugar, and malt syrup.[2]

Their final product was called “Washburn’s Gold Medal Wheat Flakes,” which was later changed to just “Wheaties.” The cereal became popular due to their unique method of advertising, which was the first-ever radio commercial jingle. Later on, in 1928, the Washburn Crosby company would combine with three other nearby wheat mills to form the company we know as General Mills. 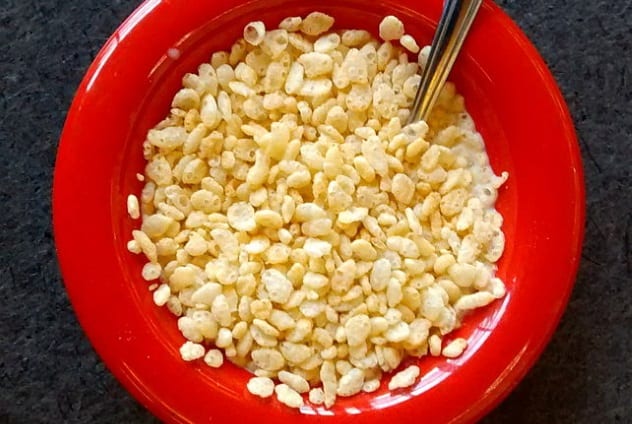 The story of Rice Krispies began in 1901, when a botanist named Alexander Pierre Anderson took an interest in what might happen when starch granules were brought to high heat. He theorized that the water inside the granules would turn to steam and result in small explosions, puffing up the starch. Upon experimentation, he was proven to be correct. Seeing potential in his discovery, Anderson then used a gas pipe and a sledgehammer to form a gun-like device that would simplify this process.[3]

After he demonstrated this to great success at the 1904 World’s Fair, the Quaker Oats company took much interest in Anderson’s concept. The company packaged and sold the puffed rice granules the machine produced as a cereal product. Part of its commercial success can be attributed to the puffed rice being marketed as “food shot from guns.” Later on, Kellogg’s would adapt this rice-puffing technology to form their own version, Rice Krispies. 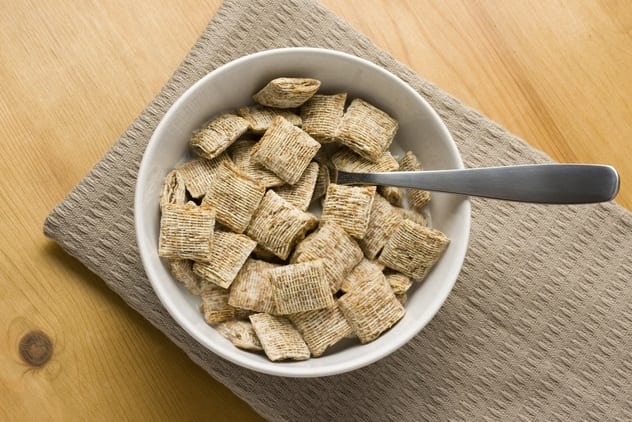 Henry Perky, an avid fan of grains, got the idea for Shredded Wheat in 1890 after noticing a diner in a hotel that he was staying at blending wheat with cream. The man was suffering from gastrointestinal issues. Inspired, Perky brought this idea to his companion, inventor William Henry Ford, and together they developed a machine that pressed wheat into strips, which were then webbed and woven into pillow-like biscuits. Interestingly enough, Perky chose to aim his product at vegetarian restaurants, which felt the biscuits would be effective as soup croutons.[4]

Cereal manufacturer John Harvey Kellogg admired Perky’s process but disliked the taste of his product and therefore declined to purchase the patent when offered. His loss! Perky went on to build a factory in Niagara Falls and form the Natural Foods Company, which soon became the Shredded Wheat Company, later to become part of Nabisco. 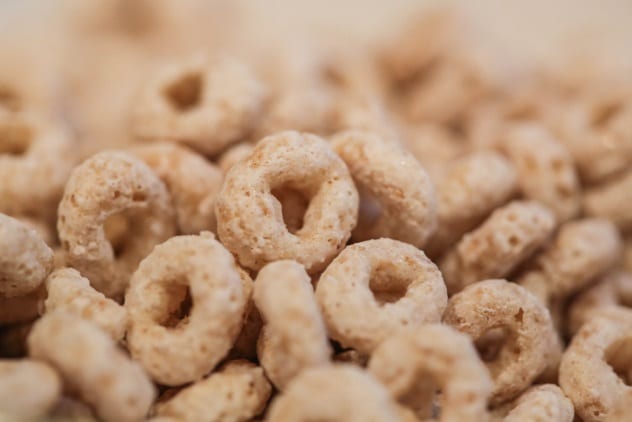 After the invention of Puffed Rice, Puffed Wheat, and soon after, Kix, puffed cereals were becoming all the rage in the late 1930s and early 1940s. General Mills wanted to experiment with an oat-based puffed cereal. General Mills food science innovator Lester Borchardt gathered a team to test the oat-based recipe and to develop tools that cut the mixture into a variety of different shapes. They tested over 500 formulas as well as tons of shape options, including “a sphere, a six-pointed star, a five-pointed star, a four-pointed star, a three-pointed star, a thin-walled doughnut, a thick-walled doughnut, a dumbbell, a spiral, and a square.”[5] The winner was the doughnut shape, known as a torus, as it fit best into packaging.

General Mills perfected and finally launched the cereal in 1941, as “CheeriOats.” However, this name was short-lived, as the Quaker Oats company quickly filed a lawsuit complaining of infringement on the use of the term “oats.” The cereal was re-released in 1945 as “Cheerios” and has been a top-selling cereal in the United States ever since. 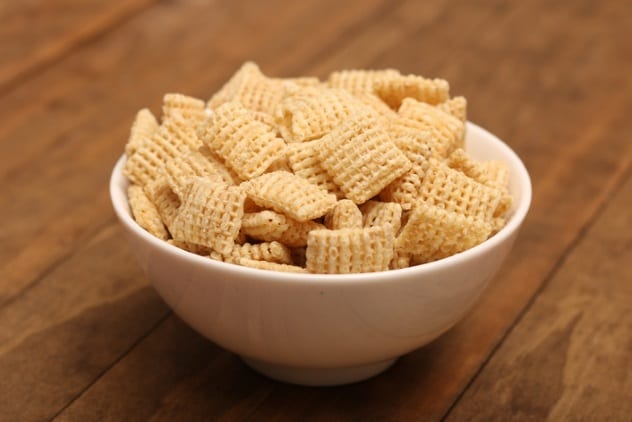 Chex was pioneered by a company known as Ralston Purina. It initially began as a pet food company headed by a man named William Danforth. Danforth soon partnered up with a self-help author named Webster Edgerly, who was looking to promote the consumption of whole grains. Edgerly was the founder of a very strict, almost cultlike social movement at the time known as Ralstonism, which, other than the promotion of a proper diet, held strange and absurd beliefs that delved into topics such as mind control and racial supremacy. Engerly advocated for the castration of all nonwhite individuals and also believed that watermelons were toxic to Caucasians. There were very specific routines and practices that followers were to obey, and since diet was such a major component of this system of belief, Edgerly wanted to create a unique whole-grain source designed for his followers.

Together, Danforth and Edgerly produced Shredded Ralston, a cereal made of small, bite-size squares of shredded wheat. After great success, the name of the cereal was changed in 1950 to Chex, to reflect Ralston Purina’s checkerboard logo.[6] Later, the company split, and while Danforth continued to produce pet food under the name Purina, Chex was sold to General Mills, which has produced it ever since. 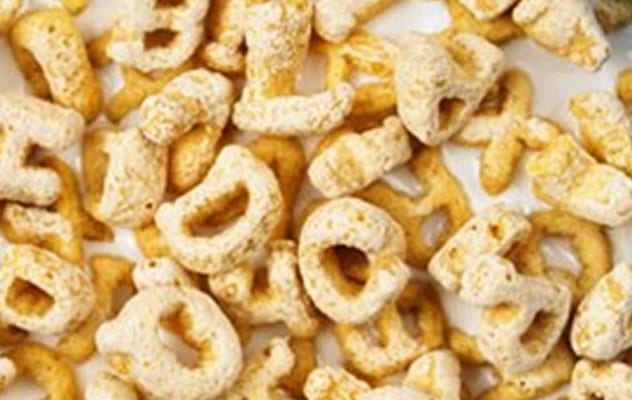 Alpha-Bits is particularly interesting in terms of its history, as there is some debate as to how the idea was originally conceived. The main story that is told is that in the 1950s, a worker for Post Cereals named Thomas Quigley was inspired after being challenged to design a new cereal to market to kids. Being a father of seven, he had a good understanding of what children liked and felt that making the cereal in the shape of letters would provide a fun and educational breakfast experience.[7]

However, alternative sources credit the creation of the cereal to then-head of product development Al Clausi. Being an Italian American, he was intrigued by the various shapes that pasta was produced in. He proposed the idea to run the cereal mixture through a machine designed to cut macaroni and then puff it afterward. The executives loved it, and Alpha-Bits were born. 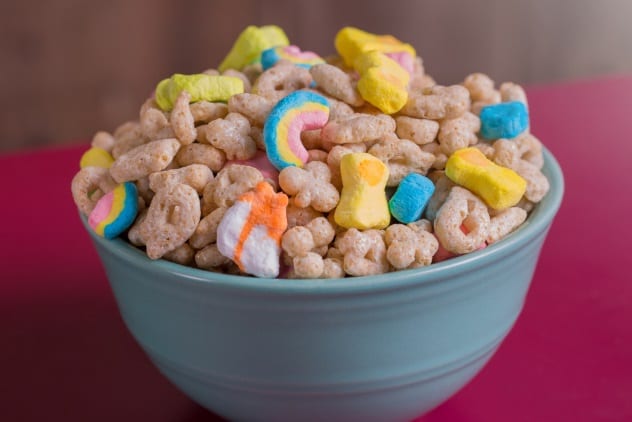 In 1964, General Mills management issued a challenge to all employees to create a unique cereal using the same manufacturing technology from their two best-selling cereals at the time: Cheerios and Wheaties. Product developer John Holahan was struck with inspiration upon his next trip to the grocery store. He decided to chop up pieces of marshmallow circus peanuts and mix them in with Cheerios. Not only did the executives love it, but given that it was the 1960s, their marketing team thought to take advantage of the popularity of charm bracelets among kids and teens.

The marshmallows, known as “marbits,”originally came as pink hearts, yellow moons, orange stars, and green clovers. When the cereal didn’t take off as planned, the Cheerio shape of the oat pieces were changed to bells, fish, arrowheads, clovers, and crosses and were also sugar-coated.[8] Since then, Lucky Charms has been an institution, with the “oat cereal and marshmallows” concept being the inspiration for many cereals down the line, such as General Mills’s “Monster Cereals” and various media-themed spin-offs. 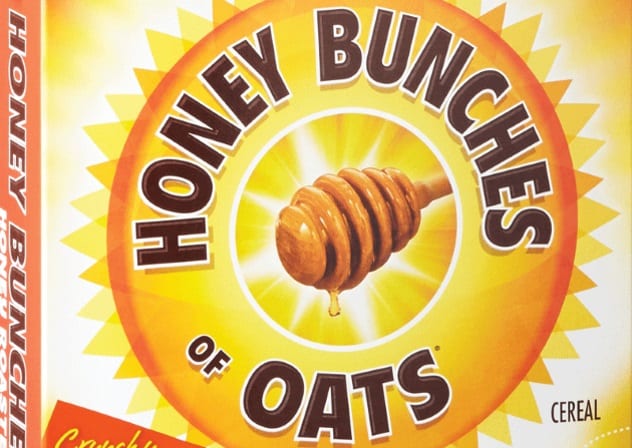 Honey Bunches of Oats debuted in 1989, after long-serving Post employee Vernon J. Herzing had the idea for a new cereal concept. Given his appreciation for Post’s three major flake-based cereals: Toasties, Grape-Nuts Flakes, and Sugar Sparkle Flakes, Herzing wondered as to how it would taste if he were to combine the three. He recruited his daughter Kimberly, and the two of them set out to mix and sample a myriad of different cereal combinations to find the best-tasting one. Herzing’s goal was to find one that made his daughter smile.[9] They found that adding clusters of granola added textural balance as well as a satisfying crunch.

When they brought their idea to Post executives, it was a hit. However, they were unsure what to call the cereal. Initially, they thought to call it “Battle Creek Cereal,” but while the public loved the concept of a mixed blend of cereal, they weren’t such a fan of the name. The brand manager for Post at the time, Eva Page, sampled it and said, “The cereal is exactly what it looks like, granola and flakes.” She took another bite and then asked, “To make it more exciting, can you put honey in the granola? And the granola is made with oats, right? So,” said Eva, “the concept is Honey Bunches of Oats and Flakes.”

As requested, honey was added to the granola, and the cereal was released in 1989, becoming the first of the combination flake-and-cluster cereals that we find today. Its success would inspire spin-offs from other cereal brands that included the addition of granola clusters, such as Cheerios Hearty Oat Crunch or Shreddies Granola Almond Crunch. 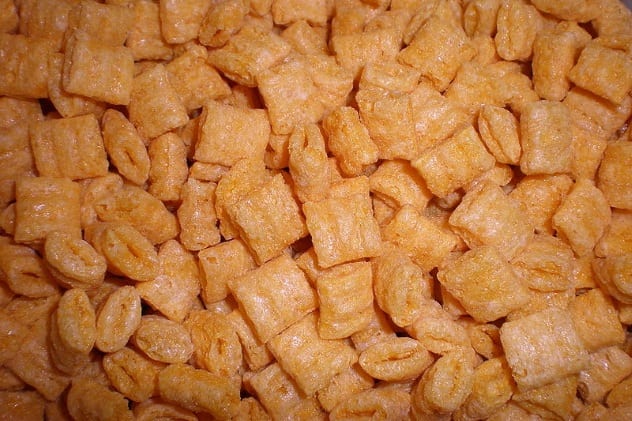 In the 1960s, cereal was primarily being marketed to kids, with some of the best-selling cereals being those with lots of sugar. After Post brought forth Kix, the first puffed corn cereal, surveys were showing that kids preferred cereal that would float and stay crunchy, versus cereal that would get soggy quickly. Quaker produced a new recipe that was a combination of corn and oat cereal, which was formed into small, yellow squares.

The key to the cereal, however, came with the help of flavorist Pamela Low. Low was inspired by a recipe that her grandmother used to serve her as a child: a brown sugar and butter sauce over rice.[10] She worked to recreate the recipe and then adapted it into what would become the coating for the new Quaker cereal. Low felt gave it a unique degree of what she described as “want-more-ishness.” This cereal was also one of the first to use oil in its coating, which required Quaker to innovate a unique baking process for production.

Quaker’s marketing chair teamed up with noted animator Jay Ward to create “Captain Horatio Magellan Crunch” (or just Cap’n Crunch, for short), a seafaring mascot he felt would further draw in kids while promoting the crunch factor of the cereal. Upon its launch in 1963, the cereal was a hit, becoming the second-best-selling cereal that year behind Frosted Flakes.