A series of portraits, dubbed the Crying Boy paintings, features a young ragamuffin with large eyes that meet the viewers to establish an instant connection. Complete with fresh tears streaming down his face, the perfectly captured expression of despair evokes a strong emotional reaction. The image was designed to pull at the heartstrings of its viewers, and it did just that.

The Crying Boy series gained fame in the UK, and other parts of the world, with thousands of prints purchased and displayed in homes and businesses. However, when terrifying events accompanied the paintings, many began to question if there was something sinister attached to them. Rumors spread of a curse that was so evil it destroyed its subject and creator and damaged the homes and lives of anyone who purchased one of the prints. Skeptics, on the other hand, provided other explanations. Many seem to have an opinion on this story, from urban legend and a cursed myth to media hysteria and a bid to sell more papers.

Decide what you believe about the curse after hearing these ten unsettling facts about the Crying Boy paintings.

10 The Artist Used a Pseudonym 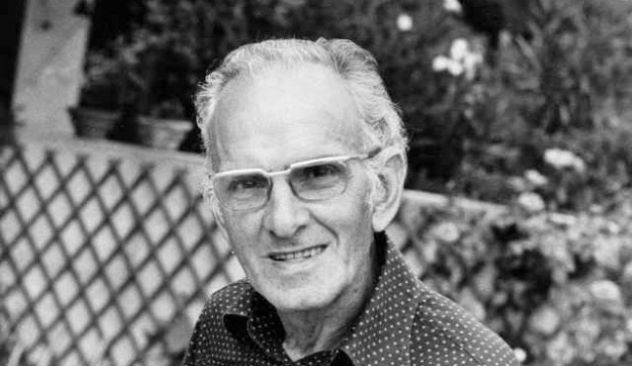 The Crying Boy paintings were signed by Giovanni Bragolin, an Italian painter who doesn’t really exist. The true artist was a Spanish painter named Bruno Amadio, although he was also known to go by Franchot Seville on occasion. Amadio was one of the most mysterious artists of the mid-1900s. He painted over 60 portraits in his Crying Boy collection from the ’50s through 1980, with each printed, reprinted, and widely distributed through mass productions. The prints became very popular, with over 50,000 copies purchased in the UK alone.

The Crying Boy series was the only artwork of Amadio’s that saw success. However, it was a double-edged sword for Amadio as the images—depicting horror, suffering, despair, and longing of the innocent—also brought about speculations of abuse. Many questioned whether Amadio “specifically frightened them, terrified them, and then painted them,” with some even going so far as to liken Amadio to the devil himself.[1]

9 The Subject Was an Orphan 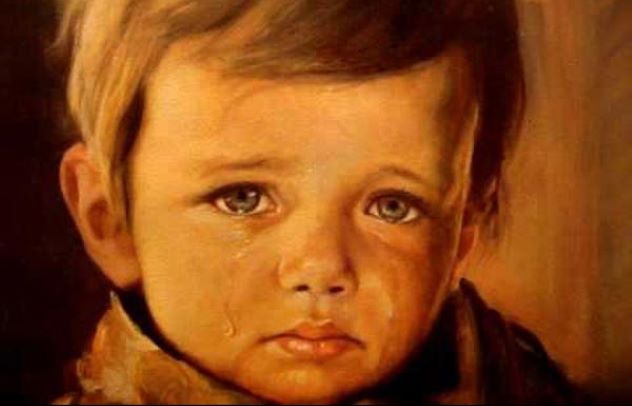 According to Amadio, the subject of one of his paintings was “a little street urchin” that he came across in Madrid in the 1960s. The young boy was a mute orphan with a sorrowful expression that instantly captivated the artist. Amadio had stopped to paint the child when a Catholic priest came over to issue him a stern warning. He said that the boy, named Don Bonillo, had run away after seeing his parents die in a fire.

Since then, fires of unknown origin would break out wherever the boy went. It happened with such frequency that he was given the nickname, “Diablo,” which translates to “devil.” The priest warned Amadio against having anything to do with the child. However, the painter ignored him and adopted the boy. He brought Don Bonillo home to live with him and painted the Crying Boy series.[2] 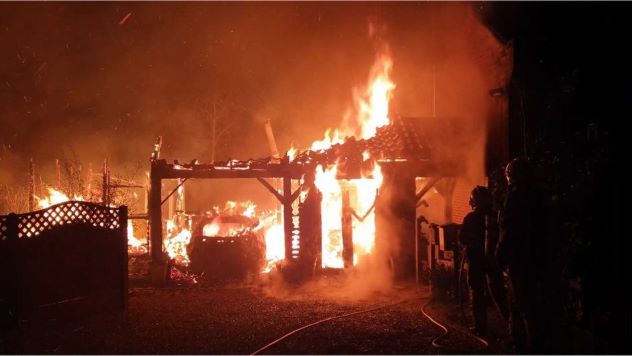 The unique relationship between the painter and his favorite subject came to a sudden fiery end when Amadio’s studio and apartment mysteriously caught on fire. He lost everything and, as a result, Amadio was ruined. He remembered the priest’s warnings and accused the boy of starting the blaze. He kicked him out and never saw Don Bonillo again.

The situation continued to worsen for Amadio when reports of the curse of the “Crying Boy” paintings started to spread across Europe. His fame quickly turned to suspicion, and he became known as a jinx. No one wanted to look at any of his paintings, let alone commission him to paint something new.[3]

7 Did the Subject Suffer a Tragic Death? 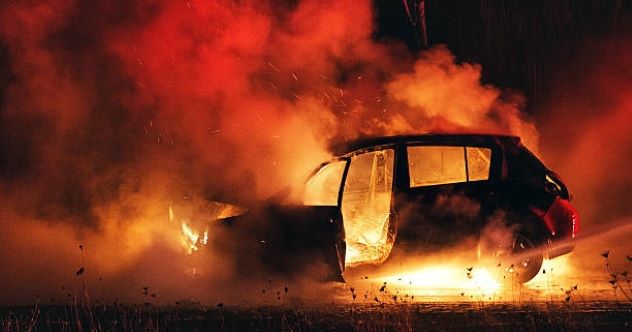 Unfortunately, Don Bonillo’s life ended much like it began: in a blaze of fire. In 1976, police responded to the report of a car crash on the outskirts of Barcelona. The car exploded after crashing into a wall. When officers arrived on the scene, they found that the driver had been burned beyond recognition. He was the only one in the car at the time of the crash.

Police officers searched the glove box, which survived the fire, and found part of a driver’s license. The name on the license revealed the victim to be Don Bonillo. For many, the fiery manner of his death served to add validity to the Crying Boy curse.[4]

6 The Prints Survived over 60 House Fires

The first reported house fire occurred at the home of Ron and Mary Hall in Rotherham in 1985. The fire destroyed everything on the first floor of their terraced council home, save for one item: a print of the Crying Boy that hung on their living room wall. During the fire, the painting fell from the wall, landed face down, and, strangely, was only slightly charred. Though the cause of the fire was found to be a chip pan (deep frying pan) that overheated and burst into flames, the couple became convinced that the painting was cursed and that it, not the pan, was to blame for the destruction of their home.

The Halls were not alone in their experience or theory. Many similar fires followed, with homes, and even a pizza parlor, falling victim to the curse. Despite starting from typical causes, each fire left behind a Crying Boy painting. The curse evolved to cause injury and death, with some people reporting accidents after purchasing the print. Many others were horrified to find they could not burn it when they tried.[5]

5 Firefighters Fail to Explain Why Paintings Did Not Burn 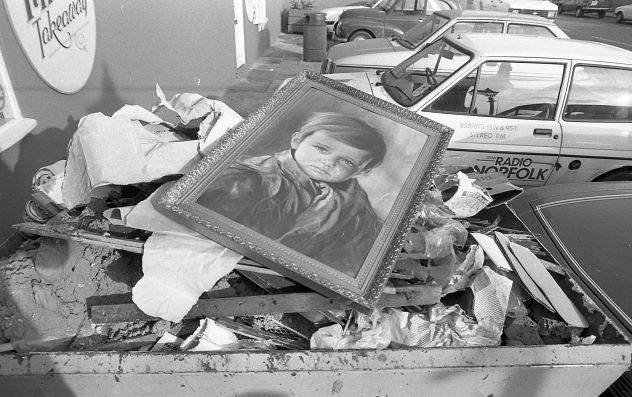 Fire service investigations pointed to discarded cigarettes, over-heated chip pans, and faulty wiring, leading firefighters to believe that the house fires resulted from human carelessness rather than a supernatural curse. Rotherham fire station officer Alan Wilkinson personally logged 50 fires where the Crying Boy paintings survived. Wilkinson was skeptical but could not explain how the artworks survived the flames. His wife, on the other hand, had her own theory: “I always say it’s the tears that put the fire out.”

Wilkinson’s disbelief in the curse did not save him from some superstitions. When presented with a framed print of the Crying Boy upon his retirement, he politely declined the gift. The widespread panic eventually led Chief Divisional Officer Mick Riley of the Yorkshire Fire Service to issue a statement meant to debunk the curse. “The reason why this picture has not always been destroyed in the fire is because it is printed on high-density hardboard, which is very difficult to ignite.” His statement did little to convince the public. Neither did the fact that the paintings were often of different children and even from different artists.[6]

4 An Article from a British Tabloid Started All the Fuss 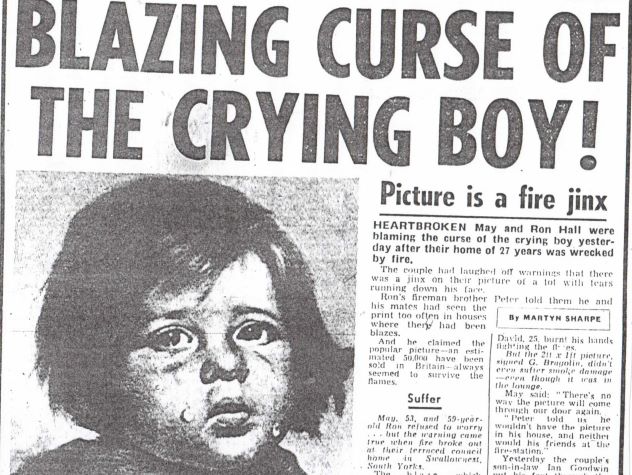 On September 4, 1985, the Crying Boy paintings received the first of what would be six weeks of news coverage with an article titled, “Blazing Curse of the Crying Boy.” Published on page 13 by a British tabloid newspaper called The Sun, it detailed the harrowing experience of the recent victims of a house fire: Ron and Mary Hall. A follow-up article on September 5 brought new terrifying stories from readers that claimed to be victims of the curse.

In addition to fires, injuries, and deaths, some accounts included supernatural occurrences, with readers alleging they saw the print sway from side to side on the wall or that it returned to its place after being destroyed. The Sun also claimed that the firefighters believed in the curse, despite conflicting statements by the fire service. Readers were captivated. Due to a wide-reaching audience, awareness of the “Crying Boy” curse spread very quickly. The Sun fanned the flames—no pun intended—with additional articles, each more sensational than the first. By the end of October, panic reached an all-time high, and many looked to The Sun for an answer.[7]

3 The Paintings Were Burned in a Mass Bonfire 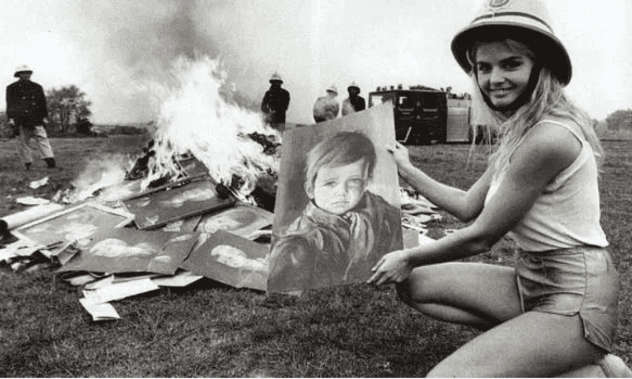 The Sun’s editor Kelvin MacKenzie, credited as the father of the “Crying Boy” curse, was the one to announce, “Enough is enough, folks. If you are worried about a Crying Boy picture hanging in YOUR home, send it to us immediately. We will destroy it for you—and that should see the back of any curse.” Soon, the Bouverie Street office of The Sun was overrun with Crying Boy paintings “stacked twelve feet high in the newsroom, spilling out of cupboards, and entirely filling a little-used interview room.” Readers had sent in about 2,500 copies of the print in total.

MacKenzie had to scramble for a solution to destroy all of the paintings. He eventually decided to burn them in a mass bonfire near the River Thames. In a highly-publicized event on Halloween, the paintings burned under the supervision of the fire brigade. The Sun put out an article with the headline “Crying Flame!” that claimed the curse was dissolved once and for all. It offered readers a reassuring quote from one of its police officer chaperones, “I think there will be many people who can breathe a little easier now.”[8]

2 The Materials May Have Had Something to Do With It

After the mass bonfire, talk of the curse died down but never really went away. British writer and comedian Steve Punt investigated the Crying Boy series in a “BBC Radio 4” production called “Punt Pi” some years later. Punt purchased a Crying Boy picture, then was “inexplicably delayed on his destination several times,” before attempting to burn the print with construction researcher Martin Shipp.

The two men found that beyond the string, the artwork didn’t really burn. Punt and Shipp surmised that a fire-retardant varnish was used. The test also explained how the string holding the painting on the wall would burn and cause it to fall face down on the floor. Another investigation suggested that Amadio’s use of a compression board could also explain why it was so difficult to burn.[9]

1 The Curse Became an Urban Legend

The Curse Of The Crying Boy Painting – English Urban Legends

Despite the various attempts to debunk the curse, people have continued to believe, leading it to become a full-fledged urban legend. One that has expanded to include paintings by different artists. For example, the portraits of Scottish artist Anna Zinkeisen similarly feature crying girls and boys and have often been attached to the “Crying Boy” curse. Season 3, Episode 4 of “Weird or What?” with William Shatner examined the legend of the paintings as recently as 2012. Different online groups also popped up, such as the Dutch “Crying Boy Fan Club,” but many have since disappeared. However, a forum on the Unexplained Mysteries website is still open for viewing. You can also find talk of the curse on social media. On February 2, 2022, Hanbury Arms Haunted Hotel & Museum posted that they currently have several Crying Boy paintings on display, proving that this urban legend isn’t going away anytime soon.

Esotericists argue that when an artist paints a portrait of a person, part of their soul is sealed on paper. People have created plenty of legends and lore about cursed paintings, some of which black magicians could even seal the person himself or tie his life to the portrait. In the case of these paintings, the faces of these children reflect them: wide-open eyes full of fear, resentment, despair, misunderstanding. The viewer’s heart breaks looking at them, so it is quite possible that the picture, after its completion, retained this energy. And through the painting, these small sitters took revenge on those who hung their images at home. But it’s just legend, right?[10]