When it comes to television genres, reality television is probably the least respected of them all. Whether it be because it makes unlikeable people into celebrities or has little to no redeeming value, many would consider it a genre not worth existing. Reality shows are simple in format as all they mainly must do is point a camera.

However, in order to keep people’s interests, they must find either someone or something that will draw in viewers. Unfortunately, this process has caused networks to create some of the most head-scratching and random reality shows to ever grace the small screen.

The Briefcase was a show that aimed to be seen as inspirational television. Instead, it wound up being torn apart for what many perceived to be its exploitation of the poor. The premise was that two families experiencing financial hardship would be given 101,000 dollars and then had to choose how much they would split with another family, unaware that the other family was also making the same choice. That is pretty much it. In all honesty, it sounds more boring than offensive.

The main problem with this scenario is that the family does not need to give away the full amount, just a portion of it. There is no real hard decision to be made, seeing as they could easily gift a decent amount of money and still have more than enough left over for themselves (which is exactly what every family did). With any semblance of hard decisions missing, you are essentially just watching people decide how much money they will give someone else. That doesn’t really offer a lot of excitement (if any).[1]

When it comes to dating shows, The Bachelor is probably the one to beat. It’s a fairly common setup. Boy meets girl, picks her over the others, rinse and repeat. But what if the bachelor was gay? This is the angle the makers of Boy Meets Boy decided to go with. But there was a catch: not all the contestants were actually gay. So the bachelor had to choose wisely, which was likely difficult as the bachelor was not told this little tidbit of information about those competing. This part of the show did not sit well with many people.

In attempting to separate itself from The Bachelor, it inadvertently offended. On the other hand, viewers probably spent more time trying to guess who was gay than they did focusing on the romance. Possibly more notorious than its perceived offensive nature was the reception to our bachelor’s best gal pal. If anything is remembered more from this show than its premise, it is her whining attitude and ridiculously overblown dramatic reaction to finding out that not all the contestants were gay, which she felt was a personal insult to her for some reason. This reaction was outright mocked on Mad TV due to its sheer ridiculousness.[2]

If you didn’t grow up in a Latin household, then the odds are that you’ve never heard of this. If you did grow up in such a household, you probably still haven’t heard of it. Hosted by famed Latin singer Pee Wee and airing on MTV Tr3s (essentially Latin MTV), the premise was uninspired to begin with. A person would learn a dance routine and then tell whomever the dance was for something they’ve wanted to say to them—essentially, a dance confession. Interspliced between the dances were comedy skits starring Pee Wee himself. If that sounds stupid and lame, I assure you it is.

Things take a more ridiculous turn when you see the kind of news that these people are breaking. You have simple ones such as a marriage proposal or even telling your mother you want to move out. But then you have one where an aspiring actress was conned out of 5,000 dollars by a phony agent who promised to put her in a movie. Cue the dance sequence because that’ll make breaking the news to your mother less embarrassing. It makes one wonder exactly who thought this format would work.[3]

Have you ever wondered what the life of a male escort was like? Well, then Gigolos may be the show for you. This Showtime series followed several male gigolos as they juggled everyday life and their job. Keep in mind that everyday life for them includes foursomes and swing sex. And in case you are wondering, yes, you do see them performing their jobs. However, this aspect is probably its most controversial.

It’s not provocative for depicting them sleeping with their clients. The actual controversy comes to whether it’s real or not. While we know that reality TV is prone to lying, you at least expect some level of realism when it comes to people’s jobs. Yet Gigolos has faced accusations of being fake. Reviewers pointed out that many “clients” had supposed jobs such as nurses and teachers, so why would they consent to be filmed with male escorts? One woman even claimed that she was paid to be filmed (essentially making it more porn than reality). While the gigolos may be real, their client list is up for debate.[4]

In many ways, Tool Academy represents the worst of reality game shows. While these types of competition shows tend to always have one or more despicable and unlikeable contestants, Tool Academy’s entire premise is built off this. Ten unlikeable and obnoxious men are tricked by their girlfriends into competing against other men to see who can reform themselves the best and become a good boyfriend. So, your premise is essentially built on relationships that are clearly not going to last. Might as well get some money out of it.

The men are made to compete in team-building exercises and attend therapy. The man who changed the most would then win the money and a shot at making their relationship work. Eventually, the producers decided to shake things up to make it more interesting. They introduced a gay woman into the mix. Instead of 10 men, you now also had one woman. This ploy didn’t help, and it wound up being their last season.[5]

Hypnotism has been seen as both controversial and therapeutic. It has been argued that it can lead to false memories, while others counter that it can help people do things such as quitting smoking or changing habits. Australian TV show Mesmerised aimed to offer nothing to this discussion by instead aiming for comedy. While you could have used the platform to show how it might help people, it was used for hijinks because that makes for more entertaining television.

Following hypnotist Peter Powers, the program sees him using his talent to set up various funny scenarios. The first episode has him hypnotizing a man into marrying an alpaca (yes, really). Other scenarios include trying to hypnotize an audience to unleash them as zombies and making a man think he was doing yoga with Kim Kardashian. Audiences weren’t buying it, and it was canceled after one episode (although it produced 6).[6]

No, this is not the newest Maury Povich or Jerry Springer reboot.

In fact, this may be one of TV’s most notorious flops. Facing backlash from the adoptive communities, this show is probably best remembered as late-night TV fodder more than anything. For those not in the know, the show followed a person who had been placed for adoption at birth. The setup was that they finally got to meet their biological father (not the mother, for some reason). However, they had to guess who their birth father was out of a lineup of men.

Fox executives clearly banked on this program to be more uplifting than its reception actually reflected. Many considered the show to be in bad taste. Adoption agencies accused it of being insensitive and exploitive. Whether it truly was offensive in nature or not, nobody was really fighting to keep this show on TV. It was canceled and is now mainly remembered as a punchline of ridiculous reality/game show ideas.[7]

Widely seen as one of the most controversial shows to ever exist, it only ranks at number three on this list. For those curious about the controversy, the program was about several women competing for a makeover that also involved some serious plastic surgery. I don’t really think I need to explain why it was controversial. Despite this debate, it still managed to get two seasons.

One must wonder just who decided to take the concept of plastic surgery and make it into a reality show. It’s not even much of a concept worth talking about. Its controversy is more interesting than the actual show itself. The premise is no different from most other makeover shows; it just includes plastic surgery this time. And even then, this isn’t the last show on this list that will feature that as a selling point.[8] 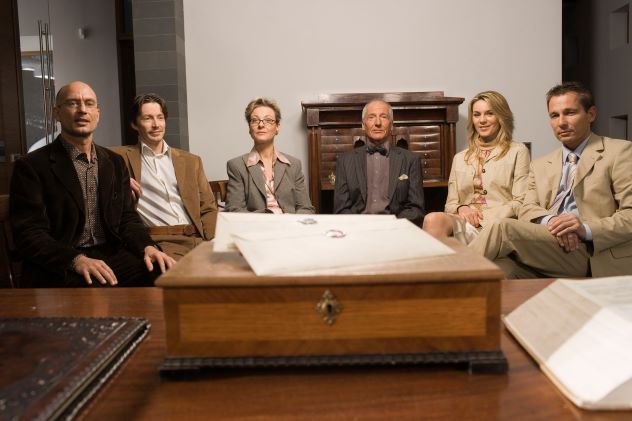 When it comes to a person’s passing, the will is possibly the most important aspect for some people. You’ve probably heard tales of family and friends turning on each other in the name of greed. So why not turn it into a reality show? This must have been the thought process behind the makers of the show The Will. If you guessed that the show revolved around people competing to win someone’s inheritance, then you guessed right.

Ten friends and family members competed against each other to earn the title of the sole beneficiary. In each episode, you watched as family members were cut out from the will one by one until only one remained. It’s not exactly the most feel-good television event. It didn’t draw in high ratings (because who really wants to watch this) and was canceled after one episode.[9]

While The Swan is more controversial than this one, I’d argue that Bridalplasty is the worse show. In it, we follow 12 brides and brides-to-be as they compete for their dream wedding and their dream plastic surgery. So essentially, we follow women who don’t feel good enough for their future husbands. What’s even harder to swallow is that instead of the men saying this was unnecessary, their husbands-to-be decide to let them compete for plastic surgery to please them.

Like Tool Academy, the premise seems to hinge on already unhealthy relationships. Married or not, it was clear these were people unhappy with how they looked, and the men apparently agreed with them. While the dream wedding played an aspect in the game, plastic surgery was the main selling point. Just like The Swan, it was also met with criticism for its concept. Unlike The Swan, however, Bridalplasty only managed to get one season.[10]