What could be more peaceful than a typical English village? Cottages with rose gardens, games of cricket followed by tea on the lawn as church bells ring in the distance. It’s an image that Agatha Christie took and turned on its head with her classic novels featuring murder and intrigue in the fictional village of St. Mary Mead. Readers are gripped by country crimes where the murderer is always caught, and life drifts back to normal.

In reality, city life may have its drawbacks, but evil still lurks in the most tranquil villages, and justice is not always served. These ten tragic cases of rural murder—some unsolved—really are stranger than fiction.

Related: 10 Startling Facts About Crime And Punishment In English History

Judith Roberts, 14, was cycling along a quiet country lane in her home village of Wigginton, Staffordshire, one evening in June 1972. Later that night, she was snatched from her green bicycle and beaten to death; her body was hidden in a field.

Andrew Evans was a soldier at nearby Whittington Barracks, and police questioned him as part of their routine inquiries. Evans was a troubled teenager who suffered from depression and anxiety and soon became fixated on the crime, even having vivid dreams that he had murdered Judith. Evans arrived at the police station asking to see a photo of the victim. Hours later, he had signed a confession claiming to be the killer.

Although he quickly retracted his statement, Evans was found guilty of Judith’s murder in 1973. He accused police of using a powerful sedative on him to extract a false confession. In 1997, the conviction was overturned, and Evans received nearly £1 million in compensation.

Judith Roberts’s murder remains unsolved, and many criminologists believe Peter Sutcliffe (aka The Yorkshire Ripper) is responsible. The serial killer, who died in 2020, regularly traveled through the remote village while working as a truck driver in the 1970s.[1]

A nurse left her elderly patient at his home on the night of January 7, 2004. The following day when she returned to wake 83-year-old retired Lieutenant Colonel Robert Workman, she found him lying dead in the open doorway of his remote cottage, killed by a single shotgun blast.

Police in the peaceful village of Furneux Pelham had no clue why anyone would want to kill the frail and lonely man. The only suspect was 24-year-old Christopher Docherty-Puncheon from a neighboring village, who had worked as a handyman for the Colonel. With no evidence, the case grew cold until Docherty-Puncheon was arrested for another murder in 2006.

In jail, Docherty-Puncheon told a cellmate that he had met the wealthy Colonel when he was hired to remove a wasps’ nest from his cottage. Soon, his relationship with the “generous” older man became sexual. He boasted to another prisoner that he had been paid to murder the war veteran, and this new information was passed to the police.

Docherty-Puncheon was found guilty of the Colonel’s murder in 2010 but he described the claims as “village gossip.”[2]

A tractor driver spotted a plastic sheet on farmland near the village of Cockley Cley, Norfolk. Wrapped inside was the headless body of a woman dressed in a frilly pink nightgown, her hands bound with rope. The sheet was stamped with the letters “NCR,” short for “National Cash Registers.” It was from one of the thousands of payroll machines in the country, but its exact location could not be confirmed.

Her nightdress was bought from British retailer Marks & Spencer in 1969, and the rope binding her hands was traced back to a factory in Scotland. The body—found in 1974—remained unidentified.

In 2008, the body was exhumed from its unmarked grave for further tests. An Isotopic analysis found that the victim had consumed water from Scotland, that her diet was mainly fish, and that she originated from Denmark or Germany.

Many locals believe the victim could be an eccentric figure known as “The Duchess,” a Danish sex worker based at the nearby Great Yarmouth docks, who had gone missing in 1974. She had lived in an old hut at the ferry port, which had direct links to Esbjerg in Denmark. No one knew her name or what had happened to her.

With no known relatives available for DNA testing, the identity of The Duchess remains a mystery.[3]

Josephine Backshall, a wife and mother from Maldon, Essex, was looking for part-time work. In the pre-internet world of 1974, she placed an advert in the local newspaper stating her qualifications, including:

“Own transport. Anything considered. Able to type.”

A man named Peter contacted Josephine, offering paid modeling work, and she went to meet him at 6 pm on October 29, 1974.

Josephine’s body was found 56 kilometers (35 miles) away near the village of Bury Green, Hertfordshire. She had been strangled and left in a ditch; her watch had stopped at 8:10 pm. “Peter” was never identified, despite witnesses describing a man seen with Josephine in the nearby village of Good Easter.

The case was reopened in 2010 and a 68-year-old local man was arrested but later released without charge.[4]

Late one night after Christmas 2013, a burglar broke into a house on Smuggler’s Lane in Bosham, West Sussex. Thinking the house would be empty, the intruder was looking for a safe containing cash and gold ingots. Instead, he was confronted by 55-year-old Valerie Graves, who was house-sitting over the holidays.

The next morning, Valerie’s visiting relatives found her body in a bedroom next to an unlocked door. She had been bludgeoned to death with a claw hammer. Residents of the village—where the TV drama Midsomer Murders was once filmed—were shocked by the killing. Police set up voluntary DNA screening and tested 5,000 people without success.

In 2019, a woman in Romania contacted police about her ex-husband, Cristian Sabou, whom she suspected could be involved. In 2013, the couple lived in the UK, and Sabou had worked as a handyman at the house where Valerie was killed.

Sabou was extradited to the UK and pleaded guilty to murder, for which he is currently serving life in prison.[5]

A murder from 1902 still draws visitors to the ancient village of Peasenhall in Suffolk. Twenty-three-year-old Rose Harsent was a housemaid at Providence House who was found murdered in the kitchen on June 1. Her throat had been cut, she had stab wounds to her chest, and her nightgown had been set alight with paraffin. Police searching her attic bedroom found letters arranging midnight meetings with an unknown lover. Rumors circulated that the man involved was William Gardiner, a lay preacher and father of six.

An autopsy found that Rose was pregnant and had been killed at midnight. Gardiner claimed he had been with neighbors at 11:30 pm that night, watching a summer storm light up the village.

Gardiner was arrested, and the trial began in November 1902. The jury failed to reach a verdict, and at the second trial in 1903, they still couldn’t decide. Gardiner was freed and is one of a few people to be tried for murder in England without a verdict being reached.[6] 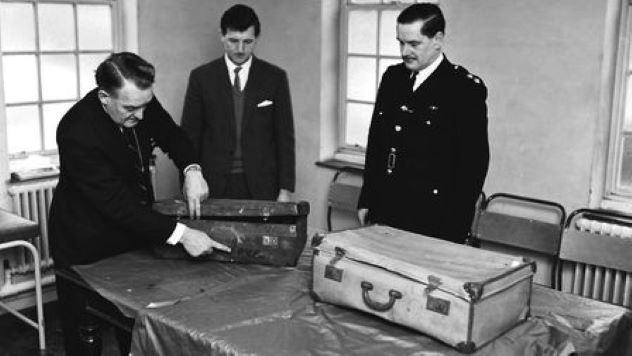 Bernard Oliver, 17, went missing from his London home on January 6, 1967. Ten days later and kilometers away in the village of Tattingstone, two suitcases were left at the side of a deserted road. A villager clearing hedgerows discovered the cases and their gruesome contents—a human body, sliced into eight parts. The unknown male victim had manicured hands and neatly folded clothes; one suitcase bore the initials “PVA.”

In a bid to identify the victim, police photographed the severed head, which was then splashed across national newspapers. Bernard’s brother saw the front page while traveling on a bus, and the family confirmed it was their son.

During the ten days he was missing, Bernard was seen in the village carrying two suitcases, while other witnesses placed him in London. Police believe Bernard fell victim to an organized pedophile ring, but no arrests have ever been made.[7]

The Mysterious Murders Of Alan And Brenda – True Crime

A white Cadillac-style car was a rare sight on the streets of Monkton, a village in Kent. Witnesses remember the vehicle winding through the narrow lanes until it reached a cottage belonging to Alan Leppard and Brenda Long. Two men got out and knocked at the door before driving off. When a second knock came at 10 pm, Alan opened the door and was blasted in the chest by a 12-bore shotgun. He died at Brenda’s side.

Several villagers described the two men in the car on the night of April 1, 1991, but the killers have never been traced.

Months later, Brenda was found dead in her bathtub clutching a bottle of pills in an apparent suicide.

A pathologist examining her body noticed a strong chemical odor and bruising around the nose. Tests found that Brenda had died after a cloth soaked in deadly ether was forcibly held to her face. Police believe the two murders are linked, but both remain unsolved.[8]

Seventeen-year-old Anne Noblett stepped off a bus at Cherry Tree Corner near Wheathampstead on a December night in 1957. A witness saw Anne enter the dark, winding lane leading to her home and noticed the taillights of a parked car. Anne was never seen alive again.

Thirty-two days later, her body was found seven miles away in Rose Grove Wood—she had been strangled, and her corpse was frozen solid. Police were baffled as the January weather had been unseasonably mild, and an earlier search of the woods with tracker dogs had found nothing.

Detectives theorized that Anne had been abducted from the lane, and her body had been stored in a deep freezer. The killer had taken her frozen body to the woods and staged a murder scene. Coins from her purse were found scattered around the area.

When Anne’s body was discovered, her clothing appeared untouched. However, on closer inspection, some garments had been buttoned incorrectly, and her glasses were hastily placed back on her face. Botanists measured the growth of wildflowers under and around the body and found she had been placed there two weeks earlier.

Local businesses with industrial sized freezers and even ice cream trucks were searched for forensic evidence, but the “Deep Freeze” murder has never been solved.[9]

Snow was falling in the village of Rettendon, Essex, as two farmers made their way down Workhouse Lane at 8 am on December 7, 1995. A Range Rover was blocking the narrow farm track, and inside they found three men who appeared to be asleep. On closer inspection, all three were dead, blasted at close range by a shotgun, in a scene later described by detectives as “carnage.”

The victims—Craig Rolfe, 26, Pat Tate, 37, and Tony Tucker, 38—were notorious crime lords from the nearby town of Basildon who controlled the local drug trade with violence and intimidation. How they met their deaths on a quiet country lane was a mystery until a man named Darren Nicholls came forward.

Nicholls was a driver for a drug importer named Michael Steele. On December 6, Nicholls drove him and his associate Jack Whomes to Rettendon for what he believed was a routine drug deal. The pair returned to the car with blood-stained hands, and Steele joked that he felt like an “angel of death.”

Nicholls’s information led to the arrest and conviction of both men for the triple execution. He now lives abroad under a new identity. Steele and Whomes have always denied any involvement.[10]