The Mona Lisa is not only the most famous painting by Leonardo da Vinci but also the most famous painting of all time. It is a cultural icon. It has hung in the bathroom of a king, been stolen, and recently had a cake thrown at it by a protestor. Luckily for the painting, it is now housed behind bullet- and bomb-proof glass because it is such a valuable item.

But no amount of glass can protect it from reinterpretation by other artists. Here are ten alternative versions of Leonardo’s masterwork—and some of them are very alternative indeed.

Related: 10 Rare Discoveries About Famous Artists And Their Art 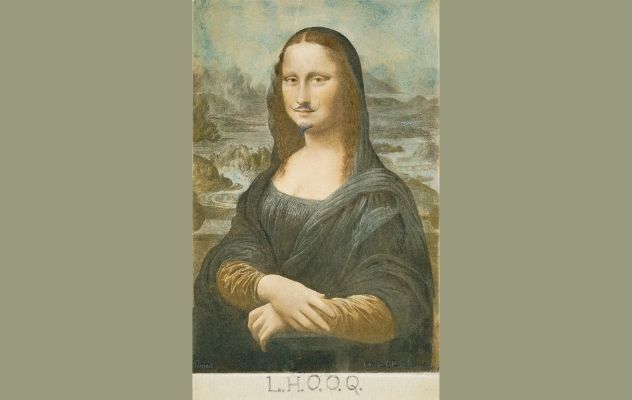 Marcel Duchamp scandalized and revolutionized the art world in the early 20th century when he began producing his “readymades.” He would take an everyday, mundane object and turn it into a work of art by placing it in an art gallery. Most famously, he took a urinal, turned it on its side, signed the name R. Mutt on it, and created a piece he called “Fountain.”

For his interpretation of the Mona Lisa, he used a postcard version of the painting and drew on a pointed mustache and small goatee beard. Under this, he labeled it L.H.O.O.Q. When these letters are read out in French, they sound like Ella a chaud au cul—meaning “She has a hot ass.”

Duchamp’s point was that no matter how great a work of art is perceived to be, it remains an object that can be played with.[1] 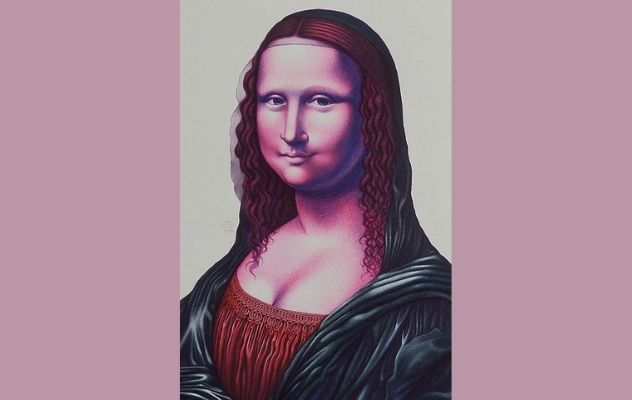 Everyone likes to doodle drawings now and then. But only one person is considered the “da Vinci of Doodlers.” Lennie Mace is regarded as a master with the ballpoint pen. Using nothing more than ordinary pens, he crafts illustrations and what he calls PENtings. His most famous work is Mona a’la Mace—a Mona Lisa in ballpoint.

Because of his facility with pens, Mace was commissioned by the Pilot pen company to create a version of the Mona Lisa. The work foregoes Leonardo’s muted palette for ones of vivid purple. Somehow using nothing but ballpoints, Mace was able to replicate the soft and smooth contours that are a trademark of Leonardo’s style.

Although Mona a’la Mace once hung in Pilot’s offices, its current whereabouts are unknown. Since the artist was paid many thousands of dollars to make it, it probably did not end up in the garbage like most doodles.[2] 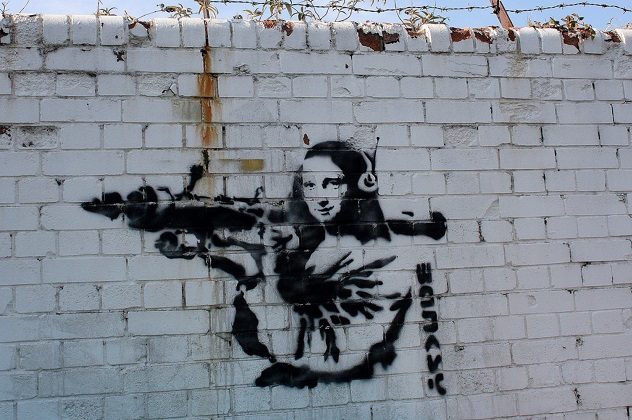 Banksy is the most famous street artist in the world. His graffiti often pops up in unexpected places, but it is rare for them to stay there for too long. His works can sell for millions. Entire walls have been taken out of buildings to allow the owners to sell their unexpected windfall.

In 2007, in Soho, London, Banksy created his take on the Mona Lisa. This time, instead of just holding the viewer with an enigmatic stare, the famous lady is shown holding a bazooka. By giving her a fearsome weapon, Mona Lisa’s subtle smile becomes maniacal. Is she smiling at the devastation she is about to unleash?

Not everyone is impressed by the juxtaposition of violence and sublime painting. One lady who spotted the work was heard to say, “Only boys with small d**ks paint pictures of big guns.”[3]

Leonardo da Vinci was a perfectionist. He was famous in his day for starting works and continuing to work on them for years, sometimes never completing them, as he strived to achieve his vision. The Mona Lisa may have been worked on from 1503 to 1517. Given the version in the Louvre took him so long, is it likely that Leonardo also created a second version? Some art historians think he did.

A copy of the Mona Lisa was bought in Italy in the 1780s and brought to Britain. It remained little known until 1913, when it was bought and displayed to the public. An article then appeared claiming that this version was also painted by Leonardo and was perhaps produced first. The next owner of the painting published a book that stated this was the only real Leonardo version—the one in the Louvre was just a copy by someone else. Coincidentally this would have made the painting he owned incredibly valuable.

Unfortunately for the current owners of the painting, there are a number of problems with attributing it to Leonardo. Leonardo painted on wooden boards, but the Isleworth Mona Lisa is painted on canvas.[4]

There are, unsurprisingly, many copies of the Mona Lisa. The one hanging in the Prado Museum in Madrid was thought to be just another of these for many years. However, when it was restored in 2012, experts were given the chance to reassess this painting, and they discovered something exciting.

The Prado Mona Lisa dates from around 1507 to 1516—exactly the time when Leonardo was producing his own work. When years of varnish and black overpainting were stripped back, the Prado Mona Lisa revealed its quality. In many ways, it is better preserved than the more famous Mona Lisa in the Louvre, and the details of the background are much clearer.

The Prado version is painted from a very slightly different angle than the Louvre version. It seems that this painting was made by an apprentice working beside Leonardo in the same studio. Who painted this Mona Lisa, however, remains a mystery as Leonardo had many assistants.[5]

‘Nude Mona Lisa’ could be work of da Vinci

One of Leonardo’s closest assistants, and possibly his lover, was called Salai. Salai was taught the art of painting by Leonardo though he never equaled his master in talent. Some have suggested he helped Leonardo in other ways—one theory is that Salai was the real model for the Mona Lisa.

Salai is linked to the Mona Lisa in other ways. It may be that he painted the version in the Prado. It may also be that after Leonardo’s death, it was Salai who inherited the Mona Lisa in the Louvre. We do know that Salai produced at least one version of the Mona Lisa called the Monna Vanna. In that painting, the model sits in the same position as the Mona Lisa but has exposed breasts.

The Monna Vanna, or Vain Woman, might not be the scandalous Leonardo knock-off it at first seems. A sketch of the Monna Vanna was apparently drawn by Leonardo himself. It also appears to be a drawing of Salai with breasts—did Leonardo create it as an homage to his handsome young assistant or as a sly joke?[6] 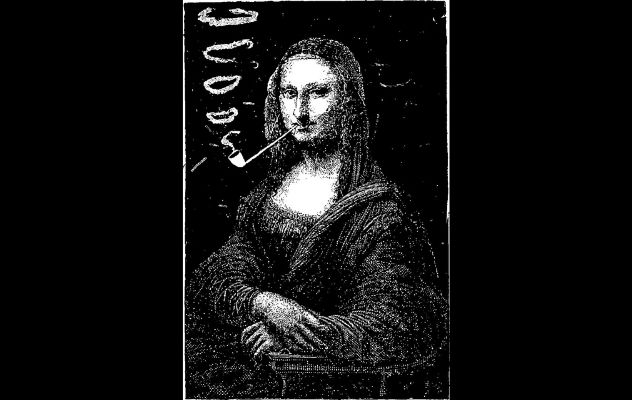 The Dada movement and the Surrealists changed art forever when they made their bizarre contributions, but in many ways, they were building on the work of other strange artists. In 1882, an exhibition was put on in Paris called Arts Incohérents. It featured only work by artists who didn’t know how to draw. It was a huge success and was repeated several times in the following years. One of the contributors was an artist known as Sapeck, real name Eugène Bataille.

Sapeck was known for his eccentricities that pre-empted performance art. He had a habit of walking around the city with his head painted blue. So it should perhaps not be surprising that his Mona Lisa was a little odd.

Sapeck’s Mona Lisa is shown smoking a pipe and puffing out rings of smoke.[7] 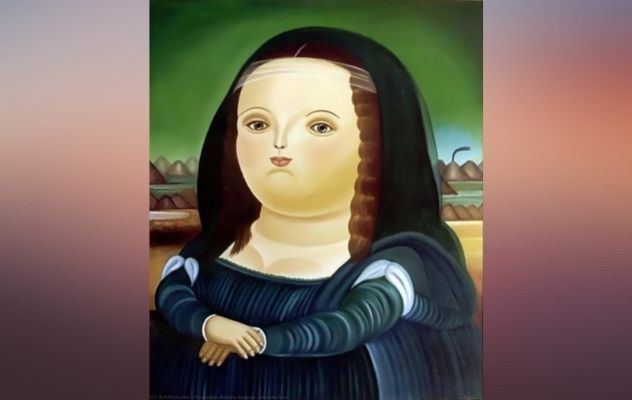 All artists cultivate a particular style to communicate their ideas. Fernando Botero certainly has style. As a painter and sculptor, Botero shows people that look as if they have been overinflated and are filling the space they’re in.

Botero’s Mona Lisa is not the delicate lady of Leonardo’s original but is instead a shapely, almost bulbous presence. Both have the same unknowable expression, though. How you interpret that look is probably very different depending on whether you are looking at a Botero or a Leonardo.

Botero has actually painted several versions of the Mona Lisa. One is called Mona Lisa, Age Twelve and shows the sitter as a sickly green young lady. Without the title, you might not even know who she was meant to be.[8] 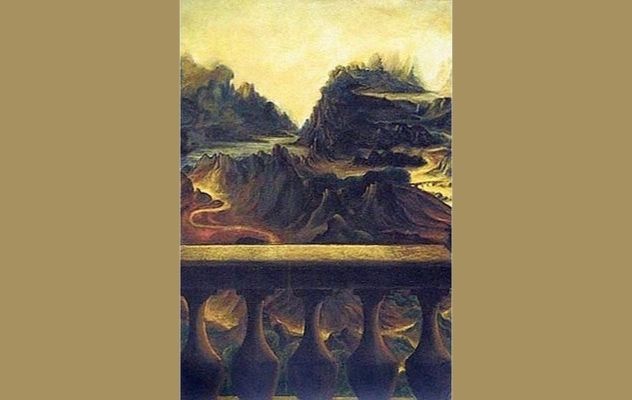 If anyone has seen the Mona Lisa, it is probably through a forest of tourists’ hands holding up their phones to snap a picture. It is hard to get up close to the painting, and when people do, they are often disappointed to find out the Mona Lisa is surprisingly small. Hardly anyone gets a chance to study the details. When you’re looking at her mouth, you don’t get much chance to look at the background. Behind Leonardo’s Mona Lisa is an imaginary landscape featuring mountains, paths, and a bridge.

Sophie Matisse is the great-granddaughter of the famous painter Henri Matisse, and she has created a series of works called “Be Back in 5 Minutes.” She takes famous works of art and removes the humans that would normally be in them. One of them shows off the gorgeous scenery that would be visible if only Mona Lisa would step out of the way.[9]

1 Self Portrait Mona Lisa by Dali 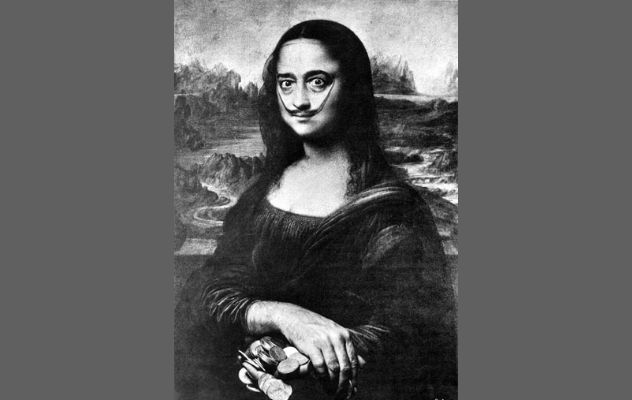 Salvador Dali was one of the great surrealists. His work is instantly recognizable for the dreamscapes he conjures up featuring melting clocks or spindle-legged elephants. However, Dali not only painted bizarre works of art but also turned his whole life into one weird performance. Not the least of his eccentricities was the pointed and upturned mustache he cultivated.

Dali’s mustache is somewhat similar to the facial hair Duchamp painted on his version of the Mona Lisa. This makes what Dali did somewhat meta. He not only put his mustache on his own upper lip, but he also put his whole face on the Mona Lisa. Dali appears looking swivel-eyed and clutching a pile of coins, perhaps to suggest the madness of the huge amounts paid for classic works of art.

How much is the real Mona Lisa worth? It’s impossible to say as it will never be sold. However, in 1962, it was assessed at $100 million, nearly $1 billion today. But since then, the art market has gone wild, and almost any estimate would be sure to be beaten if the Mona Lisa appeared at auction.[10]