Sometimes the details hidden throughout a film are what really elevate the overall viewing experience. Many are mere blips on the screen, while others linger for a bit longer. Some are intentional, meant to pay homage to someone or something else. Other unintentional details are missed in post-production and remain in the final cut, with fans eagerly searching for them.

On this list are just some examples of excellent details hidden in popular movies.

10 Silence of the Lambs

Silence of the Lambs is one of the creepiest movies ever made, thanks to an insane performance from Anthony Hopkins. The movie also has one of the most recognizable posters ever made, which features Clarice’s face with her mouth covered by a death’s head hawkmoth. However, you have to look really closely at this moth to see what exactly is on its back: a tiny reproduction of the Voluptas Mors photograph created by Salvador Dali and Philippe Halsman. The photo was taken in 1951 and depicts seven nude women arranged in the form of a skull.

This film is filled with so many little details that aficionados soak up, including a hint at Buffalo Bill’s whereabouts and the odd collection of things in his house. For example, the drawing in Hannibal’s cell of Italy’s Duoma showed the view of the landmark as seen from The Belvedere, a nod to the town in which Buffalo Bill lives—Belvedere, Ohio. And while walking through Bill’s home, note the array of things he has strewn around, including a quilt adorned with Nazi swastikas.[1]

Lost Highway is a truly weird film that sees two separate stories intertwining, with the women in both stories played by one actress, Patricia Arquette. This 1997 neo-noir film features an excellent soundtrack, even if the scenes are somewhat incoherent.

One of the stories follows the lives of a married couple played by Bill Pullman and Patricia Arquette. Pullman starts receiving VHS tapes of himself and his wife inside their home. As they sit on the couch and watch these tapes, three paintings can be seen on the wall behind them. After Arquette’s character dies, these paintings seem to turn upside down, which indicates the transition from the real world to a nightmare realm.[2]

Many movie lovers probably sighed when the latest Mortal Kombat movie was announced. After all, the first lot of movies was not exactly great. But the 2021 outing surprised even some critics, as it is pretty decent. And it’s packed with great easter eggs and homages for hard-core fans of the classic game too. These include the commands of “Fight!” and “Finish him! ” and the declarations of “Fatality” and “Flawless victory.”

In the scene where Sub-Zero wins his first fight against Jax, graffiti can be seen on the wall as Jax hunts for the ice warrior. This graffiti is none other than the button combos for Sub-Zero’s ice ball move in which he hurls ice at his enemy to freeze them for a couple of seconds.

The infamous ‘The Pit’ fighting stage is also recreated in the film which consists of a raised platform and a pit of spikes looming below.[3]

The movie is also known for having actual easter eggs hidden throughout. This was because the crew had an easter egg hunt on the set, and some of the eggs remained behind. One can be seen under Frank’s throne, another in the place of a light, and a third as the group takes the elevator to the lab.[4]

Gore Verbinski’s directorial debut was the slapstick comedy film Mouse Hunt, which was released in 1997. It was the first family film released by DreamWorks Pictures and also one of William Hickey’s final film roles before he passed away. While this is not the most talked-about film ever, it does contain an excellent easter egg that happens near the end of the movie:

A party is in full swing for the Smuntz brothers, and they are mingling with the guests. Ernie greets a couple of guests and then says “Hakuna Matata” to one of them. This phrase had gone viral just a few years earlier when The Lion King hit the big screen in 1994, and the wisecracking meerkat, Timon, explained what the words meant in the movie. Nathan Lane provided the voice of Timon and also played Ernie in Mouse Hunt.[5]

MIDSOMMAR: Every Creepy Little Detail Hidden In The Movie

Depending on what your idea of a freaky horror movie is, Midsommar will either bore you to tears or have you biting your nails and watching the screen through your fingers. This film is loaded with hidden details, however, that make for an interesting watch.

At the beginning of the movie, an eerie-looking tapestry can be seen that seemingly depicts the annual change from winter to summer. But it soon becomes clear that there is much more going on than just the passing of the seasons. Instead, the characters from the film can be seen in each stage, acting out their scenes that eventually play out. This means that everything happening to them is as inevitable as the changing seasons.

And some hidden details are even creepier. In the scene where the Hargas carry Dani to dinner, have a look at the trees in the background. Among them, you will see a face with a tube coming from its mouth, which is a depiction of how Dani’s sister dies at the beginning of the film.[6] 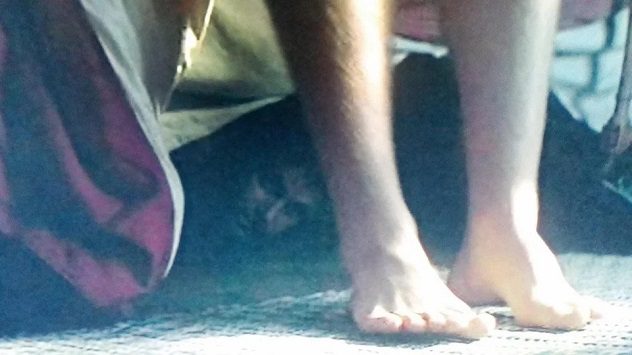 The 2003 comedy Stuck on You, starring Greg Kinnear, Matt Damon, and Cher, tells the hilarious story of conjoined twins who are known for being the fastest grill cooks in town. The twins’ conflicting dreams for the future make for some funny scenes, and the movie generally received favorable reviews.

What is truly unexpected, however, is the hidden detail right at the beginning of the movie when the twins get out of bed. Under the base of the bed, a human face can be seen peering directly toward the camera. While it is pretty well known that it was one of the executive producers who hid under the bed as a prank, it is a pretty jarring image, especially for a comedy film.[7]

For a movie released in 1973, The Exorcist is still creepy as hell. Possessed Regan still makes for a terrifying image, and the pea soup vomit is still nasty. Not to mention the frightening upside-down spider crawl down the stairs.

There are a plethora of small details throughout the film too. Some are creepier than others. For example, the banner hung over the doorway in the language lab has the word TASUKETE! written on it in red. Tasukete translates to “help me” in Japanese, and the same word is later carved into Regan’s stomach.

The demon that takes over Regan’s body is also revealed throughout, with its face superimposed over several objects and scenes for a split second. Another creepy detail reveals itself when Father Karras tumbles down the stairs, and the words “Fight Pigs” appear as graffiti to the left of the staircase. This is a clear reference to Jesus exorcising demons into a herd of pigs, and Karras does a similar thing by exorcising the demon into himself.[8]

20 Things You Somehow Missed In Titanic

The 1997 blockbuster Titanic might be melodramatic in parts, but it still starkly depicts one of the biggest tragedies in human history. The many “what-if” scenarios make it even worse.

The film made a big splash in cinemas and also contains a lot of details and easter eggs that not everyone caught the first time around. For instance, the scene where two men stand watching a boy play on the deck is a direct recreation of an existing photograph. In addition, rose’s bedside photographs depict all the adventures she had in honor of Jack’s memory according to the plans they made on the ship.

As the gravity of the situation sinks in after the ship hits the iceberg, several poignant scenes play out. One in particular still tugs at the heartstrings—an Irish mother realizes that she and her two children won’t make it out of steerage alive. She puts them to bed and lulls them to sleep by telling them a well-known story from Irish folklore.

“And so, they lived happily together for 300 years, in the land of Tir na nOg, the land of eternal youth and beauty”, the mother says, knowing that they are all close to death. In the folk tale, Tir na nOg can only be reached by going across the sea… or going underwater.[9]

The latest Spider-Man movie not only includes an easter egg in honor of Stan Lee’s birthday in the form of a special license plate but also sports several other great details that make it one of the best additions to the superhero multiverse to date.

After Peter Parker’s revealed to be Spider-Man, he and MJ land on the Queensboro Bridge. This is a throwback to Tobey Maguire’s outing, in which Green Goblin dropped Kirsten Dunst’s character from this same bridge.

As a nod to the four-part comic run of Spider-Man: One More Day in which Peter makes a deal with Mephisto, No Way Home includes a scene where protestors hold up signs depicting Spider-Man as the devil.

Also, when Aunt May flirts with Dr. Octavius, it is a nod to the comics as well in which she and the doctor date for a while.[10]