Author Miguel de Cervantes said, “Love and war are the same thing, and stratagems and policy are as allowable in the one as in the other.”

An estimated 40 million to 50 million died in the war spanning 1939 to 1945. But it was not all that bad as people also found fireworks amid the gunfire. There is no perfect time to love. It can hit anytime and anywhere. But there is just something endearing and fascinating about couples finding it in the middle of war. It’s poetic. So it should not be surprising that some people fell in love despite desperate times during World War II.

Let us take a look at some of these World War II love stories that will make you swoon.

In 2015, the virtual reunion of Norwood Thomas and Joyce Durant Morris made headlines. They were apart for 70 years, married other people, and had children and grandchildren. Their lives were good, but when they saw each other for the first time on Skype after decades apart, the memories came flooding back.

Norwood and Joyce’s love story started on the River Thames in 1944. After dating for a few months, they separated when Norwood joined the paratroopers who were dropped into Normandy, France, on D-Day. The separation lasted seven decades until Joyce’s son found contact information for Norwood’s son.

Their first reunion was via Skype in November 2016, with Norwood living in Virginia Beach in the U.S. and Joyce in Australia. The world fell in love with their story, and a GoFundMe campaign was started so the former lovers could reunite. Air New Zealand offered to fly Norwood and his son to Australia.

Norwood and Joyce finally shared a hug in February 2016 when they reunited Down Under. They spent a couple of weeks together, including Valentine’s Day. Hopefully, the lovebirds get another reunion in the afterlife. Joyce passed away 10 months after their reunion, and Norwood died in February 2021.[1]

My Dear Bessie: The Story Behind The Book | With Readings By Benedict Cumberbatch And Louise Brealey

Bessie Moore and Chris Barker worked together at the post office. They were friends but nothing more. But as they say, absence makes the heart grow fonder. Bessie realized her feelings for Chris when he was shipped to Africa to be a signalman at the onset of World War II.

Chris started writing letters to family and friends, including Bessie and her boyfriend, Nick. When Bessie wrote back, she said she was no longer with Nick and then admitted her feelings for Chris.

“Dear, dear, dearest Elizabeth. What are you doing to me? What are we doing to each other? How did I not see you? Why was I blind? What can I do?” Chris wrote in a letter sometime in August 1944. This letter was inside a blue box that Chris gave his son Bernard just before Chris’s death.

The box contained hundreds of other letters between Bernard’s parents, Chris and Bessie. Despite the harrowing war, the two found each other again and married afterward.[2] 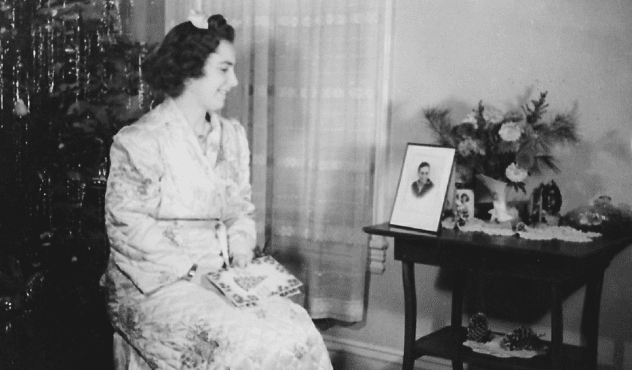 When love is as strong as what Walter Stewart and Laura Versfelt shared, nothing will ever break the bond apart, not even war. Their love story started when they shared a table in school one day in 1940. They dated, married in 1941, became pregnant, and then lost the baby.

Walter and Laura were still mourning their loss when he was shipped to Hawaii to serve in the Navy in December 1943. When the war ended, there was only one thing he wanted to do: Go home to Laura. They reunited, had a family of four, and stayed happy together until Walter died in 2013.

“She’s what I needed to fill in the blanks,” Walter said of Laura in the book War Bonds: Love Stories from the Greatest Generation.[3] 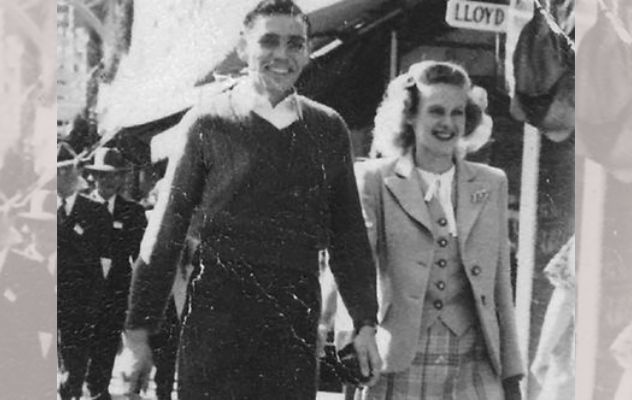 Another romantic story from Cindy Hval’s War Bonds book is about a Navy surgery technician who fell in love with a Marine dietician in the middle of the war.

Walt Powers enlisted in the Navy in 1943 and met Myrt Mueller at the base. Mueller, an Oregon teacher, wanted to protect her students’ fathers who were forced into the war. So, she joined the Marines. She was not sent to the battlefield, which was serendipitous for her and Walt.

He was immediately smitten when they met. It solidified when he asked her for a bike ride, and she said they could do so after church. Walt was elated to find a good girl. They were just getting acquainted when he was shipped to Japan and China as the war waned. However, it did not stop their communication, and through letters, they fell in love.

They got married shortly after Walt got back home in 1946.[4] 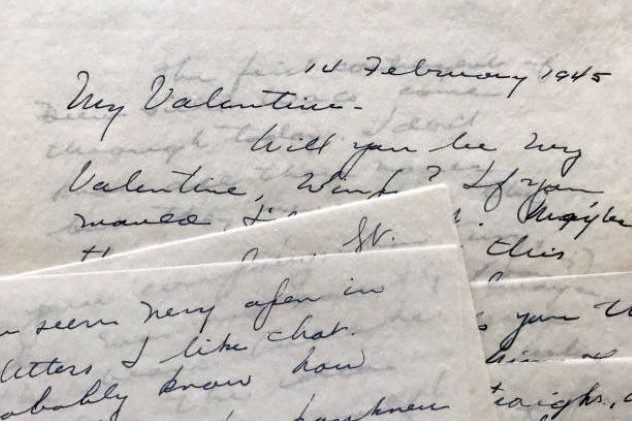 When a couple lives oceans apart, there is always uncertainty. But when war is added to the equation, it becomes about life. Insecurity and jealousy turn into trivial matters. For Lucy and George, survival was the most important thing.

They fell in love but were shortly forced apart by World War II. Though physically apart, their letters bonded them so strongly that distance did not matter. After the war, they reunited, got married, and raised a beautiful family in Australia.

Fifty years later, Karen Lamb discovered 24 letters her grandparents Lucy and George exchanged during the war. Those letters and Lucy and George’s love story have since been published in Lamb’s book Love Has No Boundaries: A True Love Story of WWII.[5] 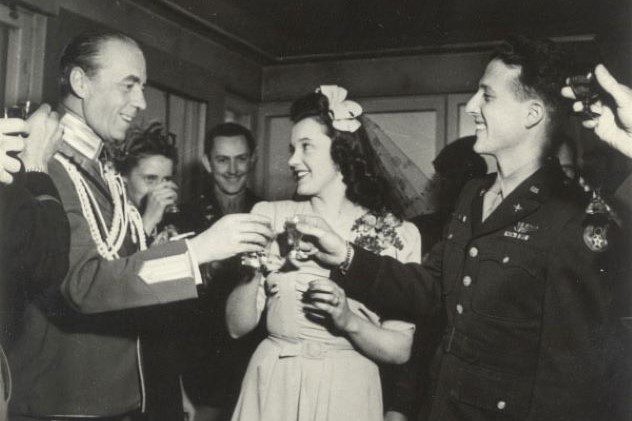 Spies in love—it sounds like a perfect theme for an exciting romantic action film. Except, it’s the true story of Herman Allen and Hedvig Johnson. 1st Lt. Allen was a World War II bomber pilot forced to land in neutral Sweden. He started working for the Office of Strategic Services, the U.S. intelligence office during the war, where he met the beautiful secretary Hedvig Johnson.

Working together in Stockholm transformed their collegial relationship into a romantic one. The rest is history and was the focus of a book by Pat DiGeorge, Herman and Hedvig’s daughter.[6] 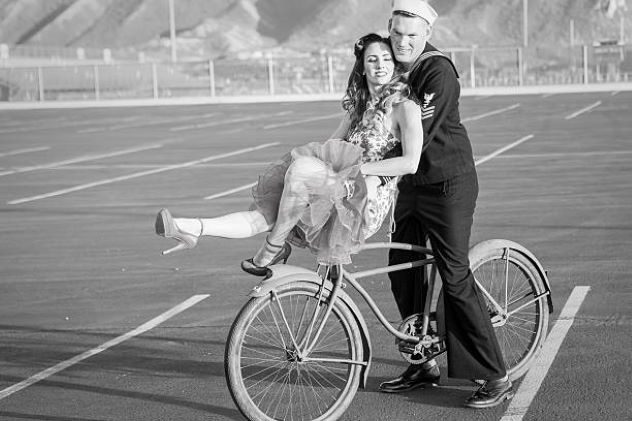 Nineteen-year-old Sal was a radio operator on the U.S.S. Signet as World War II raged in 1943. He regularly wrote letters to his lady love, 16-year-old Loretta, a stenographer. They wrote about home, argued about music, and then made up. As the war waned, so did their letters. Unfortunately, the ending to their love story remains a mystery.

Sal and Loretta’s love story showcases the difficulty of teenagers in navigating romance at the height of the war. Their letters take center stage in Laura Lynn Ashworth’s book, Letters to Loretta from the Radio Shack: Love and Adventure on a WWII Minesweeper. While helping an elderly family member with Veterans Administration paperwork, the author came across 170 letters exchanged between Sal and Loretta.[7]

Harry Leslie Smith: Love in a time of war

Harry Leslie Smith was once known as the world’s oldest rebel before his death in 2018. He had always been a fighter—joining the Royal Air Force in 1941 and becoming a political activist in his later years. But when it came to Friede Edelmann, he was a softie.

Harry and his team were stationed in Hamburg, Germany, when the war ended. There was one rule among soldiers: No fraternizing with Germans, especially the girls. But, the rebel that he was, Harry did exactly the opposite… and more. He fell in love with local girl Friede, referring to her as his “destiny.”

They were told that love between a Brit boy and a German girl wouldn’t work, but the rebel persevered and won. Harry and Friede were together until she died in 1999.[8]

One enduring photo at the conclusion of World War 2 was that of a sailor and a nurse kissing in the middle of New York City’s Times Square. It looked so romantic, except it was not. George Mendonsa and Greta Zimmer Friedman were strangers.

George was celebrating Victory over Japan (VJ) Day on August 14, 1945. Out of sheer joy, he grabbed dental assistant Greta, dipped her, and kissed her on the lips. However, the photo has become such a visual representation of the war’s end that many people have imbibed it with an everlasting love story.

However, George went on to marry someone else—his girlfriend at the time of the photo—in 1946, having two children. They were together until his death in 2019 at the age of 95. Greta married another WWII veteran in 1956, passing away in 2016.

George and Greta met again in 1980, staying in touch occasionally. When interviewed about the kiss years later, Greta recalled: “It wasn’t much of a kiss. It was just somebody celebrating. It wasn’t a romantic event.”[9]

The love between an airman and his German Shepherd could outshine many romantic stories.

While on a reconnaissance mission, Czech airman Robert Bozdech crashed in no man’s land between French and German lines. He hid inside an abandoned farmhouse where he met a German Shepherd puppy he named Antis. As the enemy was inching closer, it would have been safer for Robert to leave the pup behind as its barking could spell his end. But that is not how love works.

Robert hid Antis in his flight jacket and walked his way toward the French troops. They were inseparable from that point, going on around 30 missions together. Antis became the mascot of Royal Air Force 311 Squadron. They stayed together after the war, living in the UK, where Robert became a citizen. He died in 1951, and Antis followed two years later.[10]