The Great Depression lasted in the United States from 1929 to 1933. Many people lost their money during that time due to Wall Street’s stock market crash. The economy slowed down, and jobs dried up. Many people had a hard time scraping money together to feed their families. Soup kitchens sprung up across the country to ensure that those out of work got at least one meal daily.

People learned to make do with what little they had, which often meant planting gardens, raising chickens, and keeping cows; men took to the woods and hunted wild game or fished. Creativity was a necessity for many parents who had children to feed. New recipes were concocted, and foods that people didn’t consider eating were now consumed without question. Food scarcity was real, and some people who lived through the Depression never overcame the fear of going to bed hungry.

As hard as times were, here are ten weird foods people ate during the Great Depression.

Related: 10 Things That Developed Because Of The Great Depression

The Man Who Eats Roadkill

“How flat is it?” and “How fresh is it?” These were the two main questions asked when handed roadkill.

We’ve all been speeding down the highway when we happened upon a dead animal in the ditch or on the side of the road. Normally, the animal patrol sends out someone to pick up the dead critter so it can be disposed of properly. Though there are some people today who think this is a waste of perfectly good food.

During the Great Depression, nothing went to waste. Not even roadkill. Rabbit, opossum, squirrel, raccoons, deer, bear, moose, elk, and pheasants are some of the meat collected from roadsides and delivered to a kitchen to be turned into cuisine.

A well-known recipe, Brunswick stew, was made with squirrel and rabbit and was all the more flavorful if the roadkill had been “aged.” The working premise for many who cooked up meals using roadkill was, “Don’t ask, don’t tell.” As long as the meat was still fresh and nutritious, people didn’t care where it came from. If it kept hunger at bay for another day, then it was considered good cooking.

How to make snapping turtle soup

Tasting like a combination of pork, clams, and chicken thighs, no snapping turtle was safe during the Great Depression. Snapping turtles are cold-blooded reptiles and a cousin to lizards, snakes, and alligators. On average, they weigh 10 to 36 pounds (4.5 to 13.5 kilograms) each. Capturing a snapping turtle is not for the faint of heart. They hiss like a cat if you get too close, and their jaws can easily bite off a finger. Folklore claims that the head can still bite you even after a snapping turtle is beheaded.

While that may or may not be true, turtles were easily acquired in the spring during mating season when they were on the move and were sometimes seen crossing roads. Being out of their natural water environment made it much easier to catch. To catch one of the hard-shelled creatures, a particularly brave soul would go so far as to get behind a snapping turtle and pick it up by its tail, capturing it to become a meal.

Turtle soup is essentially a vegetable stew with turtle meat instead of beef or chicken. To make the soup, the turtle meat simmers in a water bath with celery, onion, and carrots. When ready, the turtle, with the shell still attached, is lifted from the pot, and the meat is picked off the carcass. Eating turtle soup was a way to survive during the Great Depression. Today it’s considered a delicacy.

The Amish have been known for their plain and simple meals. Always frugal, they had to be even more so during the Great Depression as it hit them particularly hard during this challenging time in America’s history. So coffee soup was a common breakfast meal, and it’s a little more complex than the extra hot venti latte you’re sipping on now.

Coffee soup was made by placing bite-size pieces of dry or hard bread in the bottom of a bowl. Next, brewed coffee was poured over the bread, followed by sugar and cream or milk, which turned the whole thing into a gruel. Coffee soup was warm to fill stomachs with, and a load of carbohydrates and sugar provided energy for the hard day’s work ahead.

Although the pie’s name is slightly repugnant, it’s actually pretty tasty with a custard-like texture and sweet and tangy flavor. With a pantry filled with the most basic ingredients, vinegar pie was an easy option when there was little money for treats. We should all be taking some notes on these recipes right about now.

Desserts were rationed during the Depression. Ice cream wasn’t plentiful. If homemakers had to choose between bread or meat and ice cream, they would spend their money on nutritional food. For mothers, Jello ice cream was an easy, no-churn way to give their families a treat. If a family lived in the country, chances are the family owned their own milking cow leaving only a packet of Jello to be purchased at the store and some vanilla rifled from the cupboards.

The raspberry Jello was dissolved in boiling water, and then sugar, milk, and vanilla were added. Finally, a cup of heavy cream was whipped until it formed stiff peaks. The whipped cream was folded into the Jello mixture. The entire concoction was put in the freezer to set up. This poor man’s ice cream couldn’t compete with store-bought ice cream, but kids didn’t care. It was sweet and tasty and a real cheap treat for cash-strapped households.

They say there are no free meals in life, but sometimes, with a little ingenuity, there are. The French are famous for foraging wild, fresh greens. Depression-era homemakers took a page from French cuisine when they started keeping a close eye on their yards after a long winter. One of the early springtime weeds to sprout and pepper lawns with their yellow flowers is the dandelion.

These days, in many parts of the country, lawns are sprayed with weed killers to eliminate this nuisance plant. But many people don’t know that if you pick the leaves of dandelions when they are young and tender, you can create a salad with them. And it’s free.

Depression-era homemakers waited expectantly for dandelions to start popping up out of the ground. The tender leaves were picked in early spring, washed, and made into a nutritious salad. Hard-boiled eggs and bacon bits were often added to the greens. The leftover bacon grease was combined with vinegar to make a dressing. Salt and pepper and voila!

Have a Bite of the Garbage Plate

No, this dish doesn’t refer to dumpster diving. During the Depression, a lot of manual labor was performed, and workers needed fuel to keep working hard. What better dish to fuel a body than a carbohydrate-loaded garbage plate?!

Garbage plates were built from whatever the cook had on hand. For instance, a giant scoop of macaroni salad was slung onto a plate. Then a scoop or two of baked beans. On top of that were some fried potatoes. And on top of all that, a fried hot dog or two. Or maybe fried bologna. To all that was added mustard, chopped onions, or ketchup. Maybe some chili. Whatever was on hand, really.

After eating a garbage plate, a man was fueled up and ready to put in another four or six hours on the job.

Many people had their own gardens during the Great Depression. Onions were a common vegetable because they were easy to grow and store over the winter months. So, they were essentially free, and peanut butter was cheap. The idea of combining peanut butter and onion makes my brow furl, but the combination was a winner. Plus easy to prepare.

The cook hollowed out the center of each onion and saved the scooped-out onions for other dishes (nothing was wasted). Then peanut butter was mixed with bread crumbs made from stale bread. The bread crumb and peanut butter mixture was then spooned into each hollowed-out onion. After roasting in the oven for an hour, the onion came out flavorful and sweet, while the bread crumbs in the peanut butter stayed crisp and crunchy. These were served as dinner dishes, desserts, breakfasts—heck, just about any meal.

Nothing says ingenuity like making do with very little on hand. 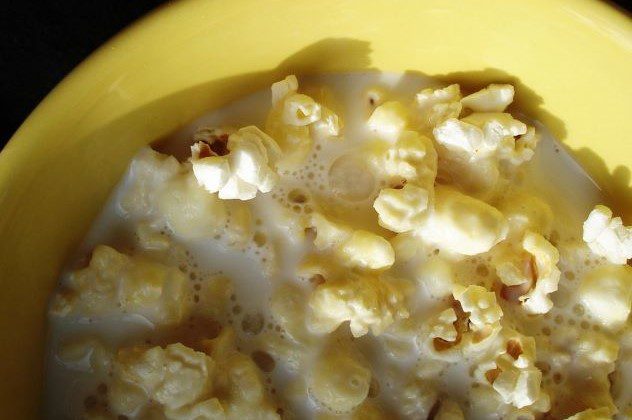 Popcorn was one of those affordable rare foods during the Great Depression. Instead of pouring melted butter over their popcorn, some people poured milk over it and ate it as their main meal. And we’re not talking about eating it as breakfast cereal. No, popcorn with milk was eaten as a dinnertime main course. It turned into another form of gruel, but the dish offered nutrition and kept hunger pangs at bay. There were instances where sugar was sprinkled onto the milk-coated popcorn.

Hmmm… sounds a bit like the forerunner to today’s sugary breakfast cereals, doesn’t it? Give this depression-era combo a try. Maybe you’ll make it an integral part of movie night at your house. 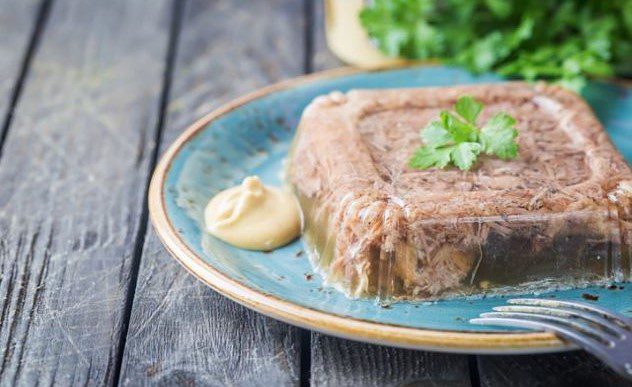 Nutrition over taste was the golden rule when food got scarce during the Depression, and money was hard to come by. Food not only had to be cheap, but it had to be filling. Corned beef luncheon salad was made by combining a can of corned beef, a can of corn, and a can of peas. Added to that were plain gelatin, lemon juice, and vinegar. It was poured into a Jello mold or a large bowl and put in the refrigerator until the gelatin was set.

Just reading the combination of ingredients triggers your jaw to clench shut and refuse to open. But then again, if you were a kid who grew up on this dish, maybe all these years later, it brings back a sense of nostalgia for a hard time when families had to pull together and make do with what little they had.

The Great Depression turned out to be a cauldron for great experiments with food today known as “Depression-Era Cuisine,” which amazingly is making a comeback.