Our definition of “weird food” is so subjective that it’s difficult to define and call something as it is. At the age of ten, my brother thought that mashed potatoes were a weird food. Most of the world questions the U.S.’s obsession with peanut butter. “Weird” is a cultural and personal culinary designation.

Even still, the Western world, specifically the United States, does have a few culinary items that people generally see as weird, even within our own borders. The problem is that we also associate weird with tasting bad. The fact is that some of these foods are pretty friggin’ delicious. Here are 10 weird foods that are actually delicious.

Have you tried Pickled Herring?

You may have seen Vita brand pickled herring stuffed in the corner of the refrigerated section in the grocery store. It’s this big jar filled with sour cream, onions, and rectangular chunks of greyish fish. Though it may appear that something is wrong with the jar, you’ll be happy to know that no one has tampered with the cap and the expiration date is a couple of months out. It isn’t mayonnaise that has grown black mold, nor is it the contents of a sick person’s stomach after eating cream of mushroom soup. It is only the most delicious snack to hit the seafood world: pickled herring in sour cream and onions.

Though it’s definitely not for everyone, pickled herring is a great source of fatty acids and is a tangy, meaty snack. It isn’t as fishy as you’d expect, and the texture of the sour cream and onions cuts through the savory nature of the fish itself.

If you’re ever feeling adventurous, grab a water cracker and put a piece of herring on top. Eat and enjoy!

This Mexican treat is usually served with chili and lime and provides a great source of protein. Even more, the commercial farming of edible grasshoppers doesn’t impact the environment as the meat industry does.

Fried grasshoppers may be odd to folks in the United States and Europe, but it’s a popular snack among kids in the Oaxaca region and is gaining popularity globally. You can make them yourself by heating the frypan with some oil, throwing the chapulines in, and seasoning with garlic salt or a little chili powder. You could even make some chapuline tacos or an Oaxacan-style “pizza” called a tlayuda.

Across the pond sits the country of France, where snails are both garden visitors and food. But though the French word for snails has stuck, it has seen an incredible history in the U.S. Escargot was all the rage in the 1980s, making up a $300 million industry at one point. It may have taken a considerable back seat in recent years as the food trend died down, but it is certainly still one land bug worth trying.

Chefs slather on the butter and garlic and will occasionally serve it with a piece of garlic bread. All you have to do is mentally get over the texture of the snail, which is what I imagine biting into an eyeball would feel like. Kind of chewy, a little hard, but ultimately soft and delicious. Weird, I know.

A word of caution: don’t harvest snails from your garden and assume they are edible. Not all species are. If you want to cook them at home, purchase some apple snails or helix promatia.

3 WAYS TO USE SPRING DANDELIONS ~ FORAGING

We take dandelions for granted. We treat them as a weed when we should be harvesting them instead! Although, knowing pollution and the chemicals we lay down on our grass each year, perhaps grazing on our lawn’s annual dandelions is not a good idea. You can, however, purchase dandelion greens from the grocery store, and those are safe.

This now weird food was once eaten regularly pre-Victorian Era, as the root and leaves of the flower hold certain medicinal properties and are rich in vitamins A, C, E, and folate. You can also turn the flowers into dandelion wine and the root into a tea, making a decent coffee substitute (flavor-wise) if you add chicory.

If you eat the leaves by themselves, they are pretty bitter. But if you pick young leaves and sautee them with some salt, pepper, and lemon, it makes for a delicious side dish comparable to beet greens and arugula. 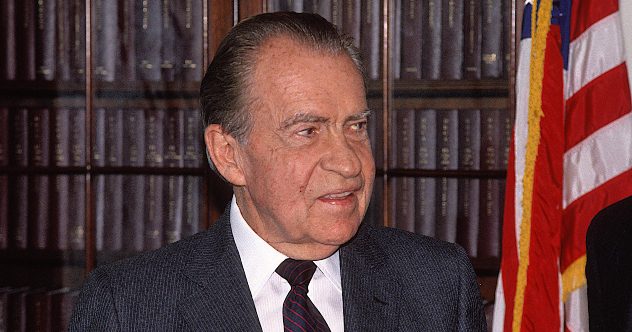 President Nixon was a smart man who did something incredibly stupid. So we only seem to remember him for his tax evasion and, well, the fact that he thought he could get away with not paying what every American has ripped from their bank accounts every year.

Nixon liked to eat a weird little somethin’-somethin’ that I have personally eaten before and can vouch for its deliciousness: macaroni, ketchup, and cottage cheese.

I know; it sounds like vomit. But it’s good! It’s tangy, filling, and a good thing to feed the kids when you’re broke from tax season and can’t afford to buy groceries—a veritable bowl of odds and ends.

Blood sausage is weird only for the fact that it uses real blood. Not human blood, but either pig, sheep, cow, or goose blood. Because no one really wants to eat blood, though, the Brits and folks in Ireland have cleverly named it black pudding because of the dark, almost black, color it gets.

Mixed with a filler (like oats or barley) and stuffed in a casing, blood sausage is a savory treat commonly served with full breakfasts. It’s high in protein and iron but not very good for you on the cholesterol front.

Still, you shouldn’t shy away from it if given a chance to eat it. It’s certainly not like eating a regular pork sausage, but the texture is far from weird, and the flavor, especially if you dip it in brown sauce, is out of this world.

Chicken livers, meh. Chicken liver pâté? Now we’re talking. Chicken liver has become the ” ethical ” alternative because the foie gas industry is so controversial (goose farmers force-feed geese grains to make their livers fatty for the dish). It’s not as good as foie gras, in my opinion, but it’s a nice low-budget option for a dinner party hors d’oeuvre.

Don’t try to make this at home, though. It’s hard to eliminate the metallic taste of the liver, even after soaking it. It’s best purchased pre-made, ready for you to enjoy on a soft baguette, surrounded by your fancy friends.

If you know your anatomy terminology l, you may be looking at the name of this one with raised eyebrows. Derma, doesn’t that mean skin? Yup. It does. But kishke translates to guts, so I’d focus more on that name.

Kishke, or stuffed derma, comes from the old-world Ashkenazi Jewish culture and is quite a treat. You can find the meal in practically any Jewish deli you go to, including Manhattan’s famous Katz’s Deli.

So what is it made of, exactly? Glad you asked.

Encased in cow or sheep intestine (making it a sausage of sorts), modern fillings include schmaltz (rendered chicken fat) or chicken or goose fat (whatever is handy), matzoh meal, flour, onion, and other spices.

Right? Not that weird. I just think that anything with a name that blatantly calls a food what it is freaks people out.

Waste not, want not. Another high cholesterol but protein, collagen, and vitamin B12 rich delicacy is bone marrow. This weird food is so common that it really shouldn’t be labeled as weird, but the concept of eating bone marrow is a little odd.

Like, who first thought to themselves that they should split open the bones of a cow and suck out the insides? Isn’t that a dog’s job?

Chefs across the globe split open beef bones for the yellow marrow, season and roast it, and serve it with bread or by itself. The nutty, buttery-rich flavor of the marrow is drool-inducing. But then, they charge you a bazillion dollars for it.

Listen, it’s a darn good dish and a great go-to for an adventurous and sophisticated palate. But I can go down to the butcher and buy those things for less than half the price. There’s no reason restaurants should be charging that much for this appetizer.

Rocky mountain oysters are sheep or bull testicles, whatever is hanging around. In Canada, they call them prairie oysters. You may remember the scene in 1988’s “Funny Farm” with Chevy Chase as he proudly downs ball after ball at a diner only to be told, “It’s balls.” After which, he runs out, disgusted.

But hey, he liked them! And I guess maybe we shouldn’t be so judgemental toward the food, either. The calves who sacrifice their balls for our enjoyment would not be happy to know their contribution to food society grosses us out.

So if you’re curious about what animal testicles taste like, you don’t have to go on Fear Factor. Head to Montana’s annual testicle festival (yes, it’s real) and try them for yourselves!