Certain periods of history are known to have a particular aesthetic, and perhaps no period of history brings to mind very specific aspects like the wild, wild west. What would later become the western half of the United States of America possessed a dramatic, dynamic history during the 19th century. Gold rushes, railroads, the plights of Indigenous tribes, and, of course, cowboys and outlaws are probably the first things that come to mind when one thinks of the early American frontier. And many legends, such as Jesse James or Buffalo Bill, are still remembered to this day.

Some legends, however, skew a bit more supernatural than just some town that happens to not be big enough for both a sheriff and an outlaw. The wild west is as beautiful as it is isolated and has a rich history, stretching far before European colonists even reached the eastern part of the continent. This list details ten yeehaw-nting legends from the lawless lands out west.

The HBO wild west show Deadwood was indeed based on a real-life South Dakota Gold Rush town by the same name. In fact, the main character and store owner-turned-sheriff, Seth Bullock, was just as real. And according to legend, he still keeps tabs on the town of Deadwood from beyond the grave.

The Bullock Hotel was built in the last decade of the 1800s and is the location where the spirit of Bullock apparently keeps tabs on his property. The ex-sheriff, however, isn’t a malicious spirit, often only engaging in prankster poltergeist activity, such as moving chairs, slamming doors shut, and knocking objects over. It is claimed that the spirit even aided a lost young boy find his way back to his parent’s room. When the parents asked the child who helped him find his way, he simply pointed at a portrait of Seth Bullock.[1]

When haunted ships sailing the seas seem like an overrated concept, look no further than the land-locked state of Wyoming, where, against all odds, a haunted sailing ship is said to sail. Worry not, though; Wyoming’s “Death Ship” does stick to a body of water. It sails the Platte River, specifically, instead of somehow drifting through the deserts or plains.

The Platte River Death ship is said to appear to one person every 25 years, though it does far more than simply sail silently on a river. According to legend, witnesses unlucky enough to spot the vessel materializing out of the fog also see the illusory corpse of someone they know among the spectral sailors. Shortly after, the person witnessed is said to then die in the real world. This is what occurred with the Death Ship’s first witness in 1862; trapper Leon Webber, who saw his fiancée on the haunted frigate. The woman was said to have died the exact same day of Webber’s sighting.[2]

8 The Ghost Town of Garnet

Just because someplace is called a “ghost town” doesn’t mean it’s necessarily home to any ghosts. Some places simply become abandoned and are left to the elements. The ghost town known as Garnet, however, is an exception to the rule. Located on the western side of Montana, this still-standing ex-boomtown has multiple buildings that allegedly house restless spirits.

Kelly’s Saloon, for example, is probably the most notorious, where one can hear the raucous sounds of music and laughter without a single living person on the premises. The Wells Hotel is also plagued by strange, incorporeal footsteps, doors slamming, and more strange laughter. The town grew in popularity in 1865 when gold was found at nearby First Chance Gulch, though when the gold dried up in 1905, less than a hundred people remained until, eventually, there was no one. [3]

7 The Phantom Train of Marshall Pass 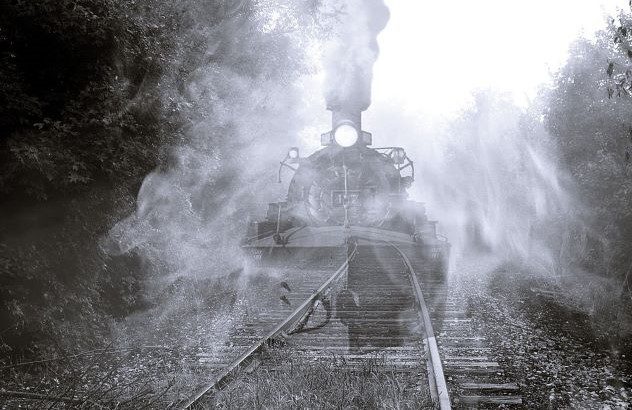 From the supposed spectral funeral train of Abraham Lincoln in Illinois to the equally haunted illusory locomotive in Louisiana, ghost trains are a staple in American folklore. And the wild west, being particularly affected by the invention of the steam train, is no stranger to such stories. One of the most infamous ghost trains of the frontier was once sighted in the area of Marshall Pass in Colorado in the 1880s, a route that connected Denver to Santa Fe.

Engineer Nelson Edwards was steering his locomotive along the icy Colorado tracks when suddenly, he heard and saw what sounded like a train right behind his own; a train that wouldn’t decelerate and would soon crash. A warning light showed, telling Edwards it was required that he brake, and he bit the bullet and pulled the lever. Mysteriously, no train collided with his own, and Edwards’s locomotive was safe. However, after receiving a mysterious note detailing the accounts of a crashed train years prior, Nelson Edwards immediately retired the next day.[4]

With such a colorful name, one would expect this Nevada specter to also have a colorful history. Big Jack Davis was an accomplished train and stagecoach robber in the 1860s. However, one unsuccessful robbery would end with the outlaw getting shot in the back and killed, though his unclaimed fortune in the Nevada wilderness would grow a reputation that exceeded Davis’s while alive.

However, where normal spirits of the deceased manifest as ghosts, Big Jack Davis would allegedly change into something more. Described as a “shrieking white demon,” it is said that the outlaw grew wings from the bullet holes in his back, and according to legend, he would chase away anyone who dared search for his hoard.[5]

When one thinks of the wild west, it is most often the wild southwest that features in most western movies, but the western half of Canada is also filled with a rich history and stunning landscape. Also, if the legends are to be believed, it was a particularly haunting location, where many prospectors hoping to strike it rich in the 19th and 20th-century Yukon Gold Rush would meet a grisly fate.

From supposed cannibal giants to cryptid dire wolves to a dozen actual, documented disappearances and mysterious murders, the Nahanni River Valley in the Northwest Territories of Canada is an enormous hodgepodge of paranormal activity. Although, the largest swath of mysterious circumstances occurred at the height of the Yukon Gold Rush in the late 19th century. Perhaps the most notable case, however, is the deaths of prospecting brothers Willy and Frank McLeod, whose bodies were found to be decapitated after allegedly finding a rich prospect.[6]

The Headless Horseman of Texas!

Keeping with the decapitation theme, this next headless legend is found toward the southernmost end of the western frontier this time. In southern Texas, near the border with Mexico, is where the tale of El Muerto runs wild. Though the translation from Spanish to English is a bit on the nose, simply meaning “The Dead,” El Muerto is nonetheless a horrifying spirit to cross paths with.

In 1850, a horse thief who went by the name Vidal stole prized mustangs from Texas Rangers Creed Taylor and William Alexander Anderson Wallace. When they tracked the bandit down, the rangers decided to leave behind a grisly warning to other would-be horse thieves. They decapitated the man and strapped his body to his horse to ride off into the sunset. Vidal’s body, though, would allegedly escape decomposition. For the next few decades, unfortunate frontier folk would spot the ominous headless horseman of Texas riding in the wilderness, giving him the name “El Muerto.”[7]

The aptly named Tombstone in Arizona is the site of many gruesome deeds, though perhaps the most memorable is the accidental death of Fred White by “Curly” Bill Brocius in 1880. Though a mistake, White was, indeed, the marshall of the town, and Brocious toed the line of an outlaw by belonging to the notorious Clanton Gang.

Though less flashy than a classic cowboy quickdraw, it is said that the marshall’s black-coated specter is still seen in the streets of Tombstone, which has survived to this day as a tourist attraction. His ghost isn’t alone, however, as the spirit of a woman in a white dress is also often seen, in addition to the ghosts of victims of the Bisbee Massacre, the result of a failed stick-up. Though often embellished, Tombstone’s sordid history is rife with outlaw gang violence and crime, so a well-established history of hauntings isn’t too out of place.[8]

Some legends are the sort that are fun to tell around a campfire, and some legends are a heavily believed subject, even to this day, and the mere mention of them in passing is a taboo subject. The Navajo tales of the shape-shifting witch known as the Skinwalker are such a legend, and even talking about it, let alone taking it lightly, is extremely looked down upon.

One alleged hotbed of paranormal activity can be found in Uintah County, Utah, which was colloquially dubbed “Skinwalker Ranch” after Terry and Gwen Sherman bought the property in 1994. The Sherman family supposedly played witness to a rash of cattle mutilations, massive, magically bulletproof wolves, and even UFOs and poltergeist activity until they sold the property two years later. Though the legend of the ranch itself is more modern, the eponymous monster therein has apparently been spotted for centuries in nearby cursed Bottle Hollow. Although it is important to note that the neighboring area belongs to the Ute tribe, not the Navajo.[9]

1 The Ghost of Jesse James

Unsurprisingly, one of America’s most infamous outlaws is the subject of many legends that even go beyond his exploits as a living, breathing criminal. Jesse James Farm, in the town of Kearney, Missouri, is both the location of the outlaw’s death at the hands of fellow gang member Robert Ford in 1882, as well as the location of James’s supposed ghost.

Ethereal footsteps and horse hooves can be heard where none are present. Shadows move without tripping security alarms, and even the sounds of a sudden gunshot can be heard from inside the property. In fact, the James family itself claims that their home was haunted well before the notorious outlaw grew up and started his crime spree, even seeing the apparitions of Civil War soldiers on the premises. However, activity certainly increased after James’ death by gunshot.[10]