Red light districts, a center of sin, sexual vice, and debauchery, are where many go to unwind, escape reality, and indulge in their greatest pleasures. Legalized prostitution, drinking, and every vice imaginable lay within a few mere city blocks. Along with it come organized crime, violence, and sordid tales that are seemingly incredulous yet true. Red light districts have been the dirty underbelly of humankind since the days of Sodom and Gomorra and very possibly before.

In the United States, a country founded with deeply religious ideals against sexual activity, especially legalized activity, many red light districts did not survive to the modern day. We have listed, in no particular order, some of the most lustful, sinister, and sinful American red light districts of all time.

Created in 1897, as prostitution in America’s original sin city was running rampant into suburban areas, Storyville was the first legal red light district in New Orleans. It was located in what is known as the Treme neighborhood today and was named after a local politician named Sidney Story. While other areas had operated illegally prior to its creation, it became the first fully legal red light district in the city’s history—and the most well-known.

This district was a four-by-four-block radius of brothels, sporting houses, and dance halls. It became a breeding ground for Jazz music and was essential in the development of the music. Mafia activity and other organized crime ran rampant as well. Storyville was closed in 1917 due to America joining WW1 after a federal decree was issued stating that a city could not have both a red light district and a naval base.[1]

Running along what is now the financial district in San Francisco, the Barbary Coast existed from around 1848 to 1911. It developed during the lawless days of the American wild west and Northern California gold rush. As the population of San Francisco grew from 200 to over 10,000 in 1851, local authorities struggled to control the rising population. Organized gangs such as “The Hounds” and “The Regulators” dominated the area, and the seedy history of the coastline began.

It was named after the Barbary Coast of Africa, a coastline where many pirates and slave traders would port, that ran along Morocco to modern-day Libya. The California port of the same name held a similar reputation. Many visitors were often ambushed, murdered, or mugged here at one of its many predatory dive bars. After the 1906 earthquake, the area was rebranded as Terrific Street and would go on to feature dance halls and jazz clubs. A different flavor of sin, but sinful nonetheless.

By 1911, newspaper mogul William Randolph Hearst and Mayor James Rolph began to shut the area down permanently by implementing regulations against dancing women in places that served alcohol. By Valentines Day 1917, the final brothel was closed, and the Barbary Coast was no more.[2]

Hidden deep in San Antonio’s history was a 22-block area near where Market Square is today, known locally as the Sporting District. From 1889 to 1899, brothels were legally recognized in the area. But crackdowns in the area did not occur until the 1940s! Soldiers would often secretly travel here via a special rail trail from Fort Sam Houston.

Upon arrival, they would be handed a “blue book.” Blue books were common in red-light districts of the time and were directories of brothels, highlighting the women inside of them, often including their ethnicities. The blue book of San Antonio was unique, however, as it was published by a police officer named Billie Keilman, who owned property in the Sporting District.[3]

Being at the center of Manhattan and a major intersection of the subway system, it has always been a major thoroughfare for locals and tourists alike. The New York Times called 42nd Avenue the worst block in NYC in 1960, and this was before the brothels, burlesque shows, and grinder theaters were even fully developed.

The famous disco club, Studio 55, lay on the outskirts of this now-forgotten district. It wasn’t until 1985, as New York fought to regain control over its finances, that a cleanup campaign of Times Square began. A slew of regulations and laws by former Mayor Rudy Giuliani followed, and the area became the tourist attraction we know today.[4] 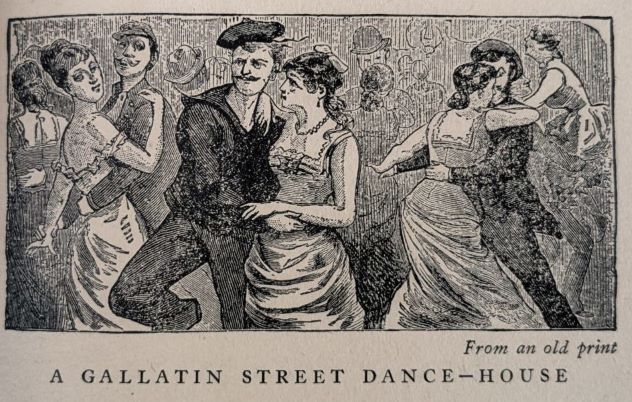 Lesser known than its salacious cousin Storyville, Gallatin Street was the predecessor for the title of “most sinful street in New Orleans.” Laying where the quaint shops of the French Market now reside, right by the docks of New Orleans, it was considered the most dangerous street in New Orleans’s history. Many immigrants would enter New Orleans through the area, never to see any other part of the city.

They were often mugged, murdered, or shanghaied about as quickly as they got off the boat. Operating from the antebellum period to the end of the 1870s, the district produced some of the most violent criminals in New Orleans, a city known for a particularly violent past. With the opening of Storyville, the brothels of Gallatin Street were forced to move to the new legal red-light district, and the street folded. The old buildings were demolished, and the street was renamed French Market Place in 1935.[5] 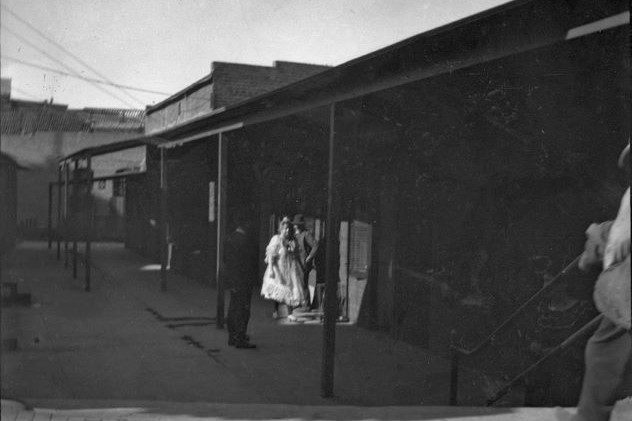 Along the Southern Pacific Railroad lay a stretch of Alameda Street that, at one point, many visitors were eager to visit. Know as Hell’s Half Acre, it was one of the seediest areas in California history, and much of it still remains a violent part of town today. Women in the area were known to service 13 to 30 men a day and would entice them by standing on wooden platforms outside their homes.

Police authority was extremely lax, as it was in many other red-light districts across the nation, and prostitution ran rampant. Suicides and drug abuse were part of everyday life, as was violence against women. In addition, women were often extorted for their money at the saloons by their pimps and forced to pay high rents for small squabbles of homes known as “crib houses.”

A man named Barolo Ballerino, known as the “father of the cribs,” was the kingpin of the area. His violent legacy still lives on today as the area still remains impoverished and crime-ridden. These “crib houses” were raided in 1903 due to protests from women’s rights organizations, and the area ceased from ever serving as an illegal red-light district again.[6]

Just north of Union Square is one of San Francisco’s poorest and most violent neighborhoods. It has carried that reputation since shortly after the great San Francisco earthquake of 1906. By the 1920s, “the TL” overflowed with speakeasies, brothels, and all other manner of sinful nightlife. It is believed its unique name was coined by Police Captain Alexander S. Wiliams because officers who patrolled the area could afford a more expensive cut of beef from the bribes they received there.

Later, it became a central hub for jazz and rock ‘n’ roll musicians. Miles Davis and John Coltrane both recorded live albums at the infamous Black Hawk in the early ’60s. Creedence Clearwater Revival, the Grateful Dead, and Jefferson Airplane recorded records at nearby Hyde Street Studios in the late ’60s.

The Tenderloin also served, and still does, as a safe haven for the LGTBQ+ community. It was home to one of the nation’s first gay organizations, the Vanguard. While no longer a red light district, the Tenderloin is still the seediest and drug-ridden neighborhood in San Francisco and the epicenter of the city’s homeless problem.[7]

Chicago is just one of many American cities closely associated with illegality and violence. From roughly 1893 until 1912— although other districts had operated long before—”The Levee District” dominated the nightlife of Chicago. Running along the north bank of the city, along what is today Wells Street, this area had been a hotspot for criminal activity since the 1850s.

The lower section of the Levee District was known as “bed bug row” and hosted some of the grimiest and most disgusting brothels in United States history. In stark contrast was the Everleigh Club, a 5-star sporting house where women of the area were honored to work. At its height, in 1894, the Levee District had 46 saloons, 37 “houses of ill-repute,” and 11 pawnbrokers.

The Women’s Temperance Union (WTU) fought hard across the nation for women’s rights in red-light districts such as this. They won their battle, and by October 1911, 135 warrants were issued for establishments in the Levee District. Many red-light districts across America were closed due to the valiant efforts made on behalf of sex workers by the WTU.[8] 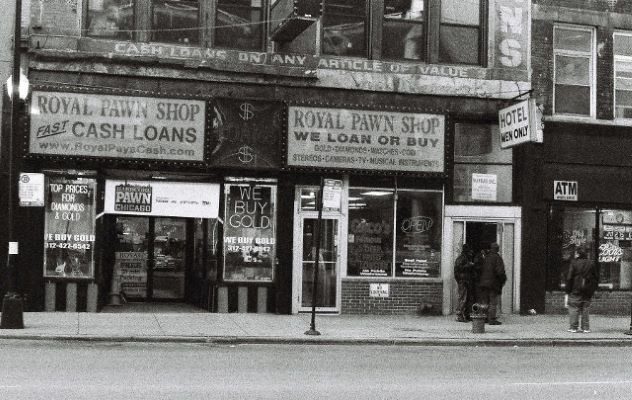 Prior to the Levee District, “Little Cheyenne” dominated the scene shortly after the Great Fire of 1871. It ran along South Clark Street on the south side of the city and encompassed the spirit of the wild west, with every avenue of ill repute possible available to its patrons. Cheyenne, Wyoming, caught word of this and named their red light district “Little Chicago.”

Little Cheyenne operated all the way up until the 1970s. Today, a small portion of it exists in the form of a hotel called the Ewing Annex that rents 5×7-foot (1.5×2.1-meter) rooms to homeless men. These “rooms” are hardly suitable for human inhabitance, separated at times by sheets of chicken wire. This serves as a reminder that the degradation of times past still exists in our modern world.[9]

Just to the south of Denver lies the little town of Cripple Creek, Colorado. A western town that appeared during a gold boom, it quickly was able to provide “sporting houses” to visiting miners as the female population increased. This was common in the late 1800s across the west. During the days of the American wild west, it was often common for small boom towns such as Cripple Creek to turn into miniature centers of sin and fueled the already lawless young nation.

As part of the wild west as train robberies and shootouts in the streets, the brothels flourished from Kansas to Texas to even Alaska. Generally run by madams, the brothels enabled some working girls to leave the lifestyle for greener pastures. Two of the prostitutes who worked and lived in these brothels went on to marry famous gunslingers Harry Longbaugh—aka The Sundance Kid—and Doc Holliday. One woman, Laura Bullion, even joined Longbaugh’s gang, the Wild Bunch Gang.[10]