The Interpol Stolen Arts Database houses an immense list—over 52,000 records—of stolen works of art, along with pictures and descriptions of each piece. Countries all over the world contribute records of stolen treasures—certified with police information—in an effort that spans oceans, crosses continents, and transcends borders. In the billion-dollar black market, it’s no surprise that both art theft and recovery are big business. Here are ten times lost works of art have been rediscovered through unusual circumstances.

A late-November heist at the University of Arizona Museum of Art in 1985 resulted in the loss of the $160 million painting Woman-Ochre by American-Dutch artist William de Kooning and a 32-year mystery regarding the valuable art’s whereabouts. The theft was carried out by a couple shortly after the museum opened, with the woman distracting a security guard before the guard could reach her upstairs post. Meanwhile, the male cut the painting from its frame. The couple made off with the invaluable painting before the guard discovered Woman-Ochre had disappeared.

With no cameras or fingerprints to go on, Woman-Ochre remained missing until the death of two well-traveled schoolteachers. Jerome and Rita Alter passed away in the tiny New Mexico town of Cliff in 2017, leaving their nephew to execute their estate, including a painting that hung behind their bedroom door. Antique dealer David Van Aucker soon paid $2,000 for the deceased couple’s art, taking possession of pieces that included the valuable painting. He hung the art in his Silver City store, where customers recognized the piece.

After a process that involved the FBI and a 2½-year restoration, Woman-Ochre hangs back on the same wall she was removed from in 1985. Meanwhile, the Alter family is left to wonder if a short story Jerome Alter penned about a 120-carat jewel being stolen by a woman and her daughter while a guard is distracted, then hanging it behind a wall panel for the two thieves’ secret enjoyment is based on more than just imagination. [1] 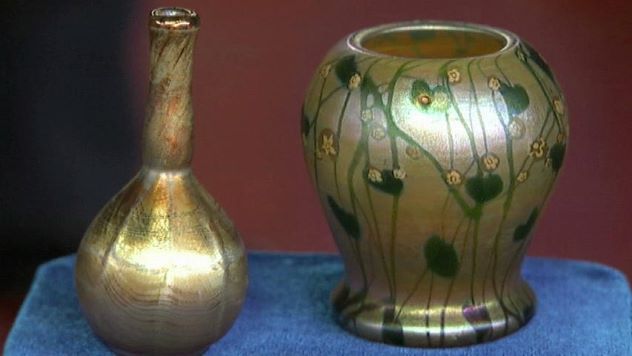 In May 2018, New York City-based art glass dealers Howard and Paula Ellman made a startling discovery. After placing the winning bid on several items at a Pennsylvania auction, they found that some of the glass, including a Tiffany Favrile Vase, had been stolen from them 37 years prior. The discovery happened when the shipping service the Ellmans hired delivered four of the items they’d won with call-in bids. While unpacking the items, Howard discovered their own shop labels on the bottom of the Tiffany pieces, labels which the couple always removed when a piece was sold.

Upon further investigation, the same auction the Ellmans had purchased their own stolen glass from had sold 16 more of the 40-50 Tiffany pieces they’d lost in the unsolved robbery. Thanks to the documentation Paula had held onto for nearly four decades, it was determined that the couple were entitled to the return or value of all 16 stolen Tiffany works; works whose worth had drastically increased during their missing years.[2]

Loyal Goodwill shoppers might mention the nonprofit’s mission to empower the less fortunate, the low-cost, or, less frequently, the discovery of literal treasure. This was the case for Laura Young, an antique dealer who stumbled across the find of a lifetime for $34.99 at an Austin Goodwill. The discovery, a 50-pound (22.7-kilogram) marble sculpture, turned out to be a first-century bust of Roman general Drusus Germanicus that went missing from the German museum Pompejanum during World War II.

After hiring a lawyer to facilitate the return of the 2,000-year-old bust to its rightful owners, Young’s lawyer brokered an agreement that included the San Antonio Museum of Art hosting the artwork until May 2023.[3]

A Florida architect stumbled across a stolen work from Jon Corbino at an estate sale in Sarasota. The painting, named Palette for the actual artist’s palette it was painted on, was one of several owned by the Van Wezel Performing Arts Hall from the same artist. Though it was not the most valuable, it was the most popular work in the collection. The painting hung in the lobby of the lower gallery of the hall and went missing during an Oak Ridge Boys concert in the early 1990s.

Eric Bower, the architect and weekend yard sale enthusiast, recognized Corbino’s piece when he spotted it. Having come across the works of famous painters at garage sales before, Bower purchased the piece for just $25 and made contact with the artist’s daughter, who informed him that Palette was a stolen work.

Bower returned the stolen painting to the performing arts hall, even refusing a reward. Though the location of the painting is no longer a mystery, the question of who took it still persists. According to the son of the estate from which Palette was purchased, his mother had stored several pieces of art for an unknown man who’d never retrieved them.[4]

Standing 16 feet tall and 33 feet long (4.8m x 10m), Josef Thorak’s bronze horses once stood on either side of the stairs leading into Adolf Hitler’s New Reich Chancellery in Berlin, Germany. The imposing sculpture disappeared with the Soviets during World War II, showing up in the 1950s in Eberswalde at a location used for the Red Army barracks’ sports grounds/ They had been painted gold to mask bullet holes. The horses disappeared again with the fall of the Berlin wall in 1989, with speculation being that the sculpture had been sold or the horses melted down.

In 2015, the horses were finally rediscovered after an investigation was launched when the sculpture was put on the black market with a reported price tag of $5.6 million. The story of the horses’ journey then unraveled. Shortly before the fall of the Berlin wall, Helmut Schumacher, a vintage car dealer, had discovered an article in which an art historian had noted her discovery of several bronze statues in Eberswalde, including Walking Horses. An intense, complicated smuggling operation ensued, with bribes sprinkled liberally and Red Army soldiers themselves assisting the smugglers.

Due to the horses’ sheer size, the sculpture had to be cut up in order to be smuggled to the Western side of Berlin, eventually ending up in possession of the man paying the bribes—a businessman by the name of Rainer Wolf. When Wolf’s property was searched in May 2015, investigators discovered not only Walking Horses but a number of other illicit Nazi artworks that were subsequently seized and turned over to the German government.[5]

AP correspondent Warren Levinson tells the story of Tres Personajes, a Mexican work of art that was

Plucked from a pile of garbage in Manhattan after noticing it during a morning walk, Elizabeth Gibson hung the oil painting titled Tres Personajes” by Rufino Tamayo on her wall before research led her to a segment on missing masterpieces on Antique Roadshow FYIs. The piece, considered an important work from Tamayo’s mature period, had been purchased from Sotheby’s auction house in 1977 for $55,000 as a gift from a husband to his wife. Ten years later, the painting, unique in that marble dust and sand were mixed into the medium, was stolen from a Houston warehouse where it was being stored during a move. Though the original owners reported the loss to both Houston and federal authorities, and the painting was listed in multiple databases, no leads turned up.

After learning the value of the oil painting, Gibson returned it to the original gift recipient, now widowed, and accepted a $15,000 reward. Gibson also received an undisclosed percentage of the painting’s $1,049,000 sale price when it was then sold through Sotheby’s New York auction house twenty years after the theft in 2007.[6] 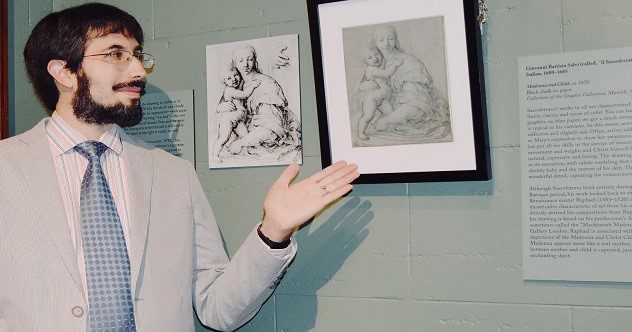 Most of the works of Italian artist Giovanni Battista Salvi, born in 1609 at Sassoferrato in the Marches, reside in the Royal Collection at Windsor Castle in Britain. So it was no surprise that when one of his drawings was donated to the Washington County Museum of Fine Arts in 2021, the museum staff was ecstatic. The rare, circa-1650 Baroque work had been purchased by John and Sylvie O’Brien in 1970 from an unknown French collector.

Fifty-one years later, the couple, unaware that the drawing had been listed as stolen since 1965, donated it to the museum. Though no one knows exactly when the Sassoferatto was stolen as it was discovered torn from its base by a student doing research at the Graphische Sammlung, employees of the Washington County Museum of Fine Art verified it was indeed the valuable drawing. It was due to be returned to its rightful museum in August 2022.[7] 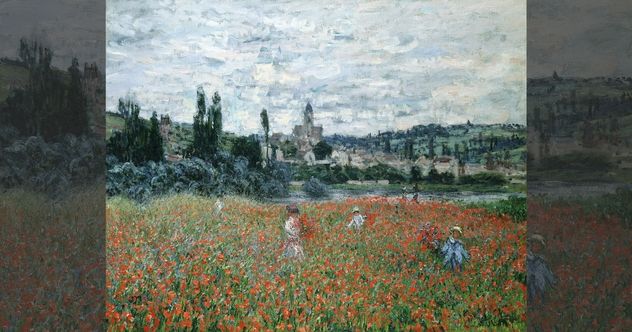 Claude Monet and Vincent van Gogh are unarguably two of the most well-known impressionist artists in the world, their works commanding millions of dollars at auction. They also tempt thieves, hoping to cash in on the black market.

On February 10, 2008, three masked, armed men made off with a $163.2-million haul from the private impressionist and neo-impressionist museum, the E.G. Buehrle Collection. In addition to Edgar Degas’s Ludovic Lepic and Boy in a Red Waistcoat by Paul Cezanne, the thieves grabbed Monet’s Poppy Field at Vetheuil and van Gogh’s Blooming Chestnut Branches. Though rather than being specifically targeted, authorities believe the thieves simply grabbed the first four works of art they came to.

In an unexpected twist, both the Monet and van Gogh were discovered only days later—still protected by the museum glass they were displayed under—in a sedan abandoned in front of a psychiatric hospital just a few feet from the Zurich museum. Eventually, all four paintings were recovered, and though little information is available on the 2009 recovery of the Degas works, Boy in a Red Waistcoat was found hidden in the roof upholstery of a black van in Belgrade, Serbia, in 2012.[8]

In July 1918, the Russian Imperial Family’s executions shocked the world. After their tragic demise, some of the family’s most extravagant possessions, the Fabergé Easter eggs, were confiscated from the Romanov palaces by the Bolsheviks and taken to the Kremlin Armoury. The eggs, created for the family from 1885 to 1916, were considered to be both the crowning achievement of Fabergé as well as the last great art commissions. They remained unopened in their storage crates until Joseph Stalin came into power and determined the valuable eggs could be sold to the Western world. Though some of the eggs were sold, others were hidden by Kremlin curators, and over time, the whereabouts of eight of the original 50 Imperial Easter Eggs became unknown.

One of those, the third Imperial egg, created in 1887 and considered missing since 1922, was discovered at a flea market stall by a scrap metal dealer in the midwest in 2004. Having paid more than the egg was worth as scrap, the yellow-gold Romanov treasure sat in the dealer’s cabinet for nearly a decade until research led him to suspect his flea market purchase could, in fact, be one of the missing Imperial Eggs. Once the origin of the golden bauble was confirmed, the Easter egg was sold to a private collector for a sum estimated to be around $33 million.[9]

Currently awaiting authentication is yet another of the lost Imperial Easter Eggs. After Russia invaded Ukraine in February 2022, Western countries imposed sanctions on Russian oligarchs. Found aboard a 348-foot (106-meter) superyacht seized in Fiji is what is believed to be one of the seven missing Imperial eggs. The discovery was revealed by Lisa Monaco, U.S. deputy attorney general, after the $300 million vessel owned by Suleiman Kerimov was docked in San Diego in June 2022. Once confirmed, only six Imperial Fabergé eggs will remain missing.[10]