Since bursting onto the scene in the early 2000s, Banksy has become one of the most talked about artists of our generation, exhibiting his own brand of art to both critical acclaim and plain old criticism. People all over the world have seen his work—if not on TV, then maybe in the streets and even the building they live in. Here are just a few of the interesting stories that have developed around this mysterious man. 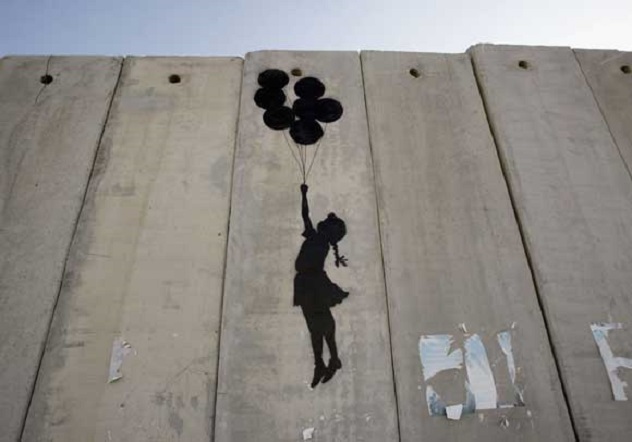 The West Bank Barrier is a monolithic wall that separates Israel from Palestine. It’s 684 kilometers (425 mi) long and three times larger than the Berlin wall. Due to the troubles in the Middle East and it’s own divisive nature, the West Bank Barrier is probably one of the most dangerous locations in the world—and in 2005, Banksy tagged it.

Both Israeli and Palestinian citizens woke up to find large murals painted on both sides of the wall. Despite the canvas Banksy used, most of the paintings weren’t as overly political as may be expected. Some depicted panoramic windows showing lush green pastures beyond. Others were playful, like two children escaping over the wall using a combination of balloons and ladders. How he managed to do it in an place where people are regularly shot to death is still a mystery, although Banksy’s spokeswoman claimed that he almost came under fire by security forces on more than one occasion during the work. 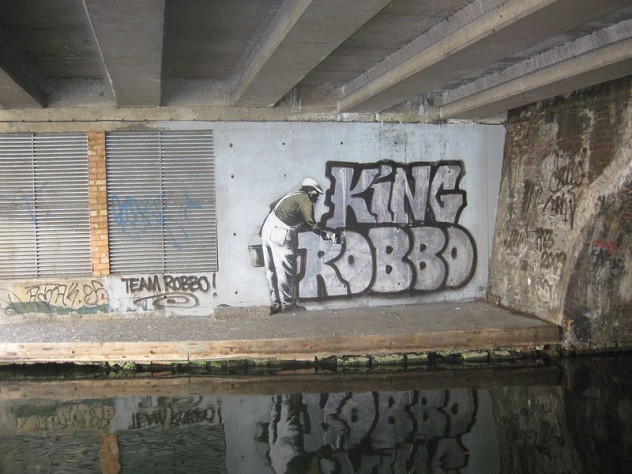 Graffiti long predates Banksy’s public acclaim, and one of London’s oldest and most well-known graffiti artists is a man called Robbo. For reasons unknown, London woke up one day to find that Banksy had doctored one of Robbo’s tags—a piece dating back to 1985. Now, instead of saying “ROBBO,” the image of a council worker appeared holding a brush and painting the wall black.

This prompted the original artist, now in his late thirties or early forties, to come out of hiding. Robbo retaliated by portraying Banksy’s council worker as painting the words “KING ROBBO.” Banksy upped the ante by painting the letters “FU” in front of “KING ROBBO.” This back and forth went on for the better part of two years until Robbo sustained a serious head injury that prevented him from participating any further. Banksy conceded victory and replaced his version with Robbo’s original tag.

8 The Elephant In The Room 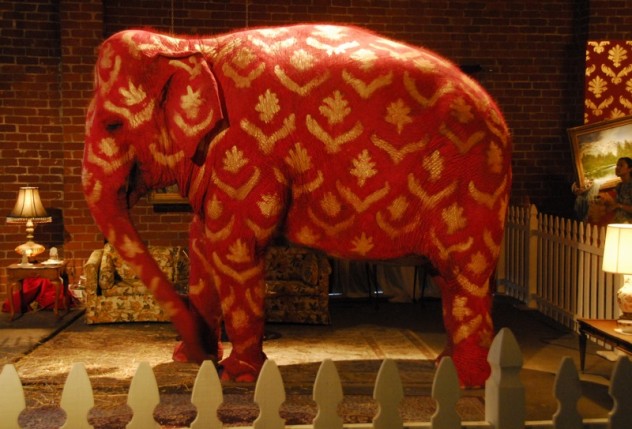 Banksy’s first exhibition in LA was a wild success, attended by the hottest celebrities around. One of his pieces at this exhibition was titled “The Elephant in The Room.” It included an actual Indian elephant that was entirely spray-painted—with non-toxic paint—to have the same pattern as the surrounding wallpaper. The elephant was supposed to symbolize all the world’s poverty or something.

Weirdly enough, Banksy had somehow managed to get permission to do this by LA’s animal services department, who had consulted with the office of the city attorney. When the actual exhibit went ahead, most animal rights activists strongly objected to such flippant treatment of an elephant, concerned that the animal was in pain and may endure lasting health consequences. However, it was too late to stop the exhibit, as the display was mostly over. 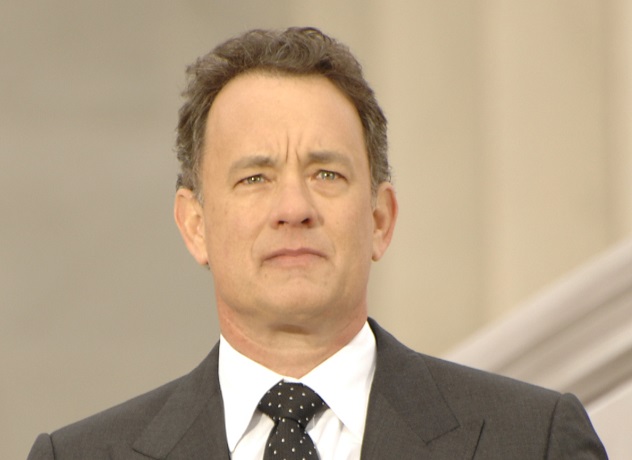 Banksy has mostly been adopted into the mainstream. His work is showcased in art galleries and he even does the odd TV spot. It’s this sort of fame that has earned him imitators, one of the most hilarious of which is Hansky.

Hanksy is a street artist based in New York who paints in the style of Banksy with one subtle difference—all of his work revolves around the actor Tom Hanks. If Hanksy paints one of Banksy’s famous rats, it has Tom Hank’s face. If Hanksy paints Banksy’s famous image of the protestor throwing a bouquet of flowers, it’s Tom Hanks throwing Wilson the volleyball from Castaway. Hanksy doesn’t simply limit himself to Tom Hanks, though. He also covers a plethora of other well-known actors and pop culture icons, which can be viewed on his website. 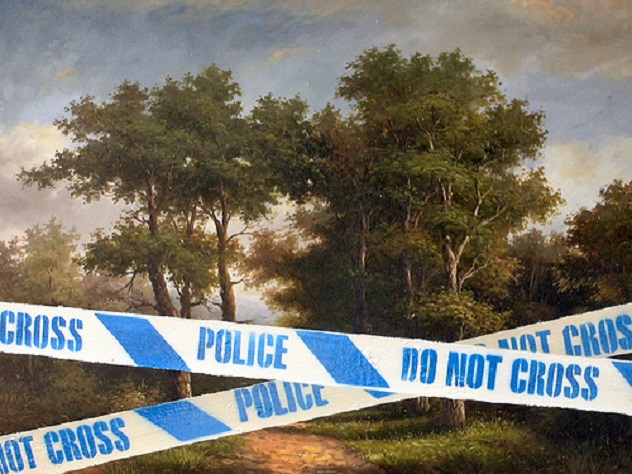 Shortly before Banksy was being invited to art galleries as a legitimate artist, he had another way to exhibit his work to the general public—besides spray-painting it on walls—that would make the Joker wonder why he hadn’t thought of it first. In 2003, Banksy visited the Tate Britain art gallery in London. While in disguise, he glued one of his own paintings to the wall, where it remained unnoticed for hours before the glue dried and it fell off the wall. It was an oil painting of a country house surrounded by police tape with an accompanying note explaining that the country had become numb to crime due to press coverage.

He later repeated the same trick in the British Museum, hanging a fake cave painting showing a caveman pushing a shopping trolley, complete with a fake sign that read “This finely preserved example of primitive art dates from the Post-Catatonic era.” This time the piece hung for at least two days before anyone noticed and took it down. A few years later, Banksy used the same trick in New York, sneaking works into the Metropolitan Museum of Art, the Museum of Modern Art, the American Museum of Natural History, and the Brooklyn Museum. 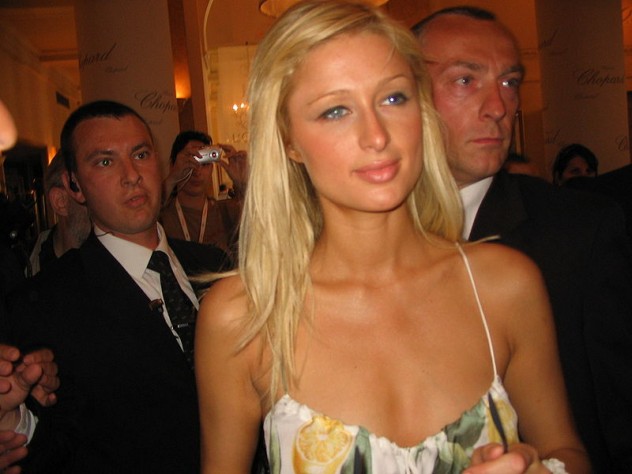 In 2006, Paris Hilton’s debut album went on sale in the UK—but anyone with enough interest in her singing career to buy one was in for a nasty shock. Banksy had shop-dropped 500 versions of his own doctored copies across the country. “Shop-dropping” is a term that describes the opposite of shoplifting: putting your own unofficial merchandise into shops for unwitting shoppers to then buy. In Banksy’s version, the music had been replaced with a basic rhythm and a looping sample of Paris Hilton randomly exclaiming “That’s hot!” The song titles on the back of the CDs were changed to questions like “Why am I famous?” and “What am I for?”

The artwork had been digitally changed as well. The front cover now showed a picture of Paris Hilton baring her breasts, her own famous face replaced with a dog’s. The leaflet inside contained pictures of Paris stepping out of a limo and into a group of homeless people, or alternately, as a mannequin under a sign that read “Thou shalt not worship false idols.” 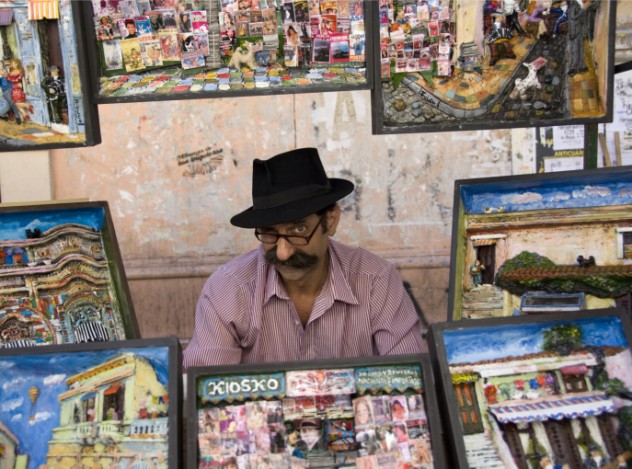 In October this year, an elderly man set up a stall in Central Park and began selling Banksy prints for $60 a pop. Most people ignored the stall as the man sat around drinking coffee and eating sandwiches. They probably assumed that, as Banksy was touring the city, the prints were overpriced cash-ins for gullible tourists.

However, the thousands of people who passed the elderly man selling prints that day were blissfully unaware that each painting was a completely original authentic Banksy worth $30,000. At the end of the day, the old man had made less than $500. Unluckily for us, Banksy has said that there won’t be any more stalls selling cut-price originals, so the next time you see an old man selling paintings, they probably won’t be priceless pieces of art. 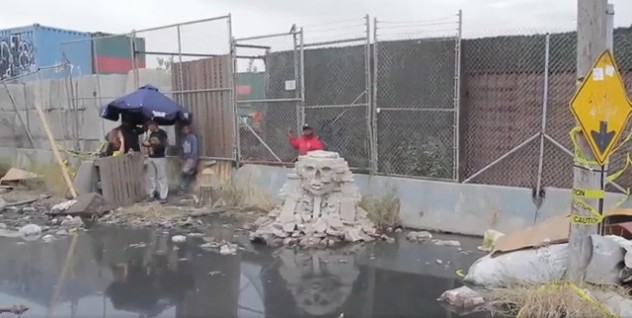 The vast majority of Banksy’s art is exhibited in public spaces—on the sides of buildings, sidewalks, under bridges, etc. This means that, due to each piece’s value, they are very susceptible to theft. One such theft occurred in New York recently, when a replica of an Egyptian sphinx made from smashed cinder blocks was loaded onto a truck by locals in Queens and never seen again. One of the locals was later said to have been offered money by a big art gallery to do this.

Another piece was stolen off the wall of a shop in North London. The thieves actually managed to cut away the piece of wall it was painted on. The next time it popped up was in an auction by a private collector in the US.

The thievery and vandalism of Banksy’s works has become so widespread that one business owner in NYC has hired an armed guard to stand vigil over the Banksy on the side of his building. Meanwhile, in the UK, Banksy paintings are usually preserved under perspex glass to protect them from thieves and vandals. Ironically, the people ordered to do this are the ones usually painting over such paintings—graffiti removal teams.

2 Ronald McDonald And The Shoeshine Man 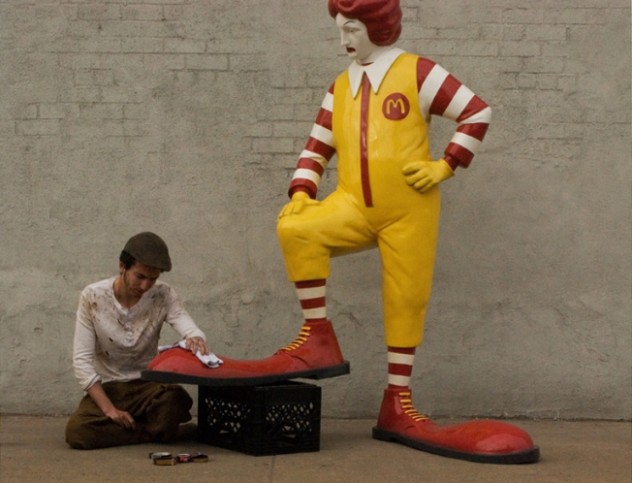 In one of Banksy’s latest pieces, he’s decided to criticize the restaurant chain McDonald’s. A large sculpture of Ronald McDonald adorned with an angry scowl and oversized shoes traveled through New York, moving to a new McDonald’s every day accompanied by a disheveled, human shoe-shine boy. The man who continuously shined the Ronald sculpture’s clown shoes reportedly responded to all queries with “Sorry, no English!”

Luckily, for people who struggle to understand why there would be a giant Ronald Mcdonald traveling around New York with a shoe shine boy who doesn’t speak English, Banksy set up an automated 1-800 number that explains the work. According to the recording callers heard, “Ronald [is] arguably the most sculpted figure in history after Christ” and his sculpture is “a critique of the heavy labor required to sustain the polished image of a mega-corporation.” 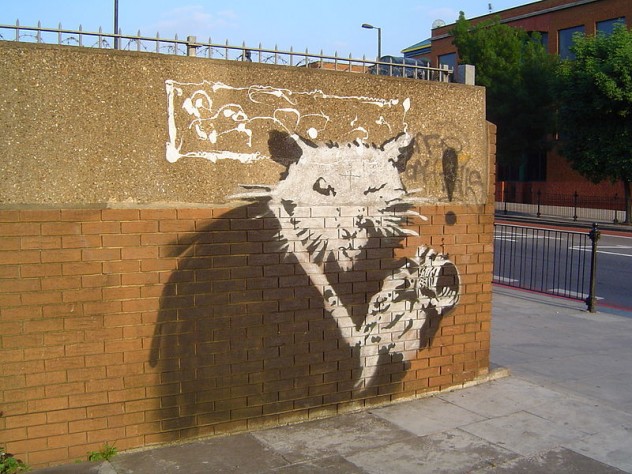 Despite Banksy’s fame. nobody knows with any real certainty who he really is—or even if he is a “he.” He has conducted interviews wearing a mask, where he’s claimed to be an unemployed art school drop-out painter decorator. Others have claimed that there is no real Banksy, just an art collective. Still others have claimed that he is the controversial artist Damien Hirst’s alter ego.

However, it should be noted that there is a more probable suspect. Multiple news sources have pointed the finger at Robin Cunningham, a 39-year-old artist who has been pictured more than once around Banksy works. This would be unremarkable if it weren’t for the fact that he is usually spotted just before they go up, and is usually carrying spray paint or helping to build scaffolding. Banksy’s team has neither confirmed nor denied any of these claims, so we’ll just have to keep guessing.

Aaron has written for Cracked, Knowledge Nuts, and Listverse. Join him on Twitter.