Spirits and spirits go hand-in-hand when so many ghost stories get chalked up to people being under the influence. Perhaps it’s due to an ironic twist or the fact that these places often give away free samples, but there are a plethora of places where alcohol gets brewed that also have a ghost story attached to their lore.

This list will cover ten different beer breweries, liquor distilleries, and vineyards from North America and Europe that claim to have poltergeists sticking around to sample their ports, porters, and pastis. After all, the world has a rich history that flips back and forth from prohibition to sheer bacchanalia, so it should come as no surprise that a few particularly dramatic events should occur at these places that might lay the groundwork for a ghost story.

10 The Winery at Marjim Manor

The historic Marjim Manor, located just off the coast of Lake Ontario in Upstate New York, was transformed into a winery in 2003 by entrepreneur Margo Sue Bittner, who also uses it as a bed and breakfast. The 21st century is hardly when this magnificent manor began its history, however. The property was first purchased in 1834 by Schudal Scutter Merritt, who later built the stately brick home in 1854.

Rumor has it that Merrit, his wife, son, and a plethora of other denizens throughout the years couldn’t bear to leave the beauty of the place, even after death. Ghost investigators and even the current owner report signs of paranormal activity pretty regularly. Examples include electrical equipment malfunctioning, objects getting knocked over out of nowhere, and sightings of the ethereal Merrit family wandering the grounds. Some have even reported witnessing a ghostly dog prowling about. [1] 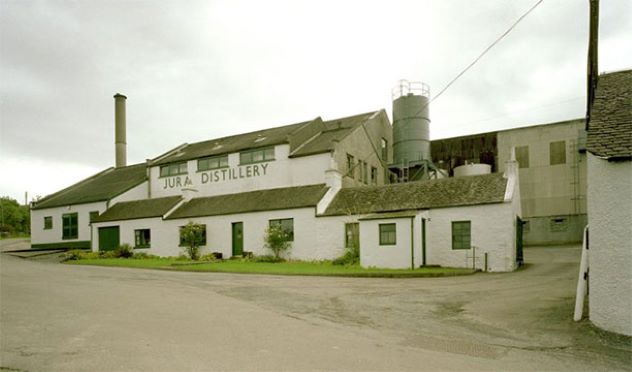 The Scottish Jura Island can be found on the same longitude as Glasgow, and one of its largest villages, Craighouse, can only claim a population of just over two hundred. That being said, the famous Jura Single Malt Scottish Whisky distillery can be found in Craighouse, and their fine spirits are found in stores across the world. Alcohol wasn’t always freely brewed on the island, however, and a certain pro-prohibition politician by the name of Laird Archibald Campbell would play host to ghosts one night as a result.

In 1781, the Laird claimed that a ghostly woman visited his bedside one night and demanded that booze be once again brewed on the island. A year later, Campbell opened up a distillery himself. Superstition is a powerful thing. The 1700s aren’t the only source of ghostly activity, however, and it is claimed that the spirit of an old schoolteacher named Elizabeth floats around the grounds of the distillery.[2]

Denver, Colorado, is where this next wraith dwells. The Wynkoop Brewery finds itself operating out of a 125-year-old building filled with old, turn-of-the-century architecture and even a few hidden tunnels. One would be mistaken for thinking the original building was a speakeasy. However, the building was originally a simple mercantile that connected the tunnels to the train station in order to move supplies.

Though the building lacks prohibition chicanery, it certainly doesn’t lack in spirits. Strange noises, apparitions, and ethereal wandering hands haunt those who venture into the basement. A lot of men even report getting their legs squeezed in the men’s bathroom. Though the main brewery floor also has its share of hauntings, namely from the ghost of a lady dressed in red. The proprietors of Denver’s first craft brewery have often invited paranormal investigators and even started hosting tours for the public.[3] 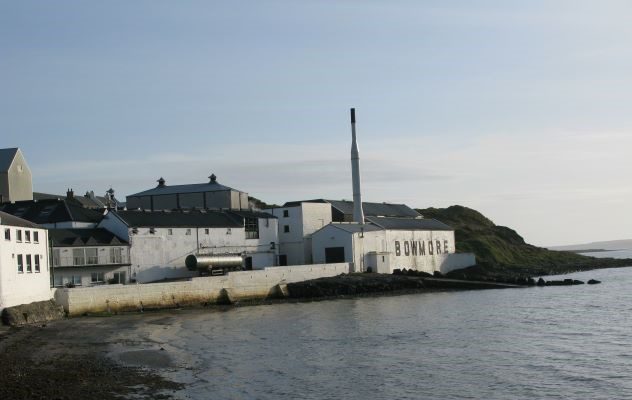 With a variation of whisky literally being named “Scotch,” it should come as no surprise that Scotland once again makes an appearance on this list. And in fact, the next entry on the list, the Bowmore Brewery, can be found on the Isle of Islay, directly south of Jura Island. Though the Bowmore Brewery was also founded in the 1700s, their resident ghost shares similarities to the infamous haunt at Sleepy Hollow by merit of also being a headless horseman.

Legend has it that one night, a crofter named Lachlan Bàn was returning from his work at the farm to witness the shadow of a headless equestrian galloping away from his home. Despite lacking a mouth, the spirit did seem to leave behind an open bottle of whisky from the Bowmore Distillery before taking off into the night. To make matters more ominous, Bàn’s brother would report that their father had recently passed and only wished that he could somehow share one last dram of scotch with his son. People still report headless horseman sightings, in addition to other spirits, to this day.[4]

The Spirits of Moon River Brewing

Nestled up against the border of South Carolina and the great Atlantic Ocean lies the idyllic Georgian metropolis of Savannah. This seaside city is the site of the Moon River Brewing Company, which just so happens to be the site of a haunting. Though the building’s stint as a beer brewery only began in 1999, the building first started its life as a hotel in 1821. In 1851, the building even housed a live lion exhibit, if that’s any indicator of how high class the establishment endeavored to become.

Though a far cry from a big cat enclosure, the brewery does offer a ghost tour in contemporary times. And indeed, the establishment boasts a few examples of paranormal activity, including the ghost of an unlucky gambler getting shot by a particularly accurate doctor, as well as the ghosts of yellow fever victims who perished during the building’s temporary stint as a hospital. A spirit colloquially named “Toby” is even said to brush up against and even push people who visit the brewery.[5] 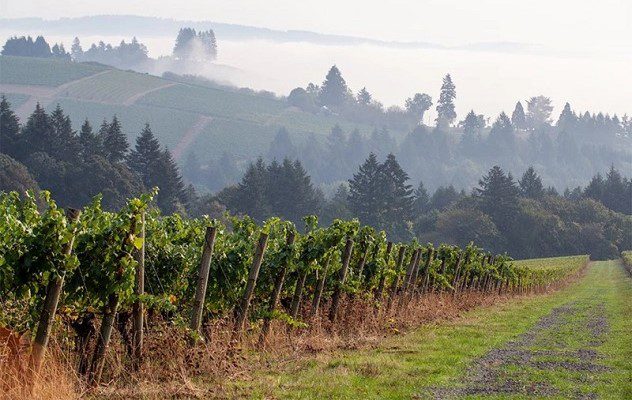 Sommeliers often swear that Napa Valley wines in California are absolutely good enough to die for. Sometimes, this is interpreted literally. The Franco-Swiss winery, later renamed the Mansfield Winery, would be first established in 1876. However, a decade later, a worker by the name of Louis Murback would try a different career—that of a bandit. Having stolen from the company, Murback was naturally fired on the spot, yet still, the man felt as though he was slighted.

As a result, the man would get thoroughly drunk, on wine no less, purchase a gun, and exact his revenge on the winery owner’s nephew. It is said that the vintner’s nephew, a man by the name of Jules Millet, wanders the property grounds as a spirit nowadays. He seems to have an intense hatred for lighting fixtures, and it is claimed that the owners have witnessed light bulbs, a flashlight, and even a lava lamp randomly explode after hearing disembodied, ghostly noises.[6]

4 The Haunch of Venison

Boasting a reputation for having been operating for 700 years, it would be foolish not to claim that the English pub and brewery known as the Haunch of Venison wasn’t at least a little haunted. Located in the city of Salisbury, the Haunch of Venison allegedly also houses dozens of ghosts, at least. So many different ghostly occurrences have frightened and entertained the pub’s guests that it would be impossible to list all of them.

Highlights, however, include knives floating around and standing on end, glassware floating around before getting smashed, the mummified hand of an unlucky gambler disappearing and reappearing in random corners, and even the ghost of Winston Churchill making the rounds. There are apparently so many different spirits haunting the locale that no one has ever made an effort to count them. One can assume there are at least more than thirty.[7]

Haunted Distilleries | Buffalo Trace and the Haunting of Albert B. Blanton

The reputation that bourbon whiskey from Kentucky boasts is certainly well-founded, and one of Kentucky’s most famous bourbon distilleries is also one of the entire nation’s oldest. Located in the state capital of Frankfurt, the Buffalo Trace Distillery has a long, rich history that starts with its official founding in 1792. The business was even successful enough to get a special permit to make whiskey during the height of the prohibition era; it was claimed that the bourbon was “medicinal.”

It is said that the former company president, a man by the name of Colonel Albert B. Blanton, is hellbent on making sure that the distillery’s quality is still airtight. The ghost of the man is routinely witnessed stalking the actual distillery warehouse. Lights flicker, and ethereal footsteps are often reported. Though to elevate the haunting past run-of-the-mill ghost behavior, people will sometimes report hearing pieces of advice regarding brewing from behind them without anyone being present.[8]

Le Château de Brissac is a magnificent, Baroque estate that lies due south of the French city of Angers. It is also, interestingly enough, the tallest château in France. The property, originally built by the Counts of Anjou in the 11th century, is owned and maintained by Charles-André de Cossé-Brissac, the 14th Duke of Brissac, who also uses the grounds as a vineyard.

Though originally built as a straight-up Medieval castle, the estate underwent a major renovation in the 15th century, the same century in which a double murder was committed on the property. Charlotte de Brézé had an affair, which drew the ire of her noble husband, Jacques de Brézé, who, in a fit of rage, murdered the two adulterers. To this day, a spirit known as the Green Lady floats throughout the château, believed to be Charlotte herself. She appears beautifully dressed until one can get a closer look to see the ghost of a shambling, eyeless corpse.[9] 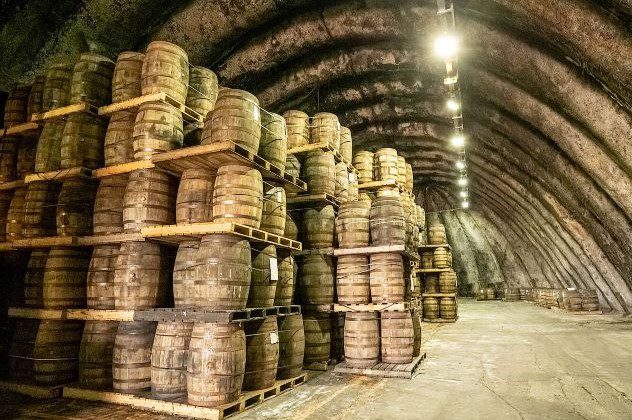 Kilbeggan Distillery is Ireland’s oldest continuously operating whiskey distillery. Its career has lasted several centuries, having been first founded by Matthias McManus in 1757, and its wares have been sold globally. However, this record was put to the test by Irish prohibition movements in the 18th and 19th centuries, such as the Distilling Act and the Temperance Movement. This prompted a dramatic history of underground brewing, bootlegging, and even a few whiskey rationing laws in the 1900s due to food shortages.

Nevertheless, the distillery is massively successful, even in modern times. Not to be outdone by the drama of actual history itself, however, many dramatic claims of poltergeist activity are regularly reported on the grounds. The ominous, black-robed ghost of a monk frightens guests. Matthias McManus himself has been witnessed wandering the distillery, as well as his son John. After all, McManus’s son’s death was by no means peaceful. He was executed in 1798 for participating in the United Irishman’s rebellion.[10]