WARNING: Some adult and shocking content is featured here. This article shows some of the most bizarre art in modern history. Art has progressed well past the concept of recognisable structures to completely outlandish (and often nightmarish) images. Seeing is believing, so here is the list:

10The Physical Impossibility of Death in the Mind of Someone Living 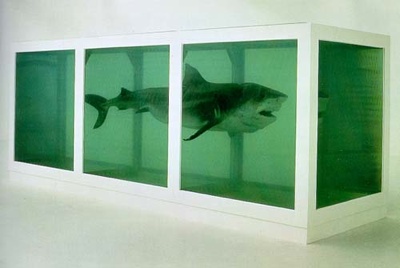 Damien Hirst (born June 7, 1965) is an English artist and the most prominent of the group that has been dubbed “Young British Artists” (or YBAs). He dominated the art scene in Britain during the 1990s and is internationally renowned. Death is a central theme in his work. He is best known for his Natural History series, in which dead animals (such as a shark, a sheep or a cow) are preserved, sometimes cut-up, in formaldehyde.

His iconic work is The Physical Impossibility of Death in the Mind of Someone Living, a 14-foot tiger shark immersed in formaldehyde in a vitrine. Its sale in 2004 made him the second most expensive living artist after Jasper Johns. In June 2007, Hirst became the most expensive living artist with the sale of a medicine chest, Lullaby Spring, for £9.65 million at Sotheby’s in London.

Bring some art into your own home with this Canvas Four Panel African Print at Amazon.com! 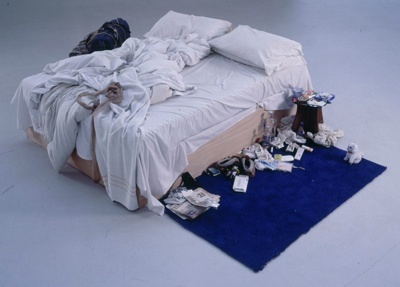 Tracey Emin RA (born 3 July 1963) is an English artist of Turkish Cypriot origin, one of the group known as Britartists or YBAs (Young British Artists). She has succeeded in equalling, if not surpassing, Damien Hirst among the YBAs in terms of notoriety among the general public.

A drunken outburst on a Channel 4 TV discussion, and My Bed — an installation in the 1999 Turner Prize exhibition, consisting of her own unmade dirty bed with used condoms and blood-stained underwear — both caused a media furore.

Gilbert Prousch (or Proesch) (born in San Martin (San Martino), Italy, September 11, 1943) and George Passmore (born in Devon, England January 8, 1942), better known as Gilbert & George, are artists. They have worked almost exclusively as a pair. The two first met on 25th September 1967 while studying sculpture at St Martins School of Art, now Central Saint Martins College of Art and Design, one of six colleges in the University of the Arts, London.

They were initially known as performance artists. While still students they made The Singing Sculpture (1970), for which they covered themselves in gold metallic paint, stood on a table, and mimed to a recording of Flanagan and Allen’s song “Underneath the Arches”, sometimes for hours at a time. 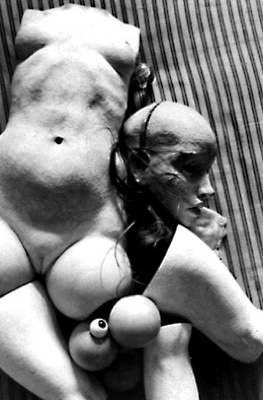 Hans Bellmer (1902 Kattowitz, Silesia – 23 February 1975 Paris, France) was an artist, best known for the life-sized pubescent female dolls he produced in the mid-1930s. He is also commonly thought of, in the art world, as a Surrealist photographer. Since 1926 he had been working as a draftsman for his own advertising company. He initiated his doll project to oppose the fascism of the Nazi Party by declaring that he would make no work that would support the German state.

Bellmer’s doll developed from a series of three events in his personal life: meeting a beautiful teenage cousin in 1932; attending a performance of Jacques Offenbach’s Tales of Hoffmann (in which a man falls tragically in love with an automaton); and receiving a box of his old toys. After these events he began to construct his first doll. 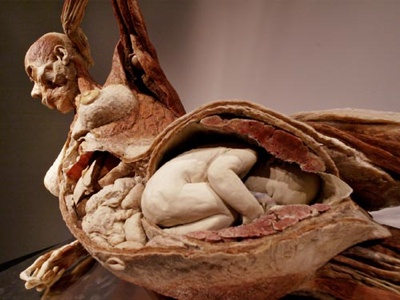 Gunther von Hagens (b. Gunther Liebchen, January 10, 1945) is a controversial German anatomist who invented the plastination technique to preserve specimens and is heavily involved in its promotion. He developed the Body Worlds exhibition of human bodies and body parts. Von Hagens has a distinct German accent, and wears a black hat during his instructional cadaver dissection videos.

In January 2004, the German news magazine Der Spiegel reported that von Hagens had acquired some corpses from executed prisoners in China; he countered that he did not know the origin of the bodies and went on to cremate several of the disputed cadavers. German prosecutors declined to press charges, and Von Hagens was granted an interim injunction against Der Spiegel in March 2005, preventing the magazine from claiming that Body Worlds contain the bodies of executed prisoners. 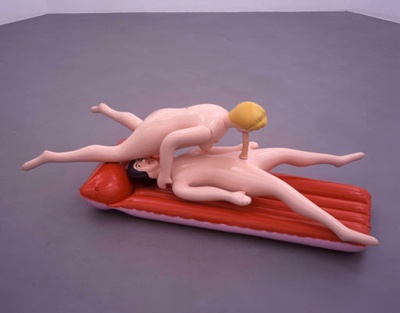 Jake Chapman (born 1966) and Dinos Chapman (born 1962) are brothers and English conceptual artists who work almost exclusively in collaboration with each other. They came to prominence as part of the Young British Artists movement promoted by Charles Saatchi. In their early career they worked as assistants to Gilbert and George.

The Chapman brothers were nominated for the Turner Prize in 2003. As well as including Insult to Injury, their Turner Prize exhibit debuted two new works Sex and Death. Sex directly referenced their previous work Great Deeds against the Dead. The original work shows three dismembered corpses hanging from a tree, Sex shows the same scenario, but in a heightened state of decay. 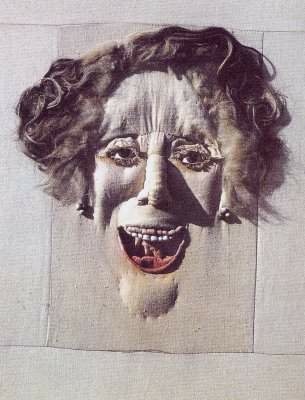 Clare Shenstone completed her MA at the Royal College of Art in 1979. She was told that a ‘distinguished visitor’ had been looking at her degree show and left his telephone number. She phoned: it was Francis Bacon, who said ‘I love your work’. He wanted to by a particular piece titled ‘Janet’, this had been the artist’s first attempt at what she calls ‘cloth heads’.

Over the following two years she spent a lot of time with Bacon, making over fifty oil, gouache, pastel and pencil sketches of him. Since then Clare has exhibited widely across London and completed numerous other notable commissions including portraits of Zöe Wanamaker, Ronald Harwood and David Bowie. 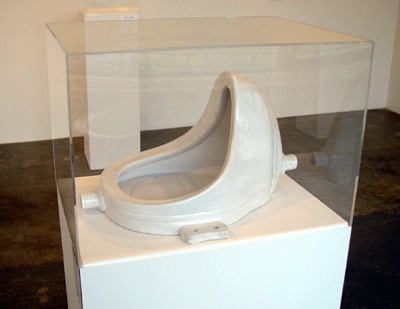 Fountain is a 1917 work by Marcel Duchamp. It is one of the pieces which he called readymades (also known as found art), because he made use of an already existing object—in this case a urinal, which he titled Fountain and signed R. Mutt. Marcel Duchamp had arrived in the United States less than two years previous to the “creation” of Fountain, and had become involved with Dada, an anti-rational, anti-art cultural movement, in New York City.

Like the use of the word “Dada” for the art movement, the meaning (if any) and intention of the signature “R. Mutt” is difficult to pin down precisely. Mutt and Jeff was a popular contemporary comic strip. It is not clear whether Duchamp had in mind the German “armut” (meaning poverty), but he did state that the initial “R” stood for “Richard”, which is slang in French for “moneybags”. It is also suggested that R. Mutt is a play off R. Mott, the company that produced the Paris sewer pipes.

Get inside the head of this modern artist with Marcel Duchamp: The Afternoon Interviews at Amazon.com! 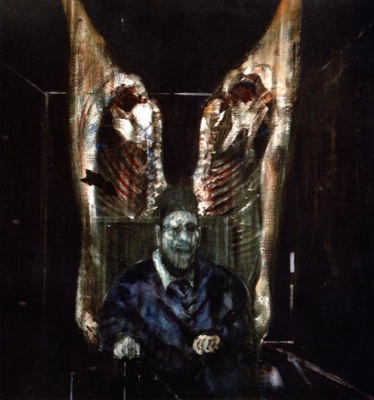 Francis Bacon (28 October 1909 – 28 April 1992) was a gay Irish figurative painter. He was a collateral descendant of the Elizabethan philosopher Francis Bacon. His artwork is well known for its bold, austere, and often grotesque or nightmarish imagery. The philosopher Gilles Deleuze has contributed greatly to the interpretation of Bacon’s work.

This work, Completed, and delivered to the Beaux-Arts gallery in February 1953, of “Study after Velázquez’s Portrait of Pope Innocent X” (1953), Bacon said “I wanted to paint a head as if folded in on itself, like the folds of a curtain”. The Titian Portrait of Cardinal Filippo Archinto (c.1551-1562) is often cited as an ancestor to this device. 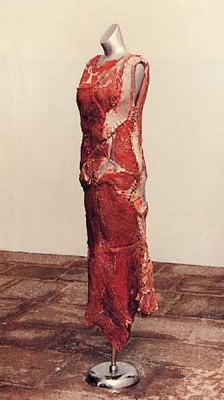 Jana Sterbak (born 1955) is a Canadian artist best known for her works constructed from meat. Two sculptures, Vanitas: Flesh Dress for an Albino Anorectic (1987) and Chair Apollinaire (1999), were both works whose primary medium was cured flank steak.

Sterbak’s works deal primarily with issues of power, sexuality, and control, and she also explores the relationship between humanity and the technology it has created. Her Standard Lives – Abridged was displayed in the centre of Newcastle-upon-Tyne in September-October 1990.